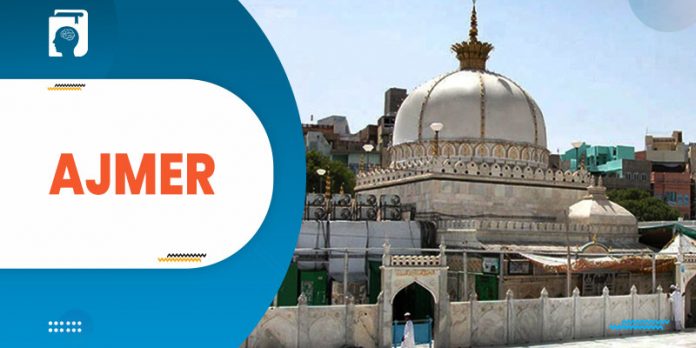 Ajmer, an emerald oasis in the state of Rajasthan, is located in a valley surrounded by the ancient Aravalli Range. Ajmer was named after Ajay Meru, which means “Invincible Mountain” and refers to the Taragarh hill on which Ajmer is located. It is a historic city supported by the Indian government’s Yojana Scheme. It is located west of Jaipur. Ajmer Sharif and Adhai Din ka Jhonpra are prominent tourist destinations in Ajmer. Ajmer is a famous tourist destination, as well as a Hindu and Muslim pilgrimage destination. Khwaja Moinuddin Hasan Chisti’s final resting place is frequented by Muslims from all over the world; in fact, the Dargah is venerated equally by Hindus and Muslims.

When Should one go to Ajmer?

The optimum time to visit Ajmer is from October to March, which includes the monsoon and winter seasons. Unlike the sweltering heat of summer in April and June, the weather is lovely. As a result, summer is a no-go unless you intend to travel during the “Ur” months, which are May and June. During the Monsoon season, the city is lush green and pleasant, with scenic surroundings. The majority of festivities, both religious and cultural, take place in October and November, making it a great time to visit Ajmer.

How to Reach Ajmer?

One can reach Ajmer in several ways. Plan or choose your options calmly because how we start plays a crucial role in our feelings throughout the trip.

Car: Ajmer is one of Rajasthan’s main cities. The roads are well connected to the major highways. Buses, taxis, and cars are available throughout the city.

Train: The Ajmer Railway Station is a significant Indian railway station that is easily accessible. All the major trains halt here. One of the regular superfast trains that come here from Delhi is the Delhi-Ajmer Shatabdi.

Bus: Ajmer is well-connected by bus to all the major cities of Rajasthan. RSRTC buses run to Ajmer from Jaipur, Delhi, and Ahmedabad.

Train: The railway station in Ajmer Junction is on the Mumbai-Ahmedabad-Jaipur-Delhi route. It connects Ajmer to all important cities in India. To go to the desired hotel or anywhere else in the city, you may take a cab or an auto-rickshaw from the railway station.

Ajmer public transportation: Autos and taxis are readily available around the city. Shared vehicles may be accessed virtually anywhere. A ride to Pushkar will likewise be easy to find.

Stay like a Royalty at Jagat Palace. While there are several nice hotels in Ajmer near Dargah, staying at the Jagat Palace provides a regal experience. It starts around Rs. 5000. Consider the Mansingh Palace (it has an additional bar, where one may enjoy nightlife). There are all kinds of hotels and resorts of all budgets available. Check out prices, discount codes beforehand.

Ajmer is surrounded by temples, and even if you’re not religious, seeing them is a must. 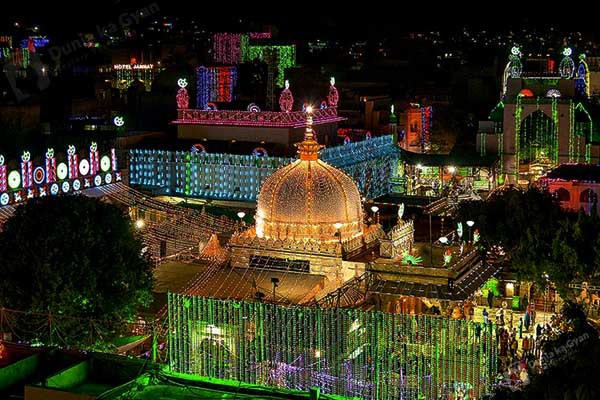 This famous shrine, constructed by Mughal Emperor Humayun, has a succession of massive doors with exquisite carvings as you approach the Dargah. All of these doors are made of pure silver, and the exquisite carvings are a sight to behold. In the courtyard, you can see the marble-carved grave of the holy saint Moinuddin Chishti. The top of the Dargah is gold-plated, and it is defended by a railing constructed of pure silver and marble. Over 33 Quranic passages and Allah’s 99 holy names have been artistically engraved on the Jama Masjid, making it a visual feast.

The Ajmer Sharif Dargah is located on the famous Taragarh Hill. It has many white marble structures surrounding the two courtyards and a large gate provided by the Nizam of Hyderabad and the Akbari Mosque that the renowned Mughal Emperor Shah Jahan built.

The principal gate to the shrine, Nizam Gate, is succeeded by the Shahjahani Gate. Following this gate is the Buland Darwaza, where the ‘urs’ flag is raised to signal the start of Moinuddin Chishti’s death anniversary rites. On the 6th and 7th days of Rajab, the ‘urs’ for the Sufi saint Moinuddin Chishti is celebrated every year. The current Spiritual Head of the Ajmer Dargah shrine is Syed Zainul Abedin.

Tabarruk is a morning benediction. During the night, a large amount of food is made and distributed to the people in the form of Tabarruk inside the Dargah. 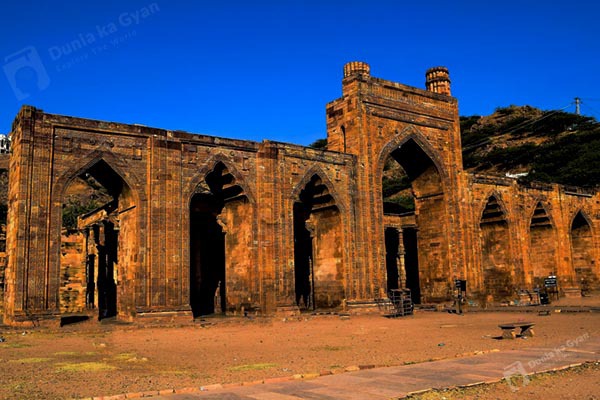 This historic mosque, located in the Rajasthan city of Ajmer, displays a beautiful blend of Indo-Islamic architecture and has been decorated with calligraphic inscriptions since it was erected. 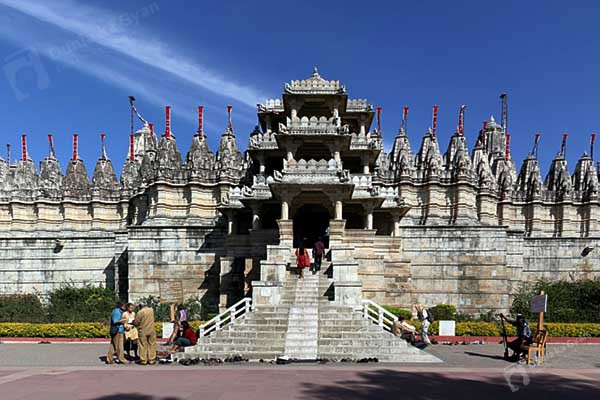 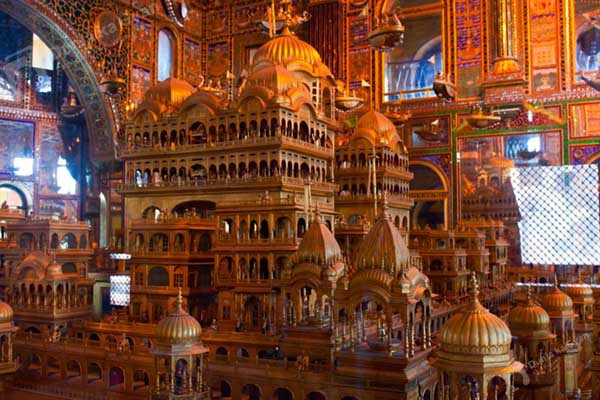 This late-nineteenth-century temple will take your breath away with its magnificent gold construction and exquisite sculptures representing Jain mythology themes. The shrine honors the first Tirthankara and is included in Kurt Titze’s book “Jainism: A Pictorial Guide to the Religion of Non-violence”. It is a must-see for history and architectural buffs. 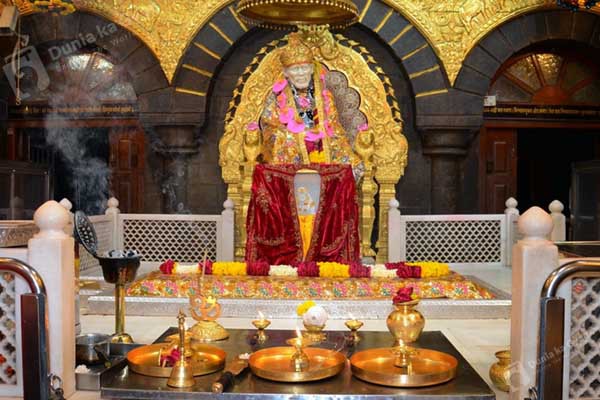 Sai Baba Mandir, one of the most contemporary architectural works, is made of the finest kind of marble, and being transparent by nature, enables light to travel through it. This unusually lovely temple is located in Ajay Nagar on a plot of 5 bighas (more than 2 acres) and is 5 kilometers from Ajmer’s railway station.

The Sai Baba Mandir is open from 5:00 a.m. to 8:00 p.m. Everyone is given shelter here, and Sai Baba’s devotees often devote a significant portion of their time here.

There are several things to do in Ajmer, and we can attest to that whether it’s simply relaxing by the lake or learning about the city’s history, or simply sitting idly enjoying the sight. 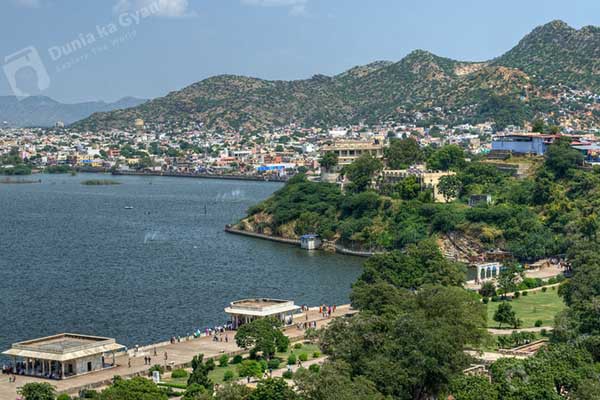 With a renowned tourist destination like Ana Sagar Lake, you won’t have to worry about “what to do in Ajmer”. This man-made lake provides stunning views of the city and exudes compelling energy. While you may simply relax and enjoy the tranquility here, boating is an experience you should not pass up if you want to experience the greatest things to do in Ajmer.

Entry Fees: The lake is free to enter; however, the boating fee is INR 160 per person. 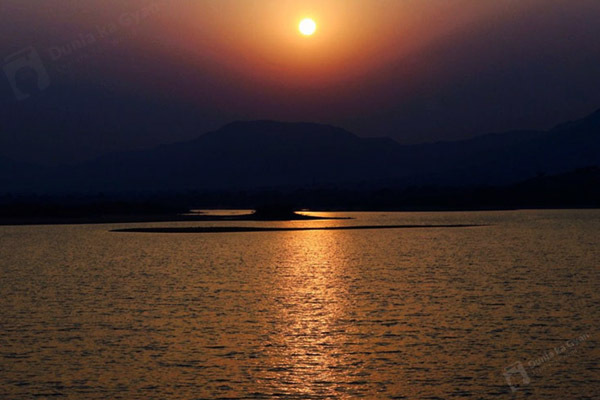 This lake, built-in in 1892 by an English engineer named Mr. Foy, is one of the major tourist attractions in Ajmer. It not only provides a breathtaking view of the Aravallis but also allows you to see a spectacular sunset every evening. You may spend a relaxing evening here and take some stunning photographs to take home as memories.

Entry Fees: There is no fee to visit this lake.

Ajmer, with its rich history, has a variety of places to boast about. Let’s have a look at them. 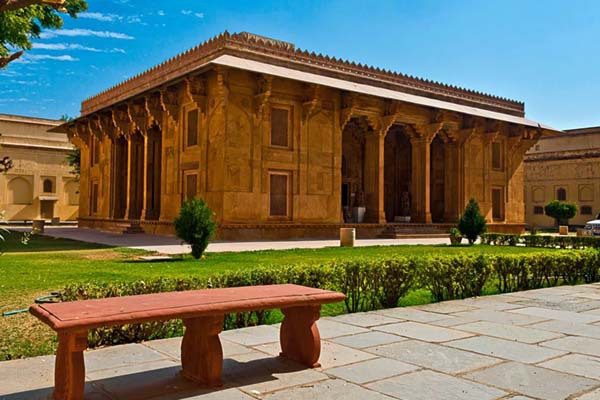 The legendary Mughal Emperor Akbar erected a fortified palace at Ajmer to keep an eye on neighboring monarchs and serve as a royal retreat. Aside from its spectacular architecture and the black marble statue of Goddess Kali, the palace is famous for its museums, which include the Ajmer Government Museum, Archaeological Museum, and Bharatpur Museum.

Many people still refer to this location as “Magazine” since it operated as an armaments magazine during the British administration of India. Archaeological artifacts, beautiful sculptures, paintings, inscriptions, and other intriguing objects are on show at this museum. 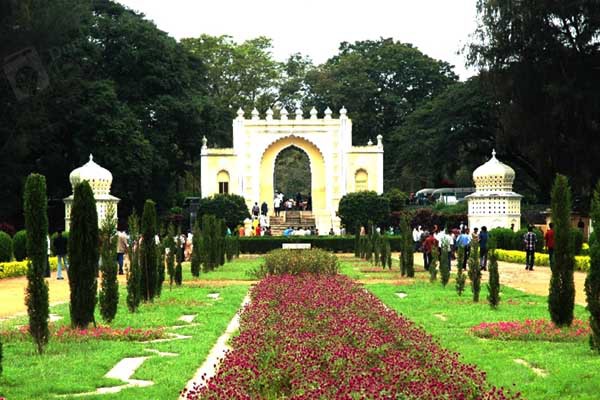 Visit the lovely Daulat Bagh, next to the famed Ana Sagar Lake. It is a fantastic spot to come for any wildlife lover or photographer. You may spend a relaxing evening wandering across the garden’s vast green lawn.

Entry Fees: There is no fee charged to visit this garden. 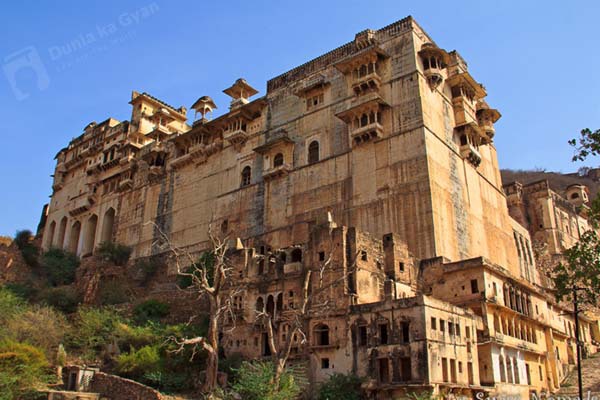 The Chauhan dynasty built the fort, which was previously known as the Star Fort. Rudyard Kipling, who was enthralled by its unique form and construction, characterized it as “more the work of Goblins than mankind”. The fort is a powerful reminder of the valor of Miran Sahib, the fort’s former governor who gave his life in a harrowing confrontation in 1210. The fort lies magnificently on the crest of the Aravalli Ranges and provides breathtaking panoramic views of the city. You’ll find Prithviraj Smarak on the way to visit this place. 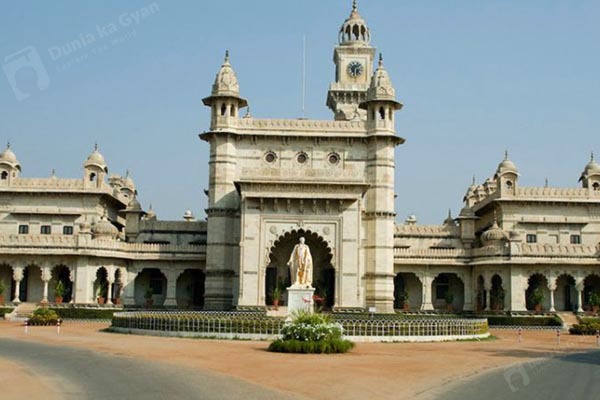 Situated in Srinagar, Mayo College, often known as the “Eton College of the East”, is India’s oldest public boarding school. It was built in 1875 by Richard Bourke and is known for its beautiful architecture and the renowned Danmal Mathur Museum, which has some rare and priceless artifacts. If traveling back in time is your favorite way to spend a trip in Ajmer, then you must see this magnificent building.

Ajmer’s cuisine gets much of its spice, energy, and color from the city’s street food. The Chaat, Samosa, Kachori, and Kadi-Bhujje are must-orders here. These are the most prevalent in Ajmer’s streets, and they might be the most fun. Aside from these, Ajmer offers a lot of eateries that provide a variety of vegetarian and non-vegetarian options in all cuisines. Dal bati churma or Bajre ki Khichdi – lentils in a new guise. Gatte ki sabzi is made using chickpea flour. Sweets are rich in flavors. Do try out restaurants such as Ambrosia, Mango Masala Restaurant, Rasoi – The train hotel plaza restaurant, Silver Leaf, Inbox Restaurant and Cafe, Ajmer Restaurant, and Honeydew Restaurant.

Buying the greatest handicrafts, embroidered shoes, paintings, stone sculptures, and more is one of the top things to do in Ajmer. With so many local markets in and around the city, you can shop until you drop at very affordable costs. Ajmer’s most prominent shopping areas include Nalla Bazaar, Dargah Bazaar, and Mahila Mandi.

A vacation in Ajmer would undoubtedly be refreshing, invigorating, and enlightening. A wonderful educational and cultural site for observing a blend of Hindu and Sufi traditions. Ajmer is the starting point for a trip to Pushkar (14 km), Lord Brahma’s residence with a temple and a beautiful lake to the west. Visit Ajmer Sharif Dargah, one of the most significant Sufi shrines, to reconnect with your spiritual side. Feeling peace outside of the home and carrying a strong positive vibe after leaving the city are precious experiences. Give an expansive tour to this Worldly tourist attraction but with COVID guidelines and the points mentioned in this article.

Some facts to know

Knowing more about one of the oldest and major cities of Rajasthan can be quite riveting.

In the seventh century AD, the city was built by Raja Ajay Pal Chauhan and was a significant center of Chauhan’s power until 1193 AD when Prithviraj Chauhan lost it to Mohammed Ghori. Ajmer has since been the home of several dynasties.

Rules that you need to know

In Ajmer, the legal drinking age is 25 years old.

What is the best souvenir to get?

Yes, moderately. All crimes except for bribery are under control. But that doesn’t imply anyone to be less careful.

What is the best activity in Ajmer?

Camel Safari in Ajmer and Pushkar on the same day.

Are there any unusual historical facts about Dargah?