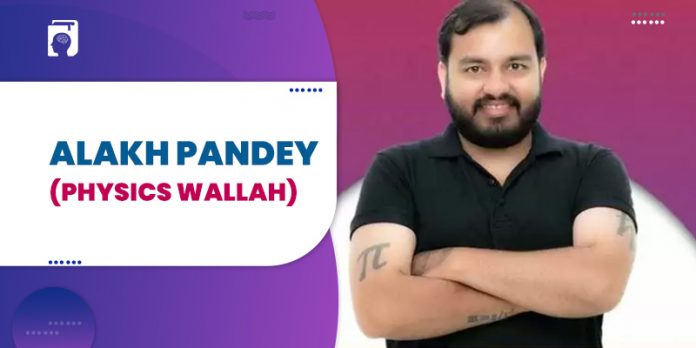 The most well-known young YouTuber from India is Physics Wallah, whose real identity is Alakh Pandey. He records and releases films pertaining to the reading content. He became well-known for his outstanding teaching abilities. Alakh is a motivational speaker as well, and he always lifts everyone’s spirits. On his other social media channels, he has a sizable fan following. Alakh Pandey was raised in Prayagraj (Allahabad), Uttar Pradesh, India, where he was born.

His Family and tutoring story:

He comes from a poor background and had hardships when he was a teenager. Alakh Pandey has always been fascinated in play, and as a young child, he dreamed of being an actor. He took part in numerous productions and received numerous accolades while attending high school and college.

He wasn’t initially interested in tutoring, but his dire financial situation compelled him to. Pandey began instructing younger pupils while still a student in order to help his family out financially. Alakh Pandey eventually developed an interest in teaching and discovered that he is an effective teacher.

He used to ride his bicycle to a student’s house to tutor him while he was in the tenth grade. The pupils there admired the way he lectured. That student’s parents used to give Alakh Pandey the highest accolades for his teaching abilities. Alakh Pandey’s passion for education is what led to the development of his prosperous business.

His teaching career in the coaching institute of Kanpur: Originally from Prayagraj in Uttar Pradesh, Pandey left college in his third year to work as a physics instructor at a school in Kanpur. He initially began instructing pupils in the 10th, 11th, and 12th grades in physics and chemistry. The director of the coaching center urged him to launch a YouTube channel so that more pupils could access his courses. In 2014, Pandey followed his advice and started a YouTube channel called PhysicsWallah.

Journey of gaining popularity with his coaching institute:

Alakh Pandey founded a coaching institute with his business partner, where he worked as a teacher for four years. At first, in 2015, he had financial difficulties, but in 2017, as his coaching business gained popularity, he was able to start making good money from it and was also well-recognized. He started making videos to aid the kids because at the time there weren’t many instructional YouTubers.

On January 28, 2014, Alakh Pandey created the Physics Wallah – Alakh Pandey YouTube channel. He began uploading videos to the site in 2016. Initial years saw a slow pace of events. The channel didn’t take off until Pandey left his coaching position to devote all of his time to YouTube in 2017. He had 2 million subscribers by 2019. Later, he began instructing online courses on his YouTube channel, such as IIT, JEE mains, JEE advance, NEET, and medical.

Before beginning to work on his YouTube channel, Alakh Pandey established a Facebook page called Physics Walah in 2015. He made instructive memes, posed queries, held contests, and announced numerous rewards for the victors, but his Facebook page didn’t get much traction.

He started his own website on April 11th, 2019 to assist his students, where he offers free notes, books, and quizzes. After gaining notoriety, Alakh gave his first interview on the Hindi news program Bharat Samachar. He was approached by numerous persons, coaching organizations, and institutions, but he turned them all down because he believed that all pupils should receive free education.

The coronavirus pandemic began in 2020. The demand for Pandey’s content increased as instruction and learning shifted online. That year, he launched the PhysicsWallah app. He offered his classes at a lower price than more reputable sites like Byju’s and Unacademy in order to get an advantage over them.

Unacademy offered to recruit Pandey on a hefty pay deal in an effort to terminate the competition, but he declined. According to Singh, the firm also stole teachers from PhysicsWallah. As can be seen by his startup’s success story today, Pandey remained committed to his idea of inexpensive coaching even as his workforce shrank.

PhysicsWallah wants to expand even more with its $100 million funding by employing this money for commercial expansion, branding, creating more PW offline centers, and introducing courses in other languages.

His career as a full-time YouTuber-

Alakh Pandey realized in 2017 that his conventional offline teaching business couldn’t reach many pupils. Even though he was making a good living from his coaching business, he made the decision to leave and devote all of his time to YouTube in order to reach more students. Additionally, Alakh Pandey’s YouTube channel had only 10,000 subscribers at the time.

His financial struggles at the start of his career-

Alakh Pandey was unable to make a suitable living at the time because he had just 10,000 members and a small number of video views. He began studying for the UPSC Civil Services Exam as a result, but his passion for education prevented him from quitting his job as a teacher.

Alakh Pandey kept working on his YouTube channel because he was receiving lots of positive feedback from the students who were requesting more of his videos and because he could see the potential of the platform. He earned his first-ever payout from his YouTube channel in January 2017 in the amount of 8,000.

The recent wealth of Alakh Pandey-

Alakh Pandey’s net worth is currently $139,357, according to research by noxinfluencer.com, which provides a calculator for figuring out YouTubers’ net worth. This equals Rs 1,01,43,559 when converted to INR (at the rate of February 2020). ( Rs 1 crore, a year). Physics Wallah, Alakh Pandey’s YouTube channel, has 4.35 million subscribers right now. The calculator computes the net worth by factoring in the overall subscription count and the anticipated daily views.

With over six million followers on his Physics Wallah – Alakh Pandey YouTube channel, Alakh Pandey is now a well-known instructor.

The source of Alakh Pandey’s income-

Since starting his YouTube channel, Physics Wallah, Alakh Pandey has been giving his subscribers free physics lessons. The Lakshya Batch was the first batch he started after launching his software, also known as Physics Wallah, last year. For science students, the goal was to offer the entire course for Rs 999. He also started a fast-track class to finish the JEE component in 5 months for Rs 3500 and a special batch to do the board portions in 4 months for Rs 2000.

His Income and funds-

Most of his lectures are based on NCERT (National Council of Educational Research and Training). Millions of his internet students watch every single video of Alakh Pandey without skipping a beat. Alakh Pandey’s distinctive and straightforward study techniques helped him establish himself as a well-known Teacher (Youtuber). Due to his talent, he has reached his current pinnacle. For his YouTube channel, he received a Gold Play Button.