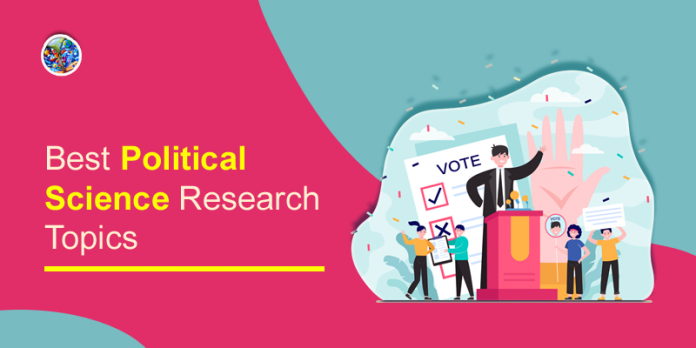 Assumingly, you have political science research topics to complete but don’t have any idea where to start from. Breathe easy, we are here to help. With a well-curated list of political science topics for the project, we make it easier for you to choose a suitable topic. Read on to score well!

The Ministry of Parliamentary Affairs (India) has introduced the National Youth Parliament Competition Scheme for schools and universities. The idea is to strengthen the roots of democracy and educate the student community about Parliament and its functions.

Various political science topics can be chosen for the ruling and opposition parties, such as the vaccine distribution process, health sector, technology development, petroleum hike, regional disputes, etc. The competition requirements include:

By following some do’s and don’ts, this is going to be the most engaging and hands-on project idea. It’s a platform to create awareness and enable the young to be vocal about their ideas and opinions.

2. Security in the Contemporary World

The country must protect itself and its citizens from all threats, both external and internal. Otherwise, it will have to deal with an existential crisis. As a result, every country, big or little, makes security a top priority. But, in this context, what does security imply? “Freedom from threats,” to be precise. Physical, financial, medical, or emotional harm could be posed. Because of the broad breadth of research, it is one of the most popular political science research topics.

Globalization is a reality with headways in IT, transportation, and trade. Like any other phenomenon, it has its benefits and disadvantages. Why not consider globalisation as one of your political science topics? It’s a diverse and engaging topic with a lot of potential for research. You can discuss globalisation in the 21st century, movements against globalisation, the impact of globalisation, and more. Don’t forget to mention the

It’s a vast topic, and you can get loads of information. If you are a student, you can get good grades by choosing this topic. And, as a teacher, you can understand your student’s skills and knowledge.

Regional aspirations are understandable in a country as diverse as India. India had to deal with a variety of challenges after independence, including partition, state organisation, displacement, linguistic disputes, and so on. The Punjab Crisis and Operation Blue Star brought regional aspirations to the fore in the 1980s.

Following this, there were movements for autonomy in the North East and terrorism in Kashmir. Because it is so comprehensive, it is an excellent pick for your political science project. With a wealth of information available both online and offline, you may cover a wide range of issues with this project.

“Corruption” is an umbrella term for multiple conduct patterns. The socio-economic and polity of a community decide the corruption levels in a country. In recent times, almost the whole world is facing this never-ending issue. Think of it as social cancer, which is spreading like a wildfire and killing the country slowly. When using “corruption” as one of the political science topics, you can check the content on the internet.

The United Nations Organisation (UNO) could be one of the best political science topics for the project. After all, there’s a lot to research and discuss on this topic. The global inter-governmental organisation came into existence in 1945 to promote peace, resolve issues between member countries, and ensure each individual receives social justice and basic human rights. You can begin by explaining the principal organs of the UN, such as UNICEF, UNESCO, WHO, ILO, veto power, the General Assembly, and more.

John Lewis once famously stated, “The vote is precious. It is the most powerful non-violent tool we have in a democratic society, and we must use it. It gives you the power to choose your representatives and transform your society and nation. You can survey your colony or society to find out the voting patterns. It includes what people consider before voting and what they expect from their winning candidate. Also, you can guide the public regarding their voting rights, why they should vote, etc.

India embraces a multi-party system at the national, state, and local level. This could be one of the best political science topics for your next project. The Congress system, the rise of the the BJP, the emergence of a multi-party system in India, and other such subtopics can be explored. This diversified project will make you understand your polity better.

History is full of examples where people have taken to the streets whenever they found that a given problem was not being addressed adequately. From the Satyagraha and Swadeshi movements in India to the Nirbhaya Movement and the CAA and NRC Protest in 2019, you name it. You can include various types of movements like ecology, women, workers, etc. in your project outline.

10. Where do you see the Nation in the next ten years?

“Where do you want to see ourselves in ten years?” is a question we’re frequently asked. Simply rephrase the question: “Where do you envision the country in ten years?” It’s a crucial question since you are the country’s future. When you choose it as your political science topic, you are more likely to obtain a thorough understanding of the current situation.

11. Role of Media in Politics

The media is shaping the whole political scenario as it has a remarkable impact on politics. It can either make or break anyone’s political career and can lead to electoral success or failure. The news spreads like a fire, as nowadays, news is just a click away (24*7). You can explore the net for further details on the role of the media in politics. And, you can conclude the project with a subtopic: Democracy’s Fourth Pillar: Real or Myth?

How we are governed is greatly influenced by political science. Political Science topics are a great way to delve deeper into the subject and gain a better understanding of it. By choosing these topics, you will be able to complete your assignment and improve your grades.

Rohit Kumar
Passionate about content quality and attention to detail, Rohit has penned over 15,000 copies for some of the leading online and offline publications in their eight-year career. Currently heading the content team at Dunia Ka Gyan, he believes in team spirit, ingenuity, and collective growth.