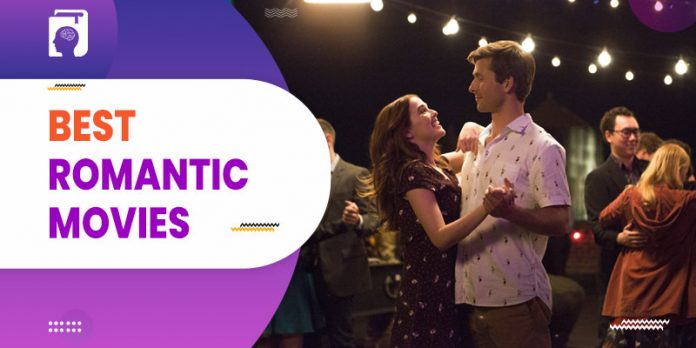 Nothing is more beautiful than a romantic movie- beautiful people saying beautiful things to each other, shot in beautiful and mesmerizing locations, and concluding with a happy ending. It is impossible not to fall in love with movies that explain how it feels to fall head-over-heels for a person.

The list of best romantic movies is HUGE and differs from one person to another. Some of the most popular romantic films include The Notebook, When Harry Met Sally, La La Land, etc.

Here are some of the best romantic movies you must watch at least once in a lifetime with your loved ones!

So let’s get started!

One thing that makes The Notebook the best romantic movie is how the story takes us back in time to see how their relationship was. It tells a good love story and makes you feel all the emotions portrayed by the actors.

The movie also makes the viewers realize that one should not settle for anyone who does not love one like Noah and Allie love each other.

This fantastic romantic movie is available on Netflix and Amazon Prime Videos.

Arghh, we all know that Jack could easily fit into the floating door. However, keeping all the geometric frustrations aside, Titanic is another epic Hollywood romantic movie released in 1997. Even today, this movie has a lot of fanbases. This film is more emotional and less commercial.

It is full of a cheesy, gripping class-busting love affair. Moreover, plus point for the steamiest sex scenes ever shown in a film.

We all remember the most famous “Titanic Pose” and want to try it with our loved ones. Don’t we?

If you still haven’t watched this movie, you must right away! It is available on Amazon Prime Videos, Hotstar, MX Player, etc.

Pride and Prejudice by Joe Wright is an innovative romantic mix of genres. It is a period romantic movie that gives audiences the vibe of a 1980s rom-com.

This movie draws the audience’s attention with amazing cinematography and dramatic romance. Everything about this movie is the best, including the background music, intimacy, and the twist and turns.

Pride and Prejudice is a timeless story directed in a unique way for the new generation.

When Harry Met Sally is a rom-com released in 1989, this movie stands out from all the other romantic movies. Apart from being a romantic movie, it also has a humorous element.

Harry and Sally are meant to be with each other. However, it just takes a few ups and downs to realize it.

One of the most important takeaways in the movie is that “Friendship is a necessary ingredient for two people to love.”

This romantic movie revolves around Sylvie, who has a summer romance with a saxophonist. The story starts when he takes a job at her father’s record store in Harlem.

After years when they bump into each other again, they realize they still have feelings for each other.

Yash Chopra’s Bollywood blockbuster Veer-Zaara keeps them wondering if a Hindu man, Veer, and Pakistani woman, Zaara, will get together after all the cross-cultural, emotional, and physical barriers.

The movie shares political and social messages about Indo-Pak, women’s equality, and hope for the future.

This movie is a soulful, uplifting, and the best Bollywood movie you should watch if you are a fan of romance.

It is available on Amazon Prime Videos.

The Lunchbox is a romantic and comedy Bollywood movie revolving around the life of two lonely people who are looking for peace and happiness. The story starts with Ila, who prepares lunch for her husband to rekindle their marriage. However, the plan goes wrong. The lunch ends up in front of an antisocial widower.

When her husband does not mention the meal, Ila adds a note to the next lunch she prepares. Then an unlikely friendship is born.

Lunchbox is not only popular in Indian cinema but also is one of the highest-grossing foreign-language movies of the year.

The Fault in our stars is an adaptation of the book written by John Green. The movie revolves around Hazel and Gus. Hazel is a cancer patient who meets Gus at a support group. They share a sarcastic wit and a love that takes them on an unforgettable journey.

The key takeaway from this romantic movie is that “even if you know you are dying, you still have to make the most of the time you have.”

This movie is available on Disney+ Hotstar and Amazon Prime Videos.

Rockstar is about a college student Janardhan who is desperate to become a musician. Although heartbreak helps him reach his goal, it leads him to self-destruction.

Remember how breathtaking and soulful “Kun Faya Kun” is? This movie is also famous for its dialogues, music, and emotions.

If you want to watch a movie that is fun, romantic, and leaves you a little heartbroken at the end, then Rockstar is a must-watch.

La La Land is another popular comedy, drama, and romantic musical movie. The story revolves around Sebastian and Mia, drawn together by their common desires to follow what they love.

However, to become successful, they need to fray the fragile fabric of their relationship, and the dreams they had to live together threaten to rip them apart.

This movie is available on Amazon Prime Videos and Netflix.

Bollywood is incomplete without mentioning Dilwale Dulhania Le Jayenge. It was released in 1995 and is considered the golden standard for Bollywood romantic comedy movies.

This movie features the most charming Bollywood power couple, Shah Rukh Khan and Kajol, who fall in love on a backpacking trip to Europe.

The best part after 25 years of release is that this masterpiece was re-released in 18 countries on October 20th, 2020. Can you forget, ‘’Jaa Simran Jaa Jeele Aapni Zindagi”? Brought a smile, right?

This Bollywood blockbuster is available on Amazon Prime.

If you are looking for a movie to make you cry, laugh, and then cry, don’t miss it. Barfi is a movie that showcases the magical relationship of an autistic female, Jhilmil, and a deaf-mute guy Barfi. This is a must-watch.

After this movie, Ranbir Kapoor became one of the most credible actors and a rising Bollywood superstar.

This movie is available on Netflix, Amazon, and Hotstar.

Slumdog Millionaire, directed by Danny Boyle, revolves around Jamal Malik, who was an orphan and ended up one question away from winning India’s “Who wants to be a Millionaire?”

The movie shows all the hardships he has faced on his journey to reunite with his childhood love, Latika. The film is full of emotions and romance.

You can watch this movie on Netflix and Prime Videos.

Jab We Met by Imtiaz Ali, starring Shahid Kapoor and Kareena Kapoor as the lead actors, revolves around a suicidal businessman and a talkative Geet who run from her family. This movie is all about how two unknown travelers become friends and eventually turn into lovers.

Jab We Met became famous because of its unique filmmaking style, including romance and travel.

It is available on Netflix and Amazon Prime Videos.

The movie revolves around Ladon and Jamie, who are two different people but cannot stop falling for each other every day. But when the illness strikes their relationship, one question arises, how will they survive this news?

This movie is full of emotions and a complete roller coaster ride.

You can watch a walk to remember on Amazon Prime Videos and Netflix.

Watching a romantic movie with your loved one with fairy lights and yummy food can be a perfect date night, isn’t it? The list of romantic films is HUGE. Choosing the right one can be time taking.

To help you better, here are some must-watch and best romantic movies for you.

We hope the list helps you have a gala time with your loved ones.

The Best Movie Streaming Platforms for 2023