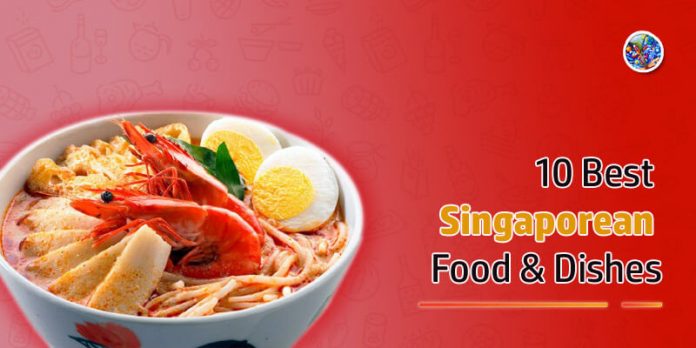 The Singaporean food culture is strong and ubiquitous. Even the smallest of shops and street vendors provide authentic, mouth-watering dishes for the locals and tourists to feast on. These cuisines are undeniably scrumptious and extensive to suit all moods and tastes.

Masses waiting patiently in front of vendors and restaurants for food is a common sight here. Has that raised your curiosity? Here’re the Singapore foods and dishes that would leave you clamoring for more. After all, you should know your options when visiting Singapore. 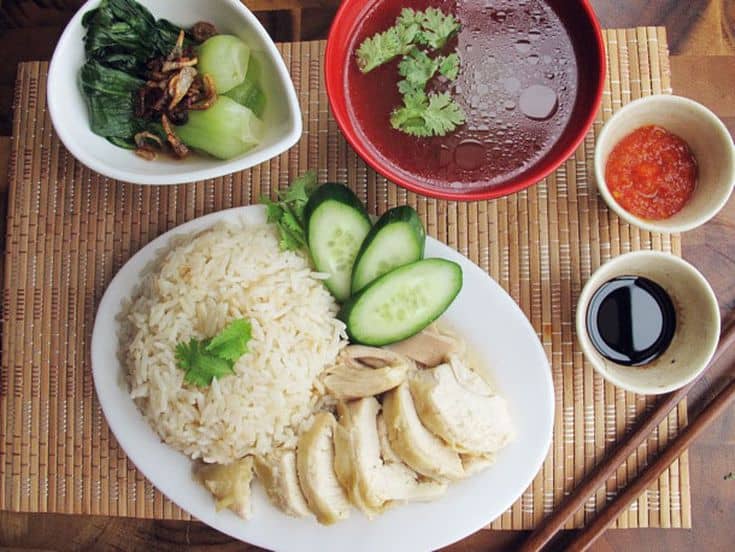 Call it the national dish of the country. It’s so popular. The rice dish is available nationwide, from premium restaurants to street vendors. It’s a Singaporean adaptation of some dish with origins in Hainan Island, inhabited by Chinese immigrants. The dish serves slices of chicken with spicy rice prepared using ginger and chili paste. The unique assortment of spices used to prepare the dish provides an amazing fragrance and taste. One serving of the dish usually costs around SGD 15.

The best places to try this dish are: 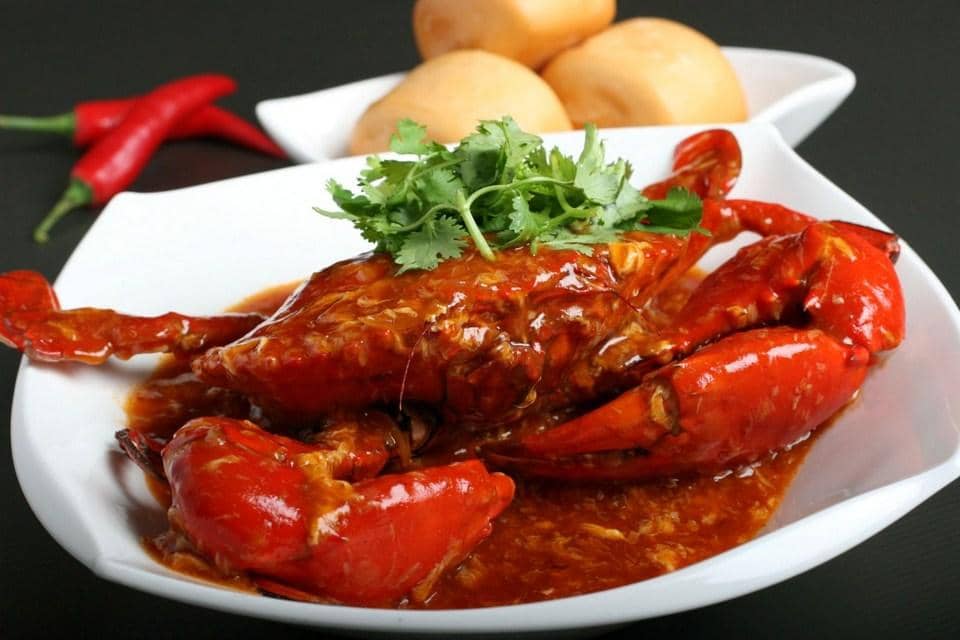 A popular Singaporean food, Chili Crab once ranked 35th in the CNN-Go list of the ‘Most Delicious Dish Globally’. This stir-fry dish is prepared by dipping crabs into a mixture of various flavored tomato sauces. They’ll serve you Chili Crab with Mantou, which is a type of deep-fried bun. This dish is a must-have if you love seafood.

With its rise in popularity, varied versions of the dish have surfaced lately. Most famous ones being the traditional spicy tomato sauce version, and the black pepper sauce version. Usually, the dish costs SGD 25 to SGD 90 depending on the size of the servings.

Despite its nationwide availability, some of the best places to explore this dish are: 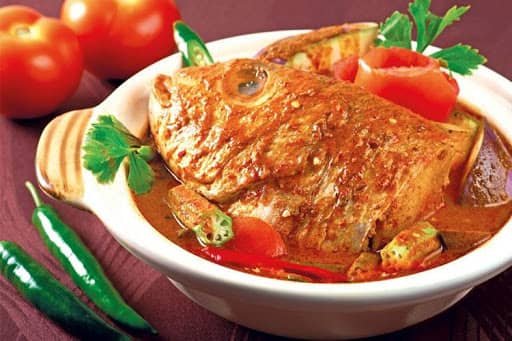 This unconventional-sounding dish is inspired by the South Indian dishes but has a strong Singaporean touch. It is usually served with rice or roti, a type of flatbread. They prepare it by cooking a marinated fish head with a mixture of vegetables like okras and eggplants and various curry sauces.

Usually, the head of Red Snapper fish is used to prepare this street dish. It is considerably spicy, thanks to lots of spices and chilies used. This dish also comes in varied versions, one of them being the Assam style Fish Head curry, which uses tamarind to create a sour and spicy taste. A single serving of this dish usually costs around SGD 20-50.

The best places to try this dish are: 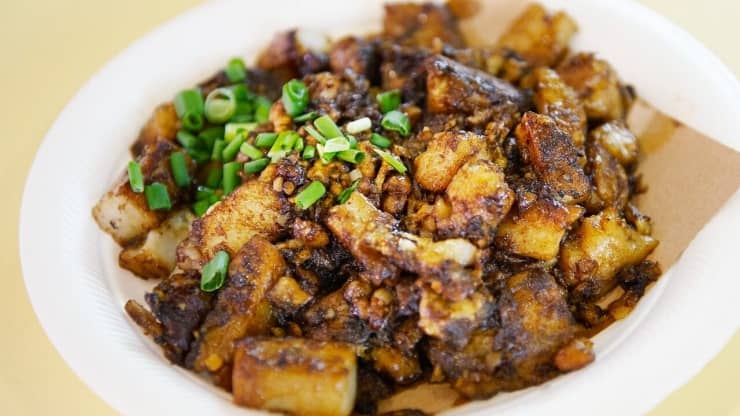 Different from the usual reddish-orange carrot cakes, this Singaporean food & dish is Black and White in color. Also referred to as ‘chai tow kway’, the dish is prepared using radish (a form of white carrot) with eggs and chai ooh. The cake is prepared as any regular flour cake and is served with beaten eggs and sweet sauce. This specific dish is quite chunky and has a different texture than that of a regular flour cake. Two servings of Fried Carrot cake, usually cost SGD 5 only. Needless to say, it’s the most famous sweet dish in the country.

The best places to try out the savory Fried Carrot cake include: 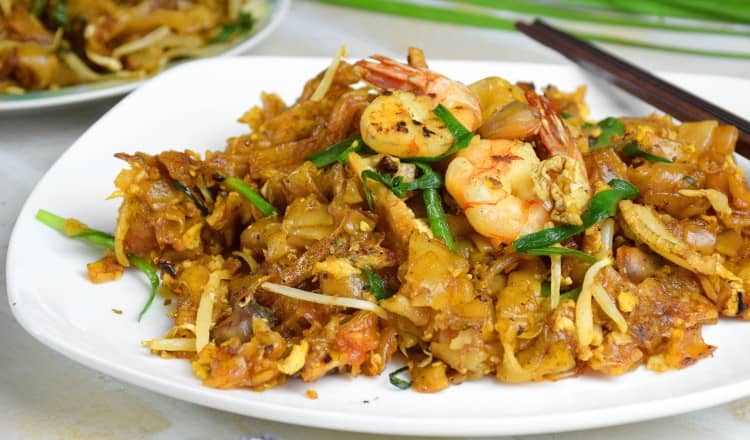 A staple Singapore street dish, Char Kway Teow is essentially wok-fried noodles. The dish is prepared using noodles, egg noodles, and flat rice and is usually served with Lap Chong, a version of Chinese sausages. The dish is spicy heaven, containing various veggies and condiments like bean sprouts and chives.

There are various versions of the dish served nationwide, including healthier, protein-free options as well as oil-based and lard-based variations. It is mostly served on banana leaves to keep the pleasing fragrance intact. You would shell out SGD 8-10 for one serving of the dish.

The best places to try out this dish are: 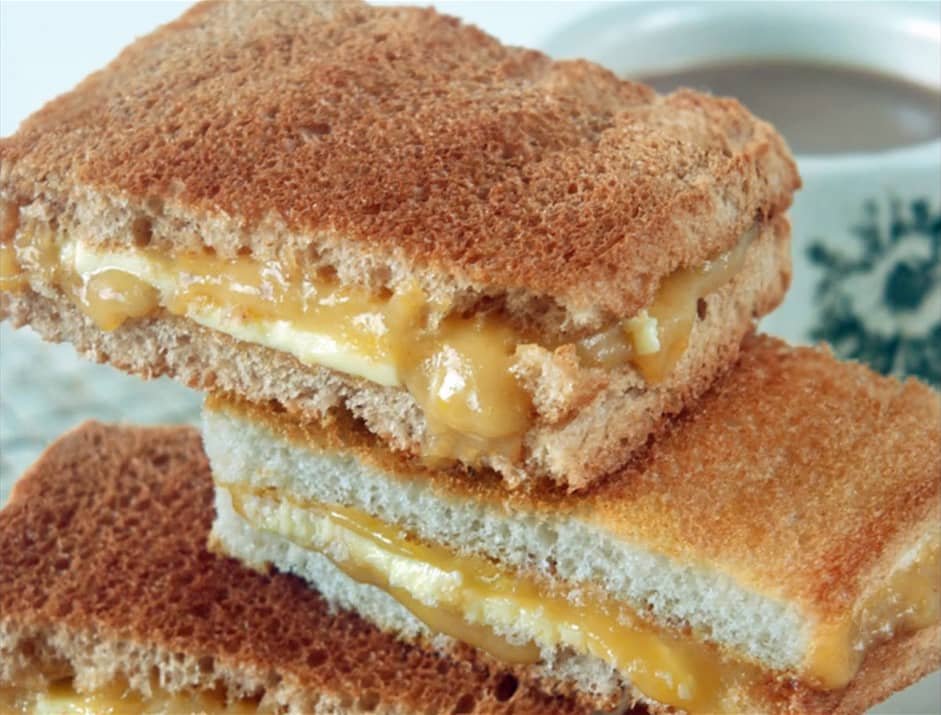 A conventional Singapore food, Kaya Toast is served with soft-boiled eggs. Think of it as the most preferred breakfast dish in this part of the world. They prepare it by covering white bread loaves in ground coconut, or egg kaya, and then grilling them with the help of butter.

The dish has many versions across the country. Some use round buns to create the toast while others prefer using dark soya and pepper sauce in higher quantities. Hands-down the most famous version, however, is Brown Kaya Toast. It is prepared using caramelized sugar and the Green Kaya Oat, which includes Pandan leaves. The toast usually costs as little as SGD 1-3 for a serving for two people.

The best places to explore the dish are: 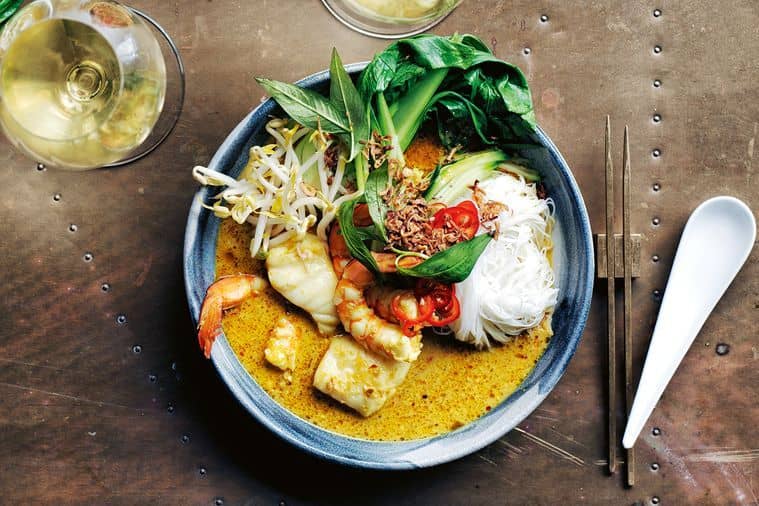 If you are a fan of street food, Laksa is a must-try. They prepare it with a mix of Coconut soup, Prawns, cockle, and Fish cakes. Traditionally Peranakan, this dish is served with Otah and primarily consists of flat noodles.

It’s inspired by Chinese and Malaysian cuisines and has primarily two versions. One is Asam Laksa, which is a Malaysian-inspired version popular in the Malay regions like Penang. The other version, Curry Laksa, is a staple fast food nationwide. Various other versions differ on the spices and fish cakes used. For a serving of two, this dish costs SGD 8-10.

Best places to try Laksa are: 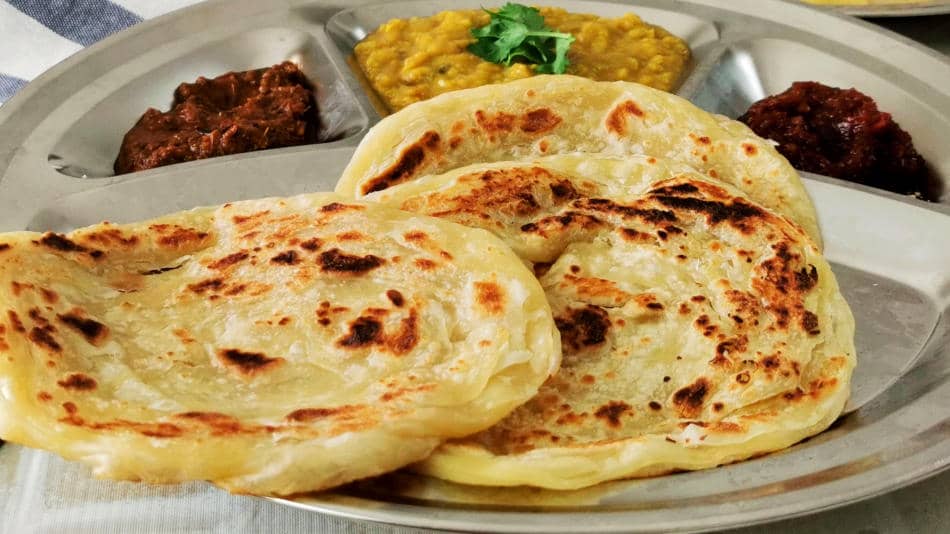 Inspired by the Indian stuffed flatbread dish, Roti Prata is a delectable street food option. The dish is prepared by making flatbread out of wheat flour. Later, it is stuffed with various ingredients like curry and vegetables. The roti prata is a crispy and crunchy dish usually served with Vegetable curry, chicken, or beef broth dishes. This Indian delicacy is like a spicy pancake and is very appetizing. It costs SGD 14-15 for two servings.

The best places to have Roti Prata in Singapore are: 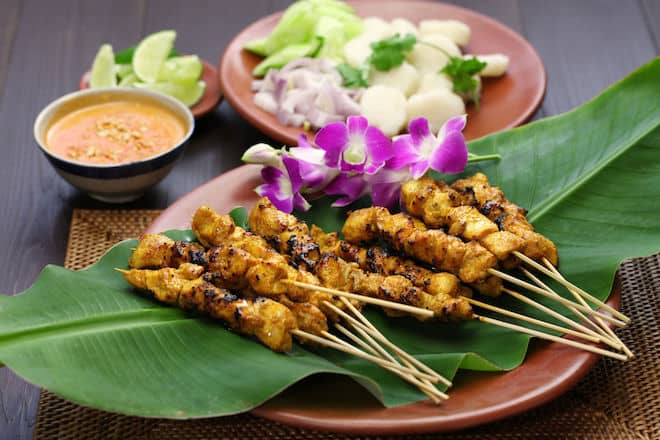 The local delicacy is popular among meat lovers. It is prepared with various types of meats like pork, beef, chicken, or mutton. The meat is broken into smaller parts, marinated with turmeric sauce, and then skewered after candying it. Originally from Indonesia, this dish is available in almost every restaurant, big or small.

The meat dish is usually served with rice dumplings, onion, and peanut sauce. Think of it as a snack that can be enjoyed anytime. It costs SGD 20-25 for two servings of the dish.

The best places to get your hands on this dish are: 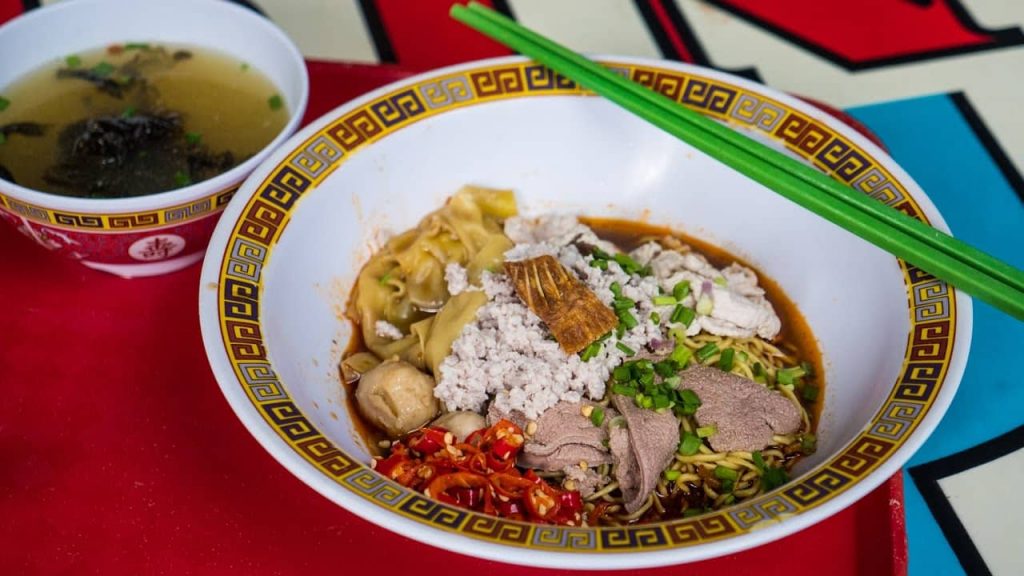 Basically ‘Minced meat and noodles’, is another popular Singaporean food featuring minced pork and slices of fish meat. A special sauce is used to cook this soupy noodle-based dish. It has various variants like a dry version, which is accompanied by a soup. A mixed version is also available. A variety of noodles can be used to make this dish. And, the soup for Bak Chor Mee is usually switched to remove the monotony of the dish while maintaining a staple taste thanks to the sauce. It costs SGD 17-20 for two servings of the dish.

Singaporeans use a variety of cutlery for different dishes like forks, chopsticks, and spoons. Mind you, Singaporean dishes are typically heavy on spices and use a lot of nuts and soy.

The country has a varied list of staple dishes from savory to spicy. There are a lot more dishes and local variations of these dishes that over time evolved as independent dishes.

These were the best Singaporean food & dishes to try and explore if you ever get to visit the country. The country is an amalgamation of various cultures be it Malaysian, Chinese, or Indian culture, and its food is highly inspired by these cultures by adopting their dishes and exploring them in their way. The cuisine of the country is indeed one of the best ones. These were the Best Singaporean Food & Dishes that can satiate your food cravings for sure. 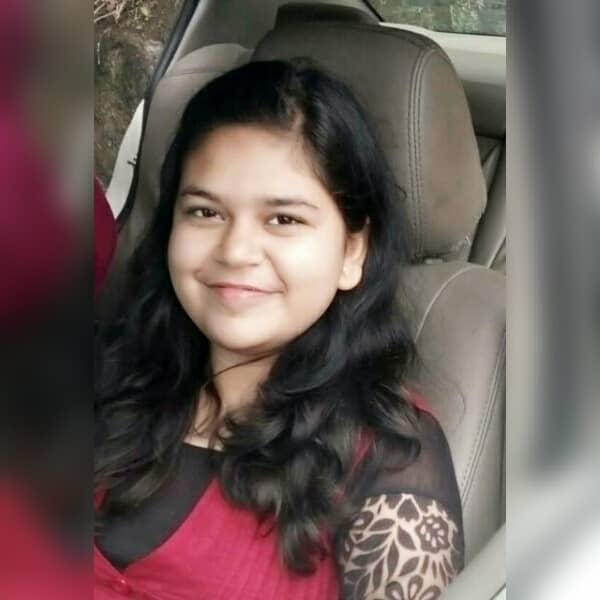