Bourbon vs Whiskey: Check Out the Key Differences 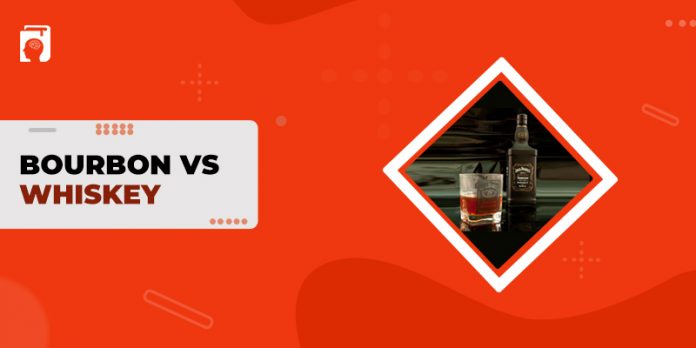 Bourbon vs Whiskey is a tough choice. But do you know the difference between Bourbon and Whiskey? If you don’t, here’s an opportunity to know. Read on.

Whiskey is one of the most popular alcoholic drinks in the world. Interestingly, its name originates from the Irish phrase, “Water of Life.” Whiskey or whisky, depending on where you’re consuming it, is made all over the world, from Ireland and Scotland to Japan and America. However, because each nation uses its own production and ageing techniques, the finished beverage is as distinct as the country from which it came.

Bourbon, on the other hand, is a kind of whiskey produced only in the United States, similar to Scotch whiskey, which originates from Scotland.

It’s a type of American whiskey produced from a corn-based mash. Bourbon is closely associated with the ‘Bluegrass State,’ making it tempting to believe that it’s only created there. Also, the Kentucky Distillers’ Association claims that Kentucky produces 95 per cent of the world’s bourbon. The fact is that it can be made anywhere in the United States, and hence, new bourbon distilleries keep springing up regularly.

We even have federal regulations controlling bourbon’s identification. Per them, it is a “distinguished product of the USA,” and that the term “bourbon” must not be used to represent any whiskey or whiskey-based distilled spirits not produced in the USA.

A whiskey’s mash (the blend of grains from which the product is brewed) must include at least 51% corn for it to be called bourbon. The mash should be fermented at 160 proof or less, the distillate must be preserved at 125 proof or less in burnt new oak casks, and it must be free of additions.

The origin of the term “bourbon” is shrouded in mystery. Bourbon County in Kentucky and Bourbon Street in New Orleans, however, are the most notable rivals. Both were named after the Dynasty of Bourbon, a European royal house that descended from the French. Although the regulations say that bourbon must be aged in charred oak barrels, there is no minimum ageing period.

However, a bourbon matured for four years or less should feature details regarding the ageing duration on the label. Likewise, a bourbon aged for at least two years is regarded as “straight bourbon.” To be recognised in the European Union, it must be aged for at least 3 years.

There are no artificial flavouring or colouring ingredients allowed in bourbon. But it has a complex flavour profile that includes vanilla, spice, oak and caramel. However, the only way to find out is to give it a shot. From the traditional, old fashioned to the pleasant mint julep, bourbon is a key ingredient in many cocktail recipes. There are a plethora of wonderful drinks that make use of bourbon’s distinct flavour character. 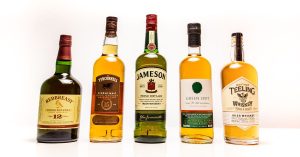 The first mentions of distilled alcohol date back to the 13th century in Italy. Back then, it was used to make a therapeutic syrup by distilling alcohol from wine. Distillation was performed throughout Europe. Countries like Ireland and Scotland were making aqua vitae, which means “water of life,” the original word for whiskey. It was meant for medical and recreational reasons by the late 15th century.

Whisky production involves a lengthy process that includes the distilling of fermented grains, maturing, and dilution. The characteristic flavour of whiskey emerges as a result of this procedure. Before being matured in barrels for at least three years, distilled malt whisky generally contains about 70% alcoholic content (vol%).

During the maturing process, some alcohol evaporates, leaving cask-strength whiskey with an alcohol level of 55–65 vol per cent. Prior to bottling, the whiskey is attenuated to roughly 40% by adding water, which considerably alters the flavour.

Whisky drinkers frequently add a small amount of water to the alcohol before drinking it to improve the flavour and make it smooth. Whiskies, in addition to water and alcohol, include a variety of chemical components that add to their flavour.

Several whiskies, particularly those produced on the Scottish island of Isley, have a distinct smokey flavour that occurs when malted barley is burnt over peat. The smokey character is due to phenols, namely guaiacol, which is far more prevalent in Scottish whiskies than in their American counterparts. From Kentucky Bluegrass to Japanese distillery, whisky manufacturing is rapidly booming all over the world. Whether drunk straight or in cocktails, the popular spirit is one of the best-selling liquors in the world.

The origins of whiskey remain a mystery, with both the Irish and the Scots claiming to have invented it. According to some historians, the first documented record of whiskey may be traced to the Irish Annals of Clonmacnoise, published in 1405, around 90 years before Scotch manufacturing.

Whatever the roots of whiskey were, the birth of bourbon was still around 400 years away. As per bourbon scholar Michael Veach, the native spirit was not produced in America until the mid-1800s. The first documented reference of bourbon, according to Veach, was in an article of the Western Citizen, a Kentucky-based newspaper, in 1821. Let’s go a bit further and have a look at each of the whiskey flavours, one by one.

As the basics are done with, we can now focus on Bourbon vs Whiskey. The difference between bourbon and whiskey are presented across all key parameters.

Due to its milder tastes, Bourbon is an excellent introductory spirit for those who wish to experience whiskey for the first time. While bourbon is frequently chosen by the young generation, other whiskeys can have a stronger and more profound taste. This may make them an accomplished pleasure that is best appreciated after a more thorough experience and mastery of the spirit has been obtained. So, that was our take on Bourbon vs Whiskey.