Top 10 Fastest Train in the World 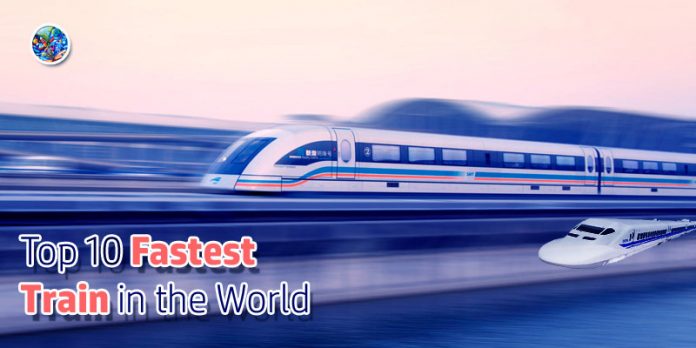 Gone are the days when trains were lousy and slow. With headways in technology, trains are getting smarter, better, and faster. They can transport masses quicker than even an airplane when you consider the time involved in boarding and deboarding. But have you ever wondered which is the fastest train in the world? Join us, as DuniaKaGyan takes you on a joyride through the top 10 exceptionally fast beasts on the track out there.

Let’s start with a dead giveaway. All these trains are functioning in Japan, Italy, China, Spain, and other first-world countries. We hope someday in the near future such technologies will be available globally and accessible to all.

Top 10 Fastest Train in the World

If high-speed trains thrill you, read on. Dunia Ka Gyan takes you through the top fastest train in the world. 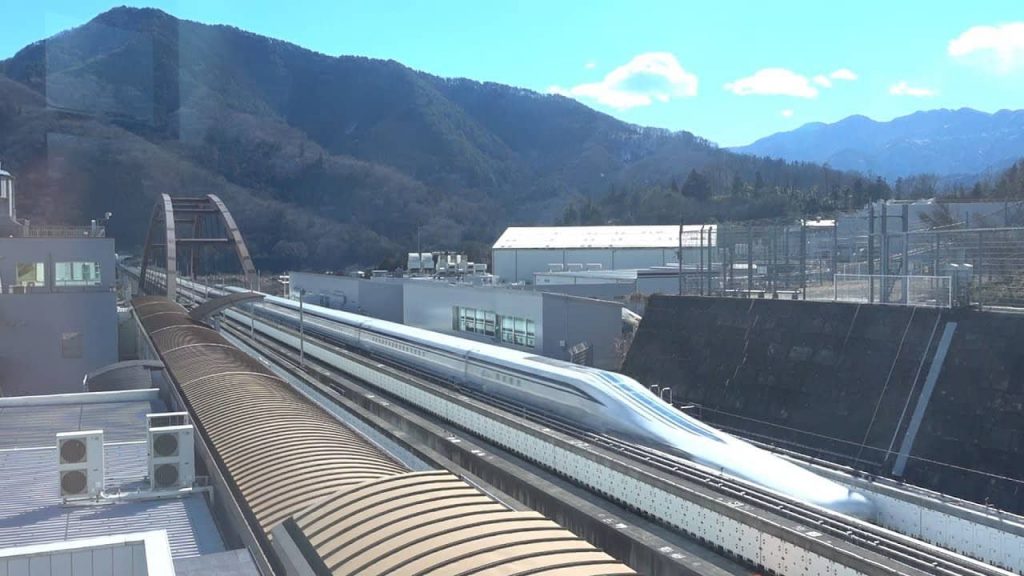 This 980 feet beast is hands-down the fastest train in the world. With a distinguishable 49 feet nose-like structure that helps reduce drag, the train is currently operable in Japan. It was manufactured by Mitsubishi Heavy Industries in collaboration with Nippon Sharyo.

First introduced in November 2012, the train is currently operated by JR Central and achieved a top speed of 375 mph on April 21, 2015, a mark that still stands. The record for the highest land speed previously rested with MLX01, another Japanese maglev. It clocked 361 mph in December 2003.

The train is scheduled to be commercialized by 2027 and would operate between the cities of Tokyo and Nagoya with an estimated route time to be 40 minutes for 178 miles. 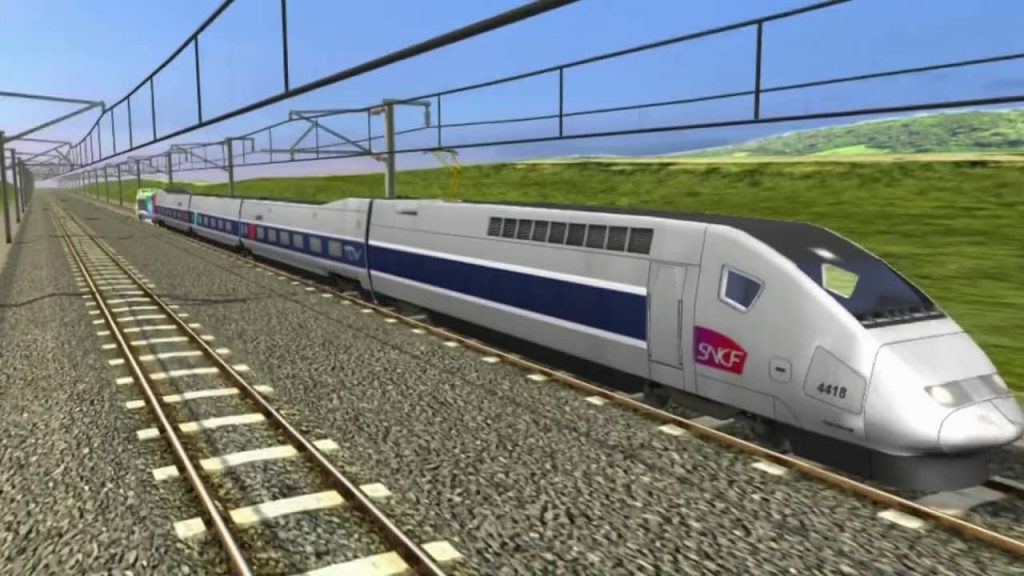 The world’s second-fastest train has been operating since 2006 for the French National Rail Company (SNCF). It was manufactured by Alstom to operate on French rail lines suitable for high speed. With a length of 657 feet, the train can operate at a maximum speed of 357 mph.

SNCF operates an array of POS trains, including the SNCF 4400 series. It features some of the most efficient and reliable trains like TGVs. For example, the TGV Duplex has a similar outer structure to that of power cars and the POS 4402, which set a speed record on April 3rd, 2007.

The TGV POS trains run between France, South Germany, and Switzerland, connecting the cities of Basel, Zurich, and Vallorbe. The train line is called Lausanne and continues to Paris. These trains work on an asynchronous technique that isolates both motors enabling them to function even when one engine fails. 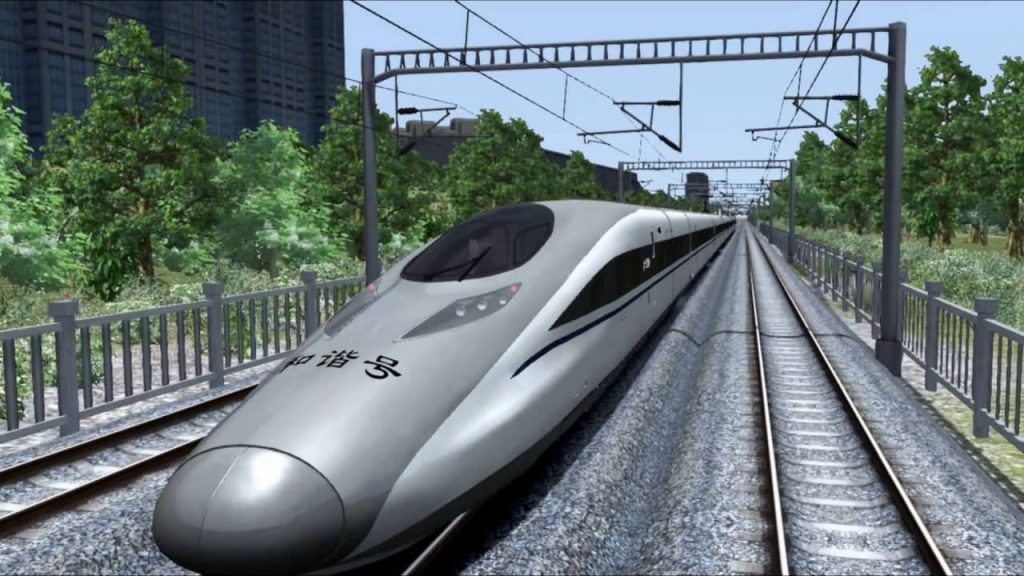 First introduced in 2010, harmony CRH features a staggering length of 666 feet. Currently operating under the China Railway, the train was manufactured by CRRC Qingdao Sifang. Why is it on the list? Well, it achieved the highest speed of 302 mph. Note that, the train commercially operates at 236 mph with 217 mph as the cruise speed.

The train is designed to decrease aerodynamic pressures with a streamlined aluminum alloy body/ Also, it ensures vibration-free journeys for a comfortable experience. Thanks to the design and noise insulation and sound absorption materials, these trains reduce noise pollution.

Currently, running between Shanghai and Nanjing the train is capable of boarding 490 passengers in one go. A select few can even view the functioning of the train if they’re closer to the driver’s cabin. 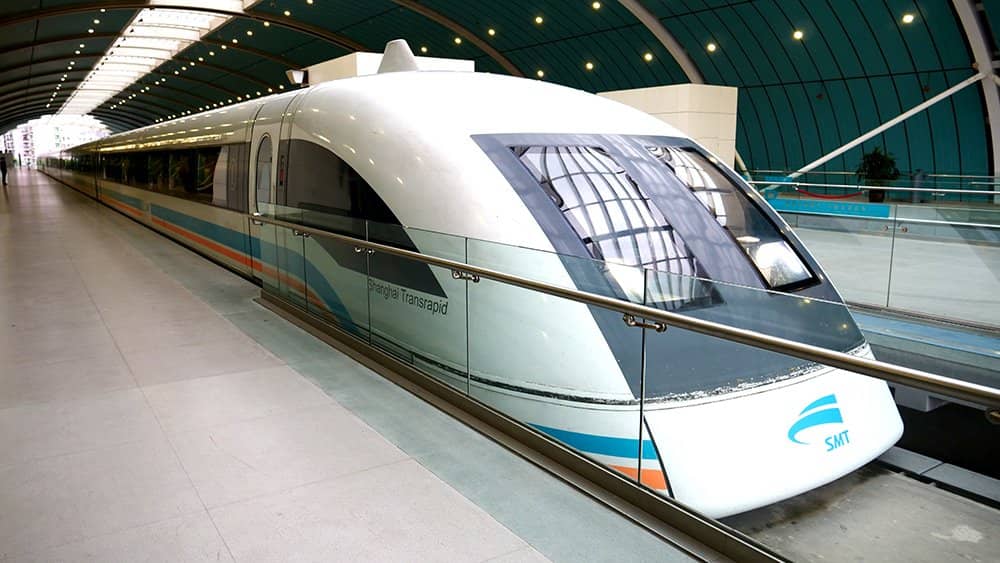 The name says it all! The train operates on the breakthrough magnetic levitation technique. It is being operated by the Shanghai Maglev Transportation Development Co. Ltd. First introduced on December 31st, 2002, this 18 miles long train was manufactured by Siemens and ThyssenKrupp as a collaboration project. With the highest speed of 268 mph, the train functions between Pudong International Airport and Shanghai. It also held the Guinness World record of being the world’s fastest commercial train in 2003.

Because of the magnetic levitation technique, the train hovers above the railway lines making it noise-free and energy-efficient. It uses as low as half of the energy required for a bus to operate. This is also one of the oldest maglevs to exist, being only the third in line after the Birmingham Maglev line and the German M-Bahn lines. 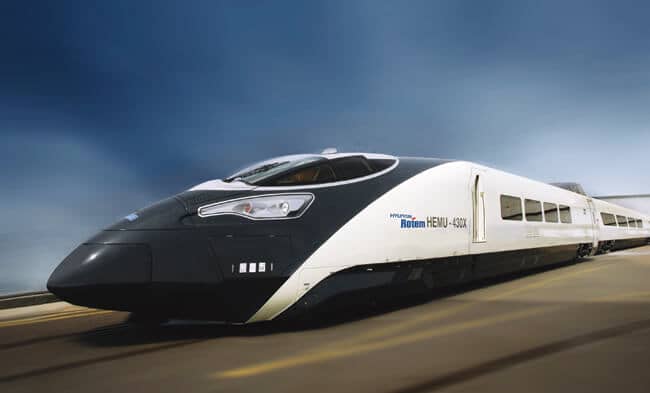 Introduced on May 17th, 2012, the High-Speed Electric Multiple Unit 430 km/h Experimental was manufactured by Hyundai Rotem. It’s presently operated by KoRail. This 484 feet train is an experimental train designed to achieve high speeds as fast as 267 mph. It puts South Korea on the list of countries operating a train with one of the fastest speeds.

During an experimental run on March 31st, 2013, the train achieved a speed of 261 mph and has been undergoing experimentation since then. Currently, the latest feature added to the train is the distribution of traction. It was supposed to be commercialized by 2020-21 through two versions, EMU-260 and EMU-320. 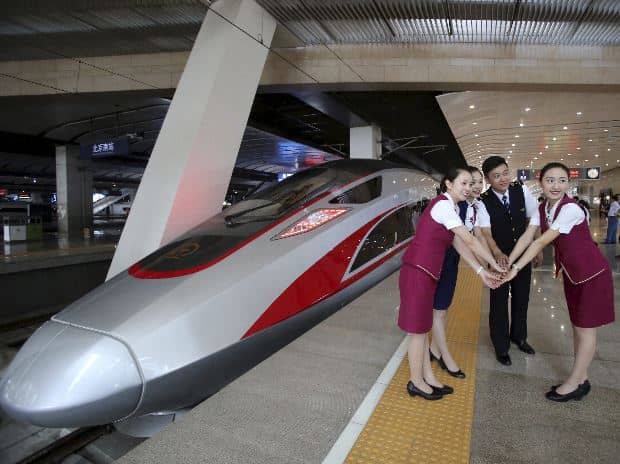 Fuxing Hao CR 400AF and BF saw the light of the day in June 2015. Both trains have an approximate length of 685 feet and were manufactured by CRRC Tangshan Railway Vehicles, CRRC Qingdao Sifang, and CRRC Changchun Railway Vehicles in collaboration. With a top speed of 260 mph, the train is currently operated by the China Railway Corporation.

The silver and red exterior of the CR 400AF is specially designed in a streamlined body to boost speed and restrict drag. It’s nicknamed the ‘Dolphin Blue’. On the other hand, the CR 400BF uses nose-like vitreous heads and is covered in gold and white, which speaks for the name, ‘Golden Phoenix’. Both the trains operate between South Beijing and Shanghai and were officially introduced for commercial purposes in 2017. 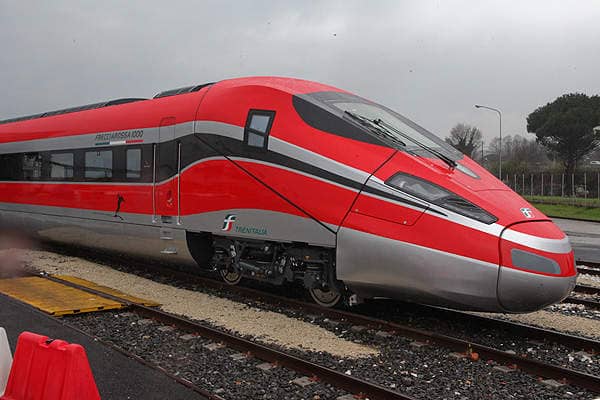 This 662 feet Italian train was first introduced on April 25th, 2015. With the highest speed of 250 mph, it is the seventh fastest train on the planet. Manufactured by the AnsaldoBreda and Bombardier Transportation, the train is currently operable under the management of Trenitalia. The train was qualified to reach the highest commercial speed of 220 mph initially, however currently operates at 190 mph under the name of ETR400.

Focussing on safety, interoperability, and comfort, the ETR400 is a passenger service over high-speed rail lines and offers long-distance services. Designed to create less noise, the Frecciarossa 1000 initiated its commercial journey on April 25th, 2015 between Milan and Rome. It is one of the high-speed trains in the world to receive an Environmental Product Declaration because of its ability to limit Carbon DiOxide emissions. The train is also capable of eliminating human errors while operating, thanks to the ERTMS/ECS technique. 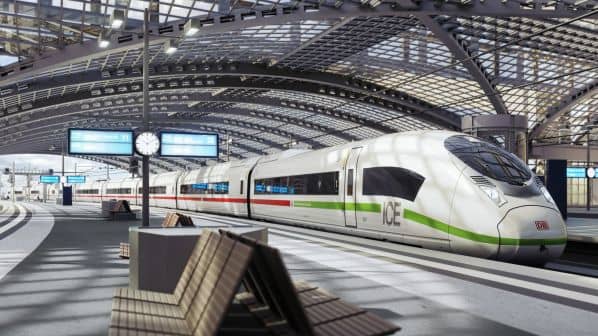 The Velaro is a set of various trains manufactured by the German company Siemens. With a varying length of 656 feet to 1280 feet, the trains are capable of achieving the highest speed of up to 250 mph. Initiated in 2006, the variants of Velaro are designed on demand for Spain, Germany, the UK, Russia, and China. Each commercial Velaro variant maintains passenger comfort while being environmentally sustainable and highly efficient.

There are currently five variants of Velaro, Eurostar, Velaro RUS, and Velaro D, designed for the UK, Russia, and Germany. While the other two variants, Velaro E and Velaro CRH are currently functional respectively in Spain and China. The trains are designed to run in low visibility conditions and stay operable during heavy snow seasons. 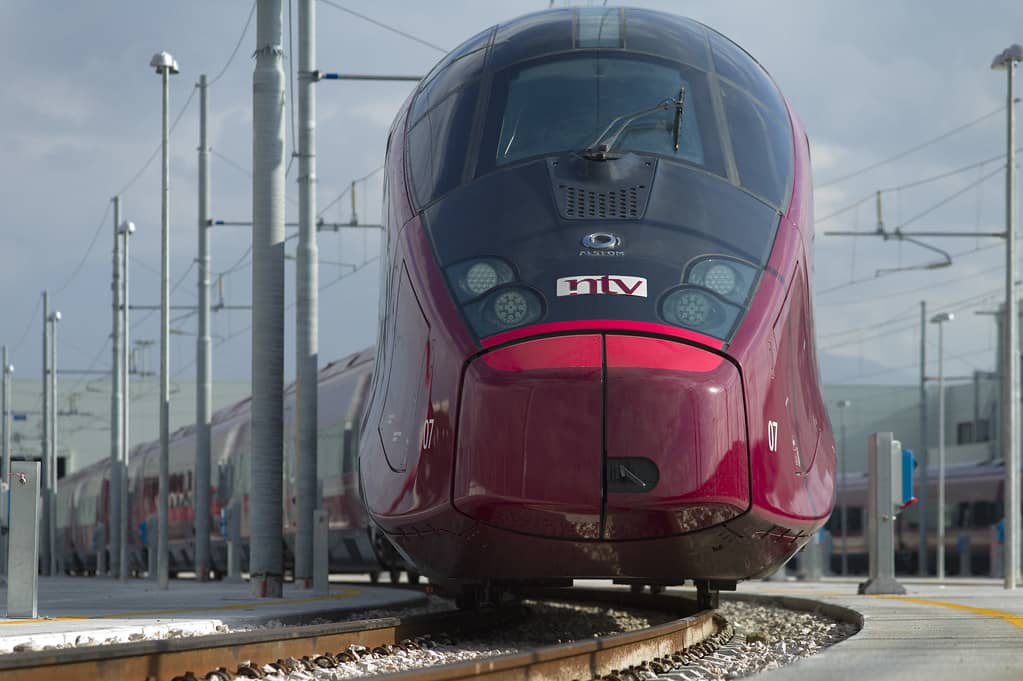 Initiated in April 2012, the Italo AGV is the first of many trains of the AGV Series. Operated by Nuovo Trasporto Viaggiatori, the trains were manufactured by Alstom and have clocked the highest speed of 224 mph. However, it commercially operates at the speed of 186 mph on multiple Italian high-speed networks.

Introduced in February of 2005, this 656 feet train was manufactured by the Spanish corporation, Patentes Talgo and Bombardier Transportation in collaboration. It has been able to achieve the highest speed of 217 mph, making it the tenth fastest train in the world.

Operating between Madrid-Valladolid and Madrid-Barcelona, the train started its commercial service with a different name, RENFE AVE Class102. Due to its resemblance to a duck beak, the train is also locally referred to as Pato. The train is structured and designed to handle severe air currents and high aerodynamic pressure. It has the ability to maintain a high level of redundancy within auxiliary and railway systems.

The initial trial runs were started in 2002 by the Spanish government with the help of a fully functional prototype. Later, it was constructed as a lightweight, airtight train body that is capable of passing through crossings and tunnels without any discomfort.

So, this was our list of the top fastest trains in the world. As these trains have been functional for a while now, it’s safe to say that the possibility of commercializing high-speed trains and their ability to function properly without mishaps is high. It is predicted that with technological development, we will reach even higher speeds in the future.