10 Must Visit Historical Places in Uttarakhand in 2022 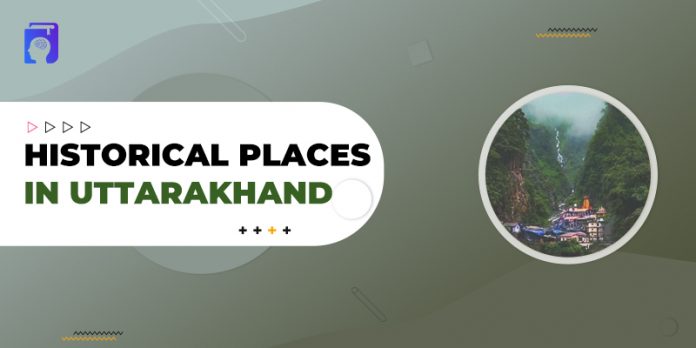 Uttarakhand blends nature, history, and spirituality to delight travellers. Every nook and cranny of the state has a rich “history”, marked by monuments and activities that trace their roots to some events in the past. Since their history is largely undocumented, the events are more mythological than historical. So, we need to take the stated “history” with a pinch of salt. That said, some historical places in Uttarakhand deserve a visit even if you have grown up disliking history.

DuniaKaGyan has picked the top 15 such places for your next vacation. Trust us, these sites are good enough to keep you intrigued and clamouring for more. Even if you aren’t a history buff, the awe-striking panorama of these sites will etch into your memory for a lifetime. 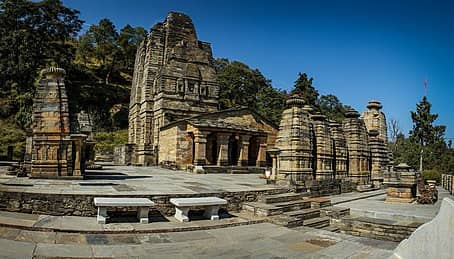 Feast your eyes on the intricate architecture of the bygone era at the Katarmal Surya Temple. The carvings and panelling throughout the temple premises are breathtaking, making you wonder how artisans back in the day did that without modern equipment. Guess what? Thanks to the exquisite wall carvings and panels, the shrine was declared a monument of national importance under the Ancient Monuments and Archaeological Sites and Remains Act of 1958.

Location: It is located around 1.5 kilometers from Kosi Village and approximately 12 kilometres from Almora, at an elevation of 2116 meters. It is easily accessible from Almora, with a 45-minute ride. The accessibility factor also helps in making the shrine one of the top Uttarakhand historical places.

History: You can trace the history of this temple to the Katyuri kingdom. It is attributed to the Katyuri king, Katarmal, and hence, the name. Constructed in the 9th century, it is ambient of 44 small temples around the main shrine that honours the deity Surya. A key idol in the temple went missing, following which the panels were shifted to the National Museum, New Delhi.

Dedicated to: It is one among the select few Surya (Sun) temples. Here, the Sun god is referred to as Burhadita or Vraddhaditya. The idols of Shiva and Parvati along with Lakshmi and Narayana also adorn the shrine. 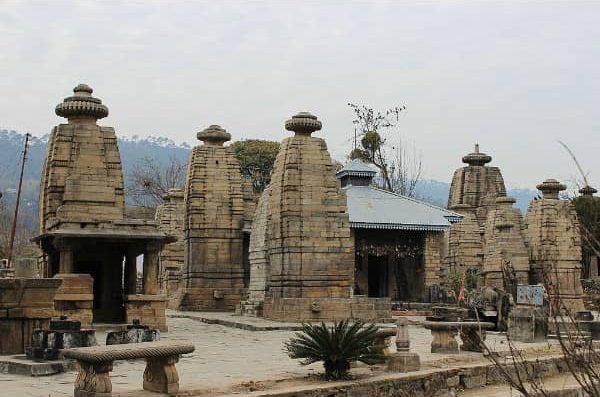 Think of this temple as one of the holiest sites in Uttarakhand. If legend is something to go by, this site hosted the divine wedding of Lord Shiva and Goddess Parvati.

Location: Nestled on the banks of the Gomati river, Baijnath temple falls under the namesake small town in the Kumaon division’s Bageshwar district. Situated 27 kilometres away, it is a roughly 40-minute drive from the Bagheshwar town.

History: It has been one of the most ancient temples in Uttrakhand since 850 AD. Founded by Narsingh Deo, the temple features monuments of National Importance as declared by the Archeological Survey of India. As such, you have a lot of history to discover and cherish here. 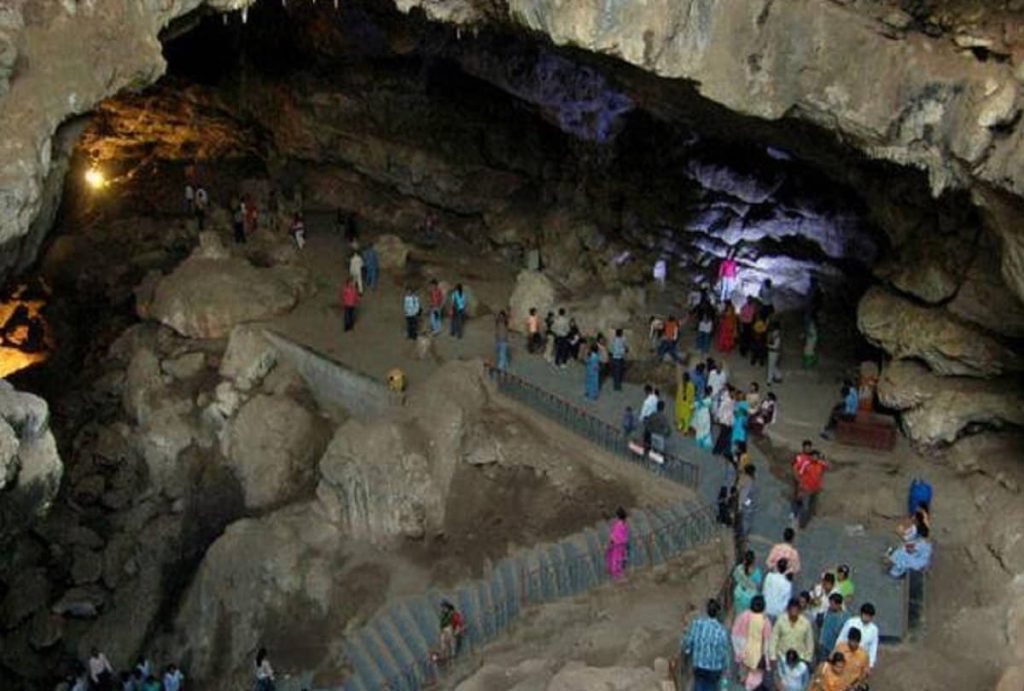 This cave temple has to be one of the must-visit historical places in Uttarakhand. Call it a complex structure of limestone caves 160 meters long and 90 feet deep from the entrance of the cave. The cave leading to the main shrine is not just a cave but a series of caves interlinked, paving the way to the main shrine. Per popular belief, one end of the cave opens at Kailash, the abode of Lord Shiva.

Location: The Patal Bhuvaneshwar cave is the cave temple located 14 kilometres from Gangolihat in the Pithoragarh district.

History: The cave was first discovered by Raja Ritupurna, the throne of the Surya dynasty, which ruled for a significant period over Ayodhya during the Treta Yuga. The cave temple welcomed its most celebrated visitor, Jagad Guru Adi Shankracharya in 1190 AD. had to wait till the KalYug to welcome 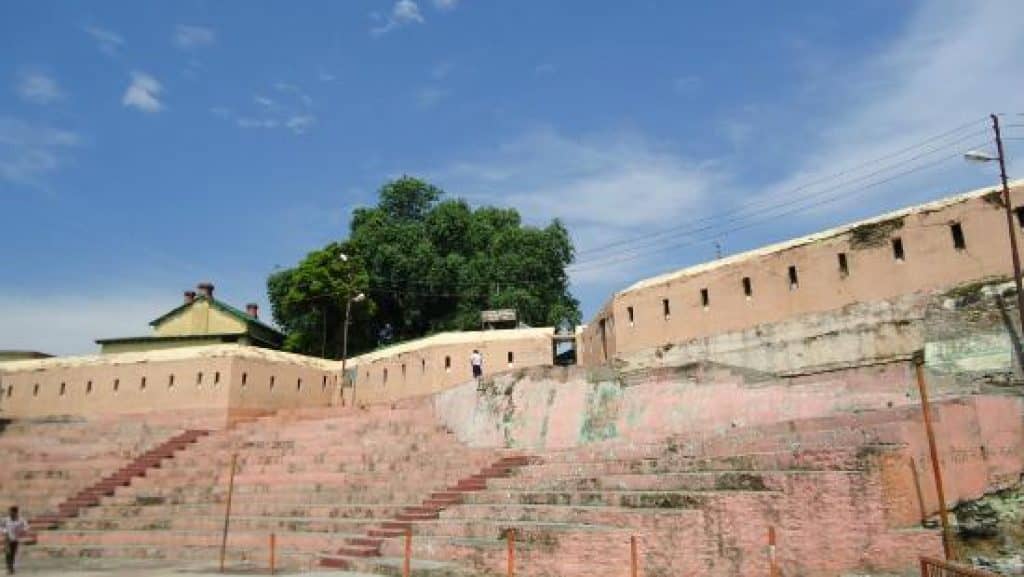 As a history buff, you simply cannot ignore the Pithoragarh Fort. After all, it’s one of the most historical places in India, let alone Uttrakhand. The fort presently is in ruins but the remains reflect the magnificence of its past. The Gorkha architecture is intricate and appealing while the environs are breathtaking. That’s why it is a delight for shutterbugs and architecture enthusiasts.

Location: The fort is firmly perched on a hilltop at an elevation of 1645 meters on the outskirts of the city. You can either take a 15-minute drive or simply cover the entire 15-km trek on foot from Pithoragarh.

History: The history of the fort is disputed. Some believe that the fort came up in 1789, thanks to a Chand ruler, Peru Alias Prithwi Gussain. On the other hand, some historians credit Gorkhas with building the fort. For them, the fort commemorated the Gorkha’s victory over the Pithoragarh town. 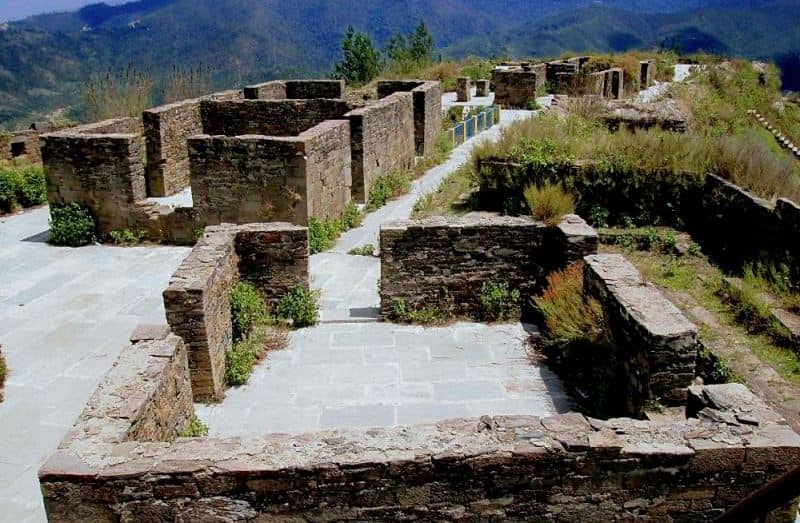 Banasur ka Kila comes across as one of the most frequented Uttarakhand monuments. Presently, the fort is just a shadow of its glorious past but has history and legends written all over its vast expanses. It reflects the architectural prowess our ancestors had attained back in the day. What adds to the fort’s significance is the fact that it is the site of the origin of the Lohaghat river.

Location: It is nestled on a hillock at a height of 1859 meters above sea level and 7 km away from Lohaghat in the Champawat district. You require to walk 2 kilometres to get to the fort.

History: There’s more mythology associated with the fort than actual history. While no one knows when the fort came into being, it is believed to be a medieval structure. The fort honours Banasur, an offspring of the mythological character, King Bali. The 1000-handed demon, Banasur eliminated Anirudh, the lover of his daughter, Usha. In retribution, Lord Krishna, Anirudha’s grandfather, defeated and slew Banasur after an intense battle. 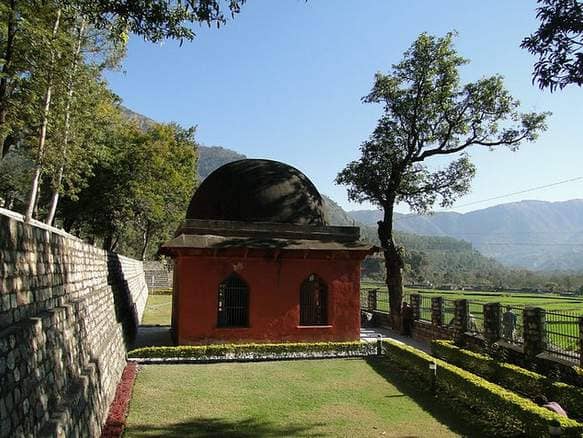 Kalsi makes it to our list of the historical places in Uttarakhand. Why? Well, it’s a treasure trove of history, offering a peek into ancient India. The place is home to Ashokan inscriptions carved on rocks that depict storylines about Antiochus, Ptolemy, Antigones, Magas, and Alexander. The rock edits of Khali are the most ancient and historically significant.

Location: Kalsi is located in Uttarakhand’s Dehradun district, on the banks of river Yamuna.

History: The place houses Ashoka’s Rock edicts in the Pali language. Mind you, these are the only edicts linked to Ashoka in North India. That’s why the place is a significant historical tourism site in Uttrakhand. 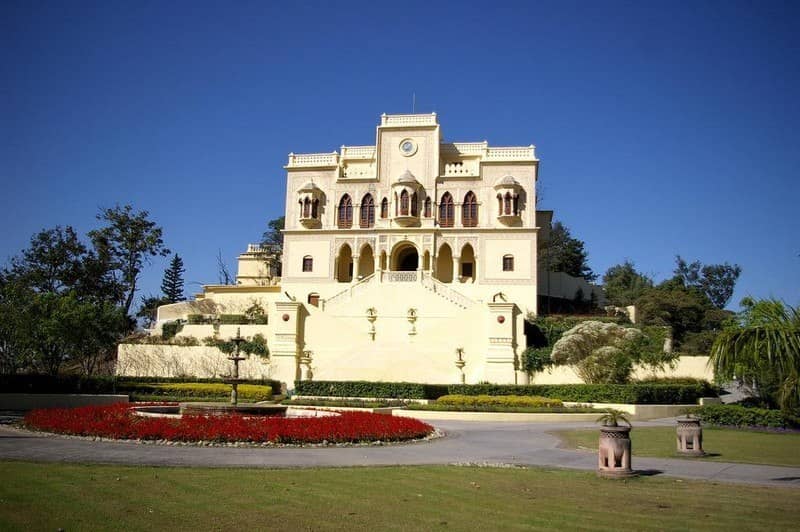 Crowning a picturesque ridge of the mighty Himalayan ranges, the palace symbolizes the grandeur of an era gone by. Odathila is a place of historical and mythological significance. It has been known to be a seat of spirituality and meditation since ancient times.

Location: ‘The Narendranagar Palace’ here now is home to ‘Ananda – In the Himalayas’, a destination spa that looks down into the Doon Valley from its majestic height of 3000 feet.

History: The present town of Narendranagar came into existence in 1919 when Maharaja Narendra Shah of Tehri Garhwal moved his capital from Tehri to a more picturesque locale. The small town of Odathila nestled in the Shivalik foothills was chosen not only for its extraordinary scenic beauty but also for its proximity to the plains below. 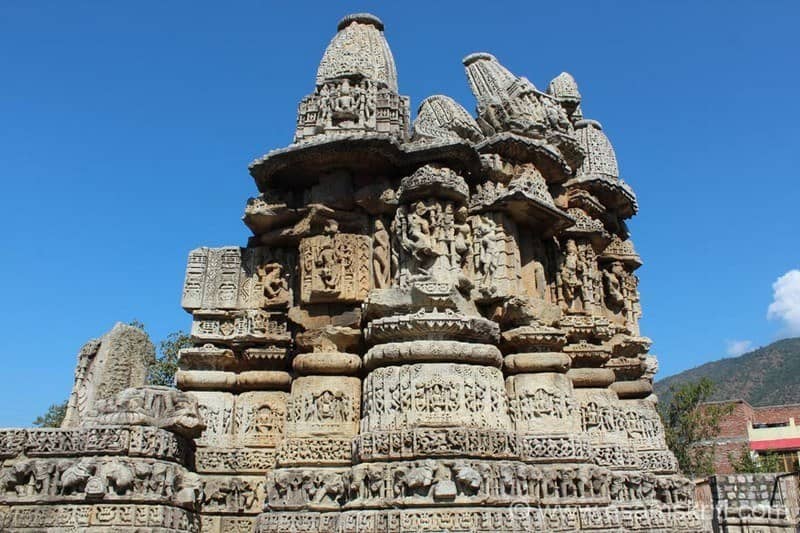 The “way to heaven,” Dwaraghat is no less beautiful than heaven itself. The serene hamlet in Almora is ambient of 55 temples, making it religiously, historically, and culturally important. These shrines are attributed to the Katyuri dynasty and the architecture bear a profound influence of the Gurjari School of Art. That makes them a godsend for architecture enthusiasts.

The most revered of them all is the Dunagiri shrine, nestled on the outskirts of the hamlet, 20 km away. Dedicated to goddess Dunagiri, a manifestation of Durga, the temple comes alive during Navratris when nine different forms of Shakti are celebrated on nine different days. The Bandev Temple, Kachiv Temple, Badrinath, and Lakhanpur are other visit-worthy temples here.

Location: The Dwarahat is located at an elevation of 1510 meters in Almora, where the Ramganga and Saryu rivers merge.

History: The archaeological digs revealed coins that indicate Kunindas to be the first settlers here. Their dominance was broken when the area was annexed by the Guptas who ushered in the Golden Age of ancient India. Later, Dwarahat was under Bacheri, Manigan, and Mrityunjaya dynasties at different points in time.

Mythology: The merger of the Ramganga and Saryu rivers irked river Kosi. The latter connived to separate them but failed. This attracted the ire of the two rivers who cursed Kosi to stay without any tributary. 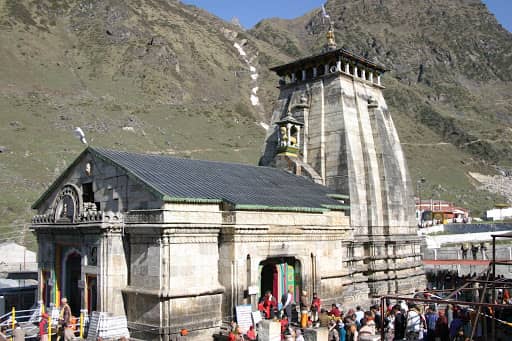 Welcome to Lohaghat, one of the historical places in Uttrakhand. Nestled in the Champawat district, the town derives its name from the very river that flows through it, River Lohawati. The picturesque and quaint town offers some of the most delightful views of the Garhwal hills blanketed in pristine snow. The lofty deodars just accentuate the overall charm of the town. The tranquillity is simply irresistible, making it an ideal destination to escape the hustle of cities and embrace peace.

Lohaghat has an array of trails that takes you to the wilderness, directly into the lap of Mother Nature. Feel free to set up your camp under the starry sky amidst soul-soothing greenery. Of late, it is attracting a deluge of adrenaline junkies keen on indulging in water sports. The town has its share of religious places as well, notably the Pancheshwar Mahadev Temple, 37 km away. Your drive to the town is an experience in itself, treating you to some stunning vistas all through.

Location: The town has an impressive elevation of 1754 meters from sea level. You need to travel around 62 kilometers from Pithoragarh to be in Lohaghat. It’s a wonderful two-hour drive.

History: The history and culture run deep in Lohaghat. Erstwhile Sui, the town is attributed to the Katyuri rulers in the 8th century. It remained the political and cultural capital of the Katyuris until the 10th century when Som Chand of the Kumaon kingdom conquered it. In 1790, the rampaging Gurkhas seized control of the town but lost it to the British in 1814. Mesmerized by the natural splendour, several Englishmen settled here and introduced tea and fruit cultivation. 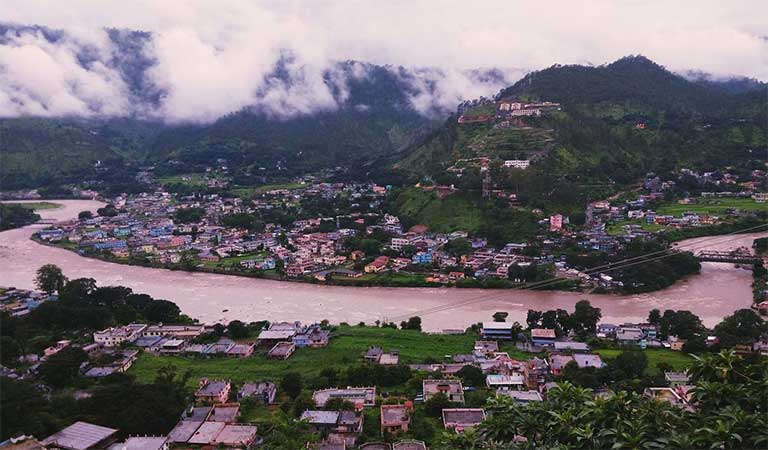 Bageshwar, the city, is of great religious, historical, and political significance. Bageshwar finds mention in various Puranas, where it has been associated with Lord Shiva. The Uttarayani fair held annually in Bageshwar used to be visited by approx 15,000 people in the early twentieth century and was the largest fair of the Kumaon division. The fair became the epicentre of the Coolie Begar Movement in January of 1921. The city of Bageshwar gets its name from the Bagnath Temple. Hindi and Sanskrit are the official languages; however, Kumaoni is spoken by many people.

The stories of every stone, shrine, a landmark can be understood when one sees the monuments as it allows the visitor to appreciate its historical beauty. These mentioned are the ones with great historic glories running inside them and standing still to date. Hence do let us know which one you thought is more historical.