Khimsar – The Hidden Dune Village of the Thar Desert 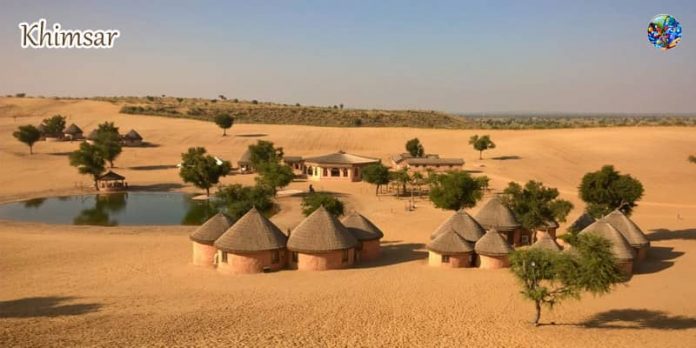 You might not have heard about Khimsar. Located at the very tip of the eastern side of the Thar desert in the Nagaur district of Rajasthan, Khimsar village is one of the remotest places in India. Also known as Khinwsar, Khimsar is around 92 km away from Jodhpur, the city of magnificent forts.

There isn’t much to write home about Khimsar, save for the vast stretches of wilderness and the Khimsar fort. It can be a dream destination for anyone seeking solitude from the cacophony of city life. If you are one of them, read on. We discuss everything you should know about this unassuming place. But first, let’s have a look at the Thar desert. 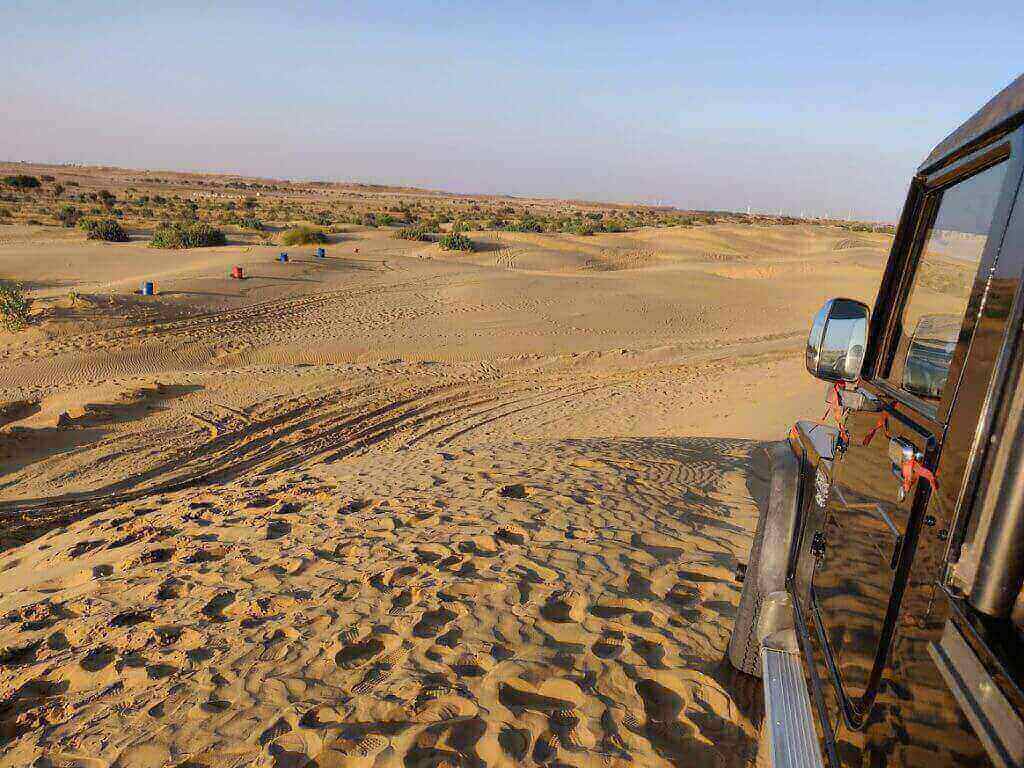 The Thar desert, known as the great Indian desert, is one of the largest arid regions in the world. Spread across 200,000 square km, it lies in the northwestern part of the Indian subcontinent, forming a natural boundary between India and Pakistan, the two hostile neighbors. Over 85% of the Thar desert is in India, while the remaining 15% is in Pakistan.

When it comes to size, the Thar desert is the 9th largest hot subtropical desert. It covers 4.56% of India’s total land, and more than 60% of it lies in the state of Rajasthan. The remaining part extends to Gujarat, Punjab, and Haryana. The east part of the desert where Khimsar fort is located has somewhat more precipitation and fewer dunes. 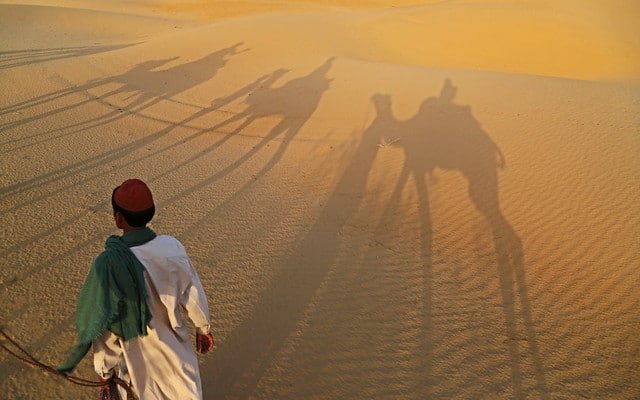 Well, some of these facts might be known to you, but some are completely out of nowhere.

Why is the Thar desert an arid land? Well, one reason is low precipitation. While a major part of India receives rain in the Monsoon season, there is no monsoon season for this region. The southwest monsoon winds, responsible for rains, bypass the Thar and move towards the east. This resulted in the subtropical desert climate that also has a persistent high pressure.

The dunes present in the Thar desert change their shape and size. After all, they are made up of sand. When the wind blows, the sand is carried from one dune to the other. As a result, the tallest dune today might not even be there by tomorrow.

The soil in the Thar desert consists of several types, including desert soil, red desert soils, and sierozems (brownish-grey soils). It also has red and yellow soils on the foothills, and the saline soils at the depressions, along with lithosols and regosols. 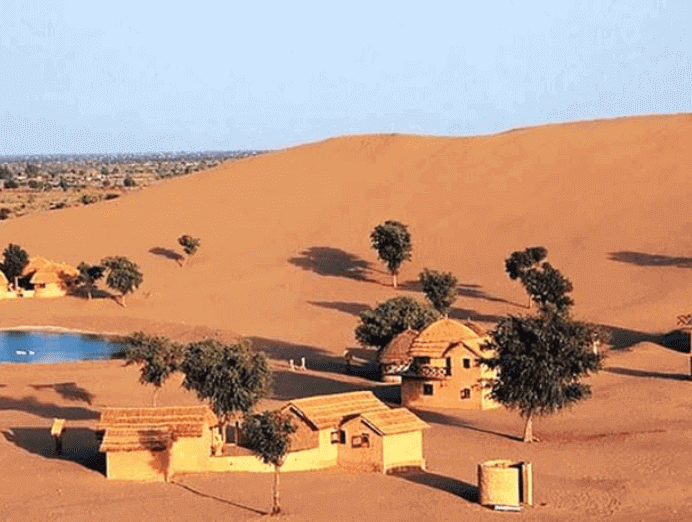 Most of the people living in and around Khimsar are from the rural area. They are distributed in various densities. When it comes to religion, both Islam and Hinduism are practiced. You will also notice a potpourri of complex economic and social groups.

The prominent language in Khimsar is Marwari, which is also popular in the central part of Rajasthan. Speaking of the ethnic composition, most of the people are Rajputs. Plus, there are other nomadic communities engaged in animal husbandry, crafts, and even trade. 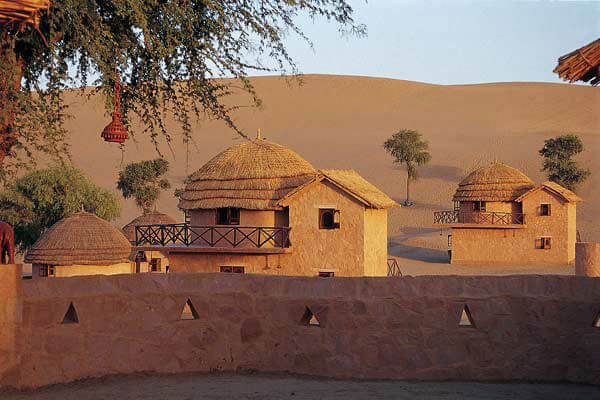 Well, this is a tricky part. Despite having the Khimsar Fort, which is a tourist attraction, the economic condition of Khimsar is not good. It is located on the edge of the desert with relatively low precipitation, making it unsuitable for cultivation. Most people live on poultry and meat of goats and even camels in some cases. The milk products are made from camel’s milk. Wherever the water is available, it is utilized efficiently.

Whatever the rain brings in during the Monsoon is saved in tanks and reservoirs. The water saved in these tanks will then be used for drinking and other domestic purposes. The groundwater is too deep and often saline. Apart from the wells and tanks, the canals are also used as the primary source of water in and around Khimsar. 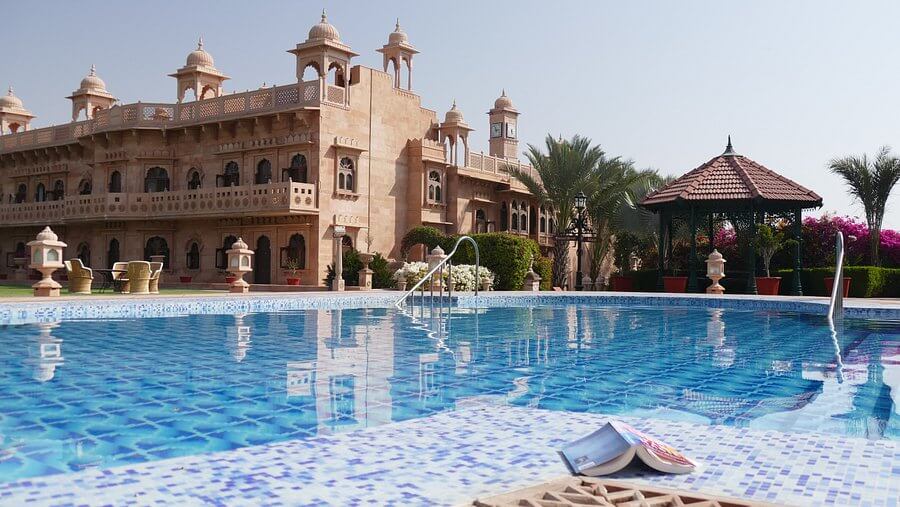 Let’s decrypt the story of Khimsar Fort, the biggest asset of the region. This 500-year-old fort is located on the easter edge of the Thar desert in the Khimsar village. The Mughal emperor Aurangzeb used the fort during his rule. The fort has been taken over by a hotel group and has now been transformed into a heritage hotel.

The eighth son of Rao Jadhoaji and the founder of the Jodhpur, Rao Karamsiji ordered the construction of the fort. The location of the fort is strategic, just between Jodhpur and Nagaur. Considered one of the best places ever to be built on the north side of the country, the fort offers an enthralling experience to its visitors.

The royal family that owns the fort is the sole runner of ITC Khimsar fort’s heritage hotel. The staff members are the descendants of the courtiers of the royal family. This fort has seen tons of wars in all its existence, but it is standing tall on the east side of the hottest part of the country.

The walls of the fort are high rising turrets and have war scars on them. But still, these walls are pretty magnificent. In recent years, the fort was bestowed with the honor of being the Grand Heritage Award for excellence by the Department of Tourism of India. This led to the fort being recognized as the best of the best in the field of hospitality.

In the 18th century, a new wing in the fort was built, which is now known as zenana or the ladies’ wing. Once this portion of the fort was built, the royal family moved in. In the 1940s, another construction work took place under the guidance of Thakur Onkar Singh.

If you are looking to live a life king size, ITC Khimsar is the right place to get that first-hand experience. Anyone who is coming to Khimsar must visit the hotel at least once to see the true grandeur of the Rajput tribe.