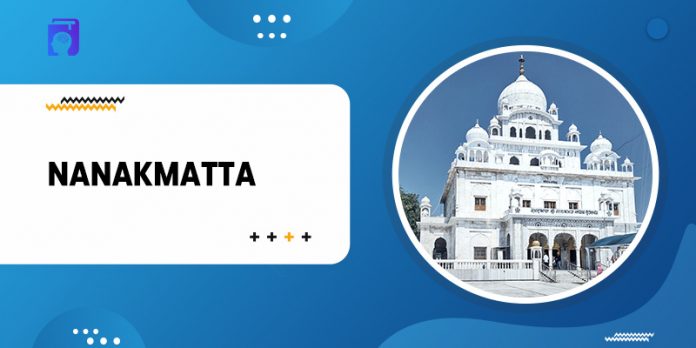 India has also been the birthplace of many religions, including Sikhism. Founded by Guru Nanak around the early 16th century, Sikhism is a blend of Hinduism and Islam. His teachings and his way of living inspired millions of followers. Today Sikhism is the 5th largest practiced religion in the world. Guru Nanak traveled across Asia to spread his message of “Ik Onkar” or God is one. During one of his journeys, he meditated at a place on the Tanakpur-Rudrapur route in Uttarakhand. They call it Nanakmatta, one of the holiest places for his disciples.

Let us go into detail about the town, its history and what to do and explore.

Nanakmatta is an area of great religious significance, particularly for Sikhs and it is home to a well-known Gurudwara and a reservoir. You will find it in the Udham Singh Nagar District as a place of unending grandeur, immersed in history and culture.

Previously, the area was inhabited by yogis and sages who were devotees of Guru Gorakhnath, which retained spiritual significance with the Gurudwara Nanakmatta Sahib. Guru Nanak Dev, the 1st Sikh Guru, is said to have come here to contemplate. A nearby dam is also a famous tourist site, and it’s a great place to go angling.

Located on the Rudrapur-Tanakpur highway, the town is embellished with numerous Gurudwaras, each with its own narrative and significance. Thousands of pilgrims come here to worship. Nanakmatta is a must-see destination for anyone seeking serenity and compassion.

History and Significance of Nanakmatta

Nanakmatta is located on the bank of the Deoha River, which has been impounded to form a picturesque reservoir known as the Nanak Sagar. They believe that Guru Nanak Dev visited here in 1514 during his 3rd udasi and engaged in contemplation and preaching. Previously, the site served as Guru Gorakhnath’s house of devotion and was known as “Gorakh Matta.” Guru Nanak Dev was so enamored with the town’s charm that he poured his blessings here, resulting in the establishment of Nanakmatta.

Story – When Guru Nanak first came, the yogis greeted him with great respect and offered him to join their sect, wear their attire, and become a yogi. Guru Nanak did not yield to the offer. Instead, he taught them that a life of solitude that does not benefit their fellow people is meaningless.

Guru Nanak meditated under a Peepal tree near the current site of the Gurdwara. The yogis were startled to find him there because this location was unreachable, particularly during the winter. Due to the frigid weather, Bhai Mardana requested assistance from the yogis in starting a fire. They, however, declined to assist Bhai Mardana. The yogis, on the other hand, mocked him and advised him to go seek his Guru.

The yogis recognized their error and prostrated themselves at the toes of the Guru. They all assembled the next morning and came to Guru Nanak Ji for a religious conversation. They employed their occult powers once more to try to lift the pipal tree out of the ground beneath which Guru Ji was seated. Guru Ji merely laid his palm on the branch when it had ascended a few feet and it stopped rising.

The same tree still stands tall within the Gurdwara complex. Guru Ji walked the yogis through the path of pure meditation and enlightenment. This location became known as ‘Nanak Mata,’ and a prominent udasi center.

Nanakmatta, being in the lower region of the Uttarakhand State, experiences a typical Northern Central climate type of the Indian subcontinent. The weather in Nanakmatta can be classified into three types.

The Summers usually last for about 3-4 months from April to June. The weather is hot, with temperatures reaching Forty degrees Celsius. This is not an ideal period to arrive because the hot weather will interfere with your touring plans.

The area has significant rainfall and humid temperatures, making it prone to landslides. A visit during this period necessitates taking the proper safeguards. Temperature varies from about 24 degrees Celsius to about 34 degrees Celsius.

This is an excellent time to visit as the weather is quite favorable. The months of December to January are bitterly cold. Average temperatures range between 8 and 16 degrees.

Places to Visit Around the Town

You have plenty to explore in Nanakmatta, Uttarakhand. Here’s your checklist: 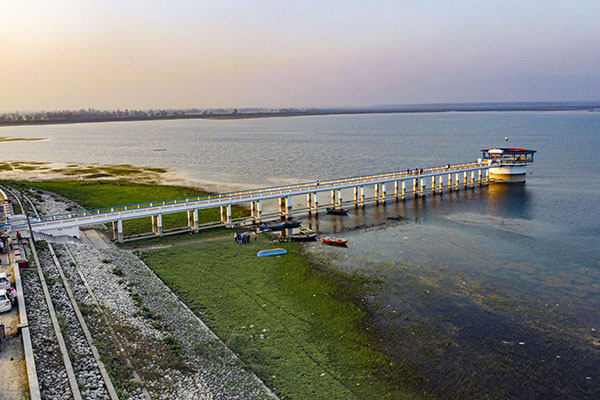 The NanakMatta Dam is among the area’s most popular landmarks. The dam constructed on the Saryu river, which finally formed Nanak Sagar, functions not only as a dam but also as a location for people to unwind.

In fact, the lake is a beautiful site for picnics, boating, and fishing, and it adds to the attractiveness of this quaint town. The serene water of the reservoir and the quiet air combine to create a relaxing atmosphere. The dam is roughly 54 kilometers from Rudrapur. 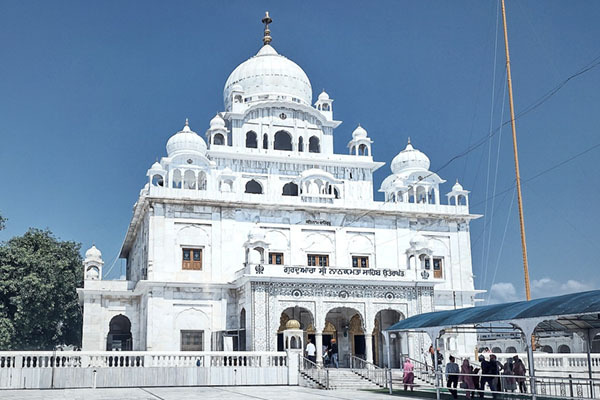 The Gurudwara Nanak Mata Sahib, located in the center of town, is a settlement in Nanakmatta, on the Khatima-Panipat Road, between Khatima and Sitarganj. In the district of Udham Singh Nagar, it is 18 kilometers from Khatema and 12 kilometers from Sitarganj. It is one of the 3 holy sites for Sikhs and is associated with Guru Nanak Dev, the 1st Sikh Guru, who visited there in 1514. During that time, this Sikh temple was called as Gorakhmataa or Gorakh Math and was the holy home of Guru Gorakhnath’s disciples. 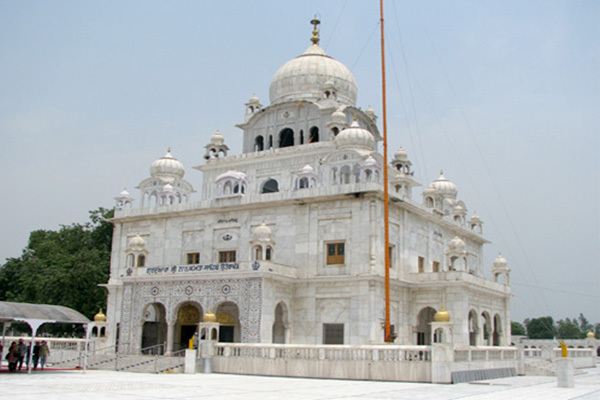 It is around 5 kilometers from the downtown area. This location is associated with an intriguing legend. Doodh Wala Khuan, which means “Well of Milk,” is situated near Nanakmatta Gurudwara. According to the narrative, when Bhai Mardana conveyed his need for milk to Nanakji, Nanakji advised him to ask the Yogis who had a huge number of cows.

However, the Yogis declined his plea, accusing him of insulting his teacher by requesting. Guruji then made their cows bereft of all the milk, which was transferred to a well through some supernatural skills. This location is known as Doodh Wala Khuan. 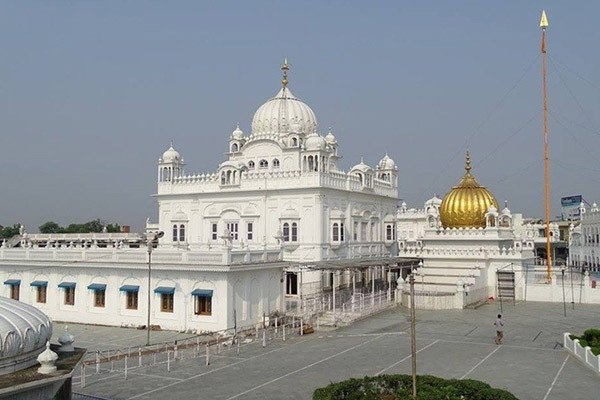 Perched on the banks of the Ghaghar river, it is a tourist attraction. As per folklore, the Yogis used their magical powers to dry up the water in the area and challenged Nanak Dev Ji to bring it back. Nanak Dev Ji then assigned this chore to Bhai Marada, instructing him to drag the spade after him to retrieve the river. He completed the duty, and the river followed him till he turned around to check on the river. Suddenly, the water came to a halt here, and Guru Dev Ji requested the Yogis to finish the remaining assignment using their magical powers. This made them realize their error, and a Baoli known as Baoli Sahib was built as a result. It is in the vicinity of Nanak Sagar Dam, just 2 km from the main shrine. 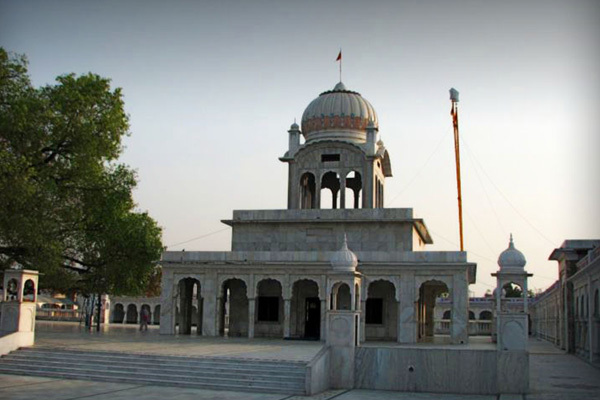 It is around one kilometer from the downtown area. Almost every location in this area has a fantastic story to tell, making it a highly spiritual location. Nanakji pondered under this dried Peepal Tree, turning it green with his divine powers.

When Yogis observed him meditating in this difficult location, especially during the winter, they were envious. They attempted to remove the tree using their magical powers in order to upset him. As the tree began to draw away, Nanak Dev ji placed his hands on the roots, allowing the tree to be pulled away. The root of the tree may now be seen above soil.

A hundred years down the line, Bhai Almast ji or Guru Har Gobind Sahib ji came to the spot. In retaliation, yogis set the tree ablaze. He rebuilt the site as a holy sanctuary and restored the Peepal Tree back to full blossom by spraying saffron on its roots.

Things to Do in Nanakmatta

Apart from the holy pilgrim sites, you can indulge in other activities around the town.

Birdwatching- During the wintertime, the waters of Nanak Lake attract a variety of migratory birds, enticing ornithologists, nature enthusiasts, and photographers equally.

Water activities- Boating and fishing are popular activities for vacationers and travelers who visit the Nanakmatta dam. The area around the reservoir also has a lovely picnic space.

The town lacks an airport or rail station. The closest airport is in Pantnagar. You can then hire a cab from here. The closest railway station is at Khatima, and the place receives buses from most urban centers in the state and beyond. State-run UTC buses, private jeeps, and taxis travel to and from Nanakmatta on a routine basis.

Jageshwar has a wide variety of hotels, guest homes, and motels to suit all budgets. Hotels in Jageshwar are few and far from the main town area.

The food around the town is usually available at Dhabas and multi-cuisine restaurants. You can, however, enjoy the langars at the Gurudwara, which is totally free and of course delectable.

The best months to visit the city are November-December and February-March. The monsoon period, which lasts from September through October, is characterized by excessive rainfall and, as a result, landslides. Overall, avoid visiting Nanakmatta during summers and monsoon seasons due to harsh climatic conditions.

The calm and the mystic ambiance of Nanakmatta enables the visitors to sink into their souls and awaken their spiritual side. The setting will captivate you and leave you desiring for more. The Gurudwara and the attractions are great for a spiritual weekend vacation with family and friends.

What is famous about Nanakmatta?

Nanakmatta is a prominent Sikh pilgrimage site, as well as a renowned destination for bird watching, sightseeing, and picnicking.

What is not so good about Nanakmatta?

The monsoons and summers are not a good time to visit as the scorching sunburns you down and landslides make it difficult to travel.

What is the distance between Delhi and Nanakmatta?

The journey between Delhi and Nanakmatta is around 315 kilometers and usually takes around 6 hours to accomplish.

What is the previous name of Nanakmatta?

According to local legend, the area was previously known as Gorakh Mata before being renamed Nanakmatta upon the arrival of the Sikh guru.

Are there any hotels in Nanakmatta?