Osian- A city for Boat Ride 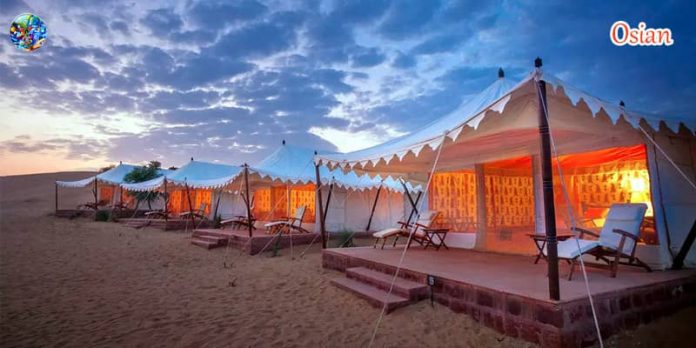 When thoughts turn to Rajasthan, what comes to mind? Perhaps, the desert, forts, jeep safaris, sand dunes, varied art forms, and whatnot. If a camel ride is missing, let’s put it on your radar. Join us, we take you through Osian, a small town in a state famous for its desert and heat.

Osian or Osiyan is located in the heart of Rajasthan, covered with golden sand dunes and hamlets. It is a small town around 65 km from Jodhpur, reachable by road in just 2 hours. It attracts a deluge of visitors all year round thanks to the presence of some impressive Hindu and Jain temples. For many, this quaint town is the Khajuraho of Rajasthan.

Osian has historical relevance. It was one of the prominent trading centers in the heavy days of the silk route, between the 8th century and the 12th century AD. The place was also a significant pilgrimage destination for the worshippers of the Gurjara Pratihara. He was a famous ruler who ruled a substantial part of North India from the 6th to 11th century. They also call him Upakesapura.

Osian is home to 16 Jain temples. The most famous Osian temple is the Mahaveera Jain temple. Other notable mentions include the Sun temple and Sachiya Mata temple. Most of these temples were made back in the 8th to 11th centuries. While all these stone-carved temples are beautiful, the temples of Lord Mahavir stand out for their grace and intricate architecture. However, most of the Jain temples are now in ruins. No new construction has yet emerged on the sites of these derelict temples for the fear of hurting the religious sentiments of the Jain community.

The Beauty Of Osian

Let’s find out why Osian is considered the best offbeat location in Rajasthan. 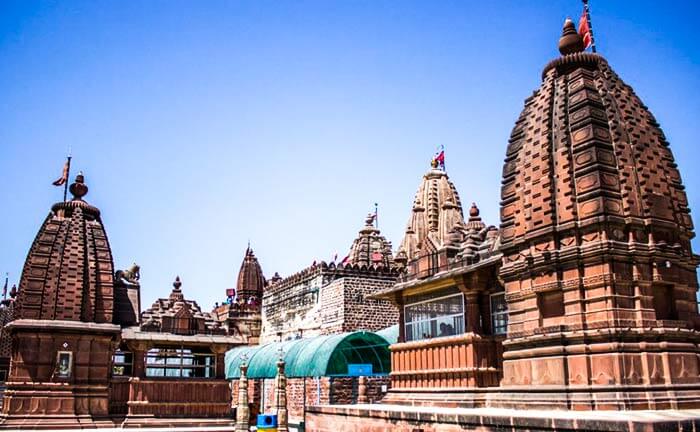 This temple is located on the hilltop, on the northeast of the Mahavira temple, which is a revered pilgrimage site for the Hindus. The Sachiya Mata’s temple is dedicated to the wife of Lord Indra. This goddess is equally significant to the Hindus and Jains.

Reaching the central premises of a temple requires you to climb 100 steps. Once you are there, you will witness some fantastic views of the temple and the surrounding sand dunes. The temple has some elegant arches all along the way to the main room, where the idol of the goddess resides.

It also features a myriad of carvings along with sculpture that captures the aura of this majestic place. At the end of the north complex, you will be greeted by the sculpture of Varaha, which is called boar in English. This is another incarnation of Lord Vishnu. Also, on the right-hand side, you will find the image of Laksmi along with Vishnu. 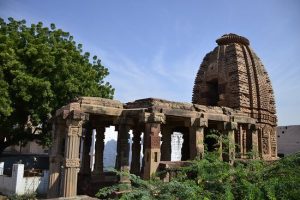 The name Surya in Hindi means Sun God. As expected, the Survya Temple has the idol of God Surya, along with Lord Ganesha and Durga. This temple is the reason why the Osian is also called the Khajuraho of Rajasthan. The Surya temple also has images of serpents around the lotuses. These images are also present on the ceiling of the temple.

The detailing on these images is a sight to behold with every single texture of the serpent’s skin coming out nicely. In addition, near the temple, you can also find a mandap used for weddings and other religious purposes. The structure and architecture of this Osian temple Jodhpur are pretty similar to the Sun temple located in Ranakpur. 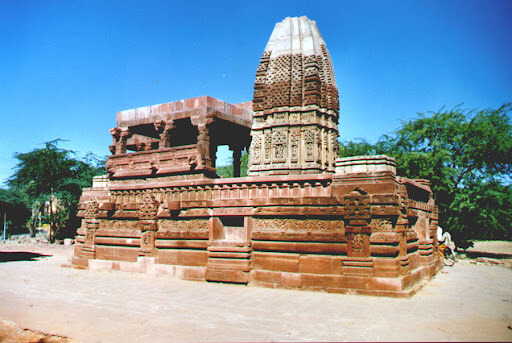 Kali temple, located in Osian, is an old infrastructure with a history dating back to the 8th century. The temple is dedicated to Kali, the goddess symbolizing empowerment. The temple might seem to lack the magnificent architecture of the other temples in Osian.

However, your perception might change once you consider how old the temple is. It was built in the 8th century when it was one of the most iconic structures in and around Osian. The temple has pleasant surroundings that can instil peace and tranquillity in you. 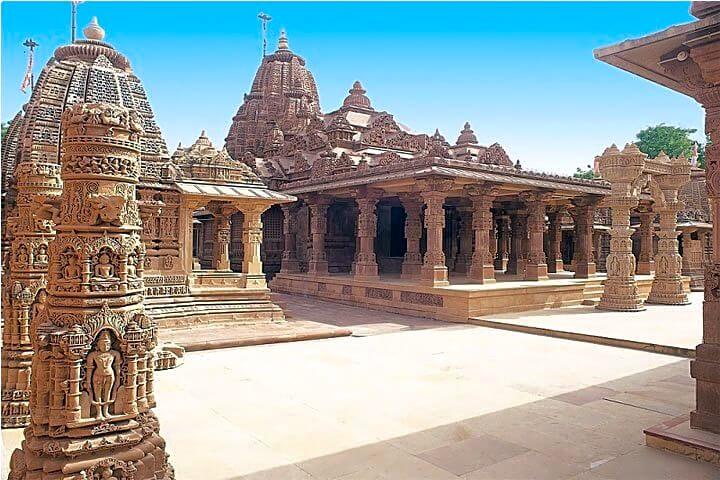 The Mahavira temple was also built in the 8th century to honor the 24th Jain Tirthankara, Lord Mahavira. At the center of the temple is placed a massive 32-inch gigantic sandstone of Lord Mahavira, depicting him in the padmasana posture. The main chamber of the temple, called sanctum sanctorum, has 8 small shrines placed all around in the courtyard.

All 8 of these shrines feature small sculptures depicting the life of Lord Mahavir and the teachings of Jainism. The level of peace that you feel inside the temple is something to write home about. Just 100 meters away from Mahavira temple is the Sachiya Mata temple. 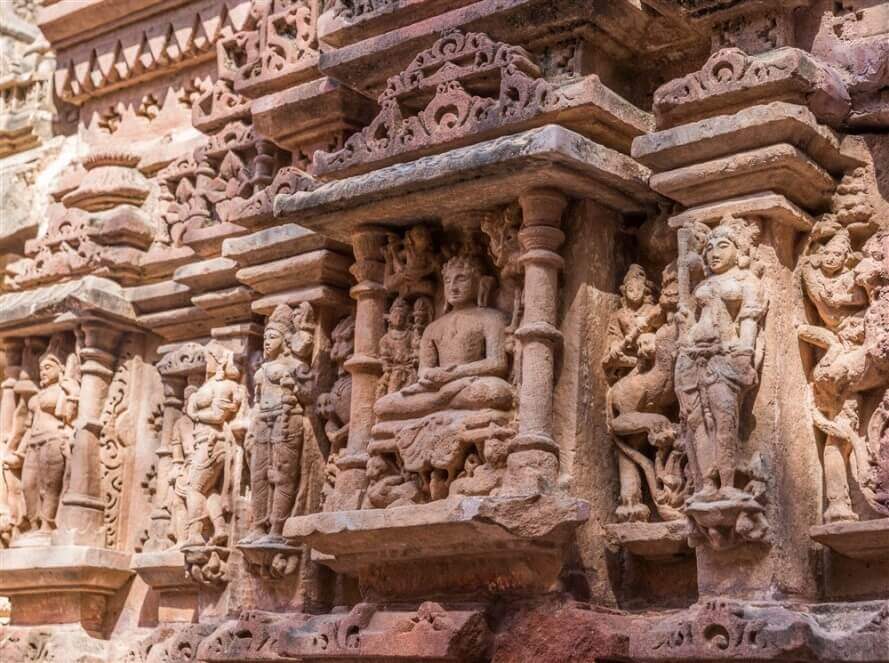 Harihara temple is not just one temple but a conglomeration of three temples dedicated to Lord Harihara. These temples are located on the southern end of Osian. Each features some breathtaking artistry to stop you in your tracks. Also, the design and how beautifully the sculptures are placed on the wall make this temple stand out. 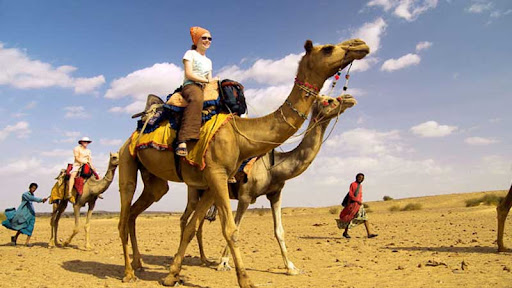 Even if you aren’t a believer, you have a reason to visit Osian Rajasthan, a camel ride that is. For avid camel riders, it’s the first and the last thing you want to do here. No matter how many times you do it, you’ll love to do it again and again. It’s just addictive.

A camel ride is sheer joy in a city surrounded by the vast expanses of arid land. Just take a camel ride into the wilderness and feel the tranquillity that cities can ill-afford. The camels are trained and the cameleers are friendly. So, your safety issues are well taken care of.

How To Reach Osian?

Forget about flying direct, as Osian India doesn’t have an airport. Even if you take a flight to Jodhpur, you still need to take a cab or a bus to reach Osian. So, we would advise you not to book a flight. The same is the case with the train. The town isn’t connected by railways.

Instead, travel by road. You don’t have to change any vehicle or mode of transport as the roads are pretty well connected to the rest of the state. It’s all in all a smooth ride.

However, you will be driving through a deserted area, especially at night. Help might not be in sight if you have a flat tyre or an engine breakdown. You are better off covering the distance in the morning and or during the day. From Jodhpur, it is just a 2-hour drive. Waking up early in the morning and then driving towards Osian is a great experience as the weather is usually pleasant, and you can feast your eyes on the beautiful countryside.