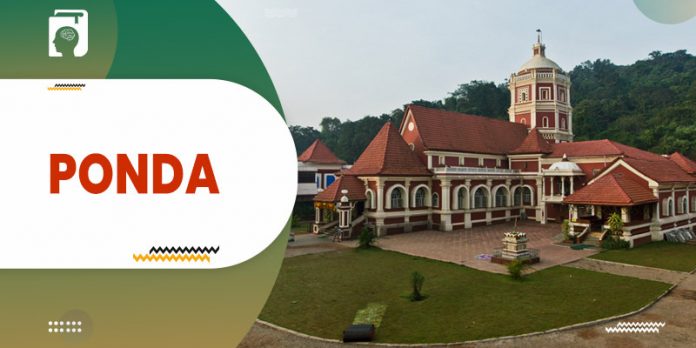 Popular mostly for its breathtaking views and serene beaches, Goa has a lot more to offer. The mystic beauty and charm of this place are surprising and are much more quaint than expected. Such one surprise is Ponda – land to many temples and gorgeous conservatories. For those who are fond of exploring hidden or rather less-preached destinations, Ponda is a must-visit place.

With an exquisite combination of architecture to mesmerize with beauty and calmness, Ponda has a different vibe. Let’s dive deeper into the captivating beauty of this place.

Ponda, also known as Fondya, is a city in India’s North Goa region. Ponda is located 17 kilometers (10.6 miles) northeast of Margao, the district headquarters, and 28 kilometers (17 miles) southeast of Panaji, Goa’s capital. Ponda is located along National Highway 4A, connecting Panaji with Belgaum, Karnataka, in the adjacent state.

Because of its numerous historic temples and rich cultural legacy, Ponda is also known as the land of Goddesses due to several deities residing in holy architectural marvels.

Why is Ponda Known as a “Goddess” Place?

The city has got its name due to massive and spectacular clusters of temples and goddess places. The temples of Lord Mangesh (Shiva), Lord Nagesh, Lord Ganapati, and Lord Ramnath, as well as the deities Mhalasa and Shanta Durga, who have been associated with culture, music, theater, and poetry, are all located in Ponda.

Another cluster can be found in the nearby taluka of Quepem, to the south (Chandreshwar Bhootnath Temple at Paroda, Damodar Temple at Zambaulim, and Shantadurga Temple at Fatorpa).

Finally, the most famous cluster is in the areas of Farmagudi (Gopal Ganapati Temple), Veling (Anant Narsinha Temple), Mardol (Mahalsa Narayani and Manguesh Temples), and Marcel, which are all located north along the Panaji highway (Devaki Krishna Temple).

Home to Many Religions

In and around Ponda, numerous Hindu temples are making it a place ideal for Hindu religion devotees. Shri Manguesh (Shiva), Shri Nagesh, Shri Ganapati, Shri Ramnath, and the Goddesses Shri Shantadurga, Shri Mahalasa, and Shri Mahalaxmi all are situated here that too within walking distance.

Along with this, the city also has some other churches to serve you a serene trip to churches.

The famous Safa Masjid, about 2 kilometers from Ponda’s city, was founded in 1560 by Bijapur monarch Ibrahim Adil Shah I. It is one of the only two sixteenth-century Islamic monuments in Goa that have escaped the Portuguese Inquisition.

King Sripala founded the settlement of Bandivade in Ponda. He also constructed a Jain temple dedicated to Neminatha in Ponda.

Places to Explore in Ponda

Ponda is not a typical Goan tourist destination. Therefore, it has a lot of unusual yet beautiful and magnificent places to explore. One can visit a range of churches, temples, palaces, and whatnot!

Let’s explore some of the Ponda’s exotic destinations: 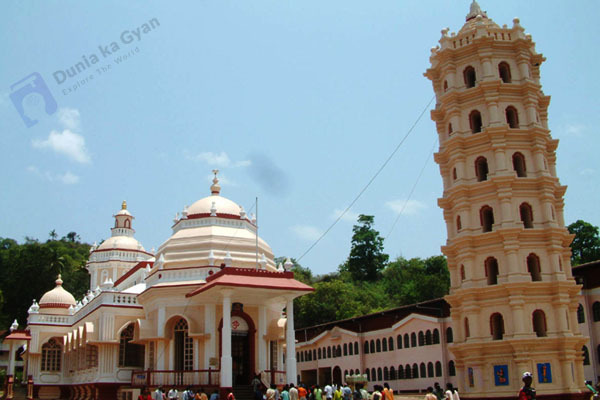 It is an Indian royal palace. The grandeur of this palace is linked to Ponda earning the name “Antruz Mahal”. Ponda’s popular name; “Goa’s Hindu heart” is also accounted for owing to the popularity of Antruz Mahal.

The palace is well connected to food joints and other eatery options. 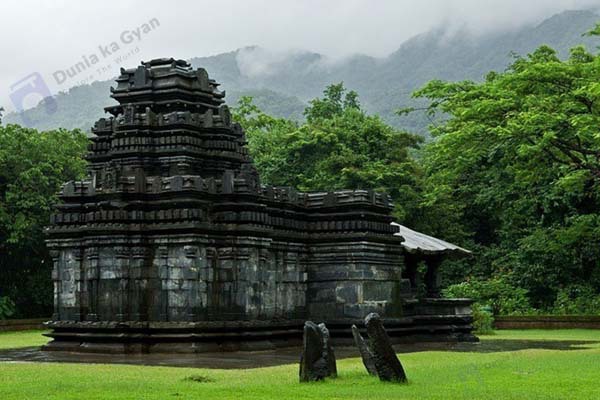 Tambdi Surla mandir is one of its kind in Ponda. To begin the tour of this holy place, enter the Bhagwan Mahavir Wildlife Sanctuary through the Balkonem (Sancordem, Darbandora) gate to see this legendary 12th-century wonder from the old Kadamba Dynasty.

The lawns and brilliant flowering plants remind of a traditional small Japanese garden, with vast forested mountains towering in the background. With its scenic location of a finely groomed garden surrounded by a deep forest, this temple carved in black basalt stone transports visitors in time and place. 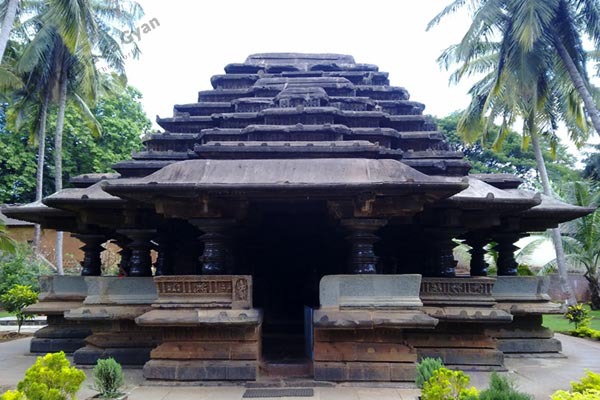 Begin driving west towards the largest cluster of six temples, you will find this beautiful class of architecture; Kapileshwar Temple. Kapileshwar temple is an 18th-century temple that is relatively simple. The typical red laterite-rock architecture of Goa is well highlighted in its architecture and adds to its rustic beauty.

This peaceful temple, dedicated to Lord Shiva, offers a vast open space as soon as you pass through its arched gate from the main road. The Garbhagriha, or sanctum, is placed inside a gorgeous dome-shaped structure, while the mandapa has an attractive gable-style roof.

At the entrance, old ladies sitting on a tiny flight of stairs at this entrance greet guests by selling flowers, incense, and coconuts which are later donated to the deities inside. The courtyard has a little altar with Tulsi or holy basil plant.

As it is popular in Hinduism to revere trees or natural flora, Therefore, one can easily find Tulsi not only in temple courtyards but also in private homes across the country. Tulsi is also placed at the top of the totem pole.

As the temple celebrates Monday as Lord Shiva day, a massive crowd gathers here every Monday. 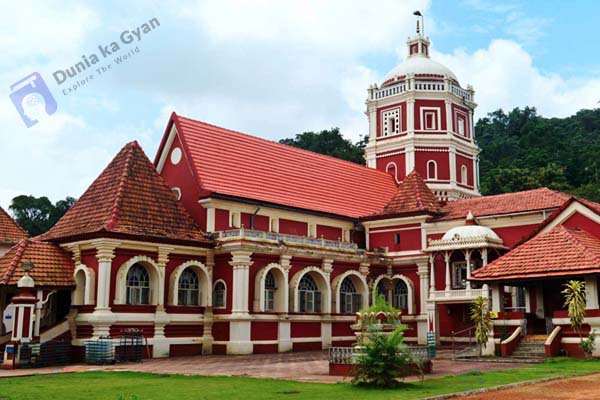 Goddess Shantadurga, commonly called Goddess Santeri, is the patron deity or Kul Devi. This is followed by many families in Goa and is undoubtedly one of the most popular deities.

Devotees assign her as the one who settles disputes and brings people together. The story behind this is an ancient time tale when Lord Brahma once asked Goddess Parvati to mediate a fierce conflict between Vishnu and Shiva.

To complete this task, she assumed the Adishakti (primordial power) incarnation of Shantadurga. This is a one-of-a-kind representation whose unusual name is a combination of Shanta (calm) and Durga (a powerful and furious form of the Goddess).

In 1738 CE, when the Marathas took over the territory, Chatrapati Shahuji Bhosle built this temple. The temple is built with great design and architecture. The moment you enter the complex after traversing a pathway close to a small lake, a large open area separates the main building from a lovely Deepa Stambha or lamp tower in front.

The historical information of Mandir is beautifully displayed on a hidden stone plaque at the street entry to enlighten devotees. 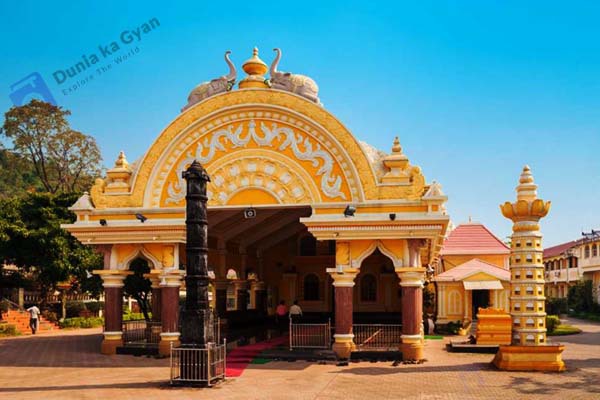 Mahalaxmi Temple of Ponda is a Hindu temple devoted to the Goddess Mahalaxmi. The presiding deity of Panaji Village is housed in this temple, which is one of the most renowned and visited Hindu temples in North Goa.

Mahalakshmi, who wears a linga on her head, is revered as the Goddess of Wealth and Peace. Around 18 holy images depicting sects from the Holy Bhagavad Gita can be found in the sanctum of the Mahalaxmi temple. Goa’s Mahalaxmi Temple attracts a large number of pilgrims throughout the year. 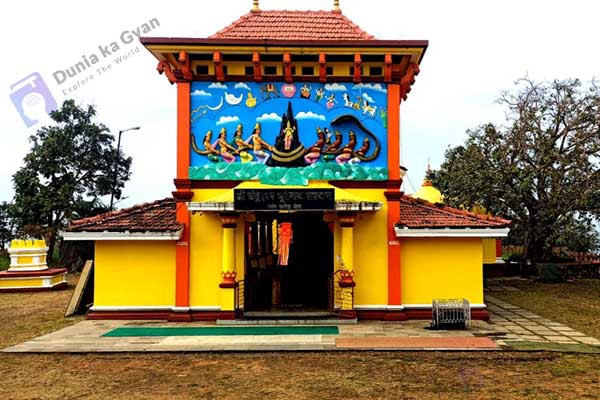 Lord Shiva is also known as Lord of the Moon, Chandranath, or Chandreshwar, therefore, the temple is a holy shrine of Lord Shiva. A visit to Bhootnath Temple of Chandreshwar is a pleasant way to start your day. One can also visit the cluster of temples in the Quepem taluka, south of Ponda along with this temple.

Ponda can be reached easily through a railway station or an airport. Panaji (Panjim), the capital of Goa, Margao’s main railway junction, and Dabolim’s international airport are all accessible by car from Ponda. The Kadamba Transport Corporation bus terminal on the outskirts of town is where regular bus services to Panaji (Panjim), Margao, and Vasco (near Dabolim) depart.

The same bus stop also serves buses to adjacent villages and towns, as well as interstate buses. The Kadamba Transport Corporation and the Karnataka State Road Transport Corporation regularly provide buses between Ponda and Dharwad, Hubballi, and Belagavi. Ponda is also well connected to Vasco through Verna via National Highway 566. The National Highway 4A binds Belgaum/Hubli and Panaji.

Ponda can also be reached through Panaji, Margo’s main degree crossing, and the international airport. The Kadamba Transport Corporation bus stop on the city’s outskirts is where regular bus services to Panaji, Margao, and Vasco (near Dabolim) circulate.

Unlike other parts of Goa, Ponda is not well versed in bike rental services. But public transportation is well established.

There are many places to stay in Ponda. Some of the most popular and comfortable hotels are:

If having a serene holiday amidst nature with complete spirituality and calmness is your goal, add Ponda to your list. The place serves perfect divine staycation to religious devotees, nature enthusiasts, and travel junkies.

Ponda hosts architectural treats amidst the lush green wildlife sanctuary. The rich diversity with the divine infusion of Goa adds another reason to the list of reasons for visiting Ponda.

Dress modestly, especially when visiting religious sites. The people are friendly and hospitable, but not everyone can speak English in these parts of goa. Unimpressed behavior off the goa coast may not be acceptable here.
Happy journey….!!!!