Renuka Lake – Thing to Do, Timing & How to Reach 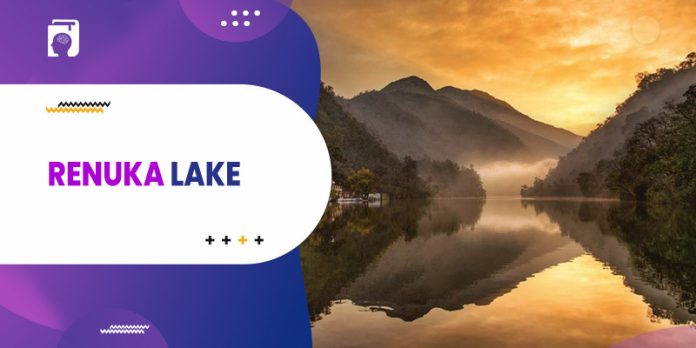 Renuka Lake, just 38 kilometers from Nahan, is the ideal spot for those who enjoy nature at its peaceful best. Unlike other lakes in the vicinity, Renuka Lake has a cultural past. It is situated at 672 feet above sea level in Himachal Pradesh’s Sirmaur District. The lake is the state’s biggest lake by area, with a circumference of 3214 meters. It is fashioned like a reclining lady and, thus, regarded as a manifestation of Goddess Renuka. When you reach the lake after navigating through the alpine forest, you are treated to some spectacular views.

As the legend goes, a monarch named Sahasrarjuna murdered Maharishi Jamadagni, Renuka Devi’s ascetic spouse. The holy woman is said to have leapt into the lake to avoid falling prey to the tyrannical king’s desire, yet she did not perish. When Parashurama, the indestructible son of Renuka and Jamdagni, learned about the entire incident through his mother Renuka, he slaughtered the entire Kshatriya race, including Sahasrarjun.

Renuka Lake is best visited from April to June and September to November. A fair is conducted on the lake’s shore just after Diwali. Devotees travel from all across the country to experience the divine union of mother and son at the lake.

The renowned Renuka temple, which was erected in the 1700s, is located next to the lake. The lake is located in a long valley encircled by dense woodlands and slopes covered with a diversity of plants. This is the ideal year-round location that entices visitors time and again.

Things To Do at Renuka Lake 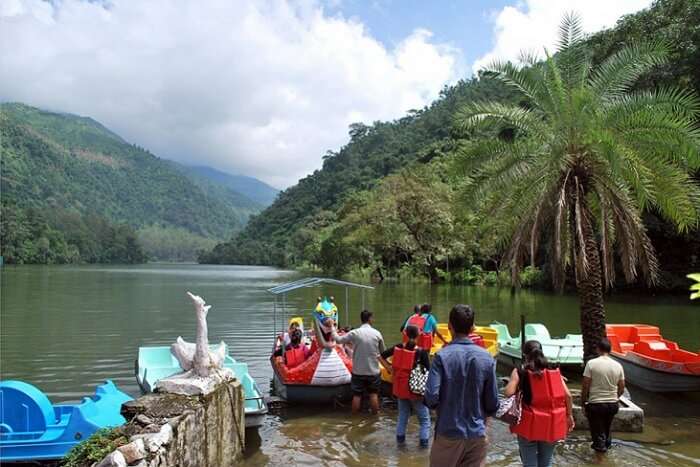 Renuka Lake is a great spot for unwinding and simply soaking in nature’s splendor and abundance. While visiting it, you may select from a variety of activities for a memorable trip.

Even after all these years, the longevity of Goddess Renuka is celebrated with tremendous passion and devotion at Renuka Lake. A fair is conducted on the shore of this lake after the Diwali celebration in October or November. Saints from all over the country pay a visit to Renuka Lake, especially during this fair, to witness the holy union of the mother and son.

When visiting Renuka Lake, you have a few hotels to select from. A good bet could be the HPTDC Hotel, which, despite its poor condition, provides stunning panoramic views of the surrounding area. Writer’s Hill Resort, which is 8 kilometers from Renuka Lake, as well as Ekant Guest House and Stella Inn Devices, are other options to consider. The PWD Guest House and the Gurudwara Dharamshala Asthan are cheaper options nearby.

Why It Is a Must-Visit Place

Renuka Devi drowned herself in the lake named after her. It’s now a tourist attraction where people enjoy boating. However, to preserve the lake’s sanctity, no one is permitted to go boating on it while wearing shoes. It fosters a variety of fish who anxiously await guests’ meals.

The region is densely forested, and travelers may participate in trekking, fishing, lion safaris, paddleboat, and other excursions. For 30 – 40 minutes, the boat trips cost INR 250 – 300. In addition, visitors may grab a bite to eat near the lake at a food booth that sells samosas and jalebis.

There’s a serene temple devoted to Renuka Devi and another to the guru Parashurama on the lake’s edge. The tiny zoo by the lake is ideal for adventurers and animal enthusiasts. Leopards, spotted deer, barking deer, Asiatic lions, lion-tailed macaques, and other wild animals live at this zoo. In total, it takes around 60 -90 minutes to explore the zoo.

A day trip to Renuka Lake and temple would suffice, but if you want to go deeper into the region, try visiting Sangrah, a hamlet 26 kilometers from Renuka Lake. Sangrah, which is 2200 meters above sea level, features slate-tiled homes and friendly people. Surprisingly, a home in the hamlet is 700 years old and has housed 400 generations thus far!

The home, which is built of mud, cow dung, and an urad dal paste, has withstood several natural calamities. After touring the Lake and the temples, Haripurdhar, Chopal, and Churdhar are some of the other places that deserve your visit.

Undoubtedly, Renuka is the best lake in Himachal Pradesh. It is easily accessible by road from across major cities in the state and beyond. It is 315 kilometers from Delhi and is easily accessible by car. Transportation is readily available to and from the lake. Taxis and buses are readily accessible for trips to the lake. The majority of couples and friends drive or ride their bikes to Renuka Lake. A rented cab is an excellent alternative when traveling with family and children.

A nearby airport to Renuka Lake is Chandigarh International Airport. The airport gets direct and regular flights from all over the country, making it easy to locate flights at a lower cost and for a specified day. This airport is about 130 kilometers from Renuka lake, and any means of local transportation, such as any cab or bus, can drop you in about three and a half hours.

Road excursions are the greatest way to make the most of a trip. If you have your vehicle, you may go on less-traveled routes and stop at wayside dhabas, villages and farms. For example, you can go to Himachal Pradesh via interstate bus or by vehicle or motorcycle. In both situations, you must travel roughly 300, 1,700, and 2,400 kilometers from Delhi, Kolkata, Bengaluru, and Mumbai.

Overall, Renuka Lake is an ideal vacation spot that is open all year and attracts nature lovers and religious pilgrims from all over the country. You may also visit various temples while visiting Renuka Lake, which attracts mostly devout Hindus, giving them yet another incentive to visit the calm and lovely lake.

The lake appears to be a lady lying on her side from afar. The lake, which has a diameter of 3,200 meters with a depth ranging from 1 to 13 meters, is home to at least 443 species of wildlife. In November 2005, India’s Ministry of Environment and Forests designated it as a National Wetland.