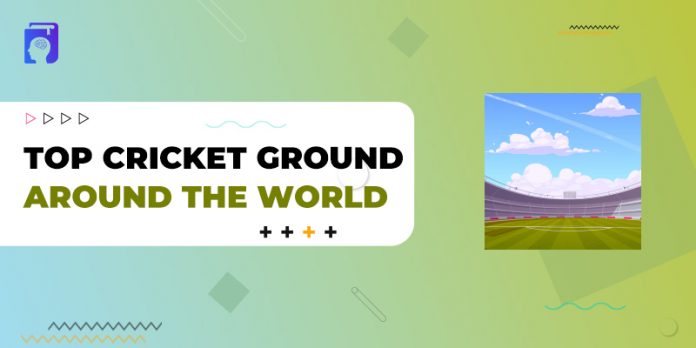 Cricket is a thrill to watch and play, and no one can ever deny the popularity of cricket in Asia, Australia, and some parts of Africa. For the cricket fanatic or cricketer, the grounds stand as a silent witness to the world’s ethereal deeds.

Top 10 Cricket Ground Around The World

Better known as Sardar Patel stadium, the stadium was constructed in 1983 and was renovated in 2006 after it gets demolished and completely rebuilt in February 2020 and now officially known as the largest cricket ground in the world. Spread across 64 acres and hosted the iconic event NAMASTE TRUMP. The seating capacity of 110,000 spectators dispenses a flawless 360 view to the viewers. The stadium project is the brainchild of prime minister Narendra Modi who lines that this investment will serve as the future of Indian cricket.

Lords is perhaps the greatest and most esteemed cricket ground, referred to as the HOME OF CRICKET. It was built in 1814 and named after Thomas Lord, the Marylebone cricket club (it controls all the cricket rules). It is home to the world’s oldest sporting museum. Lords is not just a ground moreover;, it is an emotion for cricket -chauvinist. It was set-up in 1864 in Kolkata and is home turf to IPL team Kolkata knight riders. In terms of capacity, Eden gardens are considered the second-largest stadium in the world. It also doubles up as a quaint destination for nature lovers when it is not hosting some of the most nail-biting sports events. The Eden complexes sprawl the lush greens over 50 acres. Melbourne cricket ground is always on top when you talk about cricket arenas. Built-in 1853 with a spectator capacity of 1,00,024. MCG hosted various sporting spectacles in the last 100 years, including world cups, summer Olympics, and commonwealth games. The scoreboard of MCG was built in 1882 and is currently the best and the largest scoreboard in Australia, which is 25.2m wide and 13.17 meters high. Situated at 4780 feet above sea level, it is the home turf of kings xi Punjab. Counted as one of the oldest cricket grounds in India. alighted on the top of Kangra valley and beholds the spectators with the picturesque setting. Another impressive feature is its openness, which helps fast bowlers sweep their bowls in the air. Located in the heart of  ‘THE HARBOUR CITY’ Sydney, the SCG or Sydney cricket ground has a seating capacity of 48,000 spectators. It is one of Australia’s most iconic venues as it was opened in 1988 and has been in use ever since. It is the home stadium of BIG BAS LEAGUES (BBL) Sydney sixers. Established in 2004, it operated from the pavilion end and north end. The ground has a capacity of 55,000 and extends across 16 acres of land. Formerly named after its contractors, it was later changed from the old one to the present one, dedicatory to prime minister Rajiv Gandhi. Located in the northern Adelaide of Australia, also denoted as the heart of South Australia. The stadium nestled across the backdrop of a magnificent garden and swaying trees gives you a feeling of nostalgia. The Adelaide oval is reckoned to be the best batting wicket in Australia. From 2013, Adelaide became host to the drop-in pitches.

Located in Melbourne, also renowned by the name of marvel stadium. It has a capacity of hosting 48,003 fans. In the past, the docklands stadium has been used for rugby and football tournaments. Considered as one of the expensive stadium completed at the expenditure of 460 million.

The ground is known for having a fast and bouncy pitch and popular for pace bowlers, the most expensive ground in the world. Managed by Western Australia cricket association. The ground has also been used for other sports, including athletics carnival. Established in 1890 with a seating capacity of 60,000 people. Cricket is one of the most popular sports in the world. The ground has a significant influence on team selection and considerably influences success along with failure. As with most spectator sport, the venue is a fundamental factor in the experience. Check out our page for more relatable articles.