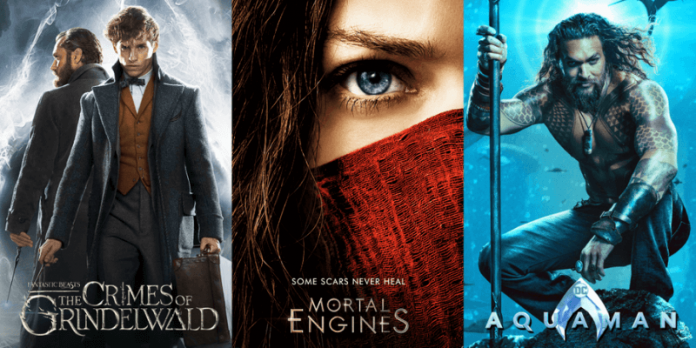 In this era of movies there are several movies with so many kinds of genres. One of the most liked genres is fantasy. These types of movies take the imagination to the next level. Whatever we can imagine from magic to creating a different world, fantasy movies have done it all. It made us think about a parallel world which we couldn’t even imagine some time back. Due to the creative minds of producers, directors and writers many films hit the box office and even won the oscar.

So, let’s look into some really good fantasy movies.

1. The Lord of the Rings: The Return of the king

This movie from the series of “The lord of the Rings” was released in 2003. This movie got the imdb rating of 8.9. The movie starred Elijah Wood, Viggo Mortensen, Ian McKellen and many more. This movie is the conclusion part of the series. This movie represents the fight between good and evil, who are fighting fir the future of middle-earth. The former members were preparing for the final battle while Hobbits and Sam were preparing to get the ring. In the chase they followed Gollum totally unaware of the path they were heading to.

This series of Star Wars was released in 1980 and got the imdb ratings of 8.7. The main cast of the movie is Mark Hamill, Carrie Fisher, Harrison Ford. in This sequel Luke, Han, Leia and Chewbacca were attacked by some strong forces. Han and Leia escaped in Millenium Falcon while Luke went to search for Yoda and travelled to Dagobagh. Luke was forced by the dark side to get into the duel with Darth Vader which he can win only with the help of Jedi Master.

The movie was released in 1999. The imdb ratings is 8.6. The cast of the movie is Michael Clarke Duncan, Tom Hanks, Sam Rockwell etc. Paul, a head guard of the prison, meets a prisoner named Coffey in there. He was accused of murdering two girls. He was very powerful and had strength to kill anyone. He was a naive guy and had a fear of the dark. Apart from this Coffey was gifted with a supernatural power. After knowing about it, Paul began to doubt whether he had actually killed the girls or not.

It is a 2017 released movie with the ratings of 8.4. The movie starred Anthony Gonzelez, Gael Garcia Bernal, Benjamin Bratt etc. In the movie Miguel, a young boy wanted to become a singer but his family was adamant not let him sing. But he also wanted to be like his idol. He was continuously trying to prove his talent and on his path he entered the beautiful world of the dead where he met Hector, a fascinating prankster. Together they both tried to find out about Miguel’s family’s past and their reason for not letting him sing.

The movie released in 1995. It has 8.3 ratings. The movie has animated characters named Sheriff Woody, Jessie, Sid, Forky etc. Andy, a young boy has a cowboy doll named Woody as his favourite toy until his parents buy him a toy named Buzz. Buzz thinks he was a real spaceman and was on a mission to return to his home planet and was very arrogant. When Andy and his family shifted to a new house they somehow got separated from him and were stuck in clutches of a very unadjusted neighbor Sam. Woody and Buzz now need to escape from Sam and get back to Andy.

This is a 2006 movie with imdb ratings of 8.2. This movie starred Ivana Bacquero, Doug Jones etc. Captain Vidal, a brutal sadist, has a new wife with her daughter, Ofelia from previous husband. Ofelia slowly observed how brutal her stepfather is. One day she was taken to Pan’s Labyrinth by a fairy, who told her that she is a princess. She was required to successfully perform three tasks so as to prove her royalty.

It is a 2020 movie. It has an imdb rating of 8.1. The cast of the movie is Daveed Diggs, Jamie Foxx, Tina Fey and more. This is the story of Joey who wants to make his career in jazz despite his mother not agreeing to it. Joey then decided to open a band and decided to go for an audition. Impressed by him, Dorothea gave him a chance to work with him. When heading to the show, Joey falls in the manhole. This story tells about his story of after life and his change of soul when he returned to his body.

8. How to train your Dragon

It is a 2010 film with 8.1 ratings. Characters of this movie are Hiccup HorrendousHaddock, Astrid Hofferson etc. Hiccup is a very notorious boy. He lives at a place where fighting with dragons is considered as a part of life. But he has a different point of view and has a sense of humour which makes him different from others. His father was the head of the clan. He was forcibly sent to a dragon-fighting school where he befriends an injured dragon. He named him toothless. Hiccup together with his friend decided to change the course for the new future of his people.

It is a 2001 film with 8.1 ratings. Sullivan, a blue furred big purple monster and his one eyed friend and roommate Mike were the monsters of the large monster company named Monsters Inc. . One day a human girl entered their world where no human had ever entered which disturbed their life so much.

It is of year 1987 with imdb rating 8. The movie starred Cary Elwes, Robin Wright, Billy crystal etc. It is a fairy tale movie of a beautiful and young girl and her lover. He needs to find her and save her after a long separation. He needs to fight with the evils of the Floral kingdom so that they get reunited. This movie is based on the novel with the same name “The Princess Bride” which received so much love from the audience.

So, here is the list of the best Top 10 Fantasy movies which are worth watching. Enjoy watching!!