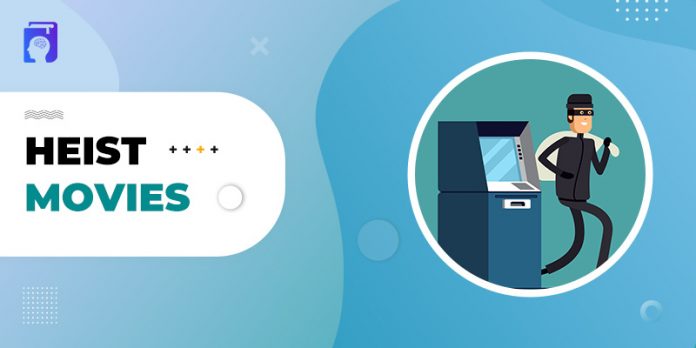 Okay! So what is a heist movie? So, the theme of heist movies usually revolve around heists or a series of heists. The heist has to play weightiest role in these movies. Whenever we talk about heists, it is about robbery and whenever a father and son relation, or any other relation, it can’t be called a pure heist movie.

However, many heist movies are about failed heists. But, the story of failed heists is a certified one if ‘the heist’ is the main part of the story. There are many multi starrer movies in which they work as a team and then plan to divide the money among them. Because executing a big robbery isn’t an easy task for a single person. So, many people usually are involved in a heist.

The imdb rating for this movie is 8.8. This film features Leonardo Dicaprio,

In this movie, Dom Cobb (Leonardo DiCaprio) has the special ability that he can enter anyone’s mind and can steal their ideas from their subconscious. His ability is the best thing one can have in industrial espionage. But, this cost him everything he loved. But, one day he got a chance to redeem, when he got an impossible task.It was to plant an idea in the mind. If he got success, it would be a perfect crime, but on his way he repeatedly got anticipated by a dangerous enemy.

imdb rating for this film is 8.5. The main cast is Kevin Spacey,

During a massacre, many people were killed and those who were left were taken for police line-up. There they were found innocent. Five people who met during the lineup then decided to pull off a dangerous heist which involves precious emeralds worth 3 million dollars on the words of Keyser Soze, an enigmous criminal. This heist then ended up with an explosion in a harbour, leaving few survivors.

Imdb rating for this film is 8.3. The cast involves Quentin Tarantino,

Six criminals, who were unaware of each other’s identities, were hired to carry out a heist. The robbery was surprisingly attacked by police and the gang was forced to shoot out their way. At their warehouse, they all gathered only to realise that they were actually set up, and there was a traitor among them who they wanted to find.

Imdb rating for the movie is 8.3. The movie starred Robert Redfort, Paul

After the murder of a common friend, Johnny Hooker and Henry Gondorff decided to take a revenge on that ruthless mastermind responsible for this, Doyle Lonnegan.Hooker and Gondorff made a plan and crafty Lonnegan didn’t even knew that he was being tricked. As their big fraud came into light, things don’t go as per planned, requiring some last minute changes by a fearless duo.

After spending five years in jail, jewel thief Tony turns down the job offered by his friend, until he finds out that his old girlfriend has become the girlfriend of some local gangster Pierre Grutter when he was not there. At the time of the minor smash and grab into a full scale jewel heist, Tony and his friends were able to get away clean. But after the robbery got completed, their actions threatened everyone involved.

imdb rating is 8.2. The cast of the film is Robert DeNiro, Al Pacino.

A big criminal McCauley is trying to control the bad actions of one of his men while planning for his last big heist before his retirement. Meanwhile, Lieutenant Hanna wants to track McCauley while fighting with his own problems, including his unfaithful wife and mental health of his stepdaughter. During the process of opposing each other, they both started to gain mutual respect.

Criminal Johnny Clay recruits a sharpshooter, a crooked police officer, a bartender, a betting teller named George, for one last job before he goes and marries his fiancee, Fay. But when George told her wife about the heist they are going to carry out at the place he works, his wife then hatches a plan of his own.

When an inexperienced criminal Sonny Wortzik planned a bank robbery, things didn’t go as per plan and the hostage situation was created. As Sonny and his mate, Sal Naturile desperately tried to remain in control, the media and FBI gathered resulting in creating more tension. Successively, Sonny’s motivation behind the robbery came into light and his standoff with law leads to an inevitable end.

The mastermind behind a bank robbery in Manhattan planned a big heist. A detective tries to match wits with him and try to negotiate with him. But the situation worsens when a broker enters with some hidden motives.

Dapper Danny Ocean is a man of action. Only less than 24 hour for his parole a straight and charismatic thief is all ready to set his new plan. He gathered eleven people and executed his plan to steal money from the three big and popular casinos in Las Vegas which was owned by his enemy, Terry Benedict.

So, here are some of the best heist movies which are iconic and must watch. Although all the heist movies don’t have perfect, happy and successful ending but are all very interesting to watch. I hope this series of best movies will help you decide which movie to watch in your free time.