Hill stations are always a great attraction for people. During vacation, especially the Summer holidays, people prefer hill stations. There are many hill stations in the country. Some of them are – Manali, Shimla and chail etc.

Here are some of the best hill stations in Himachal Pradesh 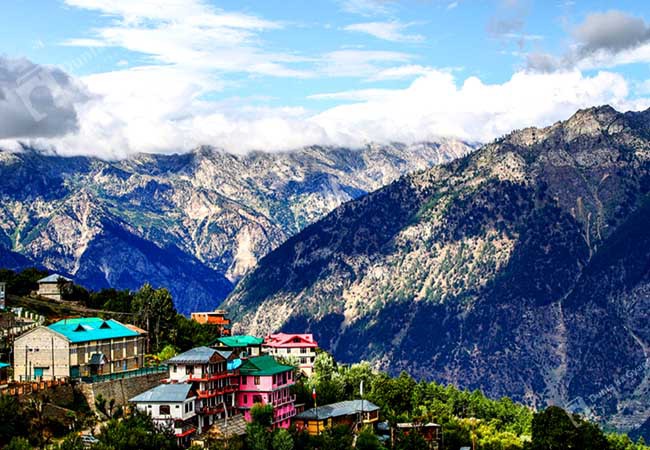 Manali is a resort and tourist town nestled in the mountains of the Indian state of Himachal Pradesh near the Kullu Valley’s northern end in the Beas River Valley. It is located in the Kullu district, about 270 km (168 mi) north of the state capital, Shimla, 309 km (192 miles) northeast of Chandigarh, and 544 km (338 miles) northeast of Delhi, the national capital. With a population of 8,096, the small town is the beginning of an ancient trade route to Ladakh and from there over the Karakoram Pass on to Yarkand and Khotan in the Tarim Basin. It is a popular tourist destination and serves as the gateway to Lahaul and Spiti district and Leh. Shimla is also known as Simla, are the capital and the largest city of the Indian state of Himachal Pradesh. In 1864, Shimla was declared as the summer capital of British India. After independence, the city became the capital of Punjab and was later made the Himachal Pradesh’s capital. It is the principal commercial, cultural and educational center of the state. It was the capital city in exile of British Burma (present-day Myanmar) from 1942 to 1945. Small hamlets were recorded before 1815 when British forces took control of the area. The climatic conditions attracted the British to establish the city in the dense forests of the Himalayas. As the summer capital, Shimla hosted many important political meetings, including the Simla Accord of 1914 and the Simla Conference of 1945. After independence, the state of Himachal Pradesh came into being in 1948 due to the integration of 28 princely states. Even after independence, the city remained an important political center, hosting the Simla Agreement of 1972. After the reorganization of the state of Himachal Pradesh, the existing Mahasu district was named Shimla. 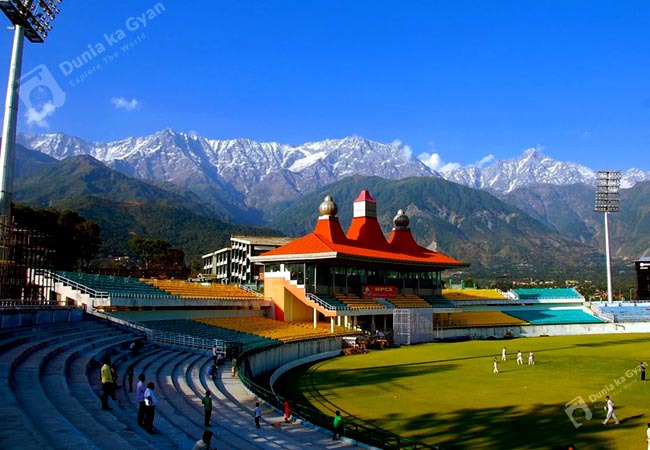 Chail is a hill station in Himachal Pradesh, India. It is 44 kilometers (27 mi) from Shimla and 45 kilometers (28 mi) from Solan. It is known for its salubrious beauty and virgin forests. The Chail Palace is well known for its architecture: the palace was built as a summer retreat by the Maharaja of Patiala during the British Raj, on the land allotted to him by the British for the former’s assistance in the Anglo-Nepalese War. The erstwhile royal family of Patiala owned the cricket ground and a polo ground at an altitude of 2,444 m. It is the world’s highest cricket ground. Hikers also frequent Chail as it offers wonderful views of the lower Himalayas. It has good trekking points from Junga, Kufri, and Ashwani Khad at Solan. Many Eco camps are held here. There are many camping sites for campers and hikers, so camping in Chail is the most sought-after activity for enthusiasts. 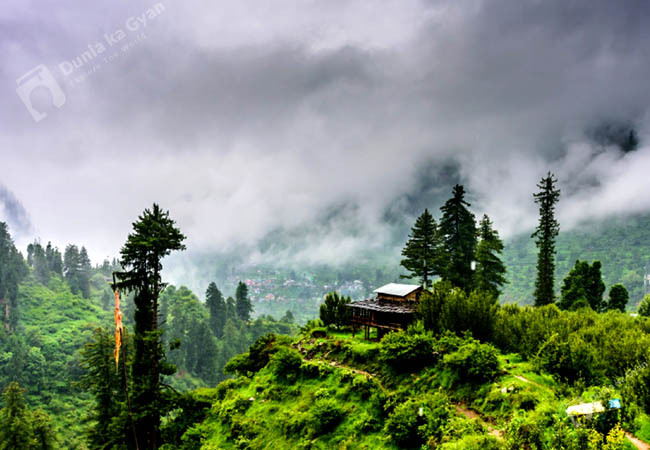 Kasauli is a cantonment and town located in Solan district in the Indian state of Himachal Pradesh. The British Raj established the cantonment in 1842 as a Colonial hill station,77 km from Shimla, 65 km from Chandigarh, and 94 km from Ambala Cantt (Haryana), an important railway junction of North India.

McLeod Ganj (also spelt McLeodGanj or McLeodganj)is a suburb of Dharamshala in the Kangra district of Himachal Pradesh, India. It is known as “Little Lhasa” or “Dhasa” (a short form of Dharamshala used mainly by Tibetans) because of its large population of Tibetans. The Tibetan government-in-exile is headquartered in McLeod Ganj. 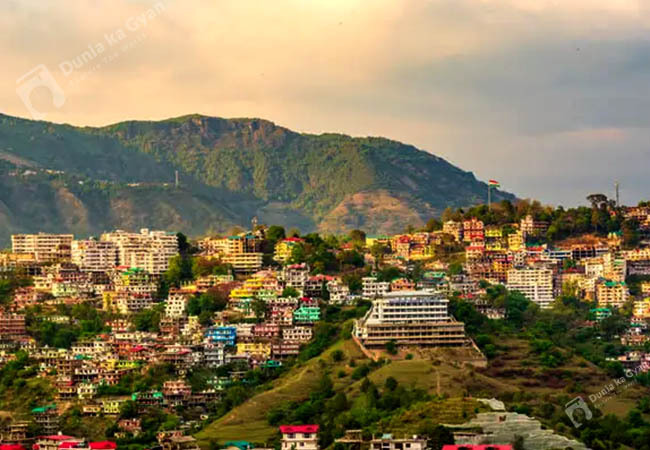 Solan is a town in the Indian state of Himachal Pradesh and the district headquarters of Solan district. The largest municipal council of Himachal Pradesh is located 45.5 kilometers (28 mi) south of the state capital, Shimla, at an average elevation of 1,550 meters (5,090 ft). The place is named after the Hindu goddess Shoolini Devi. Every year in June, a fair venerating the goddess is held, featuring a 3-day mela at the central Thodo ground. Solan was the capital of the erstwhile princely state, Baghat. Solan is also called the “City of Red Gold” due to tomatoes’ bulk production in the area. The city is situated between Chandigarh (joint capital of Punjab and Harayana) and Shimla (state capital) on the Kalka-Shimla National Highway-22. The narrow-gauge Kalka-Shimla railway passes through Solan. Located on the Punjab-Himachal Border, Solan is nestled in the Shivalik hills of the Himalayas. Kufri is a resort hill station in the district of Shimla, India. It is located 20 km from the state capital Shimla on National Highway No. 22. On Kufri Avenue, the main thoroughfare, boutiques, and restaurants mix with Indian-style hotels and souvenir shops to look for during a visit. The name Kufri is derived from the word kufr, meaning “lake” in the local language. The highest point in the surrounding region, Kufri has a Himalayan wildlife zoo that hosts rare antelopes, felines, and birds, including the Himalayan monal, the state bird of Himachal Pradesh until 2007. During winter, a meandering path through the potato plantations turns into a popular ski track. 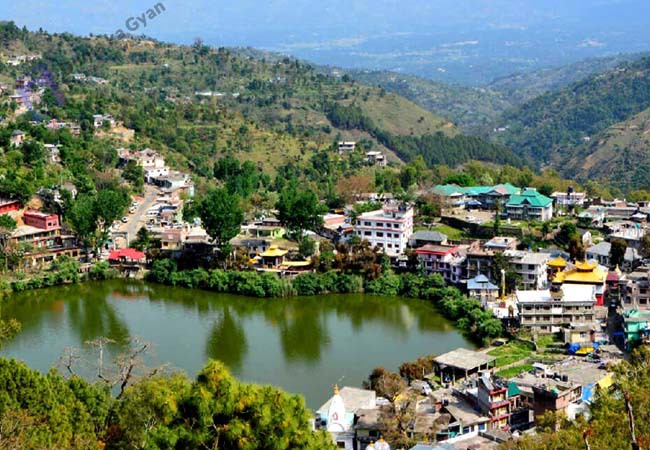 It is situated 145 kilometers (90 mi) north of the state capital, Shimla, in the north-west Himalayas, at an average altitude of 800 meters and experiences pleasant summers and cold winters. Mandi is connected to the Pathankot through National Highway 20, which is almost 220 km(140 mi) long, and to Manali and Chandigarh through National Highway 21, 323 km(201 mi) long. Mandi is approximately 184.6 km (114.7 mi) from Chandigarh, the nearest major city, and 440.9 km (273.9 mi) from New Delhi, the national capital. In the 2011 Indian census, Mandi city had a population of 26,422. Mandi district is currently the 2nd largest economy in the state, next to Kangra. In the state, Mandi has the second-highest sex ratio of 1013 females per thousand males. 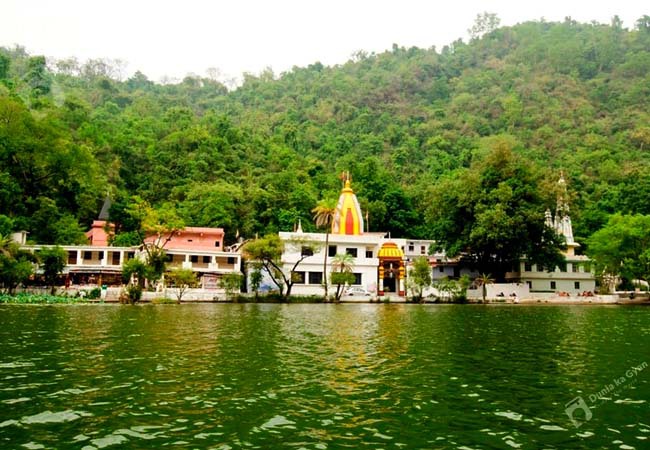 Nahan is a town in Himachal Pradesh in India and is the headquarters of the Sirmaur District. It was the capital of the former Sirmur princely state. Nahan is a trade center for agricultural produce and timber. The town’s industries include hand weaving, wood carving, and ironworking. It was the Punjab Hill State of Sirmur (Sirmaur) capital during British rule in India.

These are just some of the hill stations of Himachal Pradesh you can visit for a vacation. There are many other beautiful and less-explored places, that this lovely state offers travelers. The hill stations and cities here are easily accessible by a well-connected network of roads, train lines, and air, making these places very popular amongst tourists. Himachal Pradesh is known for its warm and friendly hill folk. The luscious fruit orchards, majestic mountains, and lovely hospitality make these places a must-visit for all. Other popular places in Himachal Pradesh that travelers should consider are Manali, Kasauli, Solan, Chail, Sirmaur, Kufri, and many more. Many of these places remain untouched by commercialization and technology and have maintained their natural beauty.