Top 10 Places to Visit in Barmer 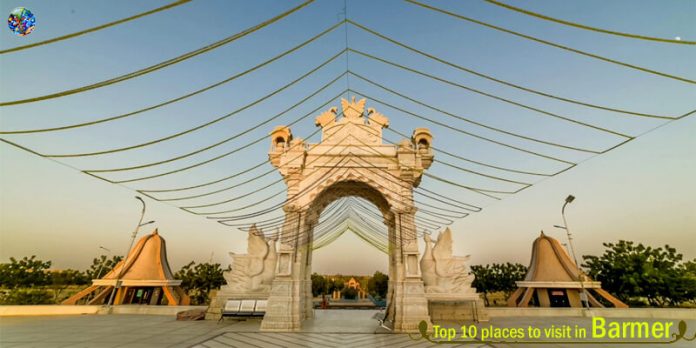 Barmer is one of Rajasthan’s larger districts, covering 28,387 square kilometers. It contains a portion of the Thar Desert since it is located in the western part of the state. This district is bordered on the north by Jaisalmer and on the south by Jalore. Its eastern border is formed by Pali and Jodhpur, while its western border is shared with Pakistan. This district, which is partially desert, has a wide range of temperatures. Summer temperatures can reach 51 degrees Celsius, while winter temperatures drop to 0 degrees Celsius. Luni is the district’s longest river. It passes through Jalore and merges into the marshy land of Runn of Kutch after traveling nearly 500 kilometers.

Top 10 places to visit in Barmer 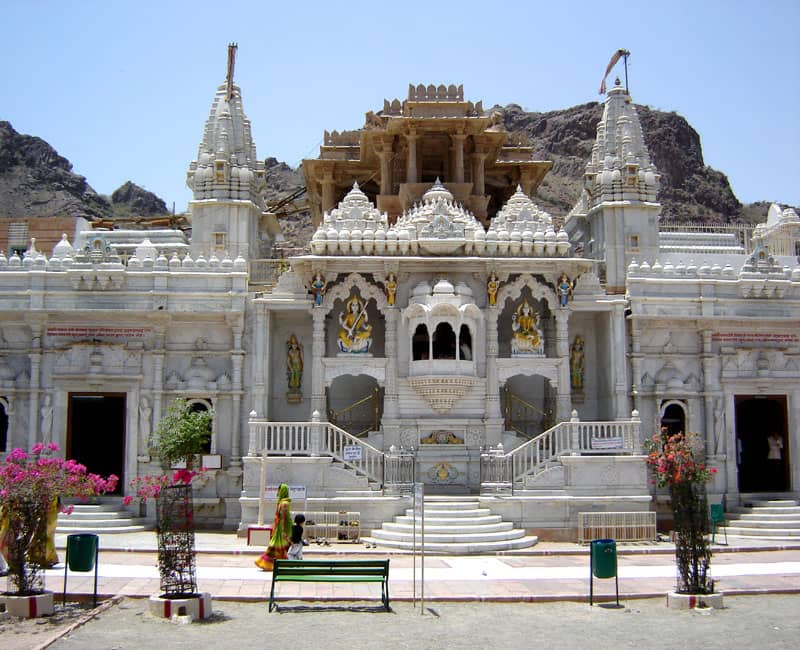 Shree Nakoda Ji, also known as the Parshwanath Temple of Nakoda, is a major Jains’ pilgrimage site. This Jain temple is located on a beautiful 1500-foot hill about 13 kilometers from Balotara Railway station and 1 kilometer from Mewad district. There are many statues in this temple, but the black stone statue of Parshvanth, a Jain saint (Tirthankara), is the main attraction. Aside from that, there’s the Shantinath temple, which has high leading stairs. Thousands of pilgrims and visitors visit each year to pay their respects to the magnificent architecture. Pundarik Swami’s temple was built in the 16th century, and the Charbhuja and Shiva temples were built later.

How to reach: The closest railway station to Parshwanath Temple is Balotara Railway Station. Jodhpur, 110 kilometers away, is the closest airport. By path, Nakoda and Jodhpur are easily accessible. To get to their destination, tourists can use private transportation such as an auto-rickshaw, taxi, or private cab. Nakoda Ji is a character in the manga Nakoda Ji The temple is open to tourists from dawn to dusk. 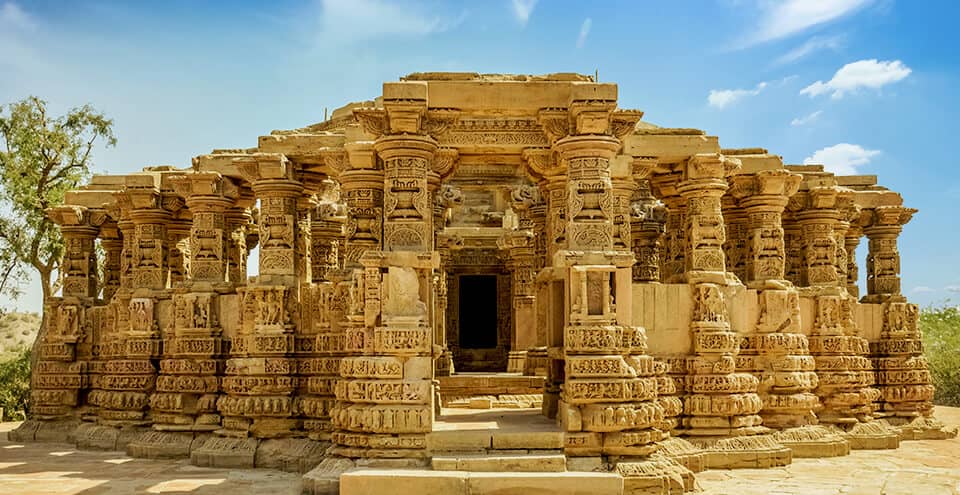 Barmer, with its kiradu temples, is a wonderful place to spend time with your loved ones. Take in the sights at this well-known tourist destination. Get drenched in the spirit of adventure that you get to experience at kiradu temples, Barmer, with so much to tempt your senses and give you recreation at its finest. Take in all of the famous points of interest as a group and relive a few fun moments. Barmer, with its kiradu temples, is not only a great place to go sightseeing, but it also allows you to indulge in a little self-indulgence. So, check out the kiradu temples tourist attraction for all of the attractions it has to offer and come here on weekends for a rejuvenating period. The best way to spend quality time with your children and family is to visit the Kiradu temples in Barmer.

How to reach: The Kiradu Temples, located 35 kilometers from Barmer, highlight a side of Rajasthan that is less well-known. There are five temples in total, all of which have a direct link to the Solanki architectural style. The vast temple buildings are so intricately crafted that just looking at them is enough to make you gasp. 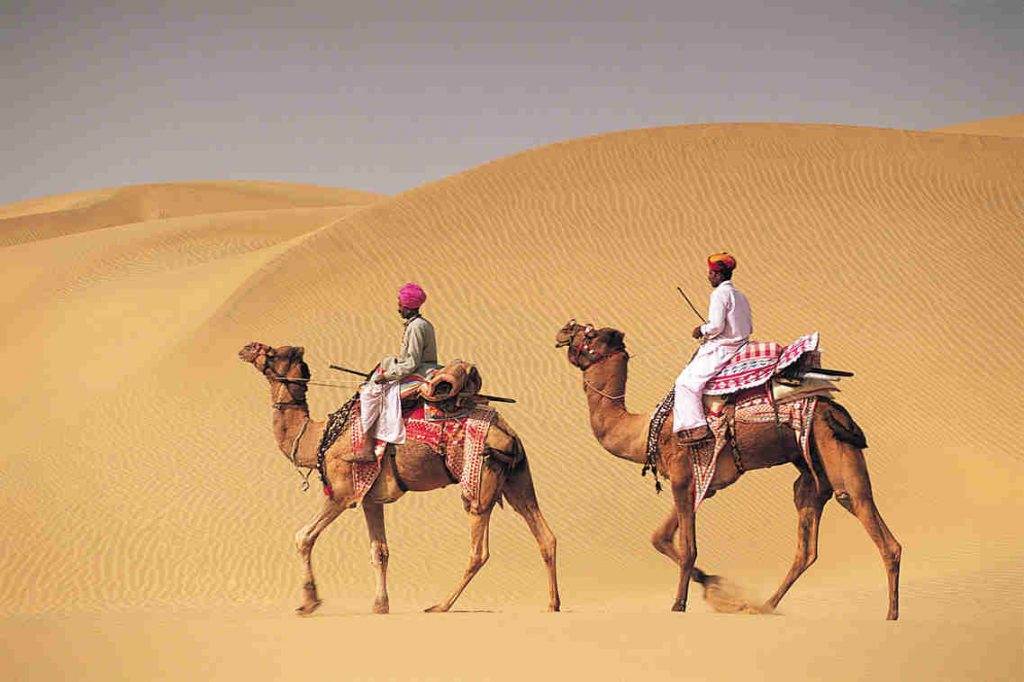 Barmer is 5 kilometers away from the magnificent Mahabar Sand Dunes. The majesty of the dry sand awakens the child inside each of us. Desert adventures such as desert safaris and camel rides, as well as a variety of other activities, are available. Winds sculpt the desert, and the dunes move and change their positions and designs in response to the wind, giving the beholder the most majestic and picturesque sight. Despite the fact that the desert is a barren landscape, nature’s beauty is shown from a different perspective. Mahabar Sand Dunes in Barmer have a breathtaking elegance. Desert safaris and camel rides are common in the Mahabar sand dunes of Barmer. In these sand dunes, a desert safari is worthwhile.

Best time to visit: At the starting of the summer season i.e March, April 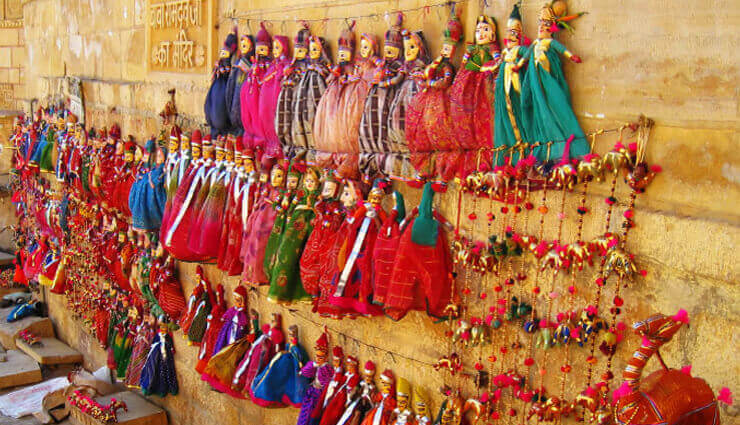 The local Barmer market is well-known for the high quality of its goods and services. Several hundred shops and hawkers line the streets of Barmer, selling intriguing, aesthetically appealing, and decorative pieces that you will find difficult to resist. Woodcarvings, pottery, carpets, intricate embroidery, block printed fabrics, and multi-hued traditional costumes with mirror work are all available in abundance in Barmer. Rajasthan’s ethnic wear includes embroidered fabric and pouches, rugs, blankets, shawls, and carpets, among other things.

Best time to visit: During the summer season 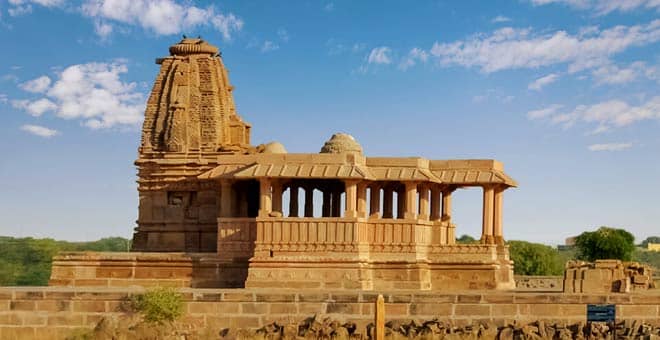 In the 12th or 13th century, this temple was founded. The temple is known for its incredible architecture and is situated in Devka, a small hamlet about 62 kilometres from Barmer along the Barmer-Jaisalmer Road. Two other temples with stone sculptures of Lord Ganesh can also be found in the village.

How to reach: While traveling from Barmer to Jaisalmer on NH-15, it is located just before you reach Sheo. Only those interested in history or who worship the lord of light, the Sun, will be drawn to the place. 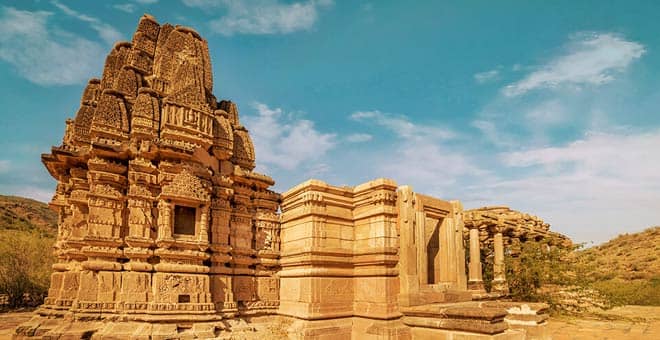 Chintamani Parasnath Jain Temple, also known as ‘Shri Godisa Parshwanath Bhagwan ka Mandir,’ is a well-known Jain temple. This temple honors Parasvanath, a Jain Tirthankara. This Parasnath temple was built in the 12th century on a hilltop west of Barmer city. The interiors of the Parshwanath Jain temple are known for their beautiful sculptures and ornamental paintings. The rich glasswork of the artisans in the temple’s interior is also a must-see for visitors.

How to reach: The Chintamani Parasnath Jain Temple is on the outskirts of Barmer, near the end of Sadar Rd. By taxi or local bus, it is simple to get here. 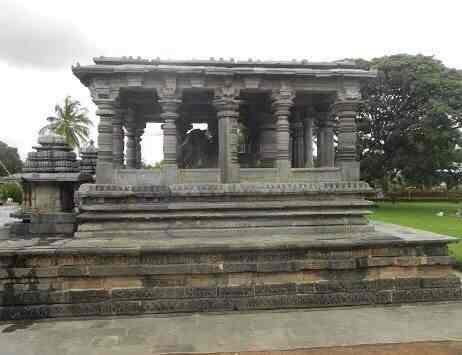 Another of Barmer’s gardens is the Safed Akhara or Sideshwara Mahadev temple complex. This garden’s unique feature is that it allows you to enter temporary housing while also allowing you to prepare your own meals; your dish, your way! The location is tranquil, and it may have the potential to provide you with natural delicacies, making it a relaxing break from your hectic schedule if you so desire. The fact that it is near to Barmer is the best part of this garden. It isn’t a waste of time to take this detour. If you’re just in Barmer for a few days, this isn’t a must-see. Lord Shiva, Radhe Krishna, Lord Hanuman, and other gods and goddesses have shrines in the Temple. The temple grounds are extensive, and there is a peacock garden on the premises. These temples can be visited if you are visiting Barmer primarily for sightseeing.

How to reach: Safed Akhara is about 4–5 kilometers from Barmer, on the way to the Mahabir Sand Dunes. You should stop by the temple before heading to the Mahabar Sand Dunes. 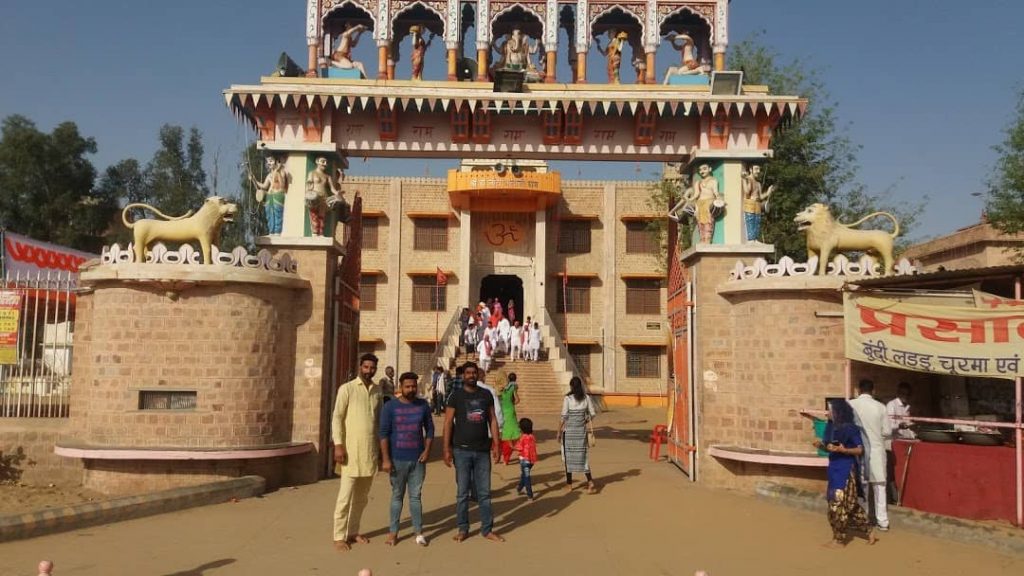 The area of Barmer is known for its historical monuments and temples. A number of such temples can be found in Barmer, which draw visitors from all over the world. The temple of Goddess Jagdambe is a major attraction in the city. It is a 500-year-old temple, according to archaeologists. The Jagdambe Mata temple is about 140 meters above the plains. The old ‘Chintamani Parshvanath Jain’ temple, one of the area’s oldest Jain temples, is also worth a visit. It was constructed in the 16th century by Shri Nemaji Jivaji Bohra. 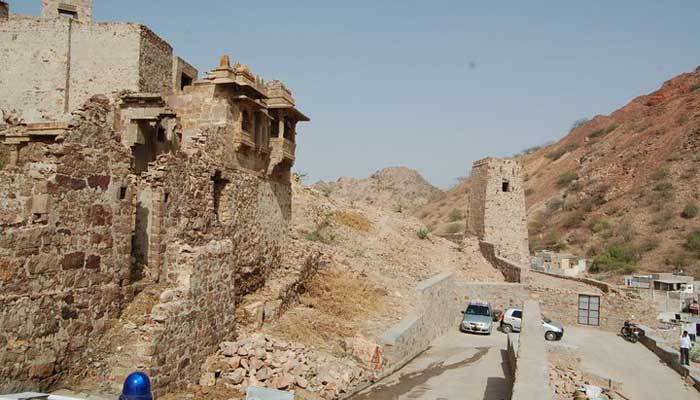 One of the most well-known tourist attractions in Barmer is the Barmer Fort. When Rawat Bhima moved his capital from Juna to Barmer in 1552 AD, he constructed the Fort on a hillock in the current district. He constructs Barmer Garh, a fort on the outskirts of the city. The fort is constructed on the top of a hill at a height of around 1383 feet, but Rawat Bhima constructs a fort at a height of 676 feet, which is a safer location than the top. The Fort’s main entrance is on the north side, while the Safety Burg is on the east and west sides. Because of the hill’s natural wall defense, the fort’s boundary wall was ordinary. The fort is surrounded by a large number of temples. 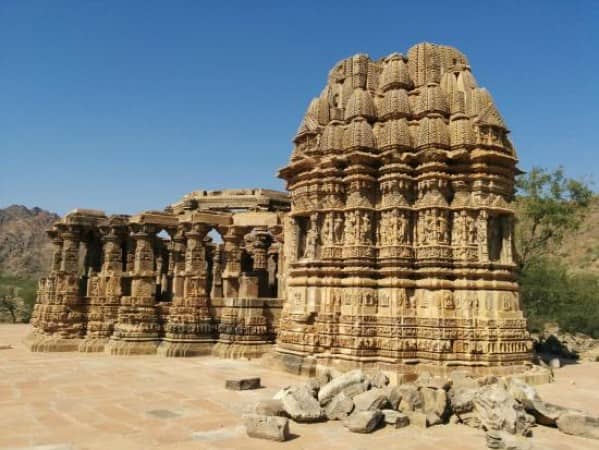 The Vishnu temple is one of Barmer’s main attractions, and it exudes a distinct aura. It’s in Khed. The temple is crumbling, but the architecture is a triumph for the region, and many visitors come up here just to see it. While this temple might be low on your priority list, if you have the opportunity, make a point of visiting it. The RCM and Palika markets, as well as the Veerchand Jangid market, are all nearby, and Barmer is known for its shopping, so the ladies have another excuse to come.

How to reach: Vishnu temple is located in Barmer Village, Barmer, and this page displays the distance to the nearest railway stations and airports. The ixigo Trip Planner tells you how to get to the Vishnu temple on a map of Barmer. It’s easier to ask locals how to get to the hotels or attractions mentioned on this page if you’re visiting a less popular location. However, the best option is to print the map on this page and keep it with you so you can find Vishnu Temple.

Barmer is Rajasthan’s most important and second-largest district. It is located in Rajasthan’s western region, close to the Pakistani border. King Bahad Rao founded this city in ancient times, and it was given the name Barmer after him. Following that, it was known as Mallinath, which may be the name of a Rajput deity. Barmer is bordered on one side by a well-known Rajasthani river. This area’s residents are plain, innocent, and helpful. They’re dressed in Rajasthani garb. This place is well-known for its sweets, Rajasthani shoots, and printing. As a result, this location is lovely.