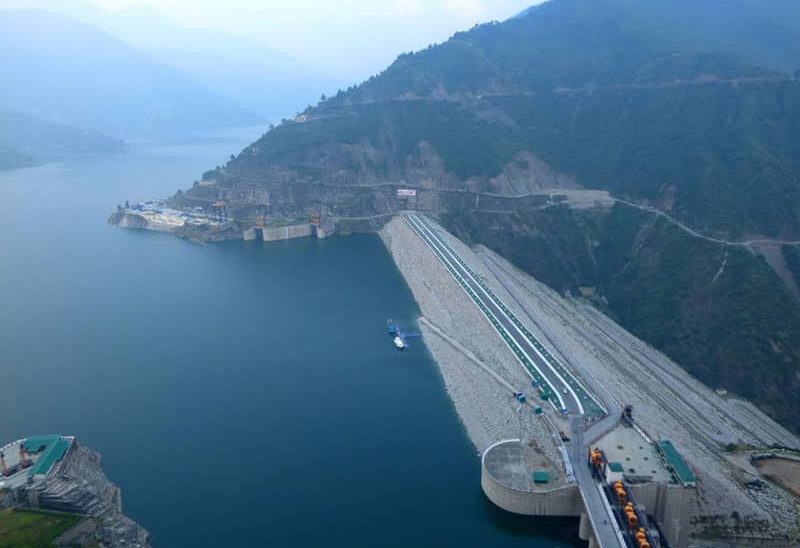 The Tehri Dam is the tallest in India. It is a multi-purpose rock and earth-fill embankment dam on the Bhagirathi River near Tehri in Uttarakhand, India. It is the primary dam of the THDC India Ltd. and the Tehri hydroelectric complex. Phase 1 was completed in 2006. The Tehri Dam withholds a reservoir for irrigation, municipal water supply, and the generation of 1,000 megawatts (1,300,000 hp) of hydroelectricity. The dam’s 1,000 MW variable-speed pumped-storage scheme is currently under construction with expected commissioning in May 2018. 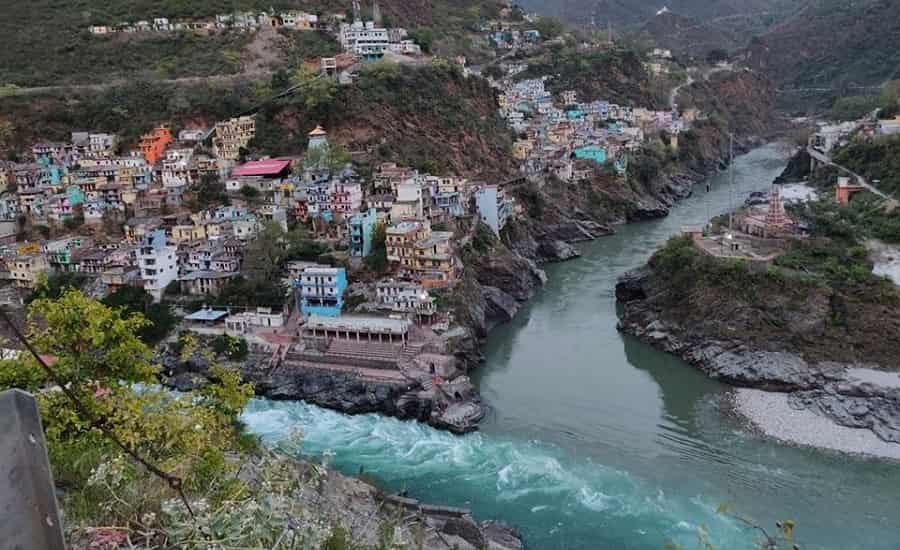 Devprayag (Deva prayāga) is a town and a Nagar panchayat (municipality) in Tehri Garhwal district in the state of Uttarakhand, India, and is one of the Panch Prayag (five confluences) of Alaknanda River where Alaknanda, Saraswati River (an underground river in Hinduism) and Bhagirathi rivers meet and take the name Ganga. Situated at the confluence of the Alaknanda and the Bhagirathi, the town of Devprayag lies at an altitude of 472 m. on the metalled road running from Rishikesh to Badrinath and about 87 km. from Narendra Nagar. The town is the headquarters of the tehsil of the same name and is one of the five sacred prayers (confluences) of the Alaknanda. Tradition has it that the town is named after Dev Sharma, a sage who led a penance life and succeeded in having a glimpse of God. 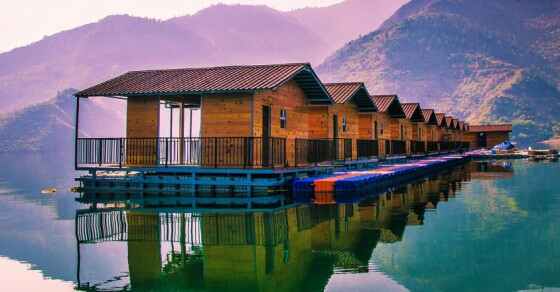 Kanatal is a small village and a hill station in the state of Uttarakhand, India. Kanatal is 78 km from Dehradun (capital of the State Uttarakhand), 38 km from Mussoorie, and 12 km from Chamba. It is on the Chamba-Mussoorie road and nearly 300 km from Delhi. A few decades ago, there was a small lake or taal (pond). When it dried up, people started calling it kaana taal. By that, the name of the nearby area is Kanatal. Indians usually use the word kaana for dry well or pond in the Hindi language. Surkanda Devi is a temple in Kaddukhal dedicated to Sati. Surkanda is where the head of Sati had fallen after Shiva carried her on his Trishul from Kankhal, Haridwar, after she set herself on fire. You get a 360-degree view from the top of the temple. This temple is 8 km on the road from Mussoorie to Kaddukhal. 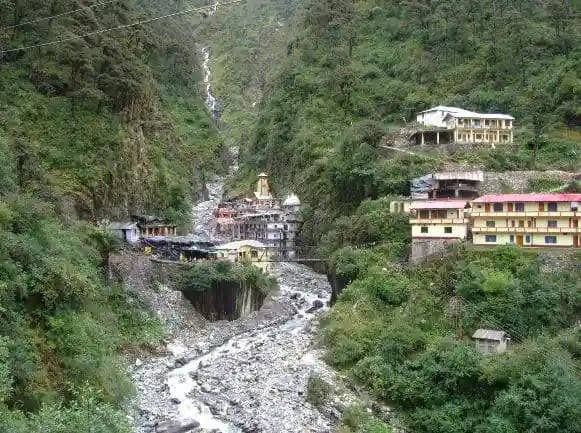 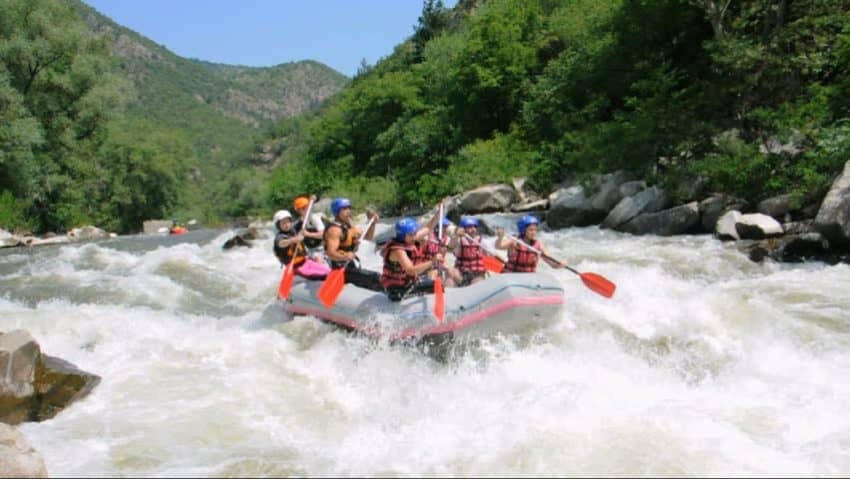 Raft on the Bhagirathi River, feeling the rush of gushing water of the main tributary of River Ganga. The thrill of the activity is one of the best you will ever have. The exciting rafting trip on the Bhagirathi River is an excellent way for adventure seekers to satiate their hunger. Packed with bundles of spirits, the waves ride you through the rustic villages, traverse through a splendid gorge and enter right into the confluence of Alaknanda and Bhagirathi before meeting the River Ganga. Flowing right through the heart of the Himalayas, one also gets the chance to see nature at its very best. So pack your bags and get ready for a tryst with the river. 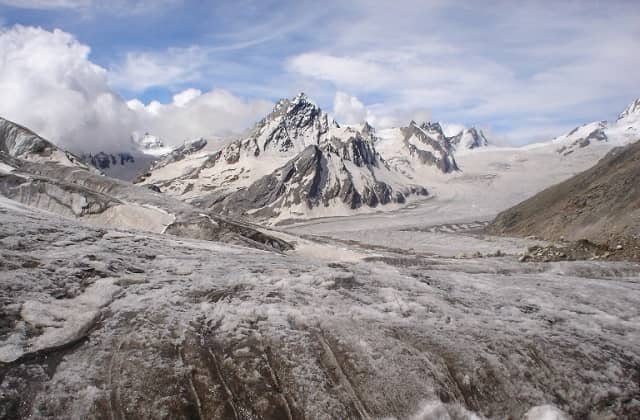 Khatling glacier is located in Tehri Garhwal of Uttarakhand district, the state known for its high, calm, and beautiful hills. Khatling glacier is a very important glacier of Garhwal Himalayas due to the source of the Bhilangana River. Around the glacier, there are thick snow-capped Himalayan peaks, which are known as the Jogin group (Altitude:6466m), Sphetic Pristwar (6905m), Barte Kauter (6579m), Kirti Stambh (6902m), and Meru. The trek for the Khatling glacier starts from Ghuttu, a place about 62 km. from Tehri. The total distance of this route is about 45 Km. There is a P.W.D. Inspection house and a Tourist Rest House at ghuttu. The other important places en route are Reeh, Gangi, Kalyani & Bhomakgufa. At Reeh & Gangi, Tourist Rest Houses are available. Gangi is the last village beyond which no facilities of any kind are available, and one has to make its own arrangements. The sight of the khatling glacier is most spectacular and alluring. From here, Masartal is 7 km. The route further goes up to Vasuki Tal and from there to Kedarnath. 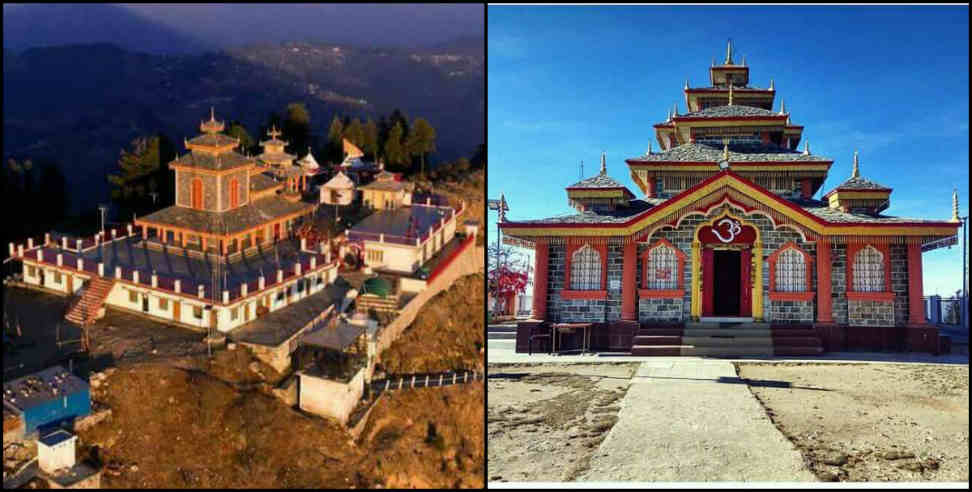 Surkanda Devi is a Hindu temple near Kanatal, Uttarakhand, India. It is at an altitude of about 2756 meters lies close to nearby hill stations of Dhanaulti (8 kilometers [5.0 mi]) and Chamba (22 kilometers [14 mi]), walking distance of approx 3 kilometers [1.9 mi] from Kaddukhal, the place where vehicles are parked. It is surrounded by dense forests and affords a scenic view of the surrounding region, including the Himalayas to the north. In certain cities to the south (e.g., Dehradun, Rishikesh), The Ganga Dussehra festival is celebrated every year between May and June and attracts many people. This is a temple which is situated among the trees of rounslii. It is covered with fog most of the time of the year. 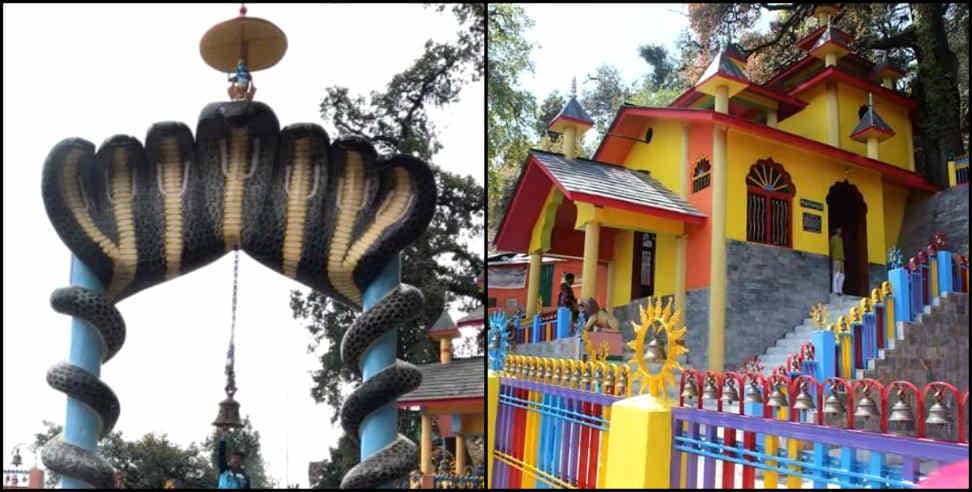 The Sem Mukhem Nagaraja is an ancient temple dedicated to Lord Krishna (also known as Nagaraja) and is located in Tehri Garhwal of Uttarakhand. The Sem Mukhem Nagaraja, or the temple of the king of snakes, is one of the famous Naga Tirthas or snake pilgrimage sites in the Indian subcontinent. According to the followers, this is the original layer of the Nag raja. The temple complex is very sturdily built and quite old. The style used in the Sem Mukhem Nagaraja temple architecture is very familiar with the style adopted to build the revered seat of Lord Shiva, the Kedarnath Temple. The door of the temple is very religiously built. It portrays the mythological scenario in which the Nag raja is spreading out his fan while the great proprietary god, Lord Vishnu, is playing his flute atop the Nag raja. 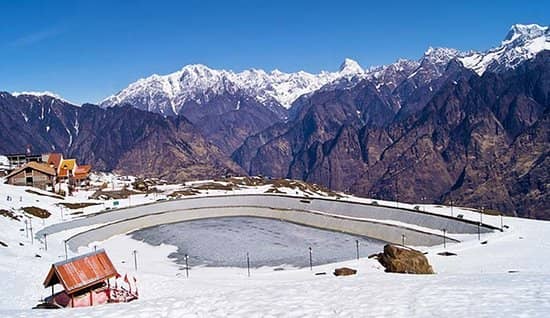 Dhanaulti is a hill station situated in the Garhwal Himalayan range located 24 km (15 mi) from the hill station of Mussoorie. Dhanaulti is a tehsil in the Tehri district. Dhanaulti is the base point for numerous treks into the snow-capped Himalayas, especially to the Tehri region of Garhwal. The most popular treks are through the dense alpine forests that take you to Surkanda Devi, Chandrabadni, and Kunjapuri, the sacred three Shakti Peethas of the holy Devi Darshan triangle. The best time to visit Dhanaulti is between March and June. 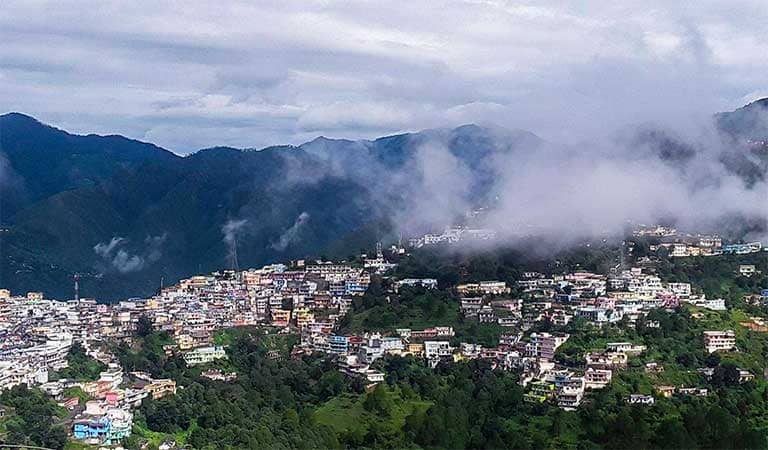 Chamba is a town in the Chamba district in the Indian state of Himachal Pradesh. According to the 2001 Indian census, Chamba has a population of 20,312 people. Located at an altitude of 1,006 meters (3,301 ft) above mean sea level, the town is situated on the Ravi River banks (a major tributary of the Trans-Himalayan Indus River), at its confluence with the Sal River. Though historical records date the history of the Chamba region to the Kolian tribes in the 2nd century BC, the area was formally ruled by the Maru dynasty, starting with the Raju Maru from around 500 AD, ruling from the ancient capital of Bharmour, which is located 65 kilometers (40 mi) from the town of Chamba. In 920, Raja Sahil Varman (or Raja Sahil Verman) shifted the kingdom’s capital to Chamba, following the specific request of his daughter Champavati (Chamba was named after her). From Raju Maru’s time, 67 Rajas of this dynasty ruled over Chamba until it finally merged with the Indian Union in April 1948. However, Chamba was under British suzerainty from 1846 to this time.