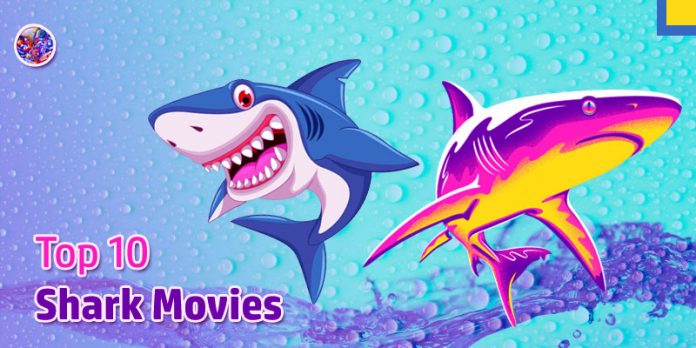 Since the release of “Jaws” in 1975, the masses have developed an undying fascination for shark movies. The lure of these thrillers with their over-the-top sequences and horrifying storylines holds strong across all age groups, even though the plots are not related to real incidents. A typical shark movie creates a gory atmosphere depicting the creatures as dark beings that will do anything to kill anyone coming in contact with them.

Think of shark movies as a roller-coaster ride through gut-wrenching action and mystery. It can transport you into a world where a predator is on the loose and lives are on the line. As a side note, deaths caused by sharks are pretty uncommon. In contrast, the chances of dying from accidents and diseases are way-way higher.

If you are reading this, it’s safe to say that you are a fan of shark movies. But have you ever wondered which are the best shark movies ever made? Read on to figure out. Our top 10 best shark movies list is based on a few key parameters appreciated by movie freaks.

Considered on par with “Jaws”, this modern cult classic shark movie hit the theaters in 2016. The movie showcases the story including a shark that is protecting its nutrient source, a whale carcass from other inhabitants and creatures. When everything seems to go smoothly, a surfer ends up becoming the victim of the shark’s fury.

This movie, featuring Blake Lively, is hands down the best CGI movie with sharks. The fight sequences are lifelike, keeping you on the edge of your seats. Unlike most shark movies, the human character is quite intelligent when tackling the shark.

What makes The Shallows stand out are its cinematography, fight scenes, and on-point CGI characters. Feel free to rent the movie on Vudu, Google Play, Prime Video, Hulu, Sling TV, and other online platforms.

Released in 1999, the movie single-handedly resurrected the shark movie genre after a long hiatus. It was the first shark movie to be released after the end of the classic Jaws series. The Renny Harlin movie features three Mako Sharks that undergo a genetic alteration. They go on a killing spree in an undersea facility, setting the tone for a thriller.

The sharks stalk their creators, kill them mercilessly and eventually go on to prey on other survivors in the facility. The movie, despite going overboard with the storyline, brilliantly blends horror and thrill, which makes it relevant even after more than 20 years.

Deep Blue Sea can be considered one of the cult classics thanks to the storyline, amazing performances, and unforgettable characterization. You can rent this movie on various platforms, such as Google Play, Vudu, Youtube, Apple TV, and Prime Video.

The Reef revolves around a group of friends who end up being stranded in a reef when their boat is destroyed. With no option left, they decide to swim towards land without any assistance. However, things soon take a terrifying twist when they discover that a shark has followed them along their journey. And, soon panic sets in, and horror strikes.

The movie uses real-life shark footage in the majority of scenes to create an impact. The fear and anxiousness are terrifying and realistic enough to elevate your movie experience. This 2010 shark movie is structured in a way to keep the viewers on their toes, making them feel the tingling sensation of fear slowly crawling up their spine with each scene.

Even in scenes without a shark, The Reef creates a sense of foreboding. Each second feels like a minute as everyone treads with caution and bated breaths as if the shark will pop up any minute. Overall, the whole ambiance is terrifying and suspenseful. The movie is available for free with a Prime Video Subscription.

Released in 2012, Bait follows a realistic storyline, based on the flooding of an underground supermarket and how it brings with it a set of unwelcome and predatory guests. The movie showcases people struggling for their lives amid an all-too-real shark scare.

The best part is the movie’s simple storyline, amazing performances, and suspenseful atmosphere. The movie also proudly showcases impeccable CGI scenes, and digital effects with the overall setting, backgrounds, and the danger lurking in the background.

For many, Bait is an underrated movie in the shark horror genre. That’s understandable given its well-executed scenes, decent storyline, stunning cinematography, and overall impact. The movie is available for free on Prime Video. You can access it on Tubi as well.

“47 Meters Down Uncaged” hit the screens in 2019, making it one of the new shark movies. It’s a typical horror film, creating a suffocating tension as the ghostlike and stony creatures trudge through the waters. What makes them deadly is their ability to hunt through sound.

The first twenty-odd minutes can be insufferable with severely annoying characters. But with the onslaught of the sharks, the tone is set for an exhilarating ride that creates some anxiousness and a whole lot of nail-biting anticipation.

It’s the sequel to 47 Meters Down, known for amazing CGI skills and a gripping storyline. The cave sharks look terrifying yet realistic and are better than their predecessor when it comes to the kill scenes. The movie is available for free with the Prime Video subscription.

The Meg is a popular shark movie released in 2018. However, the movie is guilty of holding back in a lot of horror scenes because of its PG-13 rating. Despite that, the film fares well on presentation, story, cinematography, and other key factors. However, what makes this flick so endearing for an everyday movie freak is its detail-oriented approach.

Every single scene and even the set design is intricate, having gone through an amazing journey just to achieve the level of detail. It is an underwater movie and the creators have incorporated the right mix of action and suspense. Moving at a break-neck speed, this big-budget flick manages to keep the viewers entranced despite its PG 13 rating.

The Meg features some stunning scenes, brutal kills, amazing characters, and great performances. The movie is available for free with TBS and TNT subscriptions and can be rented on platforms, such as Prime Video, Youtube, Sling TV, Google Play, and Vudu.

This 2017 release is a typical shark genre movie, with a simple premise that revolves around two girls stuck underwater in a shark cage for some reason. No prizes for guessing! The cage is in shark-infested waters. The movie creates an air of gloom and terror, inciting and milking on the fear of sharks, confined spaces, and even oceans in general.

The appearance of sharks is not that common in this shark movie. But whenever they appear, horror unfolds, building up a sense of fearful anticipation. The movie is full of suspense and terror, keeping you on the edge of your seats. However, its twisted and unexpected climax did not go well with a majority of movie buffs.

The movie is worth a try for its excellent plot and depiction. However, the ending might be a spoiler. Feel free to rent it on Youtube, Apple TV, Prime Video, and Google Play.

The sequel of the legendary “ Jaws”, Jaws 2 ran into difficulties in the production stage but was finally released in 1978. Overall, the movie wasn’t as good as its prequel but some parts were on par if not better, especially those involving the megalodon that terrorizes.

This new creature and the premise set around it create a more fearful and suspenseful storyline. The later sequels failed to match up to the level of Jaws 2. The movie features some interesting and brutal kill scenes, with a terrifying shark stalking teenagers in the middle of nowhere. The climax is obvious with the shark being ‘defeated’ and normalcy restored.

This sequel is an interesting watch even after 40 plus years of release. It seems like a stand-alone picture, not a duplicate version of the original one. The movies can be rented on platforms like Apple TV, Prime Video, Youtube, Google Play, and Vudu.

Released in 2005, 12 Days of Terror comes across as an educational film that revolves around the aftereffects of a shark attack and how brutal shark attacks are tackled. The movie features a series of shark attacks occurring in New England way back in 1916.

The movie derives references and inspiration from various shark movies portraying political drama, the reluctance of authorities to admit shark attacks or to close down the places where such incidents occurred. Produced as a TV release with a shoestring budget, It was not released in theatres. So, don’t expect flashy graphics and camerawork.

Think of 12 Days of Terror as a fine documentary film that recorded the incidents and their aftereffects quite accurately. It also draws a lot of incidents from the original Jaws and uses them as references. The movie unfortunately is not streamed anywhere currently.

This is a sort of fun movie centered on a group of college friends on a vacation. The movie revolves around the location of a lake where the group is slowly killed off by the sharks, one by one. The movie is not just a typical shark movie, as it includes an elaboration on how the sharks were present in an isolated lake that’s not attached to any ocean.

This 2011 movie also explores various species of sharks and their attacking techniques, which is rare for movies in its genre. The movie, despite being not as scary as some of the other movies on the list, is still a nice thriller for those with a fascination for sharks.

The movie instills a sense of fear through its intense cinematography and riveting story. You can access it for free on Starz, and rent it from Google Play, Vudu, Apple TV, and Vudu.

Many hate the idea of going deep-sea swimming, given the dangers involved. And a lot of them have a genuine reason after being traumatized by watching a shark movie. Horror and thriller movies, in general, are designed to instill a sense of fear and excitement, which unfortunately settles in our subconscious minds. No matter how scary these movies are, people still love to watch shark thrillers. Plus, sharks in movies have manifested into some out-worldly forms, be it a shark attacking through shallow waters (Jurassic Shark), sands (Sand Sharks), tornadoes (Sharnado), swamps (Swamp Shark), or some out-of-the-box ideas like the Ghost Shark and the Zombie Shark.