Top 10 Sports Movies of All Time 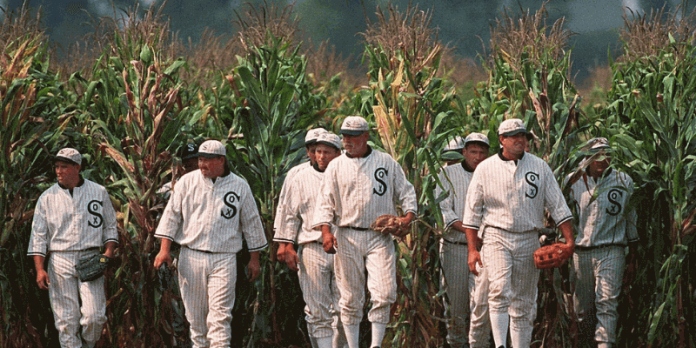 The fast-forward journey full of ups and downs, fear, courage, failures, lessons, all the feelings pictured from zero to fame are what sports movies are all about, right?! Depending upon the reference frame, one can position it in various genres. Sports and Movies never fade since the early time we have been into them.

Top 10 Sports Movies of All Time

here are the top 10 sports movies of all time you wouldn’t like to miss.

1. League of their own

The fictional story was well penned by Kelly Candaele and Kim Wilson and was produced under Elliot Abbott and Robert Greenhut and directed by Penny Marshall. It’s having an IMBd rating of 7.3 on 10. This movie is most suitable to tickle your funny bone and motivate you hand in hand. In the movie the All American Girls Professional Baseball League, Tom Hans, as the coach, is playing it in a witty and funny way. The main reason for starting the game was the league turning to fights during world war II, giving a completely new frame to the movie.

The movie depicts the 10 years of Muhammad Ali, an American boxer from 1964 to George Foreman’s Title in the “Rumble in the Jungle” acted by Will Smith. The movie also touches on the tenure of Martin Luther King Jr. And Malcolm X during these years. The movie is well placed in the sports genre covering sports, politics, religious aspects without harming any notions.

3. The Pride of Yankees

The well-classified sports drama with a rating of 7.7 is directed by Sam Wood and produced under Samuel Goldwyn. The movie is a tribute to New York’s Yankee, who passed away a year before the movie’s release due to Lou Gehrig’s disease publicly addressed after him. The movie was nominated 11 times to oscar, and the climax of the movie is at Yankee stadium with his polite words, “Today I consider myself luckiest man on the face of the earth.”

“If you build it, he’ll come” is the remarkable dialogue from the Field of Dreams penned by WP Kinsella and cast by Ray Liotta, Kevin Costner, Amy Madigan. Where the lead is afraid of getting old without ever achieving anything. The film has been into AFI’s top 10 listings and added to 25 National Film Registry. The movie seems usual, leading to an exceptional horizon.

The all-time framed movie “Miracle,” cast by Herb Brooks, Kurt Russell, and Micheal Mantenuto and is produced by Walt Disney Pictures, portrays the united states men’s hockey team and have to rat of 7.5. Critics have also praised Russell’s performance in the movie, making it more populous. It is easily available anywhere with the most suitable story of one of Olympics history’s greatest moments.

If one wants to go back to schooling sports days, this is the movie you should go for. The plot is based on the true story of Indiana State Champions. Milan High School, which drags the story back to the basketball championship won at the state level, marks the phrase ” stand up and cheer for HOOSIERS, “written by Angelo Pizzo and directed by David Anspaugh. Not to end up with a spoiler, it is worth spending a movie.

Not once, not even thrice, but the movie was filmed eight times with different phases of five sequels and rest to seventh and eight in Rocky Balboa. Starring by Sylvester Stallone and produced by Balboa productions in collaboration with Newline cinema and Revolution studios and movie have received best pictures, best director, best film editing, academy award, best soundtrack nominations, and an unending list to add. The is a roller coaster ride with diverse genres and is among the most catchy movies worldwide no one would like to lose.

The movie appreciated around the globe, to sum up, is a story of an ordinary boy starting from none, doing part-time jobs, college studies, homeless, befriending few to growing to victory. Robert N. Fried produces the movie; Carry Woods, and screenplay by Angelo Pizzo is another movie under Hoosiers, making a movie to the mark. You can find the movie easily, so go and hit the movie.

Banging 7.8 IMBd rating, the movie doesn’t stop there and grabs NAACP Image award, Bet Best actor award, Young artist award for best performance, and so on. It is an American biographical sports film co-produced by Walt Disney Pictures and Jerry Bruckheimer and directed by Boaz Yankin and starring Denzel Washington, Will Patton, Donald Faison, and Nicole Ari Parker. And the Front lining thing about the movie comes out as 73% of total 137 sample critics by rotten tomatoes were arisen positive, surely no one is willing to miss this kind of movie.

Birth of a legend, an American biography culture tell about the early life of Brazilian footballer Pele and his journey with Brazil to win the 1958 FIFA World Cup; the film is directed and written by Jeff Zimbalist and Michael John ballast the Plot under the guidance of Vincent Feola, young Pele utilizes historic Football skills to lead Brazil to the world cup in 1958, starring by Kevin de Paula, Diego Bonera, Rodrigo Santaro and music by A.R. Rahman.