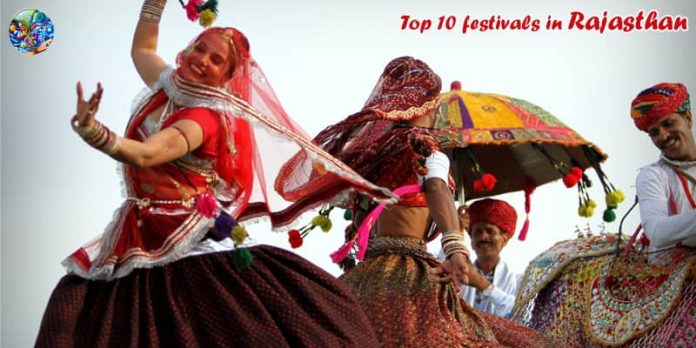 Rajasthan conjures up images of vast deserts, majestic palaces, Rajasthani clothing, and a royal welcome. These elements, without a doubt, capture the essence of Rajasthan. But not just this, Rajasthan is also a breeding ground for art, whether in the form of music, sculptures, folk dances, or other modes of expression. And the colorful festivities of the state reflect them all in the most beautiful way. Let us take a look at these alluring ways of escape. 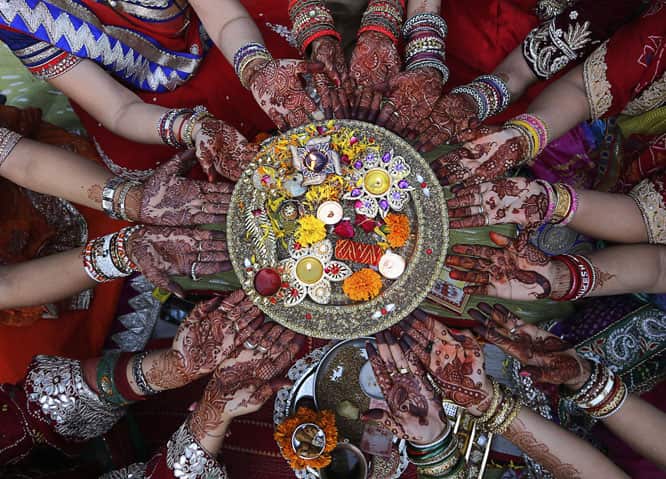 Jaipur, the land that is still drenched in the colors of fairs and festivals, enchants everyone who has the opportunity to see the splendor of festivals. Teej is one such festival, which takes place during the monsoon months of July and August.

Married women pray to Lord Shiva and Parvati on this day to grant them a peaceful and long married life. The women are dressed up in traditional Teej guise, the sky is sprinkled with colorful kites, and the scent of mouthwatering Teej delicacies lingers in the air.

Festival dates: Teej is observed during the Hindu months of Sawan and Bhado, which coincide with the Indian monsoon season, i.e. July, August, and September.

Major attractions: Teej Mata, riding in an antique palanquin known as Teej Sawari, leads a royal procession through the Pink city’s streets. The march is accompanied by a fanfare of dancers and band players. Ghewar, malpua, kheer puri, and dal bati churma are the delicacies prepared in the festival. 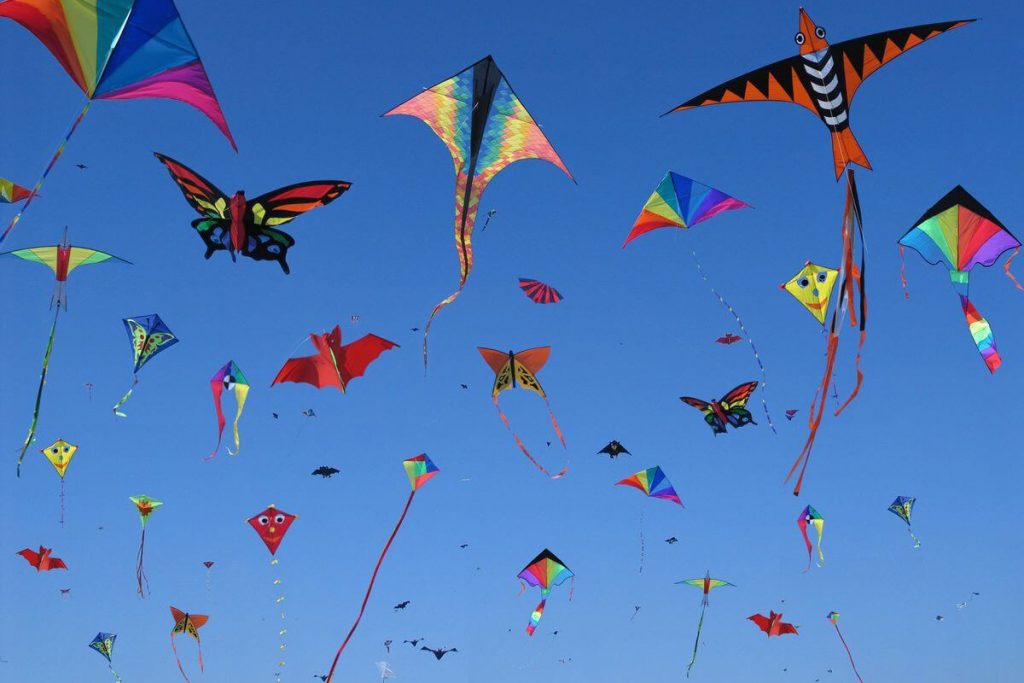 The International Kite Festival is an annual event held in the city of Jaipur on Makar Sankranti. A slew of vibrant, colorful kites adorn the placid skies of Jaipur and offer an enthralling spectacle, bringing the pink city’s colors to life. The vibrancy of the atmosphere is enhanced by the rock music and meticulous performers.

On Makar Sankranti, people fly kites to reap the rewards of sun exposure. During the winter, our bodies get sick and we get coughs and colds, and our skin becomes stiff. The Sun’s rays serve as treatment for the body when it passes through Uttarayana. The human body is constantly exposed to sun rays while kite flying, which eliminates the majority of diseases and insanitation.

Festival Dates: On the occasion of the Hindu festival Makar Sankranti, the Kite Festival is held for three days beginning on the 14th of January.

Major Attractions: The Jaipur Polo Ground hosts the festival’s opening ceremony. The Kite War is one part of the festival, while the Friendly Kite Flying Session is the other. 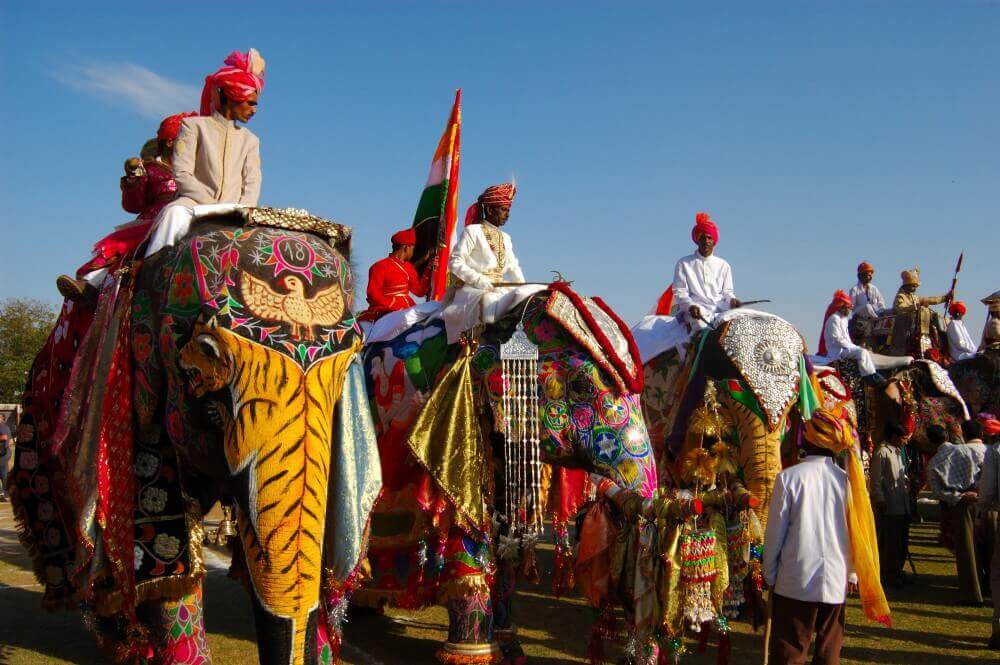 The Elephant Festival is an annual event held in the Pink City of Jaipur every year. It is observed on the day before Holi, the festival of colors. This festival is made much more vibrant by traditional dances, live performances, and songs. The event takes place at the Rajasthan Polo Ground, and it is open to the public.

According to Rajasthani culture, elephants represent royalty. The elephant is also connected to [Buddhism] and [Jainism], according to legend. In reality, the elephant has a long and illustrious history in Indian culture.

Festival dates: According to the Indian calendar, the festival is held on the full moon day of Phalgun Purnima (which occurs in February/March). 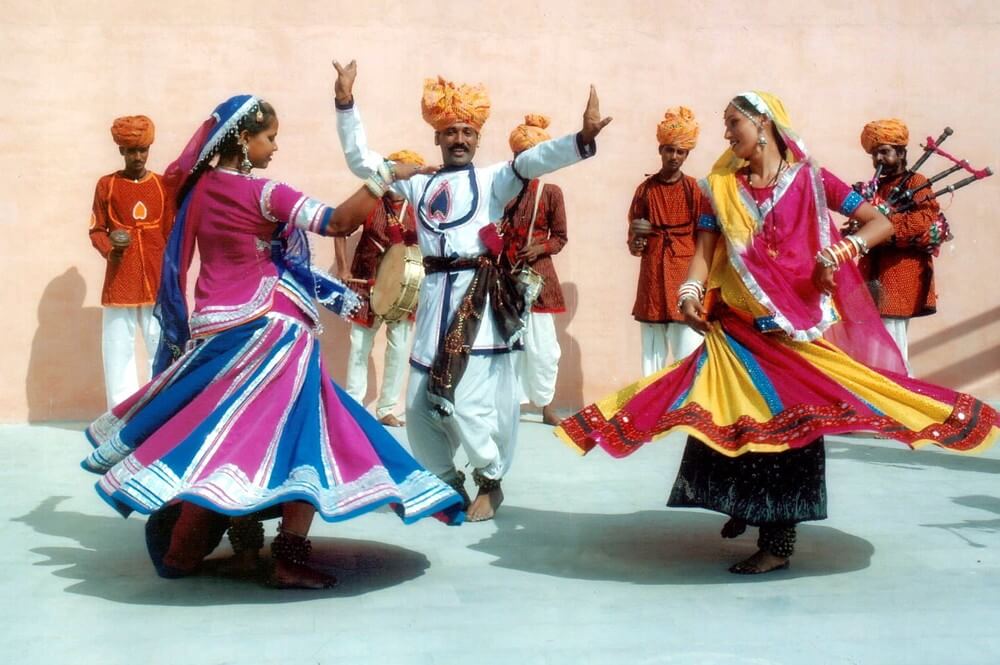 The Winter Festival, which is co-organized by the Rajasthan Tourism Development Corporation and the Municipal Board of Mount Abu, aims to highlight Rajasthan’s rich culture and heritage while also providing visitors with a relaxing vacation in the midst of some breathtaking scenery. The three-day festival kicks off with a glamorous parade through this Rajasthani hill station, which concludes at the world-famous Nakki Lake.

The Winter Festival is a haven for adventurers and sports lovers. The festival features a variety of events such as tug of war, kite flying, rowing, and skating, in addition to many traditional sports such as cricket and horse racing.

Festival Dates: The Winter Festival at Mount Abu takes place once a year in the last week of December, from the 29th to the 31st.

Major Attractions: Sufi Kathak and a variety of traditional Rajasthani folk dance performances such as Ghoomar, Daph, and Gair are prominent at the Festival. 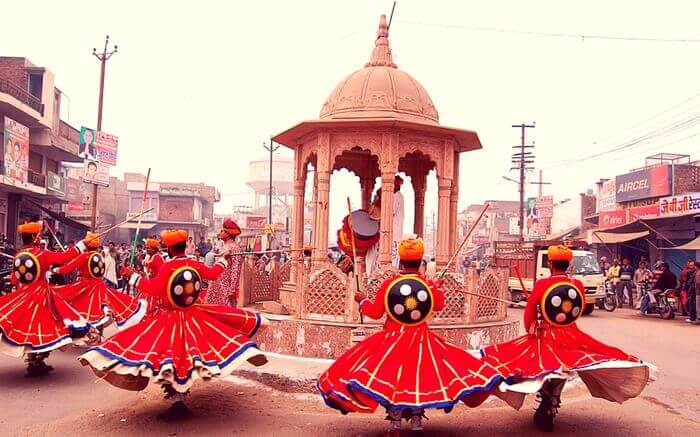 The Mount Abu Summer Festival is an annual celebration of Rajasthan’s ethnic and tribal identity, steeped in heritage and rituals. It is one of Rajasthan’s most well-known festivals. Rajasthan Tourism, the Municipal Board, and the Mount Abu and District Administration collaborate on this cultural extravaganza.

The two-day festival features a wide range of events, including dance, music, contests, performances, and fireworks. The festival begins with performers singing ballads and western folk dances. The festivities continue at the famous Nakki Lake, where an entertaining boat race is held.

Festival dates: It is held every year during Buddha Purnima and is widely observed by Hindus and Buddhists alike. 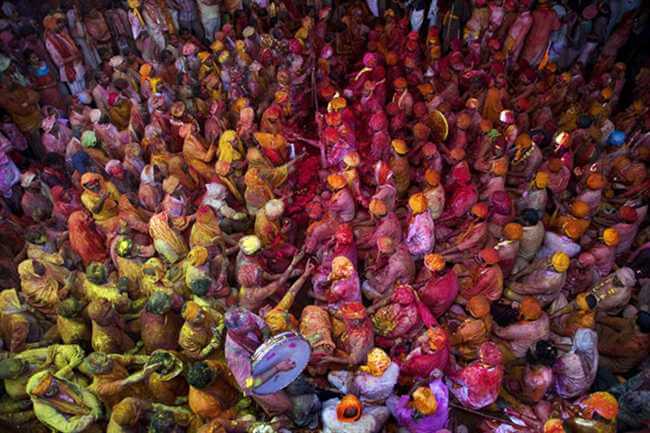 Braj Holi is a famous Rajasthani festival that takes place a few days before the main Holi festival. It is commemorated in the Brij area of Rajasthan’s Bharatpur district. Locals take part in the festival with zeal and solidarity, performing a variety of cultural rituals and stage performances, including traditional Rajasthani folk dance.

Bharatpur is near Braj Bhoomi, Lord Krishna’s birthplace and the spot where he spent his childhood. Though the festival is devoted to the Hindu god Krishna, it also represents Radha and Krishna’s, everlasting love.

Festival dates: Braj Holi is a two-day celebration that takes place before the big Holi festival.

Major Attractions: The Rasleela dance, performed by men and women, is the festival’s main attraction. Radha and Krishna’s love story is depicted in this dance style. 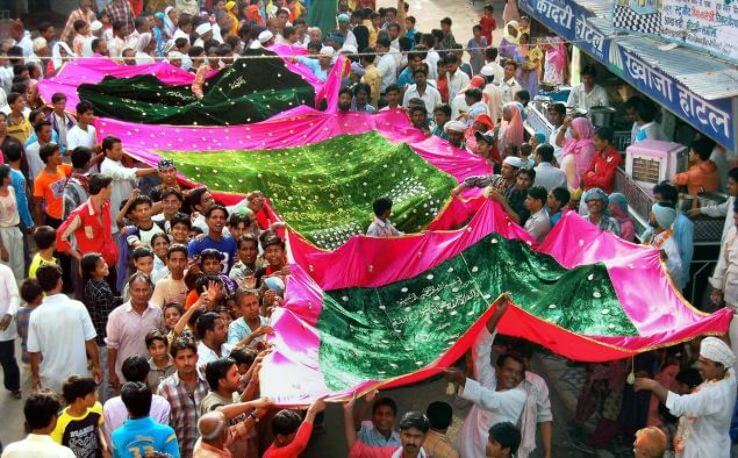 This festival commemorates the saint’s unification with Allah and is held at the tomb of Kwaja Moinuddin Chisti, a Sufi saint. Tourists come from all over the world to attend this religious festival. The tomb of the saint is cleaned with rosewater at this celebration and then draped in an embroidery silk cloth with offerings and prayer.

Major Attractions: Shijra, or the Chishti Order’s genealogical tree, is read by Moinuddin Chishti’s duty-bound Khadims, and then there’s Fariyad (prayers). Around 1:30 p.m. A cannon is fired to signal the conclusion of the ceremony. 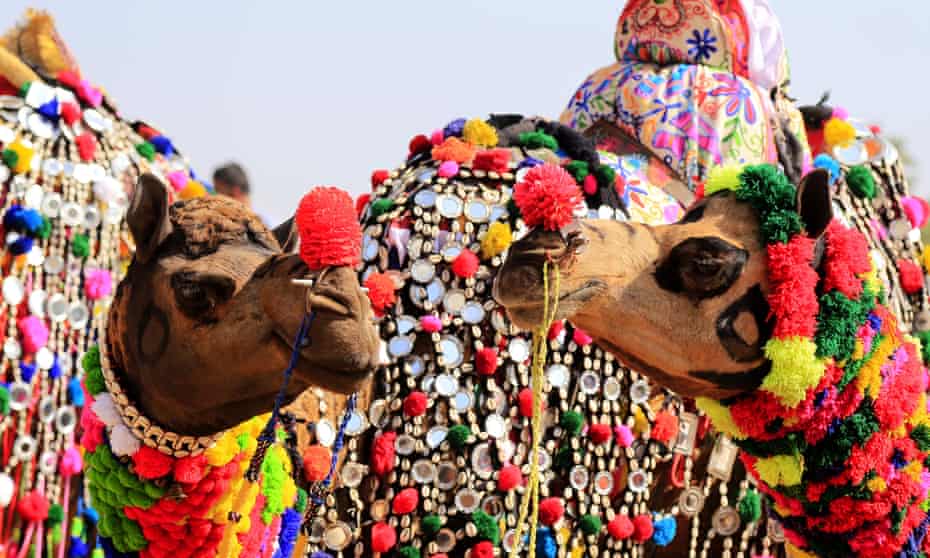 The Pushkar Fair, also known as the Pushkar Camel Fair, is a multi-day livestock fair and cultural festival held in Pushkar every year (Rajasthan, India). The Pushkar camel, horse, and cattle fair is one of India’s best. Apart from the livestock trade, it is an important Hindu pilgrimage season to Pushkar Lake. Given the cooler season and the variety of colorful cultural themes, the Pushkar fair has become a major tourist destination for both domestic and foreign visitors.

Festival Dates: The fair runs from the beginning of the Hindu calendar month of Kartik to the end of the Kartik Purnima, which falls between late October and early November on the Gregorian calendar.

Major Attractions: SkyWaltz promises exhilarating balloon rides over Pushkar in the early mornings and evenings. The evocative evening maha aarti (grand devotional rite using fire/light as an offering) ceremony performed alongside Pushkar Lake is not to be missed. 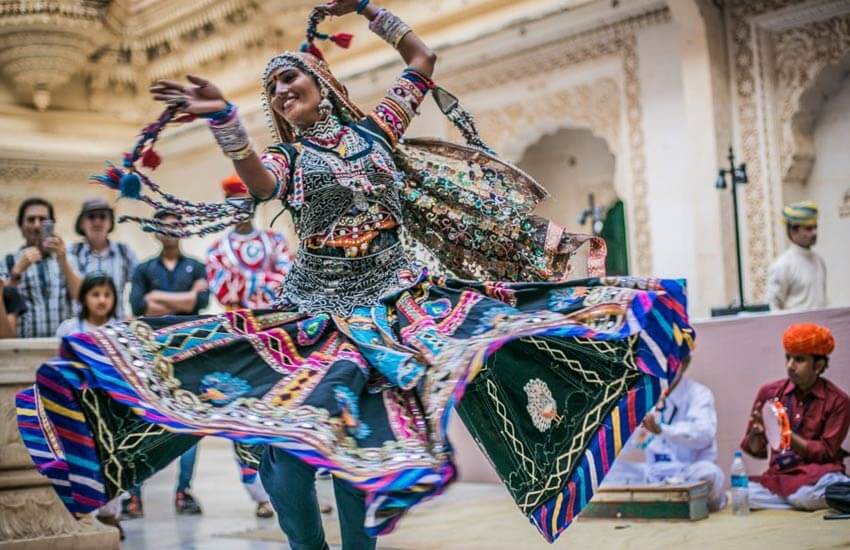 Rajasthan International Folk Festival (also known as Jodhpur RIFF or Jodhpur Folk Festival) is an annual music and art festival held at Mehrangarh Fort in Jodhpur, Rajasthan, to promote traditional folk music and arts. The festival brings together over 250 artists from all over the world for a 5-day voyage of music, magic, and art. As a “People’s Platform for Creativity and Sustainable Development,” UNESCO supports the festival.

Festival Dates: The dates of the Jodhpur RIFF are subtly different each year, but often fall in the month of October, to correspond with “Sharad Purnima,” the brightest full moon of the year in north India.

You must buy a donor pass online from the Jodhpur Riff’s official website in order to attend any of the festival’s activities. 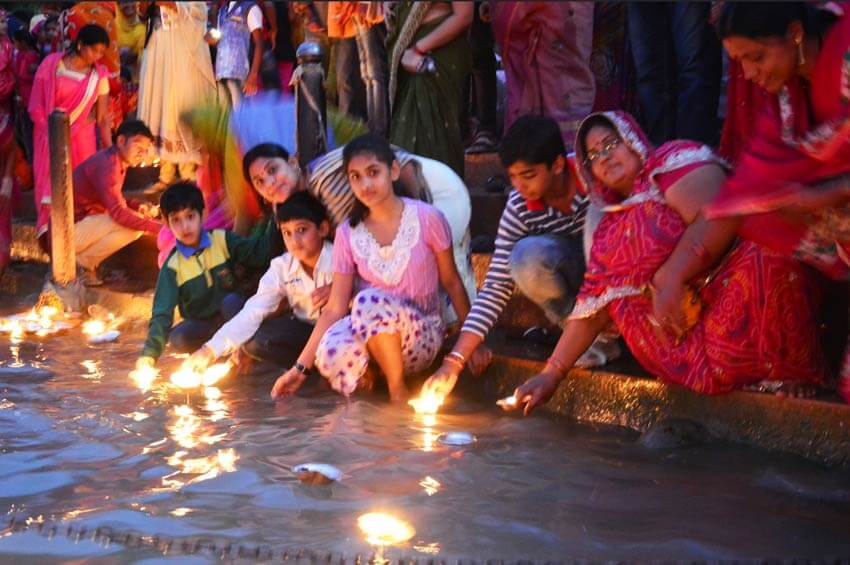 The Kolayat Fair is one of the most famous events in the town of Kolayat, which is located in the district of Bikaner in Rajasthan. The holy Kolayat Lake was the place of meditation for a Great Sage called ‘Kapil Muni,’ according to local tradition.

Kapil Muni is said to have meditated on this ghat for the liberation of humanity. The ghat became a very important location for the residents of this town as a result of this.

Festival Dates: Every year in October or November, the Kolayat Fair takes place (Kartik month based on the Hindu calendar).

Major Attractions: The mesmerizing sight of the beautifully painted ghats of the Kolayat Lake is the main attraction of the Kolayat Fair. During the Sandhya Aarti in the evening, the lake transforms into a visual spectacle. During the Deep Malika rite, earthen lamps are lit and set afloat on the lake’s waters, promising a visual feast. 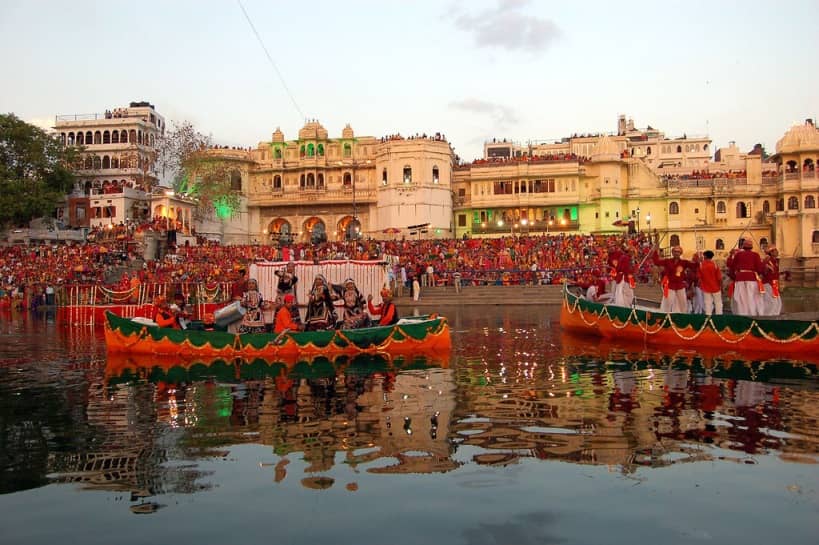 In Udaipur, the Mewar festival is held to celebrate the arrival of spring with zeal and devotion. During the festival days, the entire city of Udaipur is bathed in festive colors. Happy lighting and decorations adorn the fronts of local markets and stores.

The Mewar festival, which coincides with the Gangaur festival, is equally important for the Rajasthani people. They all assemble to dress up the idols of Lord Shiva and Goddess Parvati as is customary. Following that, a procession takes place in which people hold idols on their heads and parade through the district.

Festival Dates: In the month of April, the Mewar Festival is held for three days.

Major Attractions: The Royal House of Mewar’s ceremonies and traditions have been handed down without interruption for the past seven and a half decades, and they still take place with the same grandeur and ceremony as they did 75 years ago. The practices and ceremonies, on the other hand, have only grown to become more vibrant and alive.

These various colorful and traditional Rajasthani festivals are undeniably famous. Some are simply cultural activities, whereas others represent race or ancestry. These festivals are undoubtedly a genuine Rajasthani celebration of life, heritage, and culture. It allows you to see the various colors that the state has to offer. So what are you waiting for? Go book your tickets and drench yourself in these festivities in Rajasthan. Also, we would love to hear from you about your experiences, so go dash the comment box below!