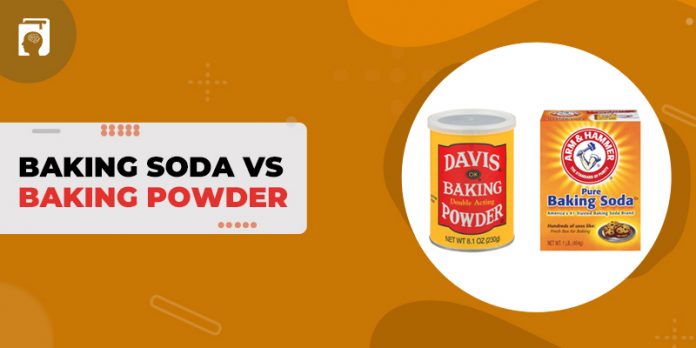 What is the difference between baking powder & baking soda? That’s exactly what we are discussing here in detail. Read on to be in the know of things. we should check their comparison between Baking Soda vs Baking Powder, So let’s start your journey.

Baking is an art and baking powder and baking soda are vital elements of that art. Both work their magic in baked products, providing the perfect taste and texture.

But have you ever wondered what’s the difference between baking powder & baking soda? Which one should you use? Do they have the same function? Is it possible to use them interchangeably? Is it truly necessary to use both when a recipe specifies it?

It’s crucial to know the baking soda and baking powder difference. Both acts as leavening ingredients but are different. They are used to raise baked goods by releasing carbon dioxide before they’re cooked. Baking soda is included in baking powder, however, the two compounds are utilized in distinct ways.

Let’s go through them to understand and analyze their features, one by one.

What is Baking Soda?

To understand the difference between baking powder & baking soda, let’s first discuss what is baking soda. Well, its scientific name is Sodium Bicarbonate, represented by the formulae NaHCO3. It is a salt that has a Na cation, and an HCO3 anion. Simply put, baking soda is a crystal white substance with a salty flavor. It is used as a leavening ingredient in baking, meaning it induces the foaming and softening of the mixture.

Sodium Hydrogen Carbonate is another name for it. Baking soda is used in baked goods including cakes, muffins, and cookies.

When mixed, baking soda and vinegar result in a chemical reaction, and bubbles are formed. Carbon dioxide is produced by this process. A similar process occurs in our biscuits, pastries, bread, cake, and other baked goods. When a recipe asks for baking soda, it typically also calls for buttermilk, yoghurt, lemon juice, vinegar, cream of tartar, honey, or apple sauce. This ACID is required in the recipe because it reacts with the baking soda, releasing carbon dioxide and allowing your baked product to expand.

What is Baking Powder? 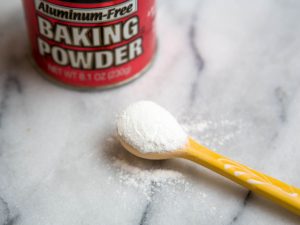 Baking powder has a leavening mechanism that produces CO2 when it comes into contact with water. Baking powders comprise baking soda as well as acids with which the baking soda might react. Most home chefs are probably unaware that these are divisions rather than individual elements. However, the chemicals that makeup baking powder or baking soda can differ. Depending on the food being made, industrial food makers utilize varied compositions and particle sizes to achieve the desired results.

Baking Powder vs Baking Soda: Key Points you Should Know

Here’s baking powder vs soda summed up for you.

Baking soda and baking powder have qualities that overlap. The baking business is completely reliant on them to provide us with some delectable baked products. Apart from the food industry, they are helpful to us in our homely activities like washing clothes and removing stains or bad odour. Hopefully, this will help you get a clear picture of the difference between baking powder & baking soda.