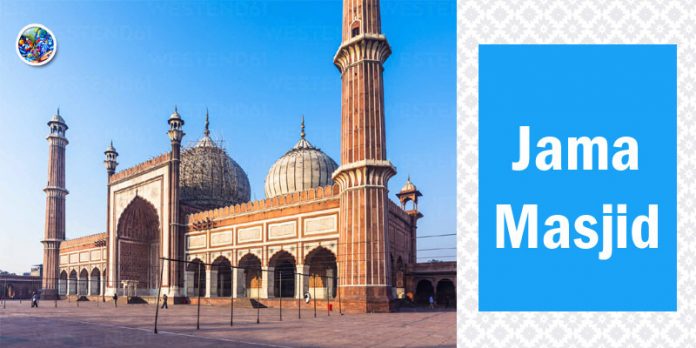 Jama Masjid is one of India’s Heritage sites, symbolizing a community’s culture, history, and ethos. Even though it is surrounded by the congested alleyways of Old Delhi, numerous foreigners and locals visit it each day to experience the magnificence of this structure.

Shah Jahan spent generously to create this architectural masterpiece. It took a staggering ten lakh rupees and 5,000 workers to complete the structure. The Jama Masjid, which is 80 meters long (261 feet) and 27 meters broad (90 feet), was finished in 1656 AD. Its porch is constructed of red sandstone and stands 9.1 meters (30 feet) above the ground.

Jama Masjid is an Arabic term, meaning “world-reflecting”. The mosque’s construction was influenced by Hindu and Jain architectural traditions, as evident in the motifs employed in the mosque’s western part. With an open courtyard of 99 meters (325 ft) with seating for 25,000 people, this mosque facilitates a capacity of 85,000 people! It is considered one of the best Mughal mosques. The mosque has three entrances: north, south, and east. 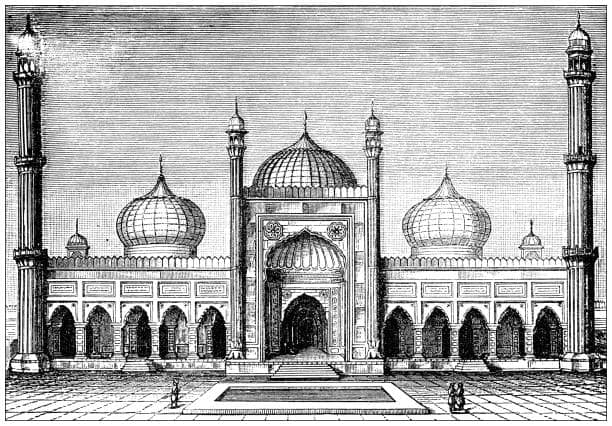 Jama Masjid Delhi was built in honor of Shahjahan’s favorite daughter, “Jehan Ara,” a devoted Muslim and disciple of Sufi saint Moin Uddin Chishti of Ajmer. The saint led her father out of the grief of his beloved Begum Mumtaj Mahal. The name, derived from Jummah, means Friday. Its name, Friday Mosque, refers to the enormous assembly held every Friday. It is the final architectural opulence of Shahjahan. The mosque was inaugurated in 1656 by Syed Abdul Ghafoor Shah Bukhari, an Islamic scholar from Uzbekistan.

Following the British triumph in the 1857 rebellion, Delhi Jama Masjid was seized and used as a military base for the next five years. The British were eager to bring the mosque down but shelved the plan on the insistence of the local community. Eventually, they agreed to restore it as a place of worship in 1862. However, during the 1857 protest, the masjid madrasa at the southern entrance was destroyed. When the Masjid began to deteriorate, the last Nizam of Hyderabad, Asaf Jah VII, raised funds to rebuild it. He repaired a quarter of the mosque to its erstwhile glory. 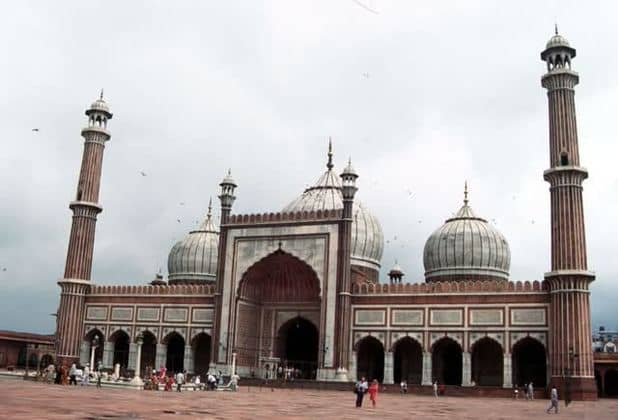 The mosque is surrounded by the Zenana Rauza and the Jammat Khana halls from two sides. The walls of Jama Masjid are adorned with inlaid geometric patterns, colorful tiles, and calligraphic inscriptions. The mosque, designed by Ustad Khali, has a magnificent front of eleven arches decorated with marbles. Three projecting galleries separate the minarets, which are dominated by twelve-sided domed pavilions. The expansive central enclosure within the structure is a site for prayer and meditation.

The courtyard is massive, 90X200 feet in diameter. It features a white and black decorated marble floor that mimics a carpet for prayer. The main entrance is on the mosque’s eastern side and is adorned with carved arches and pillars. Mughal-era paintings, inscriptions, and colorfully decorated tiles adorn the arcade walls. There’s a dedicated area for the devout ablutions before prayer at a central pool in the center of the mosque.

The Masjid sits boldly on a plinth in the traditional yet lively market. It is located near Red Fort, which overlooks Mecca in Saudi Arabia. 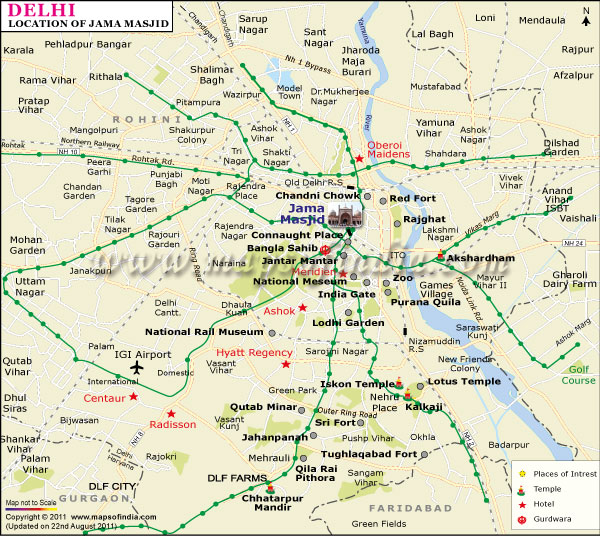 By metro, you may reach Delhi Jama Masjid by getting out at the Jama Masjid station, an expansion of the Violet Line. Heritage Line or the Yellow Line can also be opted for to get to Chandni Chowk. 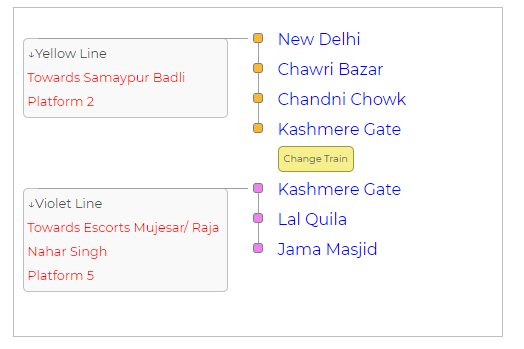 Rent a vehicle and drive down to the mosque, although parking and negotiating the streets of Chandni Chowk may be difficult.

You may also take a local cab or Uber to Jama Masjid. Check to see if the driver has turned on the meter.

4. When is the Best time to visit Jama Masjid?

You are better off visiting the Jama Masjid before noon to skip gatherings and traffic. Prefer not to visit on Fridays, or you will be dealing with gathering for Friday prayers. Also, be attentive to your surroundings during namaz.

5. How can I acquire tickets and how much do they cost?

Jama Masjid Delhi has free entry. However, tourists must pay a fee of 4.22 USD (INR 300) for photography. If you wish to visit the five-story minaret, extra charges would apply.

When visiting during prayers, avoid passing in front of someone offering namaz, as this is viewed as disrupting, impolite, or breaking the relationship with the divine.

Foreigners must pay an additional 4.22 USD (300 INR) to snap photographs using their phones or cameras. However, taking photographs should be avoided during prayers.

Put on a modest outfit. It’s mandatory for both males and females to cover their legs and heads. Also, avoid wearing sleeveless clothes. If you’re not sure what to wear, you can rent a robe at the North Gate. When you get to the mosque’s entrance, remove your shoes. You may either carry them in a bag with you or deposit them at the desk for a fee of 0.14 USD (10 INR).

You may be forced to hire a robe under the pretense of being improperly clothed. You will be provided entry if you cover your shoulders, legs, and head adequately. Some may also insist on paying the camera charge. If you want to climb the minaret for the views, you will be hindered by a metal security grill, forcing curious tourists to pay the price for the view. Singular female climbers should avoid the tower since it is crowded. The risk of being harassed runs high for them.

6. Top things to do within Jama Masjid For having quality time in Jama Masjid, you might have an endless bucket list. So, here are some significant things you might enjoy at one of the most famous monuments of Delhi. !

Four towers and two minarets flank the mosque. Both minarets have five stories and stand tall at 40 meters. They are a sight to behold, intricately carved out of red sandstone and marble.

There’s a cabinet placed at the northern entrance. It’s a treasure-trove of relics associated with the prophet Mohammad, which makes it so significant. It features:

You can step into only one minaret. The other is inaccessible to the public. 121 steps lead up to the mosque, with abundant space. Yes, you can get a bird’s-eye view of Delhi from the Jama Masjid’s Minaret.

There are several cats at Jama Masjid that move from one location to another. Adoring or following them might be a source of entertainment for you. Feel free to feed hundreds of Pigeons hovering in and around the premises. Eagles might be visible roaming the endless sky during the dawn, which is a feast for the eye. 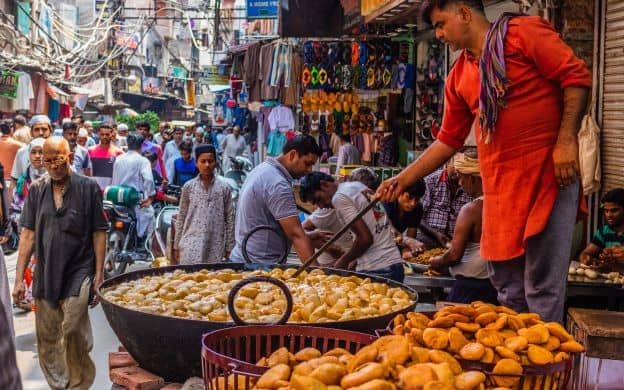 When visiting Jama Masjid, foodies will be spoiled for choice. There are several popular cafes in the vicinity to explore for some delectable local delicacies.

This restaurant has been there since 1913, located near Jama Masjid, opposite Gate 1 in Gali Kasabian. It serves delectable Mughlai food. Try the Mutton Korma, mutton seekh kebab, chicken tikka, and Khameeri roti here! Finish with kheer Benazir (rice pudding).

Some of the greatest kebabs in Delhi can be found here. Choose from juicy beef or mutton kebabs that go nicely with silky Rumali Rotis.

The chicken tikka with butter curd is a must-try.

This diner was established by India’s first Prime Minister, Pt. Jawaharlal Nehru, a few meters away from Jama Masjid, opposite Gate 1. Here, you should try the chicken Jahangiri and the chicken biryani.

8. Best Things to do near Jama Masjid 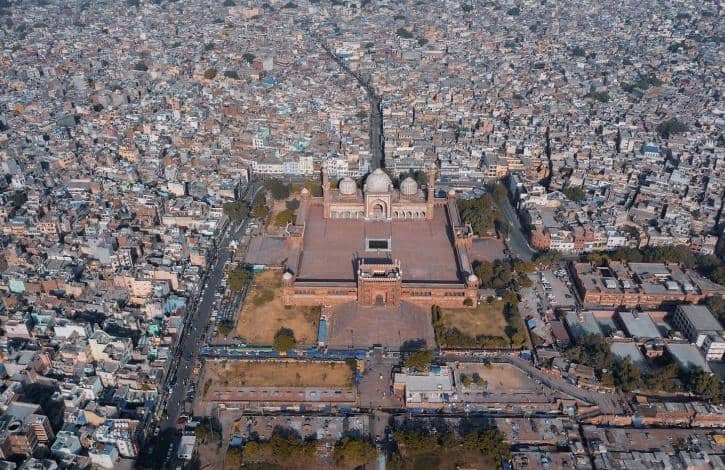 Traveling is much more than just sightseeing, and hence Jama Masjid is not only filled with attractions inside it, it has a lot to offer in the environs as well.

Akbar is credited with building the major chunk of the Agra Fort but his grandson, Shah Jahan, also had a role to play in its construction. The fort was initially erected by Akbar to serve as the primary palace of the Mughal monarchy. Shah Jahan brought down parts of the fort’s structures to make way for magnificent white marble palaces and mosques.

Even after many ups and downs, Jama Masjid stands strong as one of the significant monuments of Delhi. And, such a grand place ought to have some non-obvious facts.

Visiting Jama Masjid would transport you back into history. Not only the mosque but also the streets resonate with history and culture. This lovely haven of peace in the middle of old Delhi is a must-see. Dressing conservatively might not be everyone’s cup of tea, but it will make you feel like a local. Hope this article will help you make the most of visiting this iconic architecture. It is a cultural, visual, heritage, religious trip giving one a chance of a grand feast and shopping.