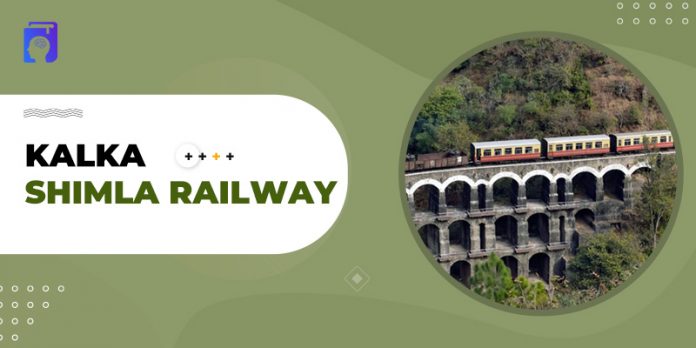 Keen to admire the panoramic views of the “Queen of Hills,” Shimla? Why not take a train from Kalka to Shimla? The Kalka Shimla Railway is more than just a toy train. Instead, it’s your ticket to the region’s imperial history and some breathtaking views. Being a World Heritage site, this railway track has international recognition. The toy train Kalka to Shimla is one of the most implausible achievements of engineering, given the rough, hilly terrain. In comparison to other toy trains, it is capable of covering a long distance, effortlessly.

To know more, proceed to read this article that offers all the information about the Kalka-Shimla Railway Tracks and the toy train. 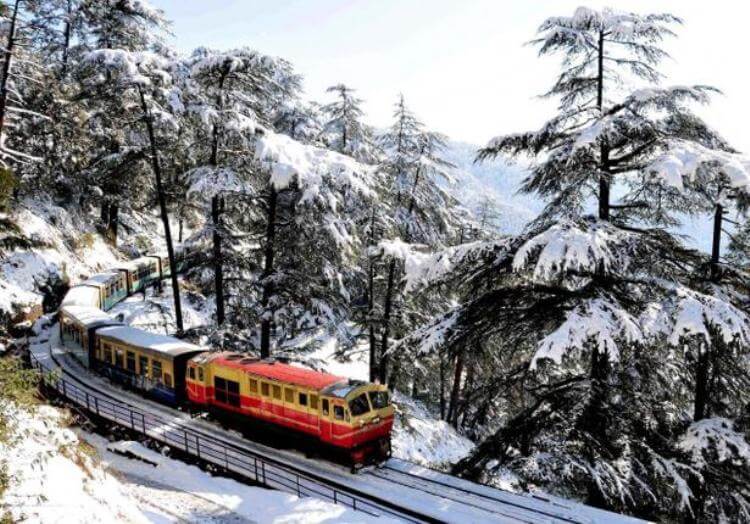 After the first Anglo-Gurkha war, the British came up with a beautiful, sleepy town in the Himalayas, i.e. Shimla, earlier named Simla. In 1864, the British Empire made Shimla their summer capital and used it as headquarters for the British army. However, connectivity was difficult due to the lack of transportation. So, in 1903, the British Empire built the Kalka-Shimla narrow gauge for simple and speedy access to Shimla. And, they called it the “British Jewel of the Orient.”

The Kalka–Shimla Railway is a narrow-gauge railway line spreading across 96.6 km. It was built to connect Shimla with the rest of India. The route features 107 tunnels and 864 bridges, which makes it so exciting. H. S. Harington was the project’s chief engineer during the time of construction.

The Kalka Shimla Railway is a single track covering a functioning rail link created in the mid-nineteenth century. It is a symbol of incredible technical and material endeavours that opens up an enclave to the mountain populations. The world’s highest multi-arc gallery bridge and longest tunnel (during construction) were testaments to the amazing engineering skills.

There are 864 bridges on the railway, with a prevailing elevation of 3%. Moreover, there are 919 curves, out of which the steepest is 48 degrees. This toy train track begins at 656 meters and terminates at 2,076 meters in Shimla. During that time, It employed 20.8 kg/m rail, but after some time, 29.8 kg/m rail was eventually installed. There were a total of 109 tunnels at the beginning, but severe landslides caused destruction, and the tunnels were reduced to 102 tunnels.

Description of the Toy Train Journey 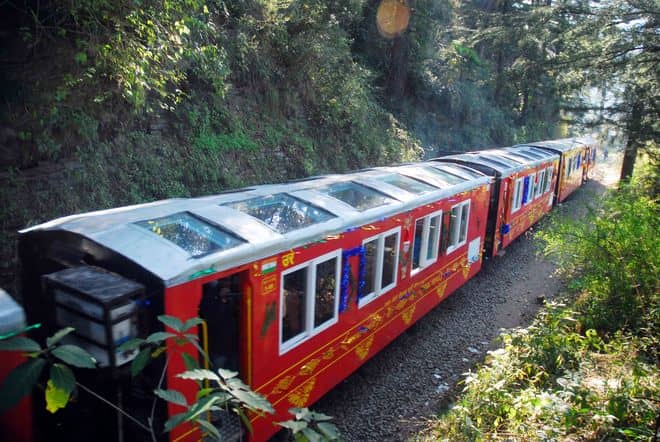 The Kalka-Shimla toy train ride was introduced in 1903 and is still considered one of India’s most spectacular technological accomplishments. Being one of India’s most incredible toy trains, the Kalka-Shimla Toy Train covers a distance of 96 kilometers in length. It offers the best and prominent scenic train rides because of the route it travels. The track includes a broad array of awe-inspiring vistas.

Throughout Kalka via Shimla, this voyage goes on a narrow gauge, showcasing passengers with stunning vistas of waterfalls, Rocky Mountains, thick pine woods, valleys, and picture-perfect hill stations along the way. All of which will entice you to dismount and revel in their glory. The miniature train covers 16 different stations before its final arriving station in Shimla.

People can enjoy all the scenic views of several tourist attractions through single-ticket purchases. The entire journey roughly takes five and a half hours to cover all the 864 bridges, 102 tunnels, and 919 breathtaking curves.

Direction and Route of Railway

Passengers on the Kalka-Shimla railway might encounter incredible and beautiful scenery and enclaves that can fascinate them to the fullest. The path begins at zero meters in Kalka and winds its way upwards along the narrow track. The train begins going steeply at 656 meters, travelling through 18 stations before arriving in Shimla, which is at the height of 2, 076 meters in the Himalayan foothills.

The train’s speed decreases as it ascends steep mountains and turns. Following are those 18 stations where this toy train halts:

All of the above 18 stations contain small tea and snacks stalls that offer local food items to the passengers to make their journey more interesting. The Barog Station holds the utmost popularity among all these stations because of the longest tunnel and the bridge offering mesmerizing view.

This tunnel counts as number 33, which is about 1143.61 meters long, and the bridge holds the number 226 in counting. This bridge is another fascinating engineering testament that passes through a deep valley between steep hills on both sides.

Territorial Regions That the Railway Covers 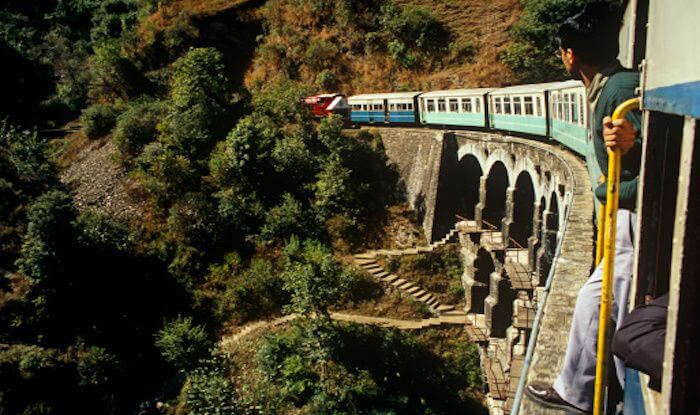 There are mainly six types of trains in the Kalka-Shimla Route. These are as follows:

The Himalayan Queen Express train route has nine stops and is fortified with standard car seats. Passengers can disembark at any of the stops along the trip to feed their eyes and souls with stunning landscapes and mesmerizing views.

The Rail Motor Express consists of a glass roof and offers a scenic front view to the passengers. This train has a resemblance to a bus and can carry up to 18 passengers. There is only one stop in Barog, and it is an expedited service with food. It travels twice a day from Kalka to Shimla and Shimla to Kalka.

In the Shivalik Queen train, a ten-carrier premium fleet is available. Each carriage includes wall-to-wall carpets, two restrooms, and wide windows and carries up to eight people. The Chandigarh office of the Indian Railway Catering and Tourism Corporation (IRCTC) governs this service.

Reservation Procedures of the Toy Trains

The reservation procedures are very simple and easier to carry. The passengers can avail the tickets for the Kalka-Shimla toy train at the railway stations. You can also book the tickets from the official websites of IRCTC (Indian Railway Catering and Tourism Corporation).

This article covers every single detail about the Kalka Shimla Railway Tracks and trains. We hope that it can clear all doubts and curiosities you hold for this heritage. IRCTC has offered one of the best gifts to the passengers of the Kalka-Shimla toy train. Now you can easily plan your small trip with your friends and families and enjoy it.