10 Most Expensive House in the World 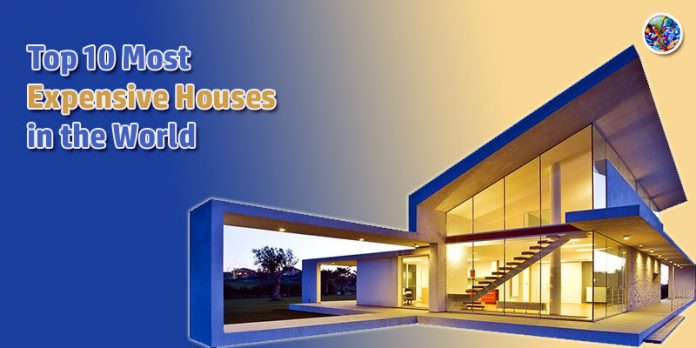 The lure of luxurious mansions holds strong for everyone, regardless of age, gender, occupation or nationality. With gorgeous views, huge chandeliers, a plethora of rooms, and aesthetically designed spaces – it’s downright perfect for you. Well, while that dream is still manifesting, let’s look at the 10 most expensive house in the world for research purposes or just to feel envious or amused. Maybe, someday you’ll have a house as beautiful and grand as the ones mentioned below.

10 Most Expensive House in the World

In this article, let’s check out the most expensive house in the world with their details listed. 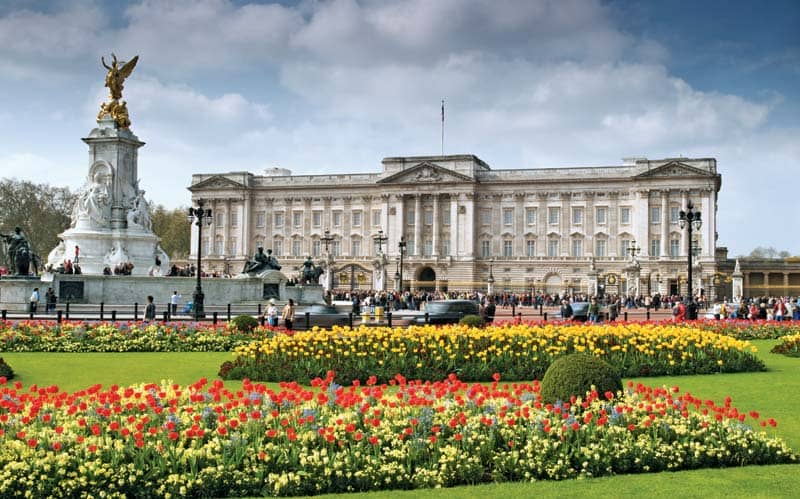 Valued at 2.9 Billion USD, this is a massive property owned by the British Monarchy. It comprises more than 700+ rooms, about 200 staff rooms, 50+ royal, and guest bedrooms, more than 90 offices, 70+ bathrooms, and 19 staterooms. So, it’s easy to guess where all the money went.

Situated in the city of Westminster in London, it has been the official residence of the Queen of England since 1873. The palace is not only the most expensive house in the world but also comprises the most number of rooms to ever exist in a house. It covers about 828,000 sq. feet with just the garden spanning across a staggering 40 acres.

Known as Buckingham House prior to 1730, the palace is an architectural masterpiece with beautiful, aesthetically themed rooms, decorated with expensive and unique pieces of art. However, it still isn’t the largest palace by volume. That credit rests withThe Royal Palace of Caserta, Italy. 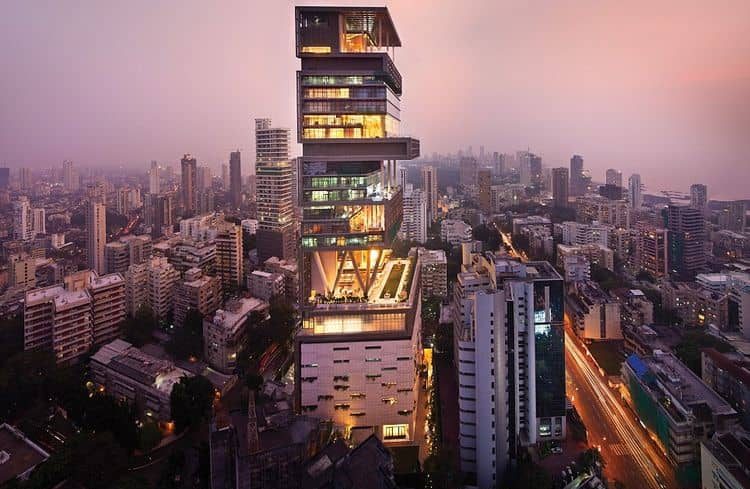 Antilia is the world’s most expensive house and the biggest private property to ever be built. The property is spread out on 400,000 square feet on Altamont Road, Cumballa Hills, Mumbai. India’s richest man, Mukesh Ambani owns the 550 feet skyscraper. The property accounted for 2 Billion USD and four years.

Antilia consists of 27 floors with extra-high ceilings, making each floor the height of an average two-storeyed building. As the most expensive house in India, it can withstand an earthquake of magnitude 8. It has six floors dedicated only to cars, a service station, a temple, a 50-seat theatre with a wine room, nine elevators, and staff housing. Also, a spa, three helipads, salon, ballroom, yoga studio, ice cream room, and multiple cinemas adorn the property.

The house reportedly requires a housing staff of at least 600 people. Perkins & Will, an architecture firm based in Chicago in collaboration with the hospitality design firm, Hirsch Bedner Associates designed and constructed the property. However, its location courted controversy, being located near one of the most poverty-stricken areas in Mumbai. 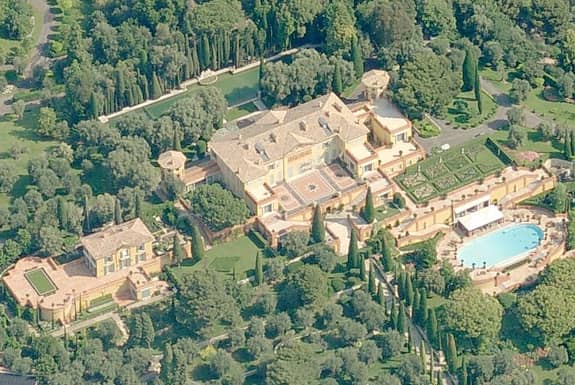 Priced at 750 Million USD, this Villa is the third on the list of the most expensive houses in the world. It’s currently owned by the Russian billionaire, Mikhail Prokhorov, who bought it in 2008 for 465 Million USD from Brazilian philanthropist Lily Safra. The seller inherited the villa after the death of her husband, Edmond Safra, who was a Lebanese Banker.

Spread across approximately 50 acres, the villa sits pretty in the gorgeous landscapes of Frances Alps-Maritime department in the Cote D’Azur region. Named after its original owner, King Leopold II of Belgium, the villa has had several prestigious owners like Gianni and Marella Agnelli, Izaak, and Dorothy J. Killiam. an American architect, Ogden Codman Jr. renovated it in the 1920s. He completely redesigned the villa while maintaining its vintage and royal aesthetic.

The house features about a dozen bedrooms, a commercial greenhouse, a swimming pool and pool house, a helipad, and even an outdoor kitchen. The Villa is also famous for it is the primary set for Alfred Hitchcock’s 1955 film – To Catch a Thief. 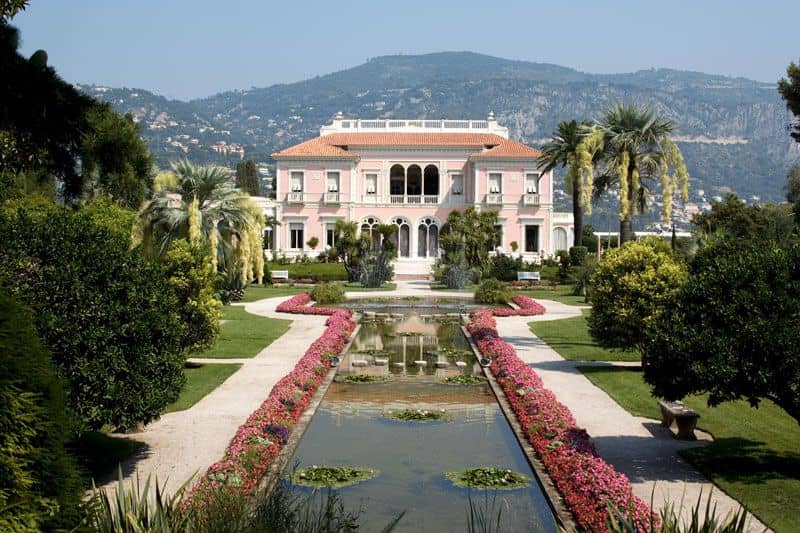 Priced at 410 Million USD, the 18,000 square feet home comprises more than a dozen bedrooms, a massive swimming pool, and other cutting-edge amenities. It also houses a gorgeous library featuring 3,000+ books on flora and naturalism. The house came up in 1830 and welcomed its new owner in 1850 in the form of the mayor of Villefranche-Sur-Mer. He operated his Olive tree farm from the property.

His descendants later decided to sell the building to King Leopoldo II of Belgium in 1904. The new owner decided to increase the expanse of the gardens surrounding the property. The property changed hands and the Italian distiller, Davide Campari-Milano is its present owner. The owner of the house once stated that the villa could easily be the most expensive residence if put on the market. He attributed this to the property’s history, luxury and prime location.

The property has approximately 35 acres of gardens and derives its name from the cedar trees located on its grounds. Think of the property as a royal haven with beautiful royal traditional designs spread throughout the premises. The intricate artwork, beautiful chandeliers, a massive stable, ancient furniture, gilded woodwork, a ballroom, and even a bronze statue of Goddess Athena and a handmade pond also add to its appeal. Also, the house offers gorgeous views of the ocean. 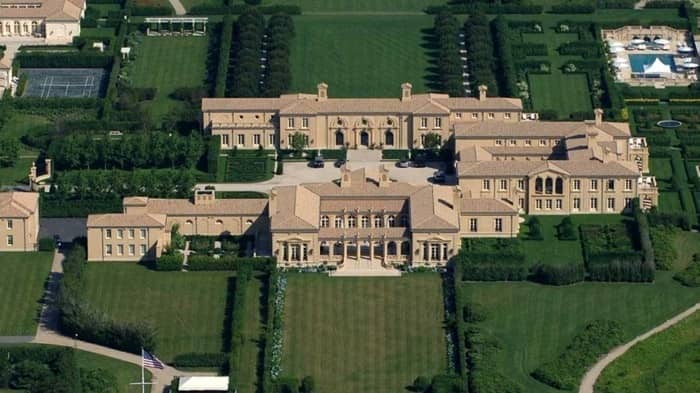 Designed by Perkins &Will, a Chicago-based architecture firm, the property is owned by Ira Rennert, the owner of Renco Group. With a staggering market price of 248 Million USD and an inherent grandiose and luxury, this 63-acre property makes it to the list of the most expensive house in the world.

The house consists of about 30 bedrooms, 39 bathrooms, and a gigantic 91-foot dining room. Other than this, the house has an in-house power plant, a basketball court, a bowling alley, squash and tennis courts as well as three swimming pools. Four Fairfield Pond also has a massive garage housing as many as 100 cars. 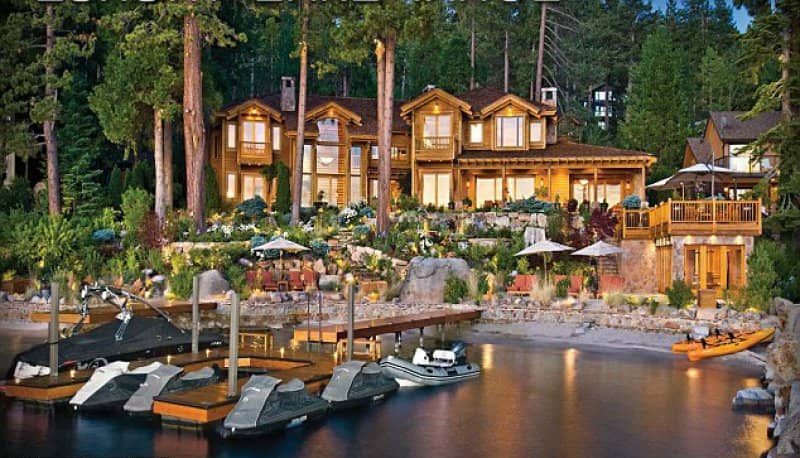 Owned by the co-founder of Oracle, Larry Ellison, this estate spreads over a whopping 23 acres and features 10 buildings. For the most part, the estate bears imprints of Japanese palace architecture. Priced at 200 Million USD, it is rightfully on our list of the most expensive houses in the world.

Designed by Paul Driscoll, an architect, and Zen Buddhist teacher, the estate comes with a man-made lake, an ethereal koi pond, a relaxing tea house, and a bathhouse. The estate also comes with some of the most expensive trees like cherry blossoms, maples, oaks, redwoods, and more.

However, it is not the most expensive purchase by Larry, as he spent fortunes on the Hawaiian Island of Lanai. It is structured like an immaculate lodge-like design, containing beautiful stone fireplaces, wooden pillars, and outstanding lake views. 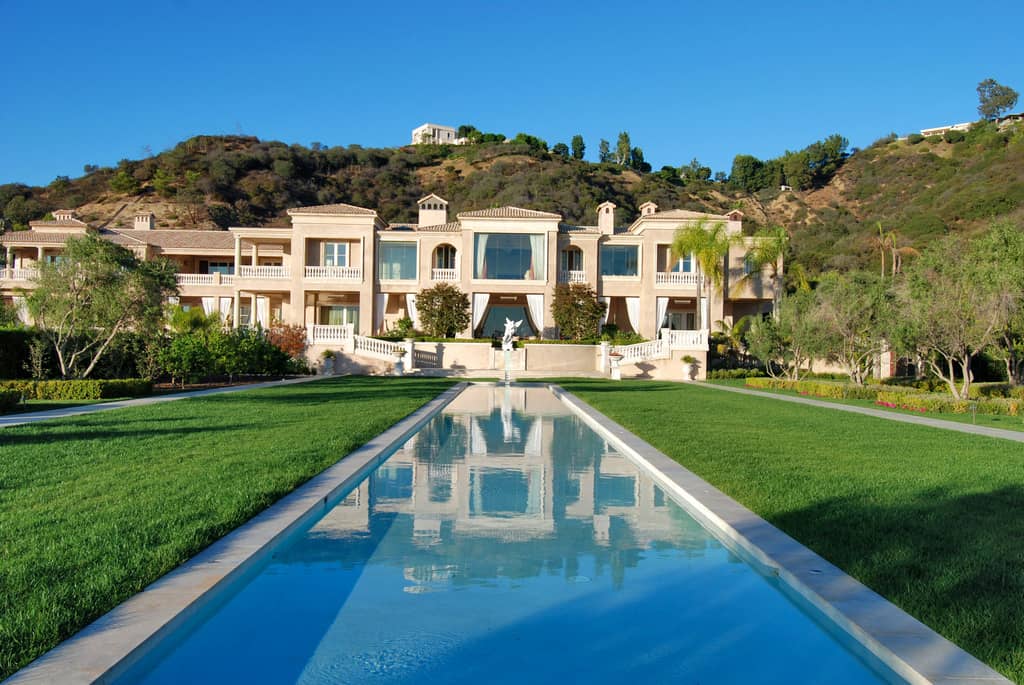 Owned by Jeff Greene, an American politician and a real-estate entrepreneur, this Mediterranean-style villa has a hefty price tag of 195 Million USD. It’s not just expensive but expansive as well, covering an area of about 53,000 sq. feet. This house is the magnificent creation of Alberto Pinto.

Nestled in Beverly Hills, the property comes with a dozen bedrooms, double the amount of bathrooms, multiple tennis courts and swimming pools, a theatre and wine cellar, a 27 car garage, and even waterfalls. The estate houses various smaller lodges within the property with each house having its very own theme and is no less than a holiday resort. It even consists of a revolving dance floor and a ballroom to party in style and luxury. 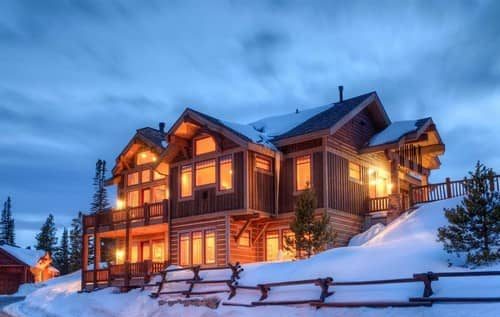 With an impressive market price of 155 Million USD, Seven The Pinnacle makes its way to our list of the 10 most expensive houses in the world. The property is under the ownership of Edra and Tim Blixseth, two renowned real estate developers and entrepreneurs. They label it as the largest property in the Yellowstone Club, a private ski and golf community exclusively for the super-rich.

Designed by Locati Architects, the house is designed and structured in a gorgeous lodge-like design. It comprises multiple floors, with a gym, a beautiful wine cellar, as well as a private ski-lift, and even heated floors. The location of the house exposes it to extreme winter weather. But that works in its favour, providing a vantage point for picturesque landscapes filled with both snow and greenery. 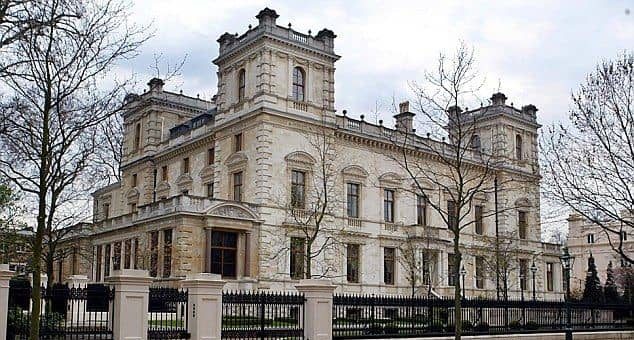 Designed by Philip Hardwick and priced at 128 Million USD, this humongous property is cradled in Billionaires Row, one of London’s posh areas. The property is under the ownership of Indian business magnate and billionaire Lakshmi Mittal, the Chairman and CEO of the world’s largest steel manufacturing company, ArcelorMittal.

The house was leased to a civil engineer, James Meadows Rendel for the first time making him it’s very first resident. As one of the most expensive houses in the world, the property has had many owners including the De Rothschild family, The Free Poles, David Khalili, and Bernie Ecclestone.

The property roughly spreads over 55,000 sq. feet and dates its history to the 19th century. Originally, both the properties consisted of two semi-detached houses that were later redesigned into a single and more grandiose structure by David Khalili. The house contains a dozen bedrooms, an indoor pool, Turkish baths, and a garage that could hold as many as 20 cars.

The properties also served as Egyptian and Russian embassies at some point in time. However, after their unification by David Khalili into one structure, they have been under private owners. 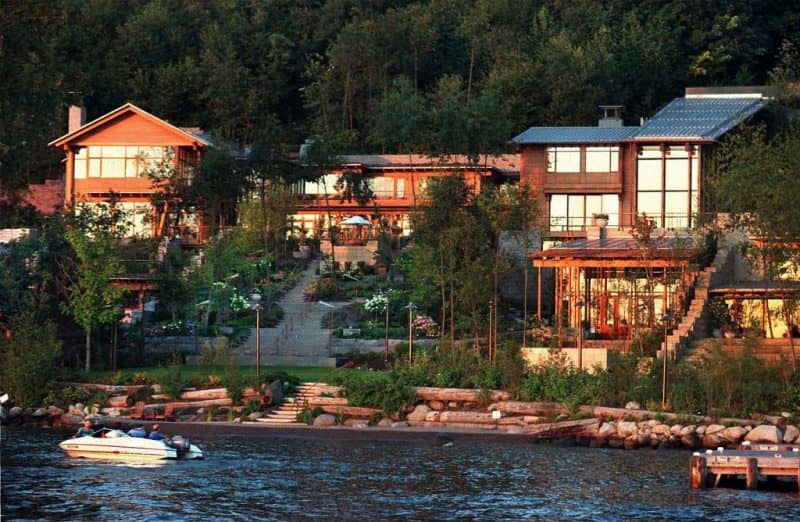 The ownership of this magnificent structure rests with one of the world’s richest men, Bill Gates, the co-founder of Microsoft. Spread across 66,000 sq. feet, this property took 7 years and a whopping 63 Million USD to build. The property is christened after Xanadu, to honour the fictional palace of the main character in Citizen Kane. The movie is based on the inability of a business magnate and billionaire to be happy with monetary possessions.

The house is built to regulate temperatures more aptly on the basis of its surroundings. It houses a 60-foot swimming pool located separately in a 3,900 sq. foot building. The house also has a 2,100 sq. food library with two secret bookcases, a dome roof, and a hidden bar. Unsurprisingly, the house is filled with various high-tech features and facilitates changing of artworks displayed as wall decor with the push of one button. It’s currently priced at 125 Million USD, placing it 10th on our list.

And, that is the list of the most expensive house in the world. Feel free to tell us which ones you found to be the most interesting. What should a house have for it to be perfect? For now, let the answer be ‘comfort’, hoping someday it can change to ‘luxury’.