Top places to visit in Delhi 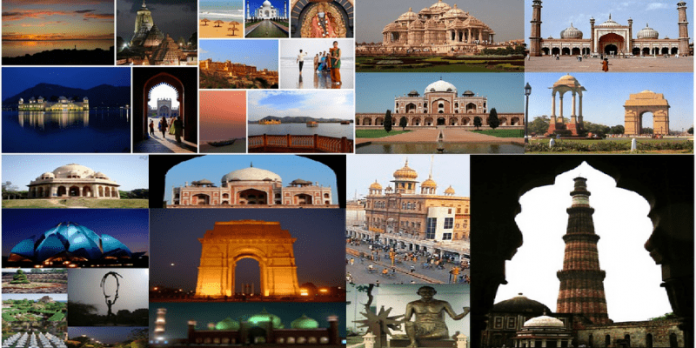 Delhi is a fascinating mix of history, culture, food, street life, and trade that enthralled tourists. The madness will overcome you at first, but as the city eventually peels away from its layers, you will discover that Delhi has a plethora of fun-filled attractions that will steal your breath away. If you have the desire and resources to explore Delhi, you will find plenty of interesting places to visit. Let’s see what all you can explore!

Top places to visit in Delhi 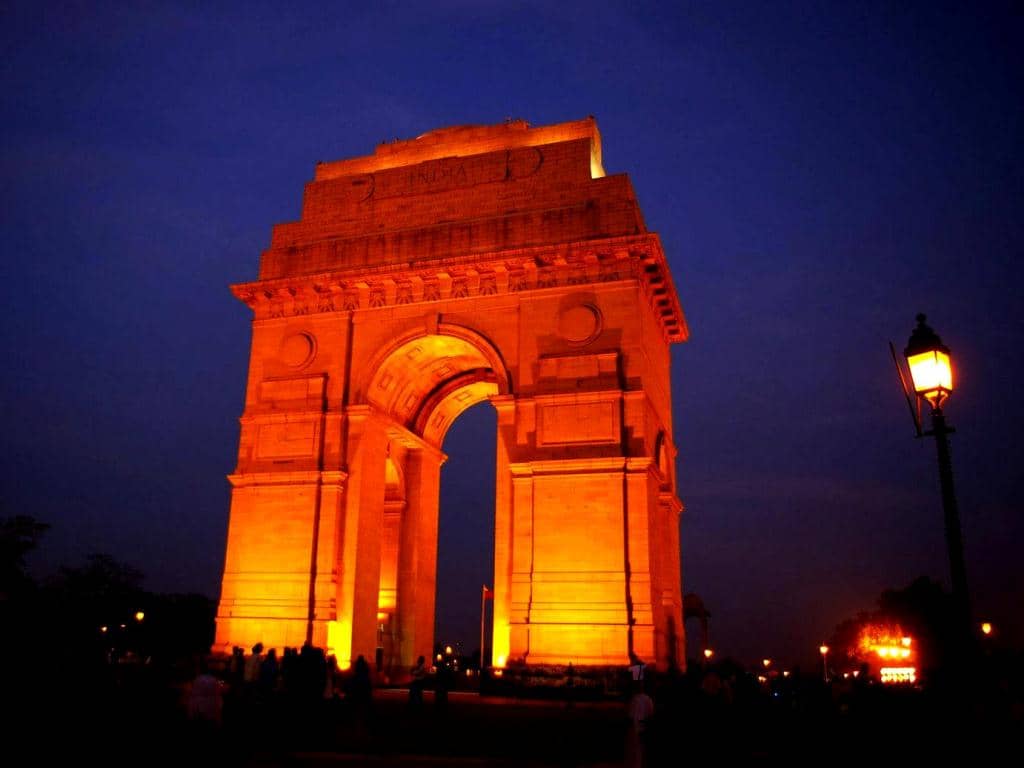 India Gate is a beautiful archway that stands as a memorial to the valiant soldiers who gave their lives for the country. It is one of Delhi’s most well-known landmarks. India Gate was originally known as the All-India War Memorial. It was designed to honor the 82,000 Indian Army soldiers who died in the First World War, which lasted from 1914 to 1921, and the Third Anglo-Afghan War. The war memorial is situated at Rajpath, where one can reach by getting down at Barakhamba Road Metro station in Delhi. On January 26th, the Republic Day Parade, also known as the India Gate Parade, is the most solemn and prestigious function held in front of India Gate. 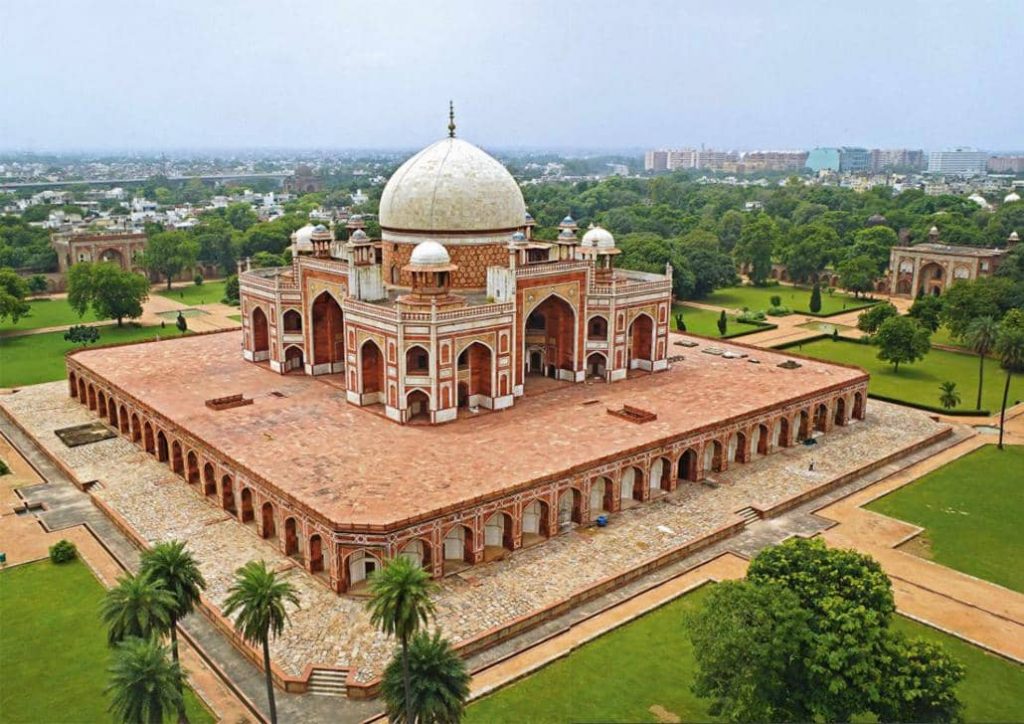 Located Opposite Dargah Nizamuddin, Mathura Road, The Humayun’s Tomb, also known as Maqbera e Humayun, is a significant historical site in India and one of the best places to visit in north Delhi. It is the tomb of Humayun, the legendary Mughal emperor of India, which was commissioned in 1569-70 by Humayun’s first wife, Empress Bega Begum, who was also the chief consort. From the main entrance to the West, several smaller monuments near the tomb, including one that was built before the main tomb. Khan Market Metro station is the nearest metro station, and it is the easiest way to reach the structure.

Timings: The tomb is open to tourists from sunrise to sunset every day, but the best time to go is between 8:00 a.m. and 6:00 p.m. 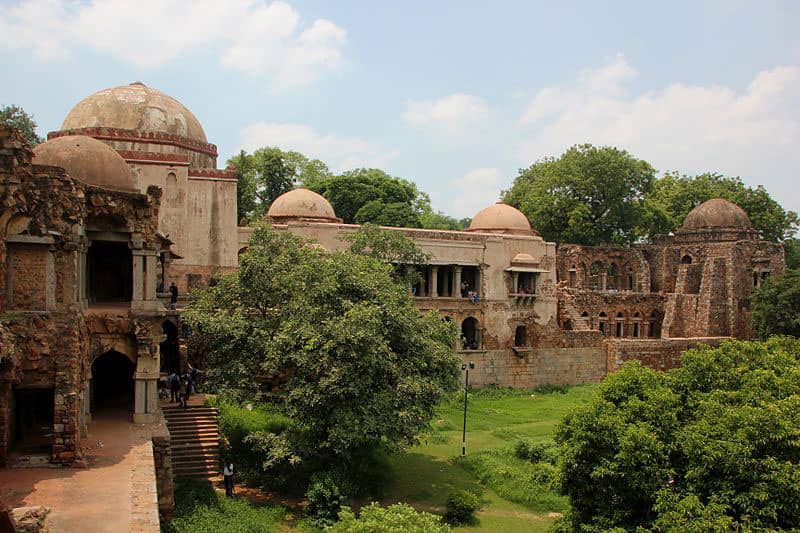 Hauz Khas is a lovely neighborhood in South Delhi and one of the city’s most popular tourist destinations. The historically significant Hauz Khas Complex is regarded as the heart of Hauz Khas. It’s also known as mehak ka Chota quila because it has a rural and urban environment. Green Park to the west and Gulmohar Park to the north surround the landmark. Hauz means “water tank” in Urdu, and Khas means “royal,” so it is referred to as the village’s royal tank. The yellow line of the Delhi Metro railway runs through Hauz Khas, and it is the most convenient way to get around the city. 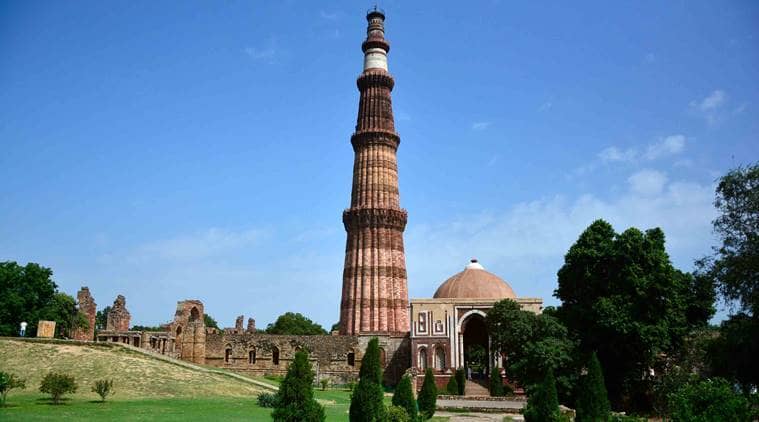 Qutub Minar, Delhi, is a valuable, protected structure in India that is considered a highly important historical attraction today in India. It is a part of the Qutub Complex, a UNESCO World Heritage Site and one of the most popular tourist attractions in north Delhi. The structure is located in Delhi’s Mehrauli neighborhood. Qutub Minar is a tower-like building made of red sandstone and marble that rises to 73 meters in height and has a diameter of 14.3 meters at the base and 2.7 meters at the top. It is advisable to reach as early as possible – the opening time is 7:00 AM as the complex will be less crowded.

Timings: The visit to the structure is restricted to the daytime between sunrise and sunset on all days. 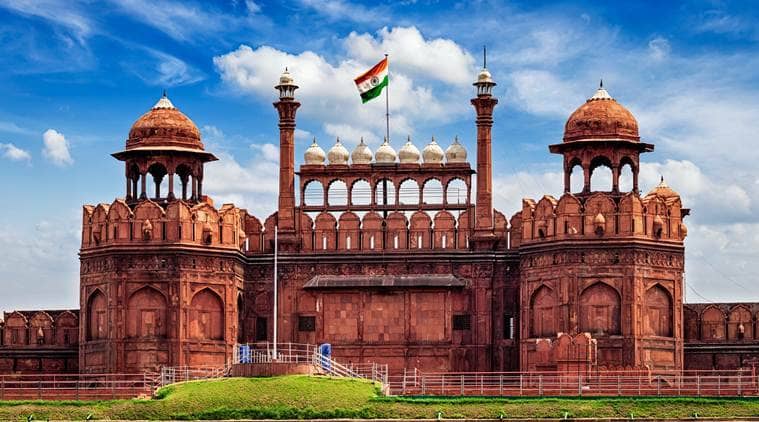 A historical fort in Delhi, Red Fort, is a brilliant architectural beauty that served as the Mughal emperors’ main residence for more than 200 years. Until 1857, the Mughal families resided there. The fort is a golden feather in Delhi’s crown, and it houses many museums as well. The architecture of the Red Fort is fascinating, with a massive walled citadel that shines in red sandstone. The fort took almost a decade to construct, and it was first seen in 1648. Every evening, for one hour, a spectacular display about the past of Red Fort and the capital Delhi is shown at the fort. The fort’s light and sound show begin at 6:00 p.m.Chawri Bazaar is the closest metro station to the Red Fort. 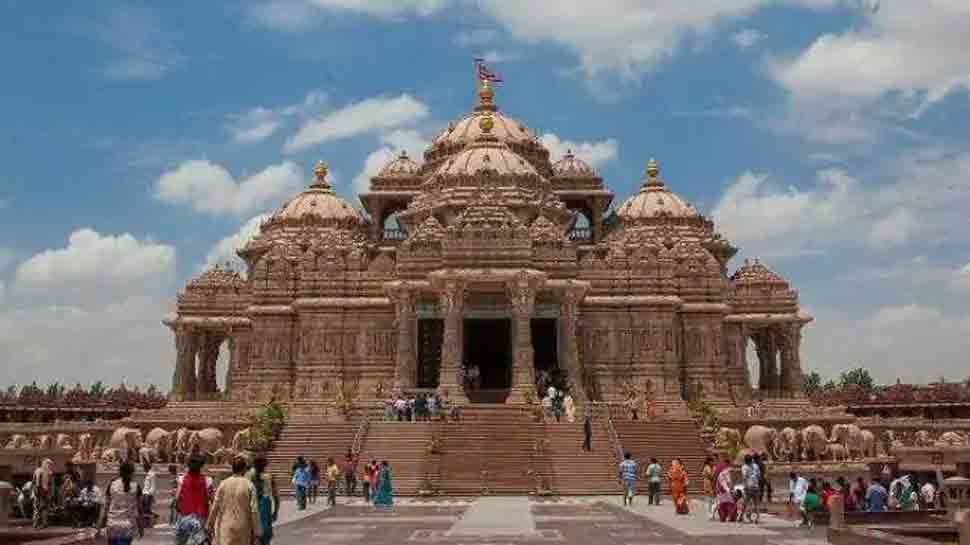 Akshardham Temple, also known as the Swaminarayan Akshardham Complex, is one of the most well-known temples in Delhi. The traditional Hindu and Indian culture, spirituality, and architecture are on display at this complex. Dr. APJ Abdul Kalam inaugurated the temple in 2005. The temple is 141 feet tall and 316 feet deep, according to architectural measurements. Its walls are carved with depictions of flora, fauna, singers, deities, and so on. It has a complex architectural design based on Maharishi Vastu principles. There are an Abhishek Mandap, Sahaj Anand Water Show, a theme-based garden, and three exhibitions like Sahajanand Darshan, Neelkanth Darshan Sanskruthi Darshan which is a cultural boat ride.

On Mondays, the temple will be closed. 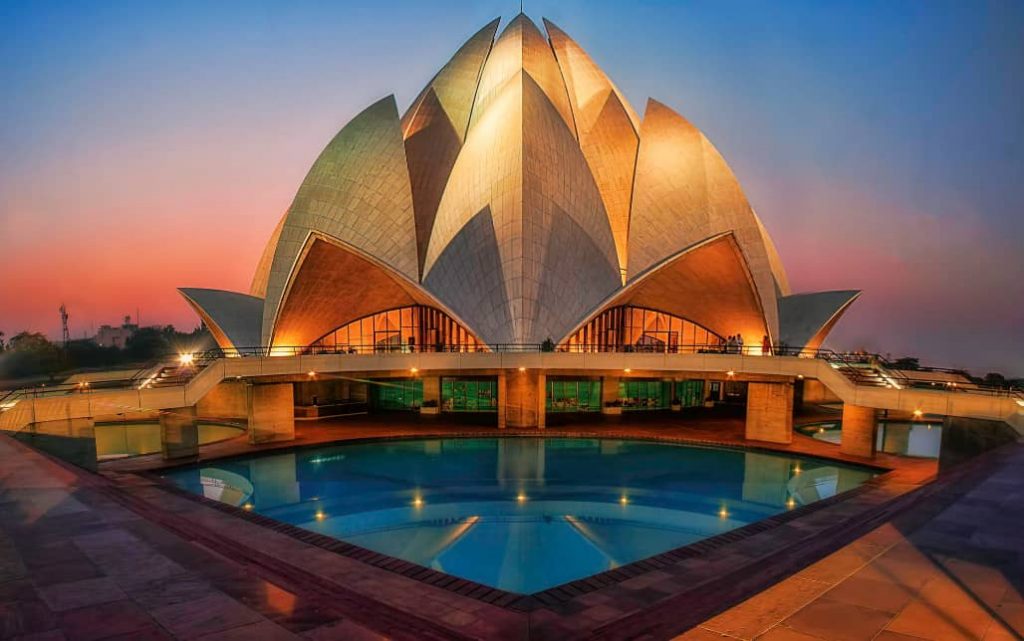 The Lotus Temple is a well-known tourist attraction in Delhi and a major Indian landmark that has attracted visitors from all over the world due to its architecture and beauty. It looks like a lotus flower, except it’s white in color. The structure is made up of 27 free-standing marble-clad petals that are arranged in three-petal clusters to form nine sides. The temple has a strong link to the Bahai Religion, which helps people to live in peace by having a shared place to worship. Though sacred writings of the Bahai Faith and other religions can be read or chanted, reading non-scriptural texts and conducting ritualistic rituals are prohibited, despite the fact that worship services follow a fixed pattern. The Lotus Temple is located near Nehru Palace and Kalkaji Mandir metro station. 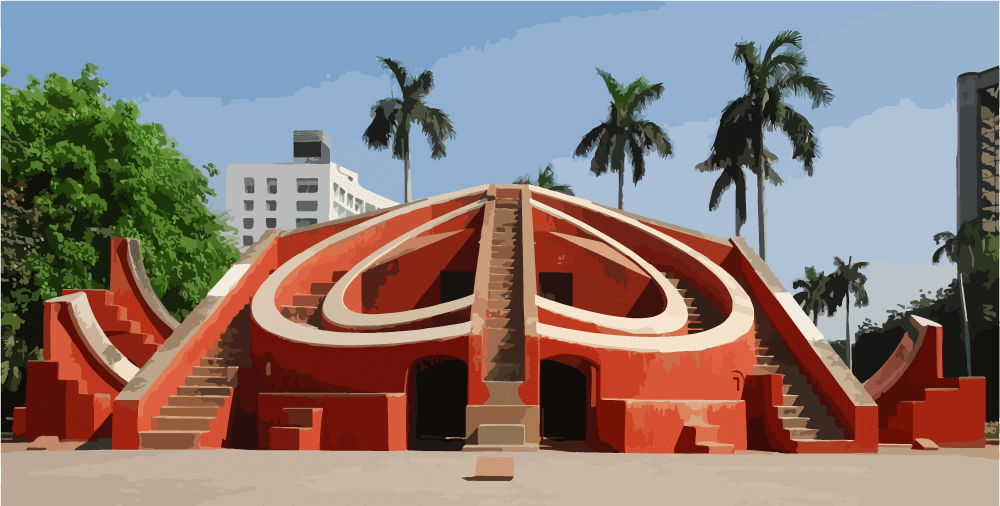 Among the five major Jantar Mantar built by Maharaja Jai Singh II of Jaipur, the one in Delhi has a reputation comparable to that of Jaipur. 13 architectural astronomy instruments can be found in Delhi Jantar Mantar. It was created to compile astronomical tables and predict the sun, moon, and planets’ passage and timings. The Observatory is located on Parliament Street in New Delhi, south of Connaught Circus. Near the property is a temple dedicated to Bhairava, designed by Maharaja Jai Singh II. 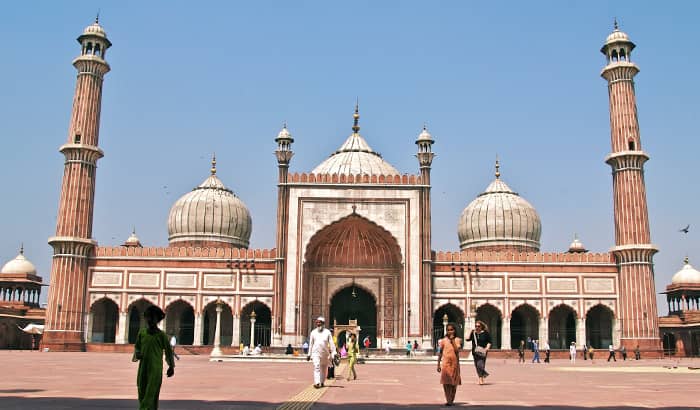 The residents of Delhi keep the Masjid-i Jahan Numa in high esteem and refer to it affectionately as the Jama Masjid of Delhi. It was built between 1644 and 1656 by Mughal Emperor Shah Jahan and is one of India’s largest mosques. Three wide gates and four towers guard the mosque. There are also two 40-meter-tall minarets made of red sandstone and white marble. The masjid was given life by Ustad Khalil’s architectural genius and is now preserved by the Delhi Waqf Board. Old Delhi railway station and ISBT Kashmere Gate are both within walking distance of the masjid. 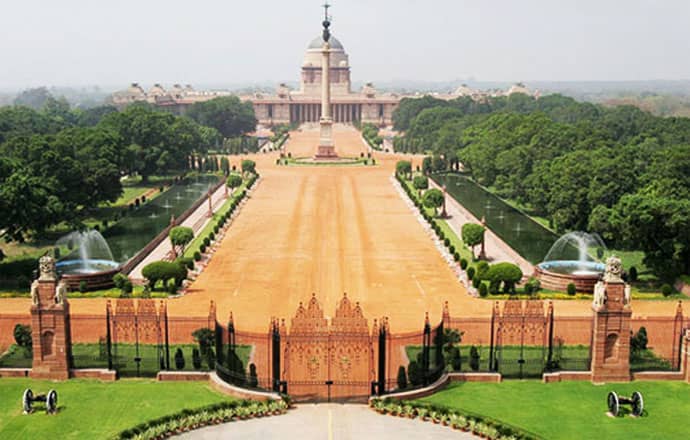 The Rashtrapati Bhavan in Delhi is the Presidential Residence, formerly known as the Viceroy’s House. Officially, it is the residence of India’s President. It is situated on Rajpath’s western end. The president’s official residence, corridors, guest quarters, and offices are all housed in the palace or main structure. The majority of the 130-hectare President Estate comprises massive gardens known as the Mughal Gardens, vast open fields, a residence for office workers and bodyguards, stables, and other structures. Edwardian Baroque influenced the building’s architecture. Citizens of India must have a legitimate photo ID card. International visitors should send their visit request along with photocopies of their original passports.

Timings: The mansion is open daily from 9:00 a.m. to 4:00 p.m., but the Mughal Garden and other gardens are only open on Friday, Saturday, and Sunday from August to March. 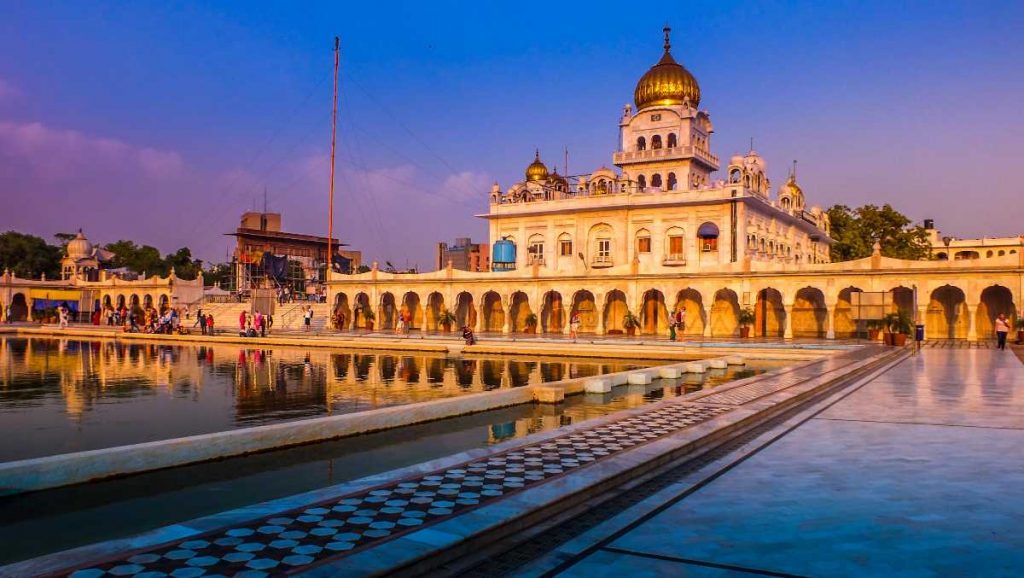 Gurudwara Bangla Sahib in Delhi is a well-known Sikh Gurudwara in India, known for its link to Guru Har Kishan, the eighth Sikh Guru. It started as a worship place for Sikhs, but it has since developed into a major pilgrimage and tourist attraction in Delhi. The golden dome and tall flagpole of Gurudwara Bangla Sahib, situated near Connaught Palace on Baba Kharak Singh Marg, makes it easily visible from afar. The langar principle is observed, and everyone, regardless of race or faith, is welcome to eat in the Gurudwara kitchen. Patel Chowk, Rajeev Chowk, and Shivaji Stadium Metro station are the major metro railway stations near the Gurudwara.

Timings: The Gurudwara is open every day for 24 hours. 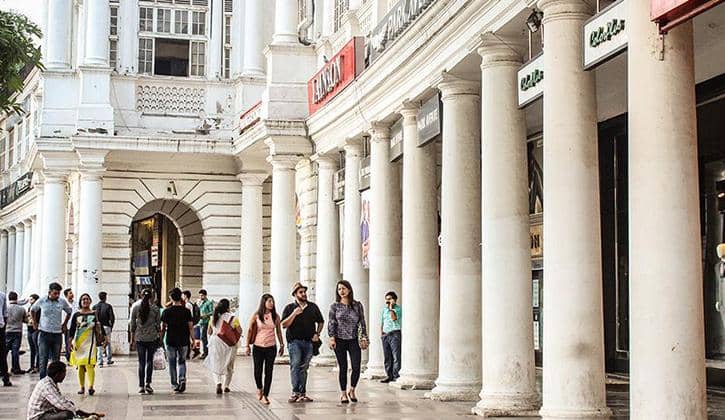 Connaught Place in Delhi, India’s largest financial, industrial, and business district, has seen the rise of numerous stores, markets, buildings, hotels, and significant structures. You will find great homestays in Delhi near Connaught Place if you want comfortable rooms and beds, delicious food, and modern and essential amenities. Prince Arthur, the first Duke of Connaught and Strathearn, was the inspiration for the name. Its construction began in 1929 and was completed in 1933. During the reign of the former colonizers, the site was regarded as a source of pride and was considered one of Delhi’s highest heritage structures.

Apart from these, the old lanes are lined with street food shops and stalls that will tantalize your taste buds with delectable dishes. Locals and visitors alike come here to have the time of their lives, not to mention the city’s most happening party hubs. The Delhi Metro, DTC, and privately-owned cluster buses, app-based cabs, auto-rickshaws, and cycle rickshaws are among the city’s public transportation options that will make your travel through the city much easier. Do share your experiences in the comment section below!