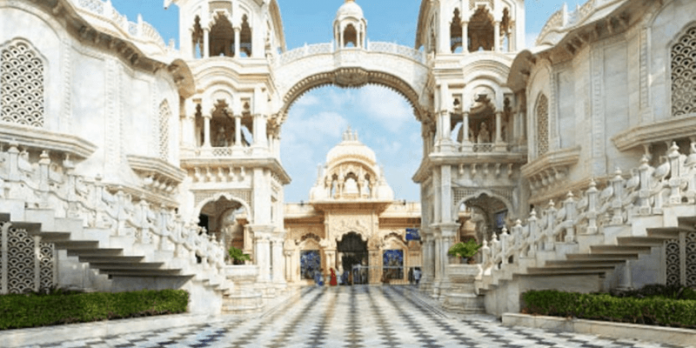 Vrindavan is one of the beautiful places located in the north Indian of Uttar Pradesh state. It is a little near to the capital city just 151 km from the south of Delhi. Its longitudinal and latitudinal distribution is 27°33¢ in the North to longitude 77°44¢ in the East. Also, it is very near to Mathura city, just 10 km. Mathura city has its own significance, it is famous for Lord Krishna, as it is said to be that he has spent his childhood. Talking to its location, Vrindavan is located on the New Delhi-Chennai and New Delhi-Mumbai main railway line. This route increases the access of more pilgrimages across it.

Now, coming to the origin of ‘Vrindavan’, it is said or known to be that the term Vrindavan is derived from ‘Vrinda’, which is one of the names of Goddess Tulsi (basil) plant. It is mythologically believed that the entire place has a Tulsi grove at one time. Another side story also tells that, Vrindavan comes after the name of Vrinda Devi, one of Krishna’s playmates. At the initial time period, Vrindavan was just a place for temples. Later it stretches to approximately 4,000 in numbers of Temples. This Temple includes different types such as several private shrines and sattras (houses for the distribution of alms) and all these are spread on a 10 km stretch.

It is believed that the earliest famous shrine in Vrindavan has been built by the local saint at a large garden called Nidhiban, and later was named Seva Kunj. This place is also becoming famous due to some historians, The Mugal Emperor Akbar was taken blindfolded inside the grove where he used to have some spiritual experience. Slowly it develops from the ancient era to the modern era in different forms. From the Historical events of Vrindavan, it is proven that Vrindavan is mainly famous for its religious events. There are a number of tourist attractions located near Vrindavan. In this article, you will come to know about some of the famous places. Such as the Pagal Baba Temple, this temple has its own significance. As the architecture of this temple includes eleven floors and it is one of the modern pieces of architecture.As the name of the Temple was named after the name of the temple’s creator, Pagal Baba, Who died only a few years ago. Another famous one is a Bankey Bihari Temple and Govind Dev Temple. For complete information related to places near Vrindavan, you can explore the sites. Coming to Vrindavan always took the long tour. And in this long-duration getting a best suitable hotel or places to stay sometimes becomes difficult mainly. When there is a crowd of pilgrims, Vrindavan is famous as a pilgrim’s hub. Getting a peaceful environment and pleasant atmosphere depends upon the location of the hotel. Here is the best hotel for everyone at all times.The first and best one is Vrinda palace Seva Dham, Hotel Baasera Brij Bhoomi and more. For more, you can just explore Duniyakagyan.com. It is the hub of varieties of sweets, here you can enjoy dozens of different types of sweets. Also, one can have a taste of 56 Bhog, in which there are 56 varieties of foods served. Apart from this, you can get Agra Ka Petha, which is India’s famous dish of Agra City.

In this article, we have tried to bring all the information altogether, which is much more sufficient for one who wants to travel or wants to go for a trip to Vrindavan. For more information, you can visit duniyakagyan.com.