10 Best Places to Visit in Rajasthan 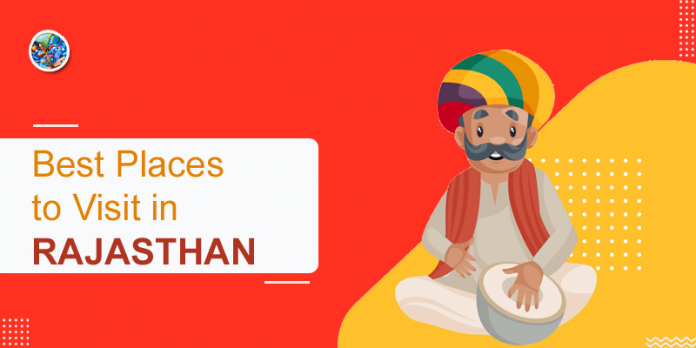 When you hear Rajasthan, the image of proud castles and forts standing in the middle of an arid land comes to mind. Come visit it and its history, spicy food, colorful culture, and incomparable beauty will leave you speechless. Add to it the amazing variety of places to visit in Rajasthan, it’s a must-visit for all types of tourists, from naturalists to adventure seekers.

Rajasthan has a simple etymology. It is made of Raja, which means King, and Sthan, which means place. As such, it translates to the King’s place. It is the land of Maharana Pratap who chose to live in exile rather than accepting the rule of Mughals. It’s the land of Prithviraj Chauhan, a fearless soldier, and a benevolent ruler. It is the land of Panna Dhai, who saved Udai Singh and created history. Now, it’s your turn to visit it and sing its praises.

10 Best Places To Visit In Rajasthan

No matter where you are in Rajasthan, there is a tourist attraction and a legend behind it. Experiencing such diversity isn’t possible on a short visit. So, knowing the best places to visit in Rajasthan is important. Here’s your rundown on what to visit when in this desert state. 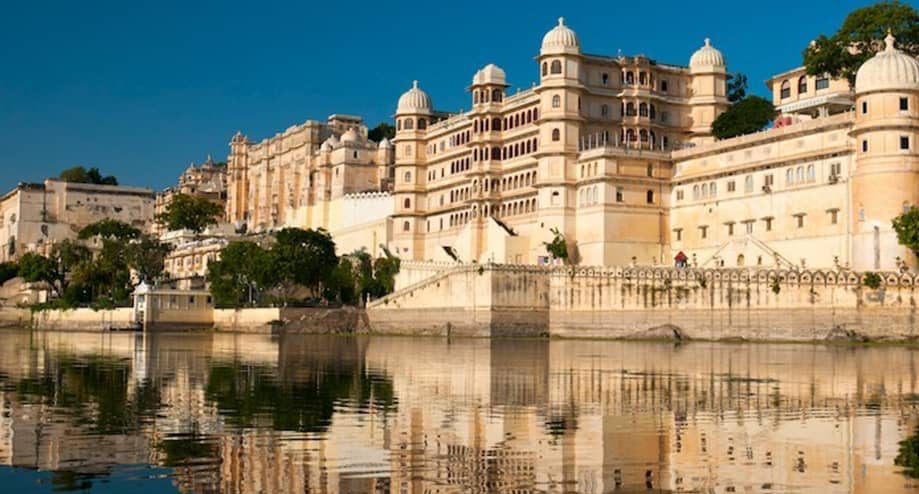 The city is named after King Udai Singh, who escaped a murder attempt as a kid. His governess, Panna Dhai sacrificed her son to protect the prince. Upon attaining adulthood, the prince returned to take the reins of the city. Udaipur was the capital of Sisodiya Rajputs, and the royal architecture greets you in every street and alley.

They call it the “City of Lakes” and “Venice Of The East.” The name is justified by the beautiful architecture and the lakes running alongside each other. Since the 16th century, this city has been a major Rajasthan tourist place for rulers and tourists who come here in abundance.

Situated on the foothills of Aravalli, this town is known for temples, museums, lakes, palaces, forts, markets, and its unique evenings. It is also popular for destination weddings. 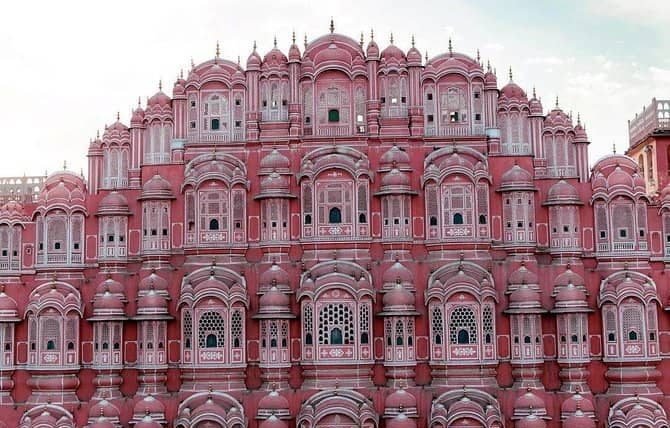 Jaipur showcases the feasibility of the Vedic Vastu Shastra as the city is designed as per traditional Indian architecture. The broad roads and well-planned streets have earned it the glory of the 7th best place to visit in Asia and the best city in Rajasthan. Jaipur is also the state capital.

Jaipur was built by Kachwaha Rajput King, Sawai Jai Singh II in 1727. It is known as “Pink City,” thanks to the pink and saffron buildings scattered all around. The highlight of the city is Hawa Mahal, whose architectural beauty will make you drop your jaw. Back in the day, the ladies of the Rajput family used this place to see life on the streets.

Also, the mahal is now UNESCO’s World Heritage Site. When you are in Jaipur, schedule an entire day to visit City Palace, a giant architectural masterpiece that takes so much time to explore and soak in all of its beauty. 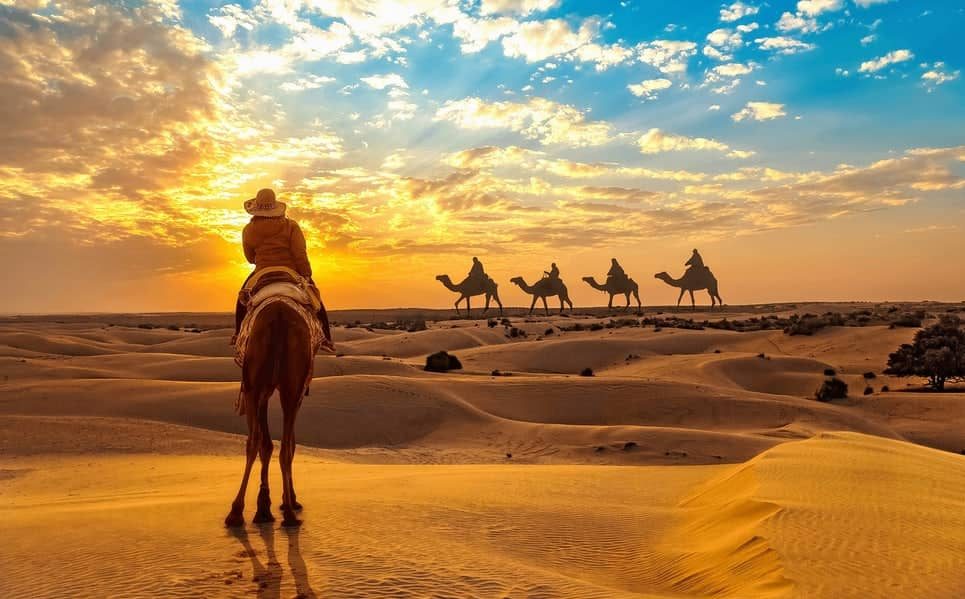 As you enter The Golden City, which is called so because of the yellow sandstone Havelis and forts, the proud Jaisalmer Fort welcomes you. At night, this imposing fort is a sight to behold. The fort was built in 1156, which means it is almost 900 years old, but its architectural beauty is intact. This fort is made of yellow sandstone and is built on the top of a hill.

Apart from Jaisalmer Fort, a camel safari in the expansive desert is something every visitor must experience. The city has numerous temples, Havelis, and forts that tell the glorious history of the place. Feel free to buy some souvenirs from the Jaisalmer Fort shops. The city was a walled city so that you would find shops, eateries, and even residences inside the fort. Tourism is its lifeline. 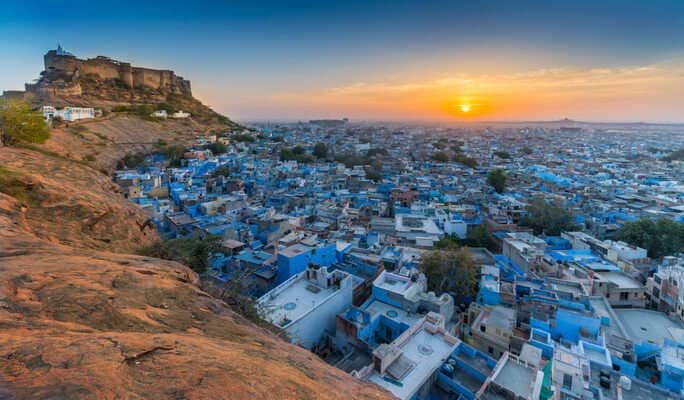 If you are visiting Jodhpur, plan it in a way so you can attend the annual Jodhpur Flamenco and Gypsy Festival. Organized in Mehrangarh Fort, the festival attracts folk artists and gypsy artists from around the world. This colorful festival is a sheer treat, and you will never forget it.

In terms of both population and area, Jodhpur is the second-largest city in Rajasthan. It is the gateway to the Thar desert. The city is home to the magnificent Mehrangarh Fort, known for its intricate architecture. Built-in the 15th century, it attracts a deluge of visitors day in and day out.

They also call it the “Blue City.” You will understand the logic behind its name if you see the view from the top. The city is brimming with blue-colored houses. There’s a lot to do and experience in Jaisalmer. Take a safari or a Flying Fox Tour to adore the mesmerizing landscapes. 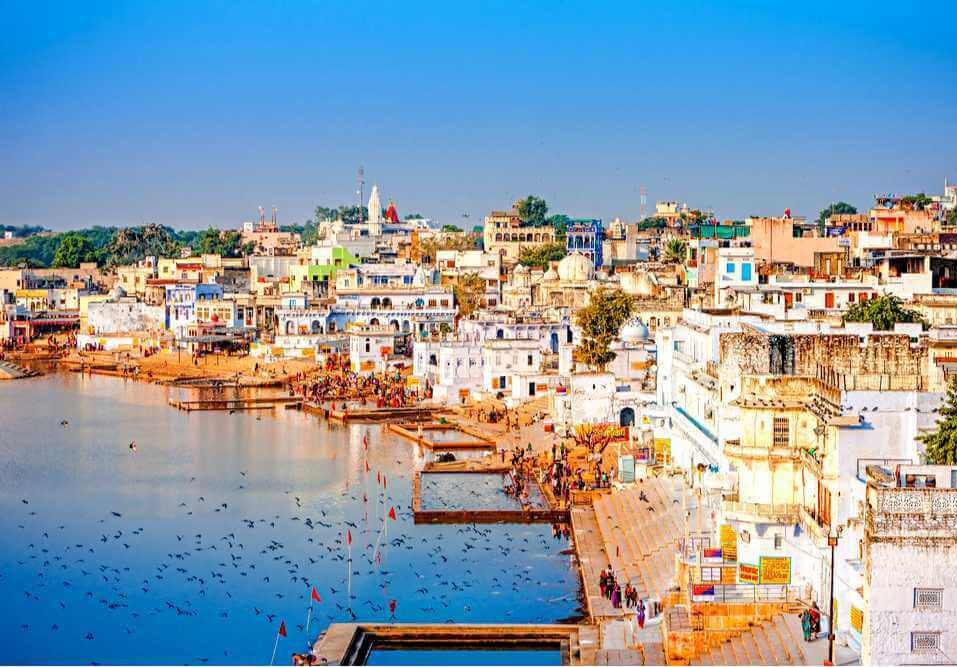 Home to the only Brahma Temple in the world, Pushkar has a great significance for Hindu pilgrims. There are several stories as to why Brahma is not worshipped and why his temple is not found anywhere else. A legend tells us, Lord Shiva cursed Lord Brahma for lying to him. In his fit of rage, Lord Shiva prohibited the worshipping of Lord Brahma but allowed it only in Pushkar.

According to other stories, Goddess Saraswati had cursed Brahma for marrying Gayatri to complete a yajna. Whatever the story, the fact is Lord Brahma is only found in Pushkar, and one cannot complete a Pushkar trip without taking a dip in the Pushkar Lake.

Apart from this, several other temples in Pushkar are worth a visit. The town is located near the city of Ajmer, and you must attend its Camel Fair, which is quite an experience with enthralling music, dance, events, and camel races. Shopping is something you will enjoy in Pushkar’s markets. 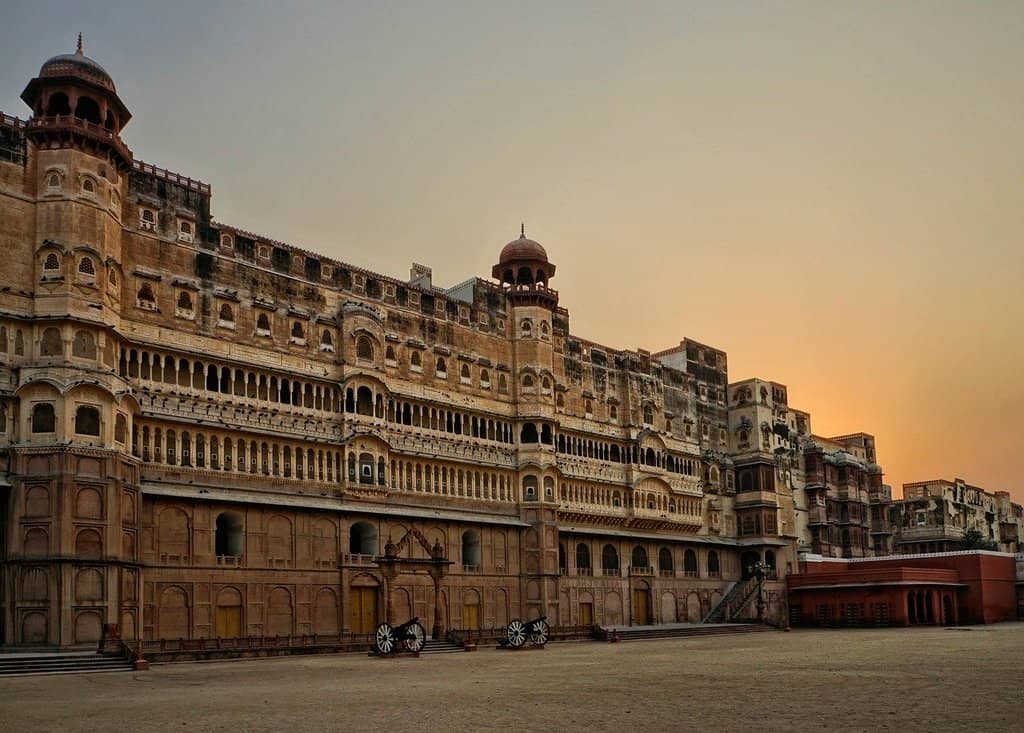 As one of the places to visit in Rajasthan, the city is known for its architecture and palatable food. Bikaner is located five hours from Jodhpur. It is a historical city founded in 1488 by Rao Bika, a Rathore Rajput Ruler. It is a walled city, and within these walls are found the tastiest foods of India. The local delicacy, Kesar Kulfi’s taste will never leave your mind. Tourists throng it during the camel festival in January.

Bikaner is a prominent city of Rajasthan and the proud owner of one of the two models accepted by the British during World War I. The city is called camel country because of its fascinating camel rides. Bikaner has its fair share of forts, Havelis, museums, and tourist attractions to boast about. It also houses the National Research Center On Camels. 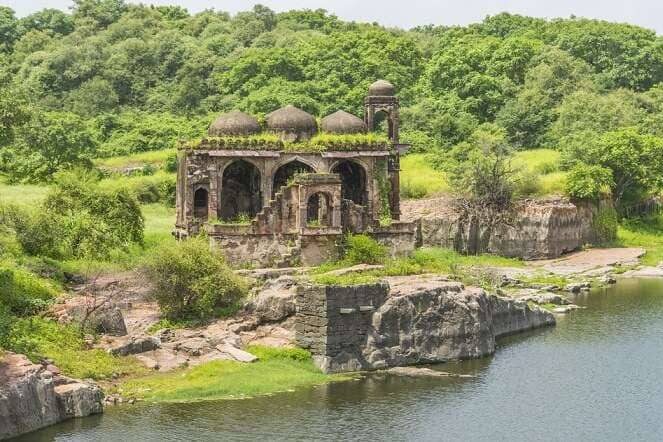 Sawai Madhopur is among the unique places to visit in Rajasthan. Every Indian knows about it and thousands of tourists flock to the city every year. The city was planned in 1765 AD by King Sawai Madho Singh, a Kachwaha Rajput. The city has been ruled by some prominent rulers like Akbar and Aurangzeb. The area was earlier called Ranthambore. 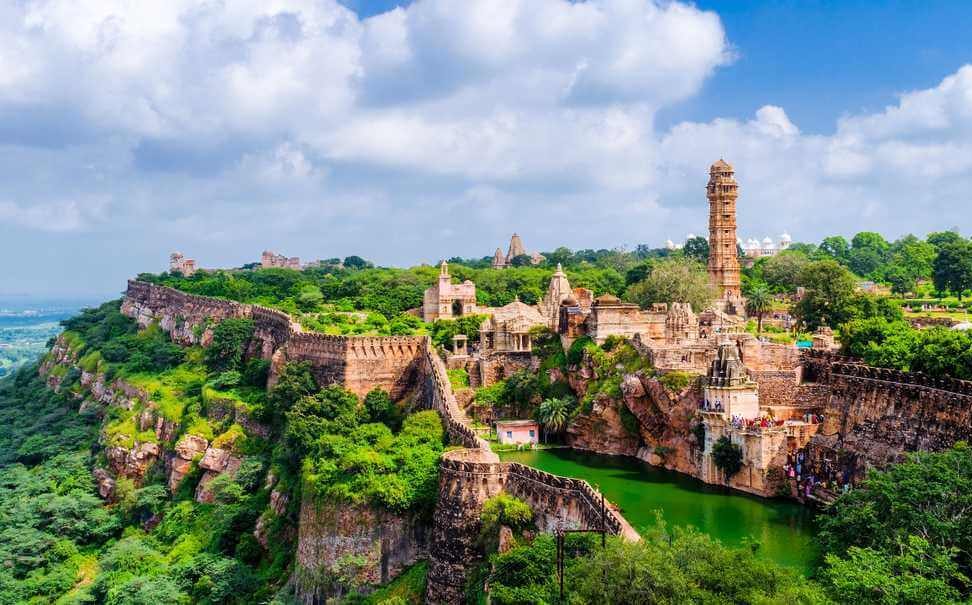 The main attraction of this place is the Chittorgarh Fort. Each brick of the fort is a witness of the attacks the fort walls have endured in a long, eventful history. It was Rana Kumbha who turned this city into what it is today. He was an architecture lover, who built the 30 forts scattered across the kingdom. The well-known Jauhar, which is a proud tale of bravery of Rajput women, was undertaken here.

In 1303, Alauddin Khilji heard about the beauty of the Rani Padmini of Chittor. He pleaded with King Rattan Singh to show her face to him only once. Rajput women were prohibited from revealing their faces, so he only saw a reflection of the queen and was enamored. He betrayed Rattan Singh and made him hostage. Rani Padmini tricked him, and with the help of a handful of warriors, freed Rattan Singh and returned to Chittor.

Enraged, Alauddin Khilji then attacked the fort. When Ratan Singh’s army was about to lose the battle, the women gathered adorning their best clothes and jewelry and surrendered their lives to the holy fire. The idea was to escape being hostages to the enemy. This tale is part of the local folklore. We even have a movie based on the incident. But when you visit the fort, you can experience the different events those walls have witnessed. 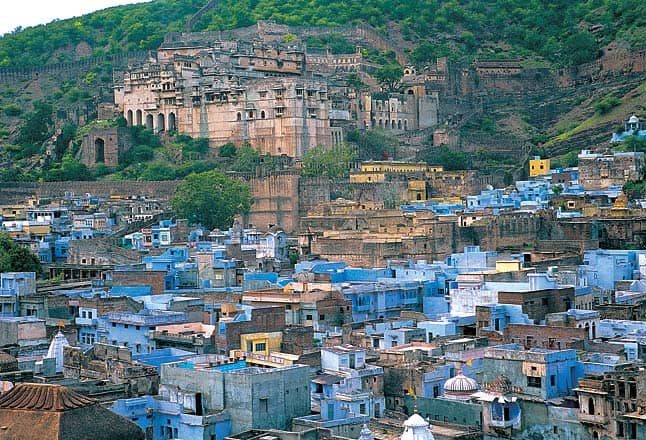 One of the leading tourist places in Rajasthan, Bundi is as sweet as Bundi (a dessert made from gram flour and dipped in sugar syrup). If you want to see the real Rajasthan, its culture, its colors, and its food, plan a visit to Bundi. It is a beautiful town only 36 kilometers from Kota.

Surrounded by various fruit trees, like guava, oranges, mangoes, and pomegranate near the Aravalli mountain range, this town has also attracted the renowned author Rudyard Kipling. The author famously remarked that Boundi is “a palace men build for themselves in an uneasy dream – the work of goblins rather than of men.” Such is the beauty of Bundi.

It was once the capital of the Hadoti Kingdom, which was ruled by Hada Chauhans. When Kota was separated in the 17th century, Bundi lost its significance. Dabhai Kund or the stepwell is one of the major attractions of Bundi. The city has a lot more to offer, making it one of Rajasthan’s famous places. 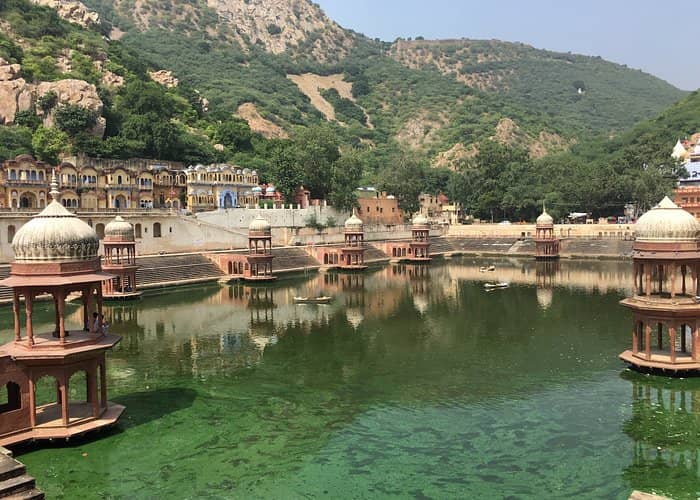 Alwar is the most historical city in Rajasthan whose history can be traced back to 1500 BC. However, the city we see today came into being only in the 18th century. Alwar is also among the first of the towns to sign a treaty with the British East India Company and became a princely state. The city has been a part of various battles. It also houses a variety of temples, places, and forts, making it one of the places to visit in Rajasthan.

There is City Palace, which lets you have a sneak peek into the rich culture and history of the city. The government museum also has a great treasure for history lovers as you can understand the grandeur of the royal lifestyle. It is just three hours away from Delhi. It is surrounded by the Aravalli Range. Sariska Tiger Reserve is a must-visit place here. The renowned haunted fort of Bhangarh is also situated nearby.

Rising from the sand dunes of the desert is a beautiful state, Rajasthan, which has been an integral part of India’s history. Its culture is unique, the food is mouth-watering, hospitality is mind-blowing, and places to visit in Rajasthan are just too many. If you are confused about Rajasthan places to visit, the above-mentioned list will be helpful.