Lotus Temple [The Bahai House of Worship] – History, Architectural Style & Things to Do 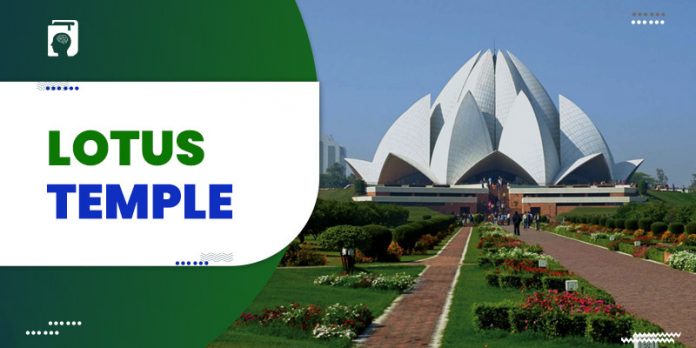 We invite you to visit the Lotus Temple in Delhi to discover divinity in a unique, assimilative way. There’s more to this temple than meets the eye. It epitomizes the Indian tradition of tolerance.

The Lotus Temple is one of Delhi’s most stunning and well-known tourist attractions. It was constructed in December 1986 as the center for Baha’i worship. The temple has a beautiful structure that resembles a lotus flower with a white petal-like form. The shape speaks for the name.

This gorgeous temple has a culture of worshipping one God, the Almighty. There are no restrictions on entry. Regardless of caste, color, or creed, everyone is welcome. It is one of the world’s seven Baha’i houses and an architectural marvel. It is the proud recipient of several prestigious architectural prizes over the years. It continues to be widely covered in magazines, newspapers, and television shows.

But how much do you know about this site? We are here to assist you with every detail you may have about the Lotus Temple in Delhi.

Things to Do at Lotus Temple: History, Architectural Style, and Activities

The Lotus Temple gets its name from its structure, which bears a striking resemblance to the Lotus flower. This structure is created in a captivating manner using 27 marble “petals”. These unattached petals are assembled into a cluster of three to create the nine-sided structure, each with an entrance. The interior flooring is made from white marble, and the insides of the petals are bush-hammered ceramic. The podium’s walkways and stairways are made of local red sandstone.

You can get through nine different doors that direct you to the hall’s central part. The hall is 34.3 meters high and can accommodate 2,500 visitors. Feel free to savor the beautiful views of the outdoors while standing in the hall. The premises are extensive, spread over 26 acres, with nine surrounding ponds and a beautiful garden featuring colorful flowers and grass.

The monument’s top appears to be open, but it actually holds a glass-and-steel roof that lets in bright sunlight. The overall effect is of a hovering lotus flower that is about to open and is encircled by its leaves. Effective ventilation and cooling systems are used throughout the building.

The Lotus Temple in Delhi is India’s most exquisite and one-of-a-kind architectural marvel. Constructed for the Baha’i Faith, the temple was the brainchild of a well-known Iranian architect, Fariborz Sahba. The structure was completed on November 13, 1986, and it was inaugurated on December 24, 1986. The public, on the other hand, was granted access to this location for the first time on January 1, 1987. It’s hard to believe that over 10,000 people came to see the place on its first day.

The Lotus Temple is more influential than the other tourist sites and cultural attractions in Delhi. For many years, people from all states, faiths, castes, and languages have flocked to this temple. The temple’s beauty and natural environment bring visitors serenity and happiness. It has won numerous architectural awards and has been extensively covered by newspapers and magazines the world over. The temple is the world’s most visited destination, and almost 70 million individuals visited it between 1987 and 2001.

In the below section, you will get to learn about the Lotus Temple’s architectural style. Architecture has been divided into numerous categories, including:

Like the other Bahai temples, the Lotus Temple incorporates the number nine into its design. It is present in a symmetrical fashion to achieve a delicate balance while exuding aesthetics. A dome with nine sides makes up the structure.

There are 27 concrete and marble petals subdivided into three sections. Nine of these are the hall’s entrances, which direct people inside the temple. The outermost 9 petals are evident in the shape of a flower. The inner 9 petals, on the other hand, have a dome-shaped interior that covers the top of the hall from the inside.

The Lotus Temple is modeled after the lotus flower, indicating its enormous popularity. This structure, which is significant in many Eastern and Indian faiths, depicts the symmetry and beauty of the flower. As a result, the lotus temple is a well-known architectural example of biomimicry.

The Lotus Temple is designed to look like a lotus flower, indicating its enormous popularity. This structure, which is significant in many Eastern and Indian religions, depicts the symmetry and beauty of the flower. As a result, the lotus temple has become a well-known architectural example of biomimicry.

Despite its captivating aspect, the architects have put forth enough effort to create a solid monument. The Lotus temple in Delhi is designed to resist any form of an earthquake. Each of the petals, which are made of concrete and marble, is sturdy. As a result, the temple has tremendous structural strength and can withstand any disaster.

Here are some fascinating facts about the Lotus Temple

There are certain fascinating facts about which many people are still unaware. We’ve compiled a precise list of intriguing facts about the Lotus Temple for you to consider:

If you decide to visit this charming Delhi monument, there are a few things you should know.

Except for Monday, all days are available for visiting. From October to March, the times are 9.30 am to 5.30 pm. However, from April to September, you can visit the temple from 9.30 am to 7.00 pm sharp.

The Kalkaji Metro Station is the closest to the Lotus Temple.

Due to its location in a posh neighborhood, you can visit nearby restaurants that serve delicious food. Taking a stroll around this architectural wonder for a day will ultimately make you hungry. So, here is a list of the best places where you can have tasty food and drinks:

When you plan to visit the Lotus temple, you should have an idea of the things to explore there. Several things are available there to enjoy your visit. Here is the ultimate list:

However, we would like to remind you that photographs can only be taken outside the Lotus Temple. Please refer not to try your photography skills inside the temple.

These are the things we recommend you do when visiting one of the world’s most beautiful landmarks. The Lotus Temple provides a peaceful and tranquil setting for all visitors.

In this article, we have discussed the history, the architectural significance, and the worldwide popularity of the Lotus Temple. When you visit the Lotus Temple, make sure to see the other attractions nearby. There are several well-known tourist attractions in Delhi. Last but not least, remember that temples are sacred spaces; therefore, enter them with respect.