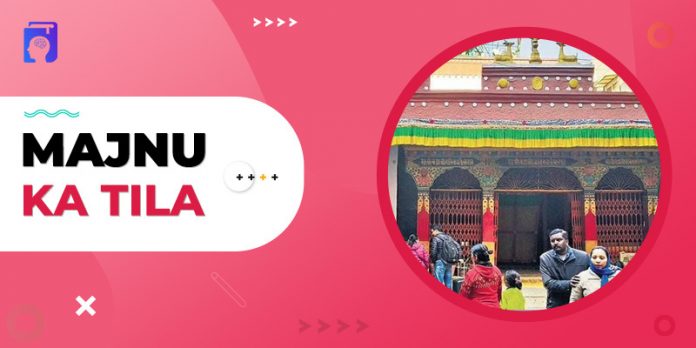 If the rapid speed of life in Delhi gets the better of you, take a break and wander through the twisting lanes of Majnu ka Teela, or Delhi’s Little Tibet. The place transports you into a whole new universe where things move at a leisurely pace. Its winding pathways conceal a plethora of Tibetan delights that will tantalize the senses and the imagination. Depending on your preferences, you may pick from a wide range of dining and drinking alternatives.

Where is Majnu Ka Tila Situated? 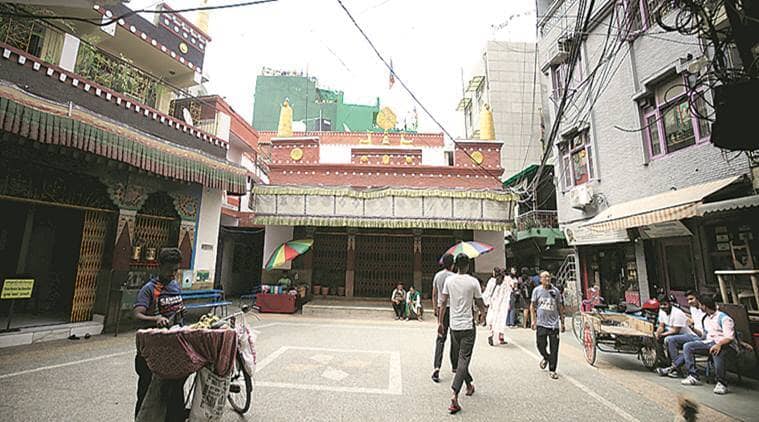 Majnu Ka Tilla Delhi is a famous tourist place situated near the ISBT Kashmere Gate terminal. A tiny but thriving Tibetan population, most of whom are refugees, lives here and runs their enterprises in this tiny bazaar. They’ve carved out a niche for themselves in the city, bringing a new cuisine and a distinct culture. We recommend visiting the region at least once, and we’ll show you how to accomplish the visit in a single day.

To get to the community’s entrance, follow the Tibetan prayer flags. You’ll arrive at an open courtyard with a temple via a short alley. A few vendors sit on the outskirts of this plaza, all selling La-phing, a popular Tibetan street dish. It’s a sort of flour-based flat noodle.

Baghel Singh Dhaliwal, a Sikh military commander, erected the Majnu ka Tilla Gurudwara to honor the visit of Guru Nanak Dev Ji in 1783 and Guru Hargobind Ji later on Emperor Jehangir’s invitation. Guru Nanak was so moved by the service of love-stricken Majnu seeking enlightenment that he declared that the region would be known as Majnu ka Tila until the end of time.

Later, the same name stuck with the gurdwara that was erected. The current marble gurudwara on the site was constructed in the 1980s. When Baghel Singh and 40,000 men stormed the Red Fort in March 1783 and captured the Diwan-e-am, he erected the first gurdwara within the complex.

Baghel Singh and the Mughal emperor Shah Alam II reached an agreement that allowed him to build gurdwaras on Sikh historical places in the city and earn six annas in a rupee (37.5%) of all octroi charges in the capital. With his forces stationed nearby in Subzi Mandi, the general chose seven places associated with the Sikh Gurus and had shrines built on them within eight months. 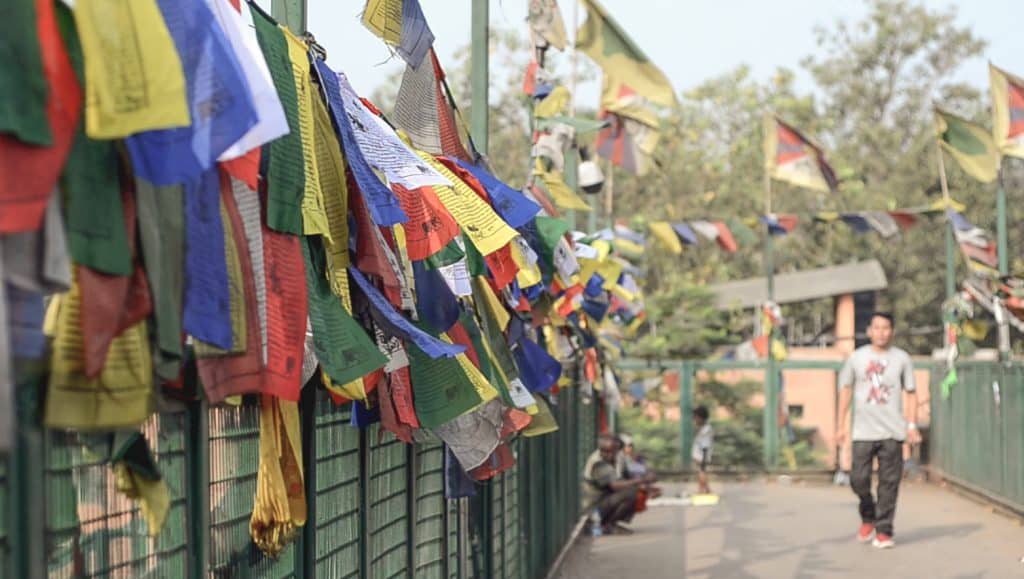 You can visit the place all around the year. The place is crowded with people, every season. But you can enjoy the best of the place in the winter. Plan a trip to the lanes and enjoy slurping on to some hot and sizzling momos or flat noodles from Dolma Aunty.

How to Reach Majnu Ka Tila?

Wondering how to reach Majnu Ka Tilla? Well, the nearest metro station to Majnu ka Tilla is the Vidhan Sabha Metro station. You will be able to reach the foot-over bridge that leads to the Aruna Nagar Colony Gate after a 5-minute vehicle trip (on the other side of the road). The filthy bridge stairs and the dark, tight passageways within the gate can make you quite uneasy. A glimpse of one of the oldest monasteries and a bustling courtyard a little farther down the alleyways will make you enjoy the trip to the place. 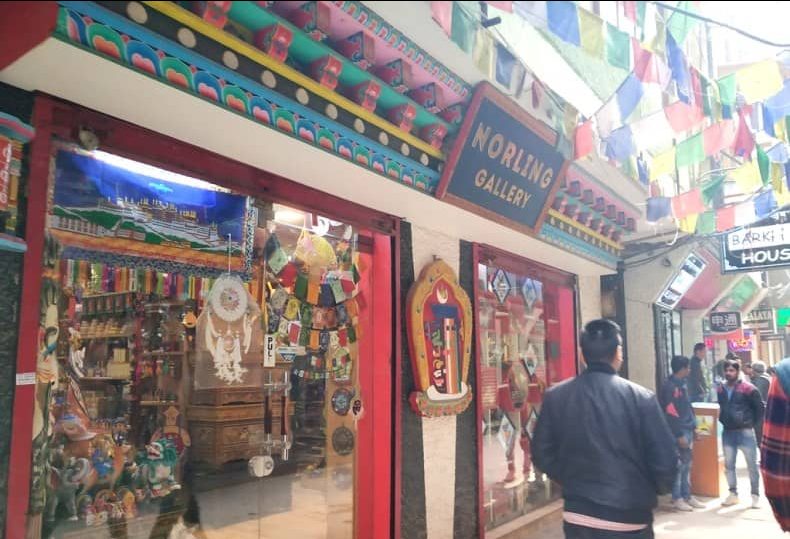 Majnu Ka Tila is a fascinating place where you have a lot to explore.

On the banks of the Yamuna River, the Gurdwara is nestled on a tiny mound. The Gurudwara has a long history. During his journey to Delhi, Guru Hargobind Sahib Ji (1595-1644 A.D.) stayed in Majnu Ka Tila. Guru Hari Rai Sahib Ji stayed here when he asked his son Ram Rai to give Aurangzeb a gist of his religion. The Gurudwara exudes a powerful and sublime aura, besides having religious connotations.

The Tibetan market of Majnu Ka Tila is the most well-known feature of the neighborhood. Everything Tibetan is sold at a variety of street stores. From Rs 300 upwards, you may get colorful shirts, flip flops, trousers, shoes, bags, and other fashion accessories.

Girls may fetch both real and imitation jewelry for a low price. Think of it as a wonderful destination to buy souvenirs, clothing, and accessories. Don’t forget to get Tibetan pop music and movie CDs as well.

Without a board or any sort of identification, you’ll discover this tiny treasure right near TCV Handicraft! Aside from the badass proprietor, the shop offers Tibetan language books, Buddhist Dharma books, Tibetan literature, and some English translations. It also has a few English-language titles, such as Diary of a Young Girl and The Little Prince.

5. Shop for good Bags and Clothes

Have you ever wondered where your fashionistas from college go shopping? Where do they acquire those very inexpensive clothes that are always on point? The solution can be found in this little but elegant store at the far end of Majnu Ka Tilla. Their current collection epitomizes Korean design with a budget-friendly price tag, and this notion alone is deserving of a medal! The clothing is imported directly from Bangkok (yeah!), and everything here is Instagram-worthy, from the outfits to the bags and accessories. 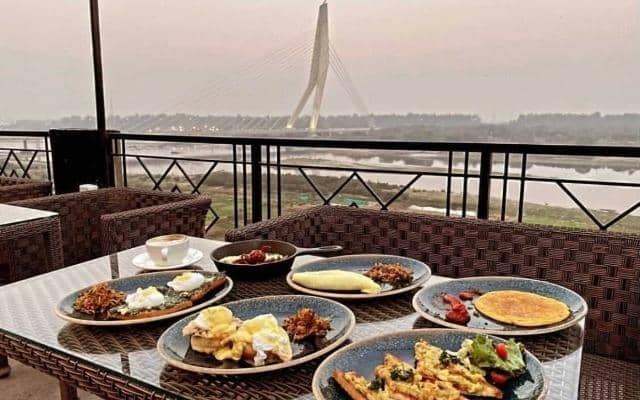 Majnu ka Tila food is as delectable as it gets. If you are looking for a great treat, then you must visit these 5 places to have a lip-smacking time:

The Coffee House is ideal for dessert and brunch. The banana muffins and mud cakes here are a foodie’s delight. They even offer pancakes before 11 a.m., and their sweets are made to order and fresh. They have a large selection of beverages as well.

Dolma House provides a plethora of alternatives just for you. With a unique seating configuration, this is a tiny yet cozy room in MKT that has a canteen-like atmosphere. The veg balls on a stick with Schezwan sauce and the Dolma Special Chow Mein are loved by all.

One of the greatest thukpas we’ve ever had is served here. This restaurant, which is not to be mistaken with Ama Café, is for people searching for a decent dinner in a well-kept environment in MKT. Although the service is sluggish and it is one of the few locations without Wi-Fi, the cuisine more than compensates for it.

Because it is on the major route, this one-and-a-half-year-old outlet can be easily located. This Majnu Ka Tila restaurant provides breakfast, coffee, Chinese, and Tibetan cuisine, making it one of MKT’s most diversified menus. It’s one of the handfuls of restaurants in the area to offer beer. Their cold coffee is excellent as well.

Koko is another wonderful location to have delicious Tibetan food. Great thukpa, pig dishes, and buff dishes can be found here. They also provide tasty drinks to complement the cuisine, such as relaxing peach teas, lemon tea, and Tibetan tea.

This was all about Majnu Ka Tila. It is a lovely place to visit when you are in Delhi. Though not a very big place, the peaceful lanes will make you fall in love with them. If you want a taste of Tibet without having to leave Delhi, Majnu Ka Tila is the place to go. You will be immediately transported to Tibet the moment you enter! The Tibetan music booming over the speakers, the Buddhist temple nearby, and the scent of food and incense lingering in the air all contribute to the impression. Even though Majnu Ka Tila is gaining prominence due to its closeness to Delhi University’s North Campus, we believe it is an under-appreciated treasure that you must see!