Red Fort: Overview, Nearby Places, Nearby Hotels & How To Reach 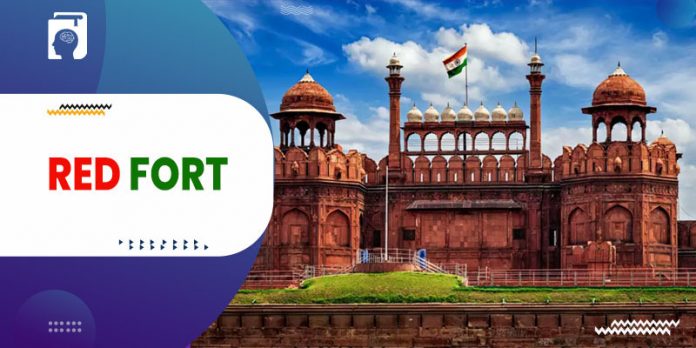 The Red Fort is a historical fortress, depicting the magnificence of a bygone era. It was built by Shah Jahan in 1639 when he shifted the capital from Agra to Delhi. Since then, it has been the seat of Mughal rulers who held sway over a major chunk of undivided India. In addition to housing the Mughal emperors and their families, it served as the Mughal state’s ceremonial and political center, as well as the site of major regional events.

Today, this monument is home to several museums that house a diverse collection of priceless antiquities. More importantly, the monument serves as a site for the Indian Prime Minister to hoist the national flag on Indian Independence Day annually. As a side note, the structure derives its name from the impenetrable red sandstone walls.

The Red Fort, also known as Quila-e-Mubarak or the Blessed Fort, is located on the Yamuna River’s banks, whose waters supply the fort’s moats. It was a component of Shahjahanabad, the ancient city that is now known as “Old Delhi.” In 2007, it was designated as a UNESCO World Heritage Site. For a long time, the Archaeological Survey of India was in charge of the monument’s protection and maintenance. In 2018, the Dalmia Bharat Group adopted the Red Fort as part of Prime Minister Narendra Modi’s “Adopt A Heritage” initiative.

A Brief Overview of Red Fort

The building of the Red Fort began on May 13, 1638, during the Muharram month. The fort took nine years to build and was finished on April 6, 1648, under Shahjahan’s supervision. The walls were an unusual asymmetrical structure, retaining the older Salimgarh Fort inside it.

It was the centre of Imperial Mughal rule till the Great Revolt of 1857. It includes many structures that were erected during Shah Jahan’s reign and those of succeeding monarchs. When his son and successor, Aurangzeb, ascended to the throne, following a bloody succession war, with his brothers, they erected the Pearl Mosque/Moti Masjid next to the fort.

After Aurungzeb’s reign ended, the fort began to deteriorate. Farrukhsiyar, a later king, substituted the silver ceiling with copper in 1712. The Persian Emperor Nadir Shah attacked Delhi in 1739 and plundered the Red Fort, taking the prized Peacock throne with him. Between 1739 and 1857, the Fort was seized, looted, and assaulted by Ahmad Shah, the British, Sikhs, and Marathas.

The Marathas sold the silver ceiling of Diwan-e-Khas in 1760 to raise funds for their forces’ defense against Ahmad Shah Durrani. For 200 years, the Fort served as the Mughal capital, but following the 1857 uprising, Bahadur Shah II, the last Mughal emperor, was exiled to Rangoon. He was the last Mughal resident of the fort and a symbol of the Shahjahanabad citizens’ 1857 uprising against the British.

The fort was attacked by British Colonial Rulers, who took several valuable items, including Bahadur Shah II’s crown, Shah Jahan’s Jade Wine Cup, and the Kohinoor diamond. Except for the white marble structures, they devised a plan to demolish the fort and were successful. When Lord Curzon was appointed Viceroy of India in 1899, he oversaw the building’s renovation as well as the restoration of the grounds.

There is little information about this place that can amuse anyone.

Why should you visit the Red Ford?

The Red Fort, or Lal Quila, has a history in India’s national development. On August 15, 1857, the Red Fort, or Lal Quila, was built., 1947, Jawahar Lal Nehru hoisted India’s national flag for the first time in history. Every year on that day, Lal Quila is the place where the flag is first hoisted. And that is the best reason why everyone who visits Delhi should come to see the Red Fort. But apart from being an important part of the national movement, the Red Fort also serves as a UNESCO World Heritage Site. And not to mention that it is also a Persian and Indo-Islamic architectural style.

The elegance of the Red Fort can only be enjoyed with bare eyes while you are standing still in front of the great architecture.

Now here is a fun fact about Lal Quila and why it is red: Shahjahan’s favorite colors were red and white, which inspired the color of the Quila itself. The Fort is made of red sandstone, which is the first thing you notice on arrival. As per 2019 before COVID, approximately 3 million domestic and 140,000 international travelers have visited the place. But due to lockdown phase 3, the place is currently not accepting that many visitors at once. But if you are exploring the world and want to see every magnificent thing that has been built over centuries, the Red Fort is hard to miss.

What is the right time to visit the Red Fort?

Summers in Delhi are quite hot, and it is best to avoid them if you are visiting the city. During the months of August and September, the monsoon season brings with it a high degree of humidity and good precipitation. The winter months might be foggy at times.

The months of October through March, i.e. during the fall and winter seasons, are ideal times for visiting. This is the best time to visit since the mild temperable makes the journey comfortable and enjoyable.

The Red Fort, a fusion of Indian, Persian, and Timurid architecture, was designed by Ustad Ahmad Lahauri, the architect of the Taj Mahal. The fort is octagonal in shape and has several gates, the most notable of which are the Lahori, Ajmeri, Kashmiri, Mori, Turkman, and Delhi gates. It is surrounded by a 2-kilometer-long wall. The Red Fort is made up of several structures. The most well-known are the Diwan-i-Aam, Diwan-i-Khaas, Moti Masjid, and Nahr-i-Behisht. The rectangular “Diwan-i-Am,” also known as the “Hall of Public Audience,” has three aisles and a nine-arched façade.

At one time, there were six marble palaces along the eastern lakefront at one time. The Nahr-i-Behisht (‘Stream of Paradise’) water channel runs through it, featuring an ivory fountain and a center marble basin. The Delhi Fort Museum is presently housed at the Mumtaz-Mahal. The Diwan-i-Khas (‘Hall of Private Audience’) is a pillared hall having a flat ceiling braced by engrailed arches. The Peacock Throne is supposed to have been stored here before Nadir Shah took it away.

The Hammam (‘bath’) is divided into three sections by corridors. The entire interior is made of marble with inlaid dyed stones. The Moti-Masjid (‘Pearl Mosque’), built later by Aurangzeb, is located to the west of the Hamman. Bahadur Shah II built the Zafar-Mahal, a red-stone pavilion in the center of the Hayat-Bakhsh-Bagh, in 1842.

The majority of these structures were adorned with expensive stones and exquisite floral motifs. The most notable features of the Red Fort’s design, which became synonymous with Shahjahani architecture, are the distinctive cusped arches and twin domes.

A Few Tips before you plan the day

You should remember a few things before visiting this place.

INR 80 for adults and INR 30 for children on weekends and public holidays.

There are awesome neighboring places for food like Asaram Foods, Fateh Ki Kachori, Ram Parshad Makhan Lal, ​Sardar Ji Meat Wale etc. If someone has time in hand he/she can visit The India Gate, the Qutub Minar, Jahanpanah Fort or the Humayun Tomb.

Best hotels to stay near the Red Ford

If you are visiting New Delhi and traveling to the Red Ford, there are some places you could stay: 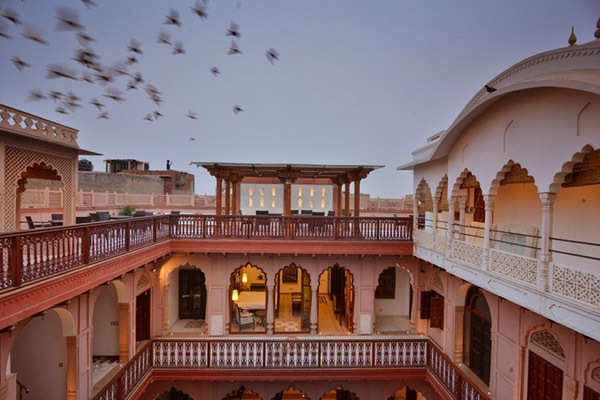 Haveli Dharampura is a UNESCO-award-winning boutique heritage hotel. The hotel received an award for its cultural and heritage restoration. Check out the amenities the hotel provides to the guests. 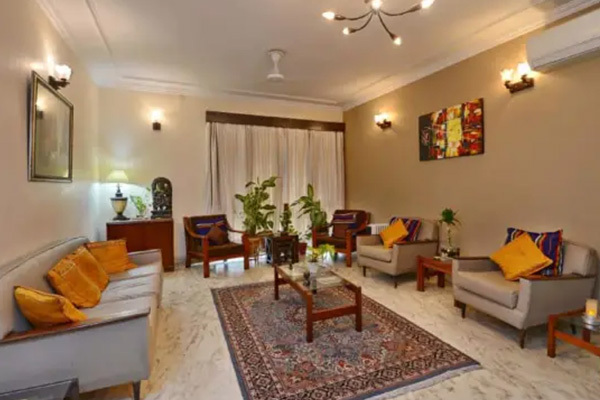 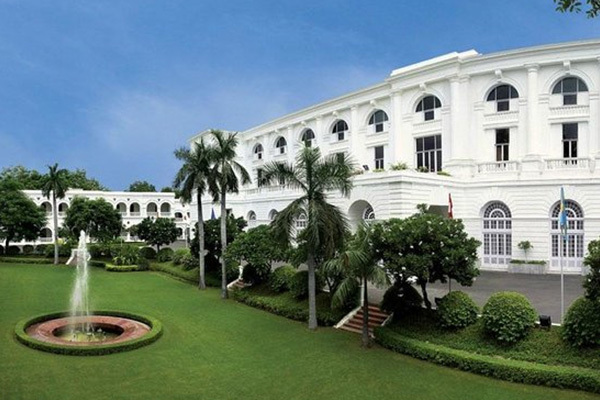 The Maidens Hotel New Delhi is a famous hotel in the town and is located 2.5 km away from the Chandni Chowk Market. 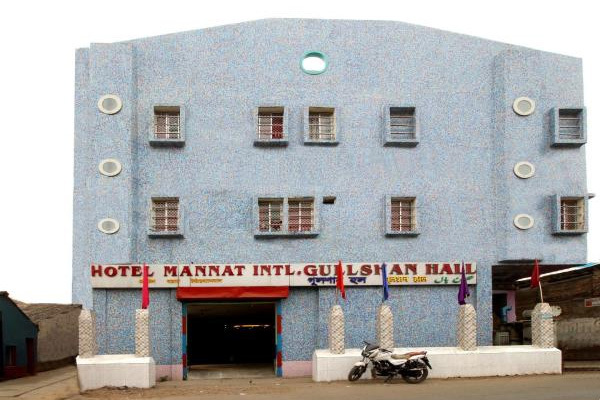 Hotel Mannat international is 2 km away from Jama Masjid and provides nice services such as air-conditioned rooms with free wifi, and more. 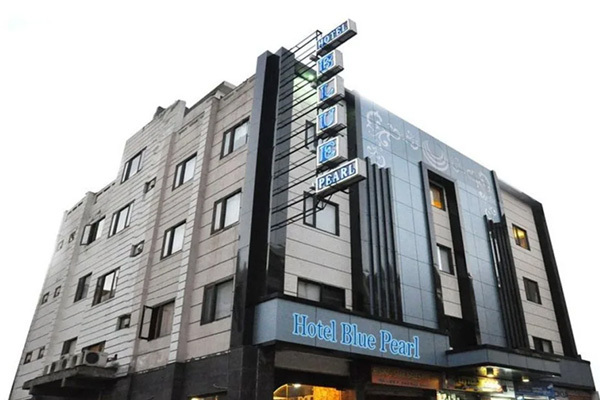 Hotel Blue Pearl is just 1 km away from Connaught Place. You can also reach it from India Gate or The New Delhi Railway Station.

If you want to stay in a more luxurious place with a little more budget, then a resort might be the best option. 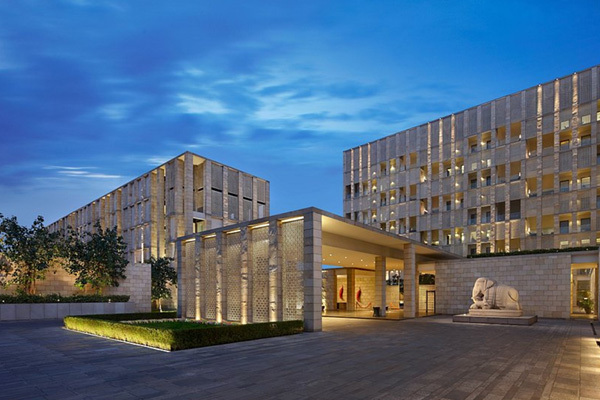 The Lodhi, located in New Delhi, has 48 rooms and suites with spacious balconies and stunning natural views. 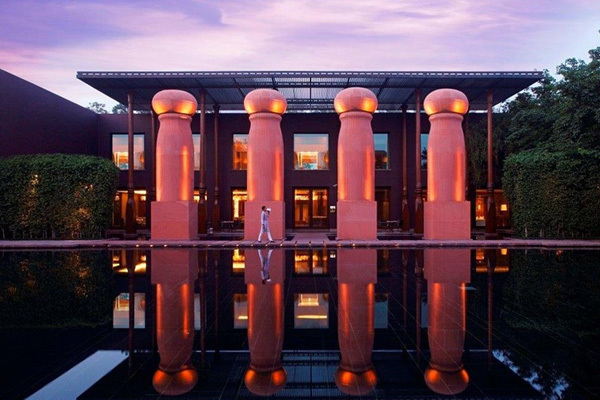 It is located at Nh-08 Samalkha, New Delhi. It offers cosy bedrooms, great hospitality, and dining options for just 12,713 per night. 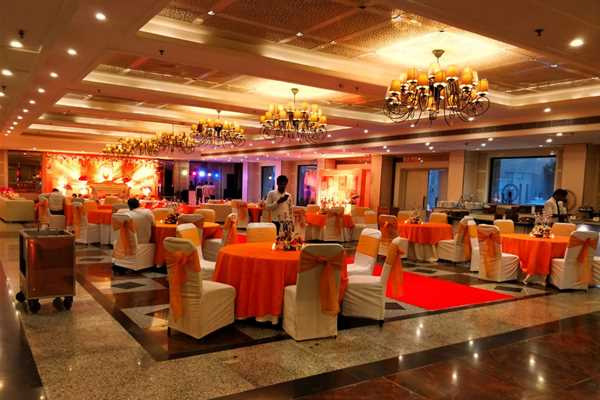 This one is both a hotel and a resort and is a pretty affordable option for anyone. It is located on Main G.T.Karnal Road, Jindpur, opposite of the Sai Baba Mandir in New Delhi. 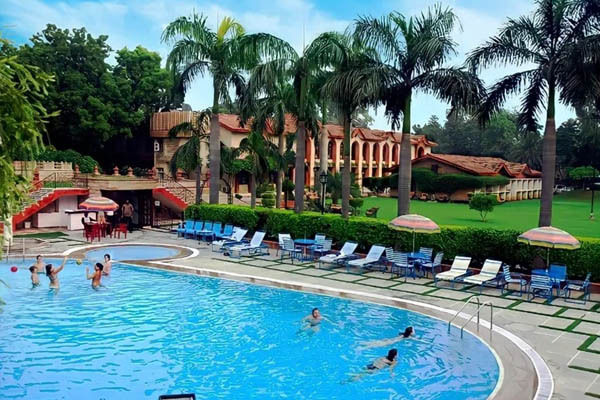 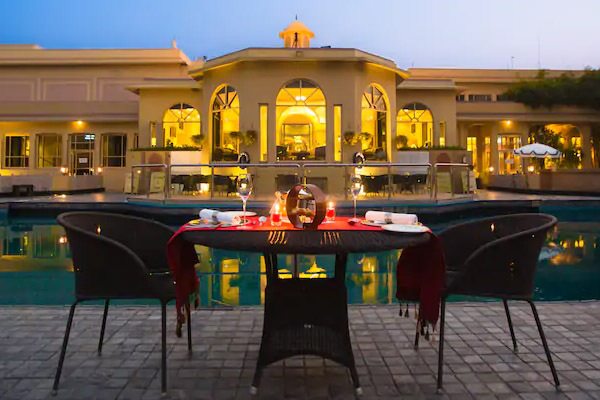 At a reasonable cost, Heritage Village Resort & Spa is situated at Nh 8, Manesar, with great facilities.

Things to do in Red Fort

Even if you are not a history buff, you will not be bored. There are a plethora of things that will delight you.

How to reach the Red Fort?

With its astounding structure, mysteriously attractive artwork, fascinating interiors, and illustrious history, this spectacular piece of architecture is a must-see for everyone at least once in their lives. Since Emperor Shah Jehan, the Red Fort has served as the seat of the Mughal Empire, symbolizing the strength of imperial Hindustan. With all of this, it truly is the soul and heart of Delhi. We hope that our article makes your visit more enjoyable and memorable.