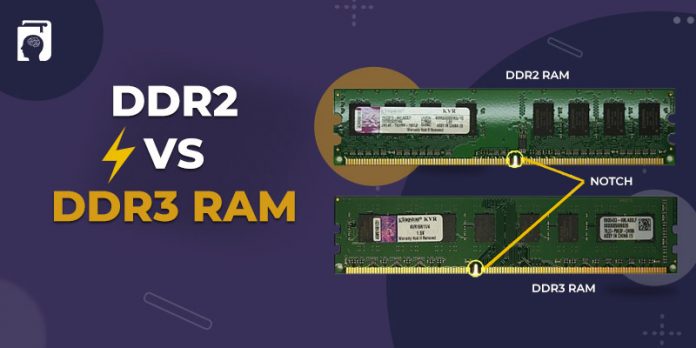 How do DDR2 vs DDR3 fare against each other? Well, let’s find out.

Working on two different generations of computers, you must have realized the difference in their execution of tasks, transferring rate of data, and the amount of information you were able to store in them. Ever wondered why your 2012 purchased computer functioned better than the 2004 one?

This was because of the difference in the installed RAMs (Random Access Memory) in both generations. DDR2 RAM was used in computers until 2007-08. Post that DDR3 RAM came in as an advanced and more efficient form of RAM for computers. They were better in every aspect compared to their predecessors.

Difference Between DDR2 and DDR3 RAM

In this article, we brief you on DDR2 and DDR3, along with their features, advantages, and disadvantages. We even elaborate on the difference between DDR2 and DDR3. By the end of this, you will have a better understanding of their capabilities and performance.

What is DDR2 RAM?

DDR2 exceeds DDR in about every segment. The data transfer rates were upgraded and set at a range of 400-1066MT/s. The voltage at which DDR2 consumes power is 1.8V. Lower voltage ensures less power consumption, which ultimately lowers the burden on the CPU. The DDR2 RAM sticks usually come with a standard 2GB storage but can be exceeded up to 4GB the most.

DDR2 is different in terms of design and structure from DDR. The modified structure allows the DDR2 more bandwidth, where more data is expected to flow through. The drawback, however, is that it is not compatible with DDR-installed computers as both DDRs are different in design.

Following are some salient features of DDR2, which will help you understand the difference between DDR2 and DDR3 RAM.

Let’s have a brief look at some pros of DDR2.

When it’s about DDR3 vs DDR2, knowing the disadvantages of DDR2 is vital.

What is DDR3 RAM?

By now, you know what is DDR2. So, let’s shift our focus to DDR3 to know the difference between DDR3 and DDR2. DDR3 is an abbreviation for “Double Data Rate Type 3.” It is a form of SDRAM used by the computer system to increase memory and speed up data transfer. With technology advancing at a jet speed, data storage has also progressed at about the same pace. To store large amounts of data and transfer them at a faster pace, newer, improved versions of DDRs have been regularly introduced at intervals.

DIMM (Dual In-line Memory Module) and SO-DIMM (small outline-DIMM) memory modules are the two types of memory modules available on the market. The former is utilized in desktop computers and the latter in laptops. DDR3 RAM is architecturally and structurally similar to its predecessor, DDR2 RAM. DDR3 RAM consumes 30% less energy than the earlier DDRs. DDR3 enhances the data transfer rate as well.

It also includes an improved level known as DDR3L, which has dual voltages of 1.5V and 1.35V. The higher voltage DDR3 is utilized in PCs and business servers, whereas the lower voltage DDR3 is used in smartphones, laptops, and tiny devices. The data transmission speed of a DDR3 RAM module is 64 times faster than the memory clock speed for modules of memory. That’s a prime difference between DDR2 RAM vs DDR3.

Let’s take a tour through the features of DDR3

Done with features? Now have a look at what makes DDR3 a better option.

The following points might make you rethink adopting DDR3. Also, you’ll get a clearer picture of DDR2 vs DDR3.

When all is said and done, it’s time to discuss what is the difference between DDR2 and DDR3. The DDR2 vs DDR3 difference can be summarized as follows.

Let’s summarise the DDR2 and DDR3 differences for a quick reference.

We are sure you must be clear in mind by now about the reason behind your 2012 purchased computer performing better than the 2004 purchased computer. When it comes to DDR2 vs DDR3, both were an updated, better version of their former ones. With technology transforming rapidly, DDRs are also coming with new generation types at regular intervals.

Share
Facebook
Twitter
WhatsApp
Linkedin
Previous article
Ukhimath – History, Hotels & Nearest Places to Visit
Next article
USB 2.0 vs 3.0: What’s the Difference and Which one is Better?