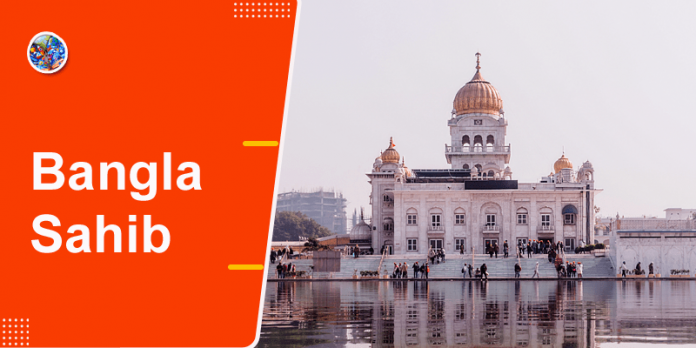 Description: Located in the heart of Delhi, Bangla Sahib is one of the most popular Sikh places of worship. This article will provide you with all the details about this shrine, including its significance, history, location, how to reach it, and nearby key attractions.

Delhi, as a multicultural metropolis, is home to a number of religious sites, including Gurudwara Bangla Sahib. For Hindus and Sikhs from all around Delhi and beyond, the Sikh shrine is a major draw. In 1783, Sardar Bhagel Singh created this monument to celebrate the advent of Guru Har Krishan, the seventh Sikh guru. When Mughal Emperor Shah Alam II ruled Delhi, nine Sikh temples were built in the same year under the direction of the Sikh General. The Gurudwara, which is open 24 hours a day, epitomizes the Sikhs’ generous nature. Every day, around a thousand worshipers visit the shrine.

How to reach Bangla Sahib Gurudwara

If you live outside Delhi, you can get to Gurudwara Bangla Sahib via air, rail, and bus.

By Air: With a modern airport, Delhi is served by all of the world’s major international airlines. The domestic terminal in Palam is 5 kilometers from the international terminal at Indira Gandhi International Airport, which is 23 kilometers southwest of Central Delhi. Upon arrival, you can take a taxi or a bus to reach Baba Sahib. Pre-paid taxi services and air-conditioned and non-air-conditioned coach counters are located outside.

By Bus: From all major cities in Himachal Pradesh, Punjab, Uttar Pradesh, Haryana, Madhya Pradesh, and Rajasthan, bus services are available to Delhi. DTC runs customized services from train stations to various sections of the city.

Local Transport: Take the blue line metro to Rajiv Chowk and exit at Rajiv Chowk. Use an auto-rickshaw to go to the Bangla Sahib Gurudwara in Delhi, which is 2.8 kilometers from the station. The Yellow line metro station at Patel Chowk is the closest. Gurudwara Bangla Sahib is 2 km away.

This attraction also has its own bus station, where you may get off and walk the remaining 1 km to your destination. The buses on the route are 410CL, 410, 930, 408, 378, and 340. One may hire a cab if the budget is not an issue. The shrine is situated on the Baba Kharak Singh Marg. It is close to Connaught Place in New Delhi.

Raja Jai Singh owned the land on which the Bangla Sahib Gurudwara now stands in the 17th century. It was known as Jaisinghpura Palace. During his visit to Delhi in 1664, Guru Har Krishan, the ninth Sikh Guru, stayed at the palace. As a result of unforeseen circumstances, cholera and smallpox outbreaks occurred in the region, killing large numbers of people.

Guru Har Krishan took it upon himself to bring fresh water from the well, which had healing properties, to the sick. It also cured the sick, according to Sikh literature. He, too, succumbed to the same sickness and died on March 30, 1664. Raja Jai Singh constructed a small tank atop the well’s waters, which is said to cure a variety of ailments today.

The Bangla Sahib Delhi is a stunning example of Sikh architecture, easily identifiable by the golden, gleaming dome and the towering, colossal flagpole, namely Nishan Sahib. The entire structure is made of exquisite white marble, with solid gold leaves covering the central dome. There are numerous smaller domes on the front wall and elaborate projected sculptures.

The Gurudwara’s grounds contain multiple structures, including a major prayer hall, a sacred lake, an art gallery, a museum, a library, a higher secondary school, a charitable hospital, and a communal kitchen. It even houses a “Yatri Niwas” (night stay) for exhausted pilgrims to help unwind and refresh themselves. The Gurudwara also has all of the necessary conveniences, such as toilets, air conditioning, parking lots, etc. Additionally, live Darbar Sahib transmission is available for devotees who cannot visit the shrine in person.

The museum includes four galleries with a total of 250 artworks and one tiny theatre that may accommodate up to 170 people at a time. It screens five-minute documentaries about Sikh gurus and soldiers. The idea is to promote the ideology and teachings of Sikhism. The museum attempts to emphasize the essential ideas of Sikhism using paintings, displays, digital technology, projections, murals, and multi-language sound. Sensors, films, and headphones recount stories of Sikh gurus’ lives and teachings.

When at Bangla Sahib, don’t forget to sample the “Kada Prasad” and free langar, or “community meal.” In fact, no one goes to bed hungry in Gurudwara. It features a langar hall wherein meals are served free to everyone, regardless of race, caste, gender, or religion. Feel free to serve the Almighty by volunteering in the langar kitchen, which is considered one of the most beneficial worship sessions at the shrine. In the langar, simple yet delicious lentils, rotis, and rice are offered. The Path and Shabads (holy chants) that last nearly 24 hours can make you feel at peace and connected with the almighty immediately.

The Gurudwara Bangla Sahib Delhi is colorful in several aspects. However, it comes alive during some important festivals.

Outside the Gurudwara Bangla Sahib premises, there are several snack (Chai-Pakoda) vendors. They provide a range of delectable fried treats with green chutney and onion, potatoes, spinach, and cauliflower.

Ram Ladoos are one of the other popular fried treats provided here. They’re fried right in front of your eyes, ensuring that they’re scorching hot. If you need something sweet, then jalebi can be a great option. Best of all, they are open 24 hours a day and are incredibly inexpensive.

Gurudwara Bangla Sahib is a religious place. Therefore, maintain some protocols as listed below.

Without a doubt, Gurudwara Bangla Sahib is a fantastic spot to visit in Delhi if you’re looking for a relaxing vacation, spiritual ambiance, and affordable short-term lodging. Its magnificence and tranquil surroundings will make your visit an unforgettable one.

This Gurudwara in Delhi is a living monument’s testimony, conserving its rich religious past while also continuing to establish a lasting legacy. Everything about the place is symbolic of human amalgamation. When visiting the Gurdwara Bangla Sahib, you may sense the Sikh community’s faith and friendliness and receive blessings. So, when are you visiting this place of spirituality and tranquillity?