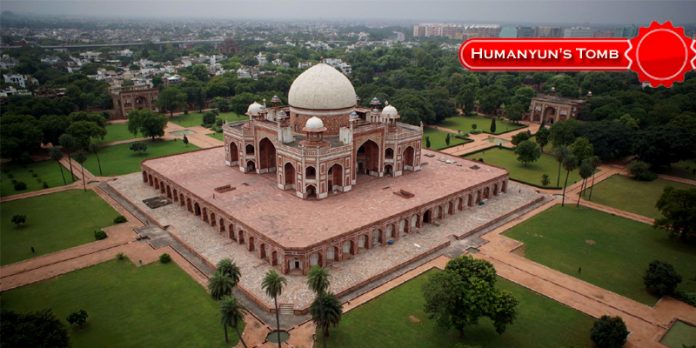 Delhi has a fair share of historical monuments that attract visitors from across the world. Most of the monuments are the brainchild of men. There are some built under women’s leadership though, you can count them on the fingers. Humayun Tomb is one of them.

Where is Humayun Tomb, you might wonder? Dedicated to Humayun, the second Emperor of the Mughal Dynasty, the tomb is in the Purana Quila area. It’s nestled between Lodhi Road and Mathura Road, on the east side of Nizamuddin. The memorial was erected years after the emperor passed away. In 1993, it attained the coveted status of a UNESCO World Heritage site. 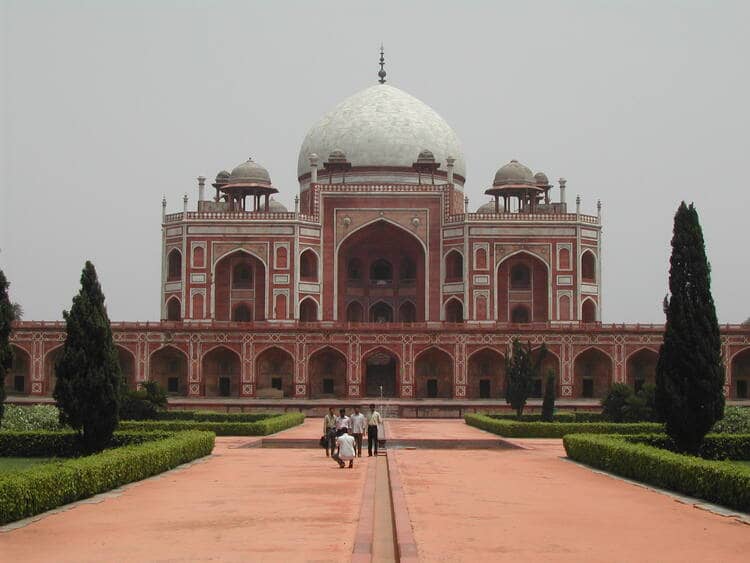 Wondering who built Humayun Tomb? Well, the credit goes to the emperor’s wife, Hamida Banu Begum. The construction went underway in 1565 and took 8 years to complete. Though the emperor’s wife commissioned it, the Humayun Tomb was built by the Persian architect Miraq Mirza Ghiyat. That’s why the architecture blends Persian and Indian styles.

Some mesmerizing gardens, fountains, and paths surround the Tomb. The Char Bagh Garden is the most notable of all. The Persian-style garden was South Asia’s first of its sort. Other Mughal kings’ tombs can be found nearby. There’s even a tomb of Nai Ka Gumbad, a royal barber. However, the tomb doesn’t have anyone’s name or message on it.

Humayun’s Tomb and many other tombs are attached to a common building complex. This includes Bu Halima’s Tomb, the Ila Khan Tomb and Mosque, the Afsarwala Tomb and Mosque, the Chilla Nizamuddin Auliya, and Ara’s Safari. Humayun’s wife, Hamida Begum, was also buried in the same Tomb. The other Bu Halima complex has a beautiful garden, which houses the Tomb of Bu Halima.

Construction on the structure began in 1565, lasted till 1572 and accounted for 15 lakh rupees. Devastated by her other half’s untimely demise, Bega Begum took it upon herself to create a resplendent memorial that would rival even the most prolific structure in the empire. Bega Begum oversaw the Tomb’s construction after returning from Mecca and performing the Hajj, according to the Ain-i-Akbari, a detailed 16th-century book compiled during Akbar’s reign. As a side note, Akbar was Humayun son and his successor to the throne.

Mirak Mirza Ghiyas, a Persian architect, designed the Tomb’s structure. He has designed numerous structures in Herat, Bukhara (now Uzbekistan), and other parts of India. Sadly, the architect passed away prior to the completion of the project. As such, his son, Sayyid Muhammad ibn Mirak Ghiyathuddin had it finished.

The magnificent interior of the central chamber was described by William Finch, an English trader who visited the Tomb in 1611. Rich carpets, a shamiana, a little tent over the grave covered in a pristine white sheet, and copies of the Quran with Humayun’s sword, turban, and shoes in front are all mentioned.

The Purana Qila, along with the Tomb of Humayun became a significant refugee camp for Muslims going to newly founded Pakistan during India’s partition in August 1947. It was later supervised by the Indian government. These camps were open for nearly five years, causing significant damage to the huge gardens and water channels, and infrastructure.

The mausoleum’s tombs were eventually walled in bricks to prevent damage. The Archaeological Survey of India (ASI) took over the conservation of cultural structures. The organization restored the building and its gardens in the following years. 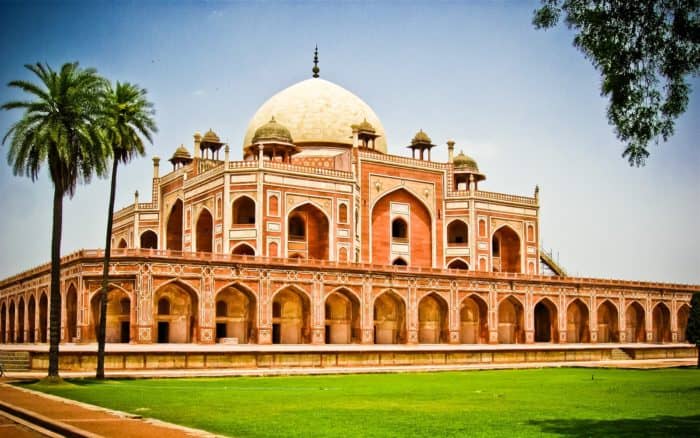 The Humayun Tomb architecture makes the monument such a big draw. It is housed in a structure in the center of a big Chahar bagh (a Persian-style gardening style). Mirak Mirza Qiyat adopted the Hasht Bihisht architectural style, which features a large central space surrounded by eight smaller rooms. The building is 47 meters high, 6 meters wide and with a floor space of 12,000 square meters. The brass ledge above the huge marble dome adds to the height and beauty of the tomb.

The building’s exterior is composed of granite with red sandstone and marble accents.

All four sides of the rectangular garden that surrounds the main structure have gates. The west gate is the most important of them all, allowing visitors to enter the main premises. You’ll come across rooms on the sides and upwards of the 16-meter-high entryway. The southern gate, however, was more important as it served as an entryway for the Mughal. That’s why they call it the Royal Gate. The garden’s canals are approximately 3 km long.

The importance of Char-Bagh is not overlooked in the description of the Tomb of Humayun. The garden has a perfect layout with square walkways and a touch of Persian architecture. This garden has four squares separated into little pathways, totaling 36 squares. A water body divides this garden into two sections. The three sides are stone-walled.

Other monuments at Humayun’s Tomb 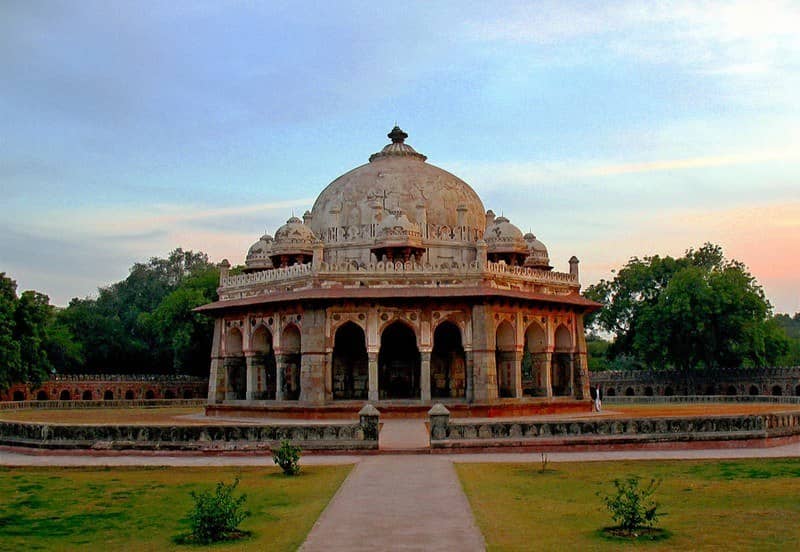 The Tomb of Isa Khan Niazi, a member of Sher Shah Suri’s lineage, is one of the most important monuments in Humayun’s Tomb. This tomb is older than Humayun’s Tomb, having been built in 1547 when Sher Shah’s son Islam Shah Suri was in power. Isa Khan’s Tomb is an octagonal structure. On the west side, where the Tomb is located, you will find a prayer hall. It is encircled by an octagonal garden, and was later used to bury Isa Khan’s family.

The entrance to the Humayun’s Tomb from the west is through Bu Halima Garden. Bu Halima’s Tomb, shaped like a loft, is located in the Bu Halima Garden’s northeast corner. Who Bu Halima was is unclear. She was either a member of an aristocratic family that lived in Delhi during the Mughal rule or a notable Arab woman who had intimate relations with the Mughals.

The Bu Halima Gate leads to the Arab Sarai Gate on the eastern side. The Arab Serai is the section of this gate that is within. The sculptors who traveled from Persia to construct Humayun’s Tomb lived in Arab Sera. The Arab Sarai Gate, adorned with sandstone and marble, is mostly composed of Delhi-sourced quartz stone.

Standing near the southwest end of Humayun’s mausoleum, the tomb is dedicated to an eponymous courtier of Akbar. This mausoleum is also in the mosque within the Arab Serai enclosure. Some archeologists believe that these structures were built between 1566 and 1567 CE. The word, officer is the direct translation of Afsar, thanks to Afsarwala.

5. The Tomb of the Barber

Around the main building of the Humayun’s Tomb Complex is a modest tomb in the southeastern corner of the Charbagh Garden. They call it the Barber’s Tomb. It was constructed in the late sixteenth century. The tombs of a man and a woman can be found inside. Although there is no evidence as to whose Tomb it is, the people assume it to be that of Humayun’s hairdresser.

Chilla Nizamuddin Auliya was to serve as the residence of Nizamuddin Auliya. As a side note, Chilla means shouting. You will find it just outside the premises. It is a coveted site flocked by devotees across religions, especially on Thursdays when qawali sessions are held here.

Blue Gumbad is a blue-domed monument near Humayun Tomb. The compound’s border is formed by a dome, often known as the “Nila Dome,” which adorns blue tiles. The fact that it is octagonal and a class from within is the most crucial feature of this one-of-a-kind edifice.

Other Tombs of the Mughals near the Humayun’s Tomb

Humayun’s Tomb welcomes approximately 2000 Indians and 350-400 foreign tourists on weekdays, and around 3000 Indians and 600-700 foreign tourists on weekends. The Qawali session at Hazrat Nizamuddin Aulliya, situated close to the monument, attracts a huge number of Muslim devotees on Thursdays. The seasons also play a part in determining the number of visitors. In the winter, there are more tourists than in the summer.

The entrance fee at the Humayun Tomb is 35 rupees for Indian visitors and those from the BIMSTEC and SAARC nations. Children under the age of 15 are admitted free of charge.

Humayun’s Tomb remains open on all days, even on public holidays.

How to Reach Humayun Tomb?

The distance between Nizamuddin railway station and Humayun’s Tomb is 2.8 kilometers. Taxis, buses, and auto-rickshaws are available outside the station. The bus station, which is around 8 kilometers away, is close to the Tomb Sarai Kale Khan. Outside the bus station, auto-rickshaws are readily available. Jawaharlal Nehru Metro Station is the closest violet line metro station.

Metro Line 2 connects Delhi Junction and New Delhi Railway Station, whereas Metro Line 3 connects Anand Vihar. Most trains to the south depart from Hazrat Nizamuddin, which also runs the majority of the services in Anand Vihar. No matter which station you land in, you can easily access taxis and buses to transport you to various parts of the city.

Indira Gandhi International Airport, near the city’s western borders, is the leading airport in the world. You can fly to IGI Airport to get to Humayun Tomb.

What is the Best Way to Get to Humayun’s Tomb?

All of the country’s major cities are connected to Delhi by road. In Delhi, you have multiple bus terminals, with Delhi Transport Corporation serving as the primary operator (DTC).

Who constructed Humayun’s Tomb and why?

Hamida Banu Begum constructed the tomb in honor of her deceased husband Humanyun. The majority of the work was done under her supervision.

How do I purchase tickets to Humayun’s Tomb through the internet?

To book a Humayun’s Tomb online ticket, go to an online monument booking site, look for Humayun’s Tomb, add it to your cart and complete the payment. You will then receive your verified ticket.

Which is the Best Time To Visit Humayun’s Tomb?

The summers in Delhi are extreme, with the mercury hitting 42 degrees, making it unsuitable for sightseeing. The temperature drops slightly during the monsoon, but the inclement weather can spoil your sightseeing plans. As such, the best time to visit Delhi is in the winter or spring.