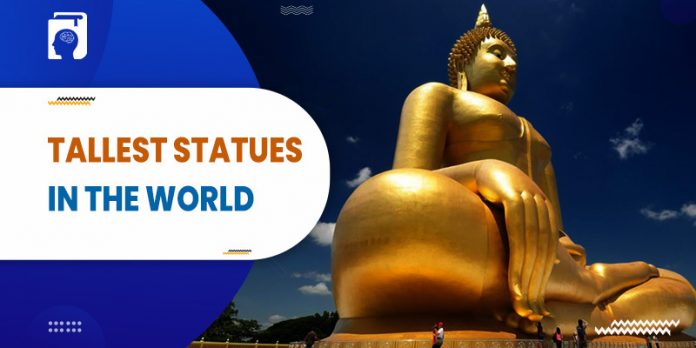 Read on, as we take you on a joyride through the ten tallest statues in the world.

Humans have an obsession with statues. We build them to give vent to our artistic expression, commemorate an event, benchmark our cultural heritage, and more. Statues even have religious significance in some parts of the world.

Humans have another obsession: grandeur. Across the ages, we have built grander and more sophisticated statues than the previous generation. But have you ever wondered who is the tallest of them all right now? Let’s find out.

10 Tallest Statues in the World 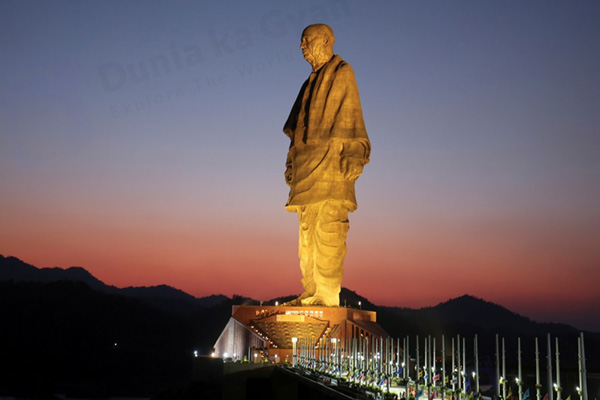 With a staggering height of 183 meters, it’s hands down the tallest of them all. Located in Vadodara, across the Sardar Sarovar Dam, the Statue of Unity commemorates Sardar Vallabh Bhai Patel, an Indian statesman, visionary, and leader of the masses.

Sardar deserves a statue of this magnificence. His legacy extends beyond being the first home minister and first Deputy Prime Minister of independent India. If we see India as it is today, it’s due to Sardar. He was responsible for integrating hundreds of princely states into the current Republic of India. Do we need to explain why they call it the statue of “unity”?

The project was initially announced in 2010, but Larsen & Toubro could begin work on the monument only in October 2013. It was designed by Ram V. Sutar, an Indian sculptor, and unveiled by Indian Prime Minister Narendra Modi on the 143rd anniversary of Sardar Patel’s birth on October 31, 2018. It took five years and INR 2700 crore to complete. 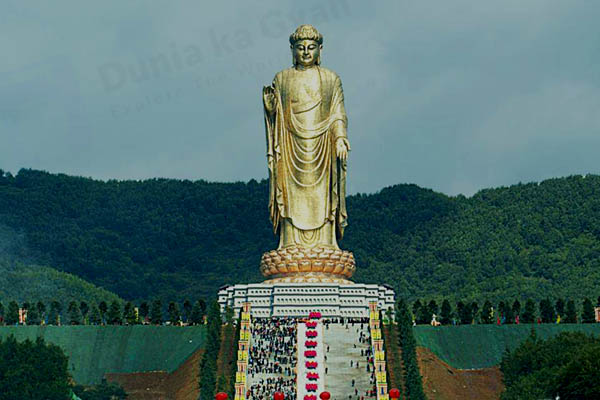 On our journey to discover 10 of the tallest statues in the world, let’s move to China, the site of the Spring Temple Buddha. Nestled in Zhaocun, Henan province, the statue depicts the Vairocana Buddha, which is the primordial state of Buddha. For many, it was erected in response to the destruction of the Bamiyan Buddhas in Afghanistan by the Taliban.

The construction began in 1997 and took 11 years to complete. It involved $55 million in investment and a variety of materials. Think of 100 kilograms of gold, 3300 tonnes of copper alloy, and 1,500 tonnes of steel. The statue has an astounding surface area of over 11,000 square feet, with the lotus seat on which it rests 20 meters high.

The cost is 55 million USD. 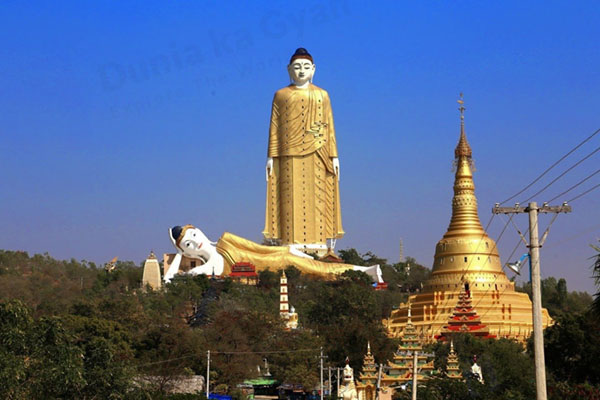 If you think the statue in Spring Temple, China, is the only colossal Buddha statue in the world, think again. Meet the Laykyun Sekkya Buddha statue in the hamlet of Khatakan Taung, near Monywa, Myanmar. Measuring 115 meters vertically, it’s the third on the list of the ten tallest statues on Earth.

The work on Laykyun Sekkya began way back in 1996 and was completed on February 29, 2008. In fact, it briefly reigned as the world’s tallest statue just before the Spring Temple statue sprang up in Sep 2008. The statue accounted for a whopping 35 million USD.

The Laykyun Sekkya depicts the spiritual teacher and founder of Buddhism, Buddha Shakyamuni. Obviously, it’s a site of worship, attracting a deluge of devout Buddhists from across Myanmar and beyond. Yellow is a color associated with wisdom in Buddhism, which is why it is represented on the statue. 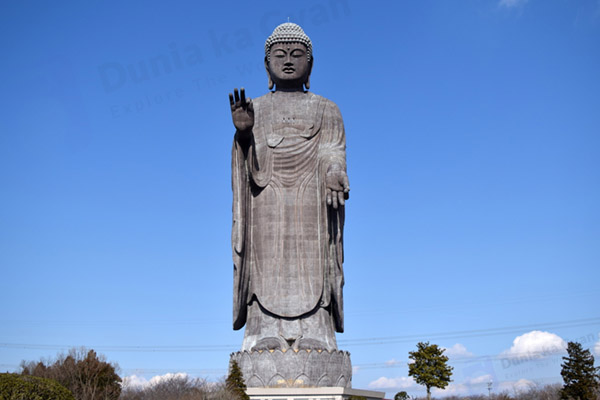 Feast your eyes on Ushiku Daibutsu. It’s a visually pleasing and artistic depiction of Amitabha Buddha, situated in the Japanese city of Ushiku. The statue commemorates the birth of Shinran, the founder of Buddhism’s Judo Shinshu, or “True Pure Land School.”

Standing 120 meters tall, the statue was the tallest of all from 1993 to 2008, until Laykyun Sekkya came along. The 10-meter-tall lotus platform adds to the height and aesthetics of this magnificent bronze statue.

The site has been developed as a tourist attraction. Within the statue, there are four levels, each with different offerings. Savor some lively music on the first level, while the second level is all about scriptural study. Likewise, the third one features over 30,000 Buddha sculptures, and the magnificent gardens await you at the top level.

An elevator facility is readily available for those who avoid walking. 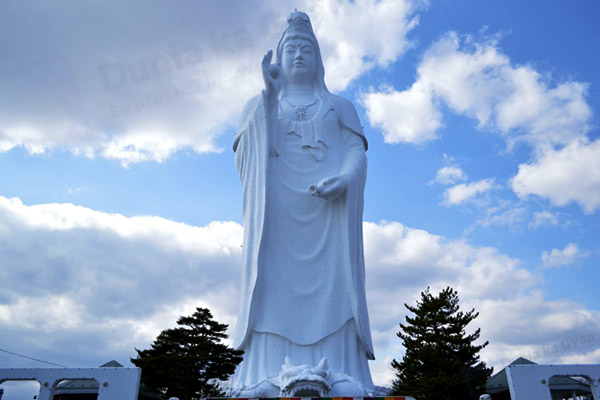 Sendai Daikannon finds itself among the top five tallest statues in the world. The statue depicts the Japanese Buddhist bodhisattva, a goddess who epitomizes the Japanese Buddhist idea of compassion. Seemingly, Buddhists, across geographical boundaries, have a penchant for honoring their religious icons through massive statues.

Sendai Daikannon’s right-hand features a gem, which she uses to grant wishes. And, on her left hand, she holds a flask full of wisdom water. Besides wishes and wisdom, the place also offers some amazing views of the city. The hundred-meter height makes Sendai Daikannon the world’s tallest statue of a goddess. It’s located at the top of a hill in Sendai, hence the name. The location is idyllic, serving as a vantage point for some panoramic views of the city. 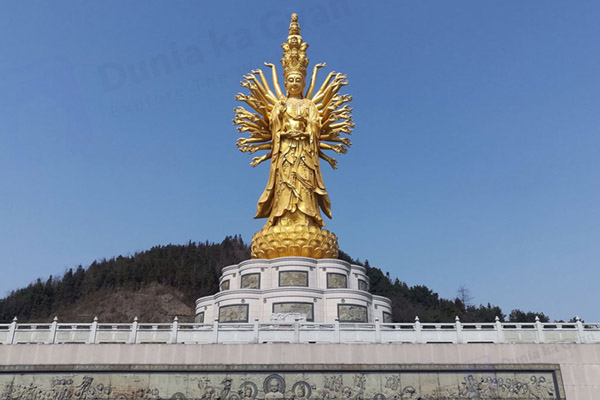 The Guishan Guanyin of the Thousand Hands and Eyes makes it onto the list of the ten tallest statues in the world with its majestic 99-meter height. Besides ranking 6th in the world, it also ranks 4th on the list of loftiest statues in China. The statue is sculpted using gilded bronze, which makes it visually pleasing. Mind you, bringing those intricate details to life is possible only with bronze.

The Guishan Guanyin, erected in Ningxiang, Hunan province, cost 260 million yuan, which was raised by local businesses and religious groups. The sculpture is a manifestation of the Bodhisattva Guanyin, a deity of compassion. She is also referred to as “Shiyimian Qianshou Guanyin,” meaning “Eleven-headed thousand-armed Guanyin.” 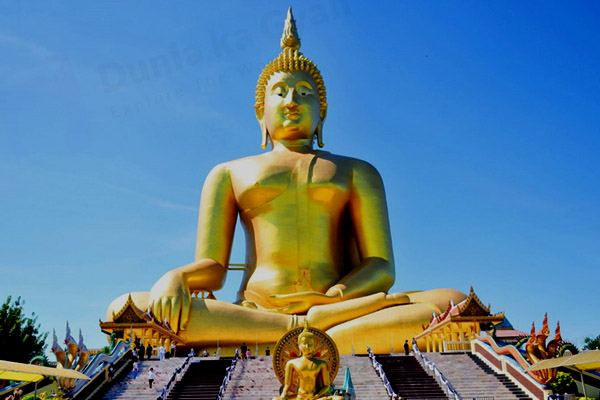 When it comes to the loftiest statues in the world, the Great Buddha of Thailand is placed in seventh place. Known as Phra Buddha Maha Nawamin, the Buddha statue is an imposing presence in Wat Muang Monastery in Ang Thong province. Standing 92 meters tall, it is composed of concrete and painted in a golden hue.

The statue’s official name, Phra Phuttha Maha Navamintra Sakayamunee Sri Visejchaicharn, means “the Lord Buddha of Wiset Chai Chan”. It depicts Lord Buddha standing in the “Calling the Earth to Witness” stance. They erected it in honor of King Bhumibol. 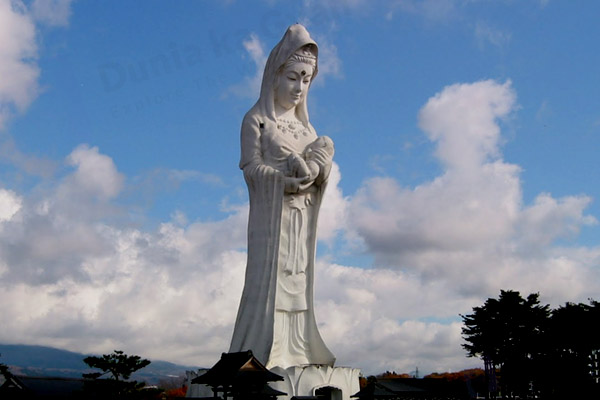 When Dai Kannon in Kita no Miyako Park opened in 1989, it was the tallest of all the statues on the planet. It remained the tallest until losing the record in 1991. In terms of height, it is Japan’s 3rd and the world’s 8th tallest and equals that of the Grand Buddha at Ling Shan. They also call it the Hokkaido Kannon and the Byakue Kannon.

The Dai Kannon in Kita no Miyako Park measures 88 meters and features 20 stories. Eight of them include shrines and places of worship. The platform at the top offers a stunning view of the region. The elevator would take you to each level of the monument. 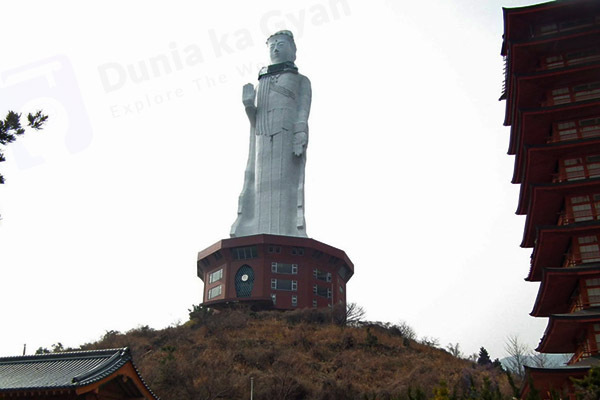 Awaji World Peace Kannon is a vision of Toyokichi Okunai, a local businessman. Using his real estate earnings, he commissioned the temple’s construction in 1982.

In fact, the gate and pagoda are visible even today. The monument is atop a 20-meter-high, five-story structure that also houses a museum, café, and gift store.

The Japanese government acquired the monument and the surrounding land in March 2020. The deteriorating facilities and a suicide attempt from the observation deck in February 2020 created a sense of uneasiness among the local populace. In April 2020, the declaration to dismantle the monument by the end of 2022 was made. 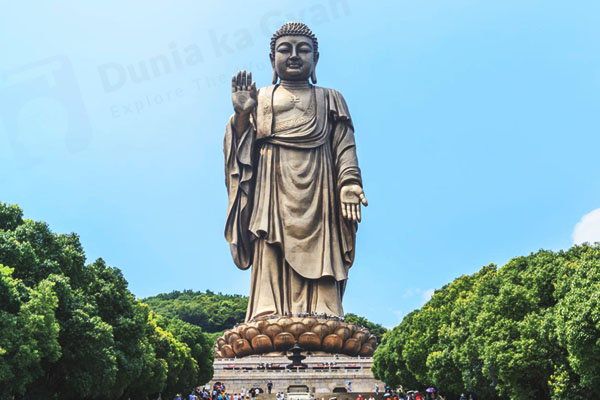 Another Amitabha Buddha statue makes it to the list of ten tallest statues in the world. It’s the Grand Buddha statue in Wuxi, Jiangsu, on the north bank of Lake Tai. The bronze masterpiece is 88 meters (289 feet) high and weighs over 700 metric tonnes. The beautiful lotus pedestal measures 9 meters. The statue has been there since 1996.

People and history are commemorated around the world by magnificent sculptures. In some cases, they are tall enough to be the primary attraction of the city. There you have it, our take on the tallest statues in the world. Thank you for reading the description. I hope you enjoyed it.

Keep an eye on Dunia Ka Gyan for more such content